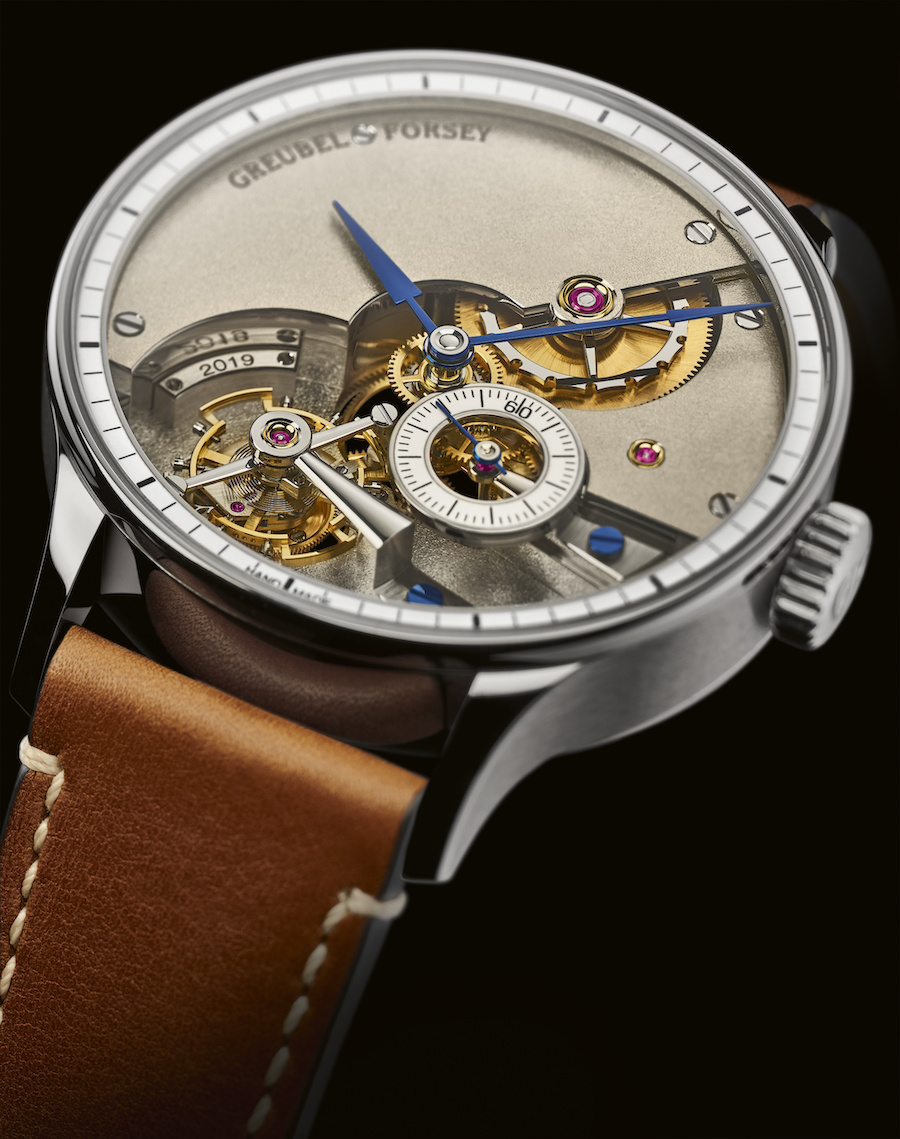 For the first time in more than a century and a half, a new timepiece will be on the market the is totally hand made, with 95 percent of its components carved by hand and using only hand-operated tools. The Greubel Forsey Hand Made 1 almost puts today mechanical watchmaking (with CNC machines and many parts and assembly processes done by robotics) to shame. Almost. Because, let’s face it, if it weren’t for micro-technology, today’s watches would take forever to build and be incredibly expensive — much like in the past.

Case in point: the Hand Made 1.  In order to finally achieve the 308 components for the watch (272 movement components and 36 case parts) that met the high standards of Greubel Forsey, more than 800 components had to be made. Carving minuscule pieces by hand without the aid of computers and machines is no easy feat.  In fact, to make one single watch, an incredibly 6,000 hours of work (equal to three years of man hours) was required.

Additionally, that investment in time, into creating more parts than necessary to uphold strict standards, is an inherent contributing factor to the value/cost of each watch made. As such, no value has yet to be placed on the watch, nor does it currently hold a retail price (often two different things) because most likely that price would be astronomical “even for Greubel Forsey standards.”

However, the Hand Made 1 represents more than just reviving the past arts of hand watchmaking, it is about propelling them to all new heights. It is about creating the most precise, beautifully finished, excellently executed hand-made watch in history. 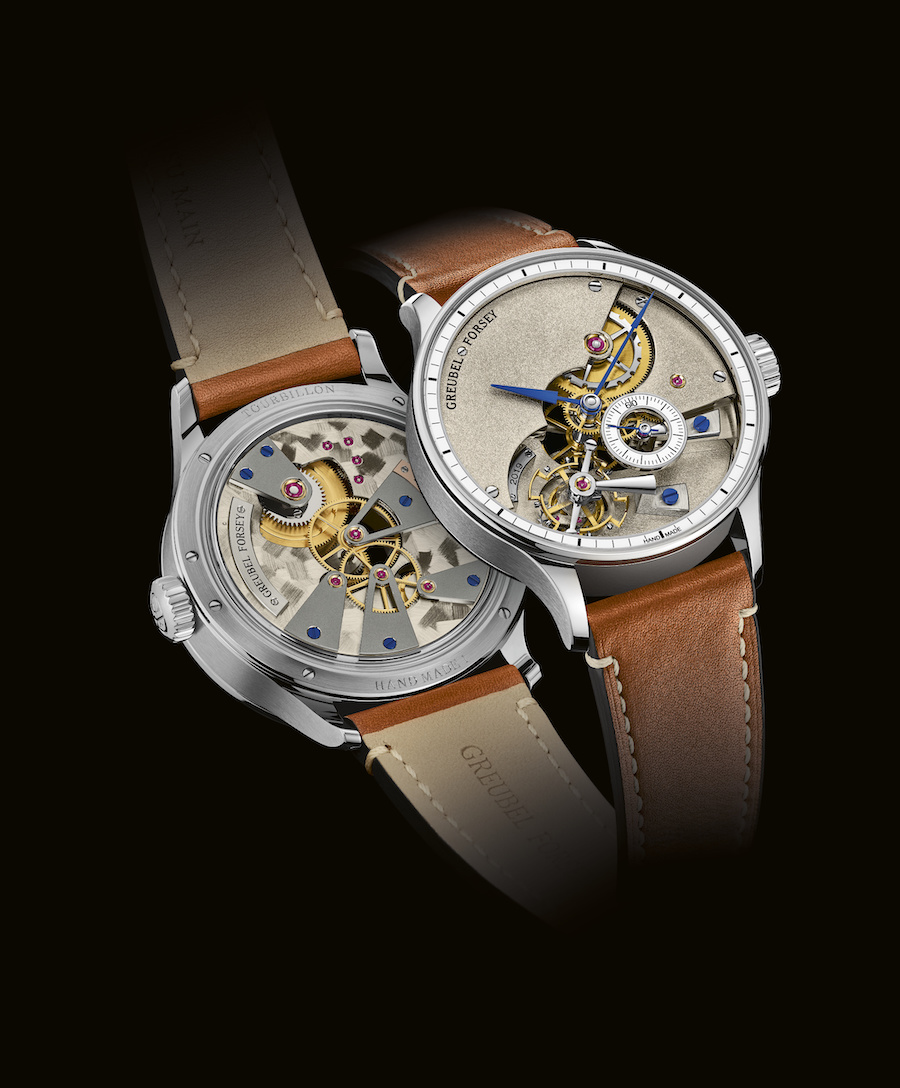 Greubel Forsey Hand Made 1 consists of 308 movement and case components all made by hand (except for some case gaskets and the sapphire crystals).

The Concept Behind Hand Made 1

The making of this watch was a dream in the eyes of Stephen Forsey and Robert Greubel for years. These two pioneers and innovators worked closely with venerable master watchmaker Philippe Dufour, and Time Aeon on the Naissance dune Montre1 adventure to teach the skills from generations past to today’s generation so they wouldn’t be lost in the future. This Hand Made 1 project is an offshoot of that original concept.

Because industrialization and nanotechnology has almost obliterated the specific skills of watchmaking, Greubel Forsey forged forward to reincarnate those hand-craftsmanship talents. The task was to take traditional watchmaking to new standards today — showcasing the highest level of precision and craftsmanship in hand-made watches in the history of watchmaking. 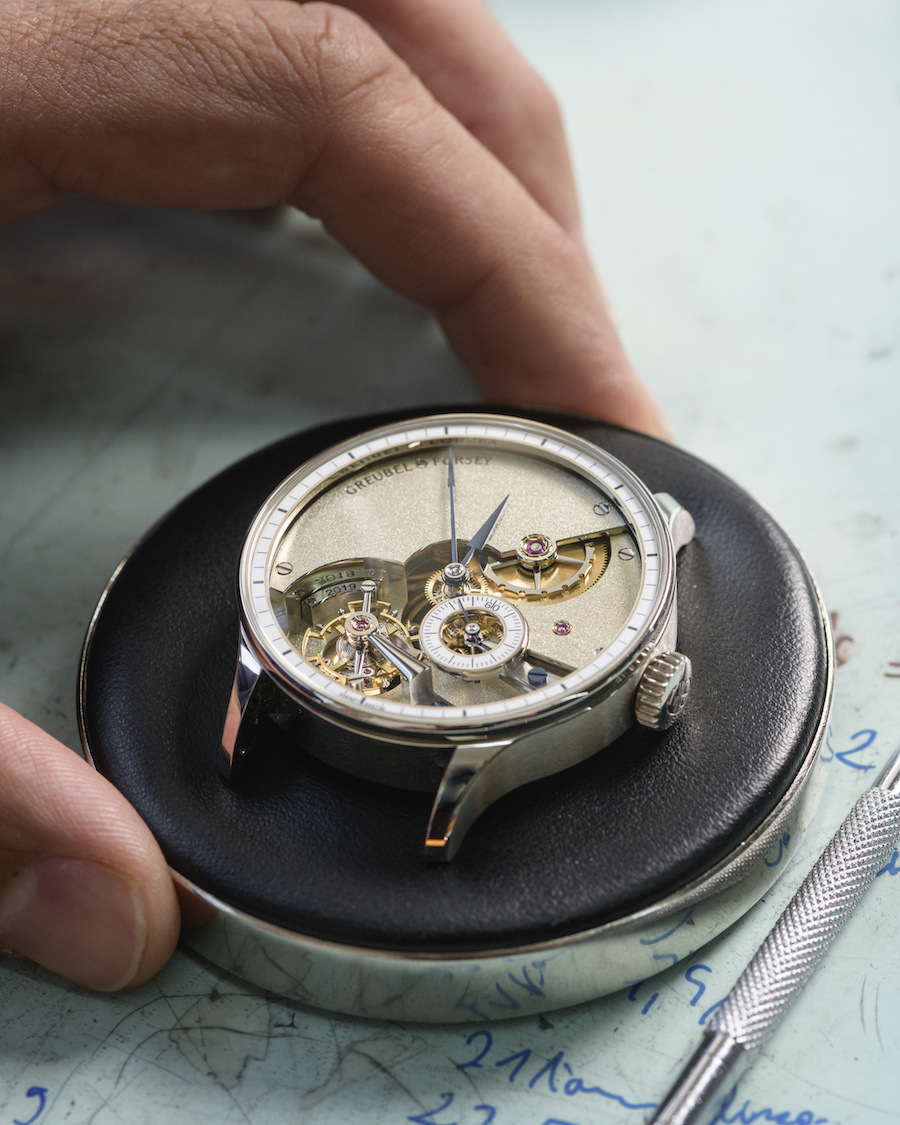 Assembly of the Greubel Forsey Hand Made 1

It is no surprise that this incredible effort comes from independent brand Greubel Forsey. In its short lifetime, this now legendary company has re-invented today’s watchmaking — escalating it to new levels of innovation with watches such as its Tourbillon 24 Secondes, Double Tourbillon 30°, and Quadruple Tourbillon, Art pieces and so much more.

Beginning today, Stephen Forsey is taking the watch on tour — a global tour spanning five contents an across 40 cities. This is a sight no one will want to miss.  In one of his first tours, I will be meeting with Stephen Forsey to get even more of the background story on this watch, and the challenges inherent in its making. I will also be getting hands-on with the watch, photographing it and conducting a formal interview — all of which I will bring to you in November. For now, though, we bring you a brief look at the Hand Made 1. 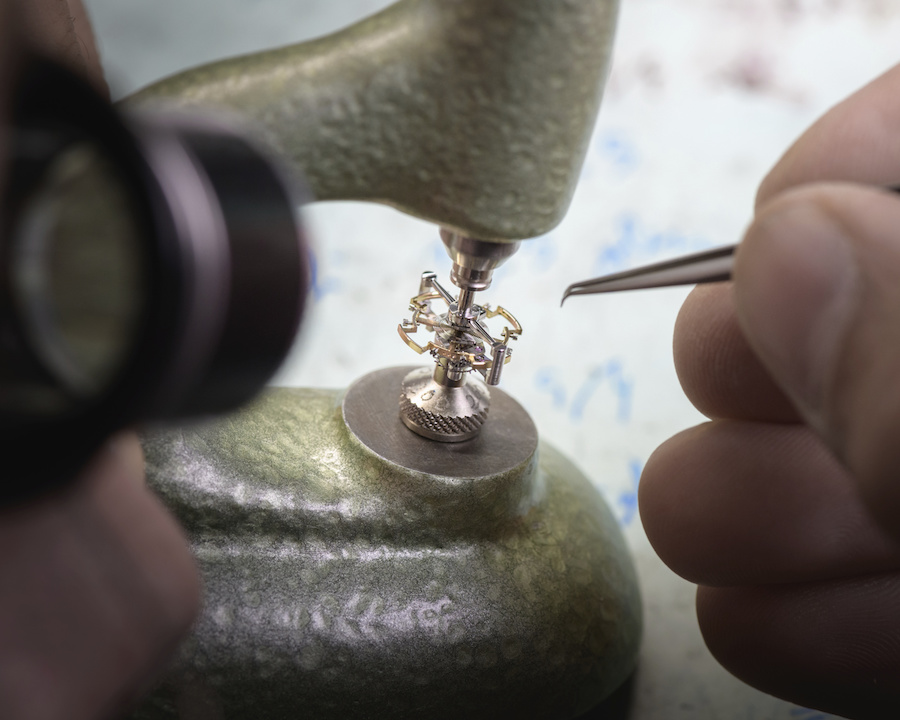 Certain parts of the Greubel Forsey Hand Made 1 needed simplification, while others needed to be more complex.

Challenges in Making the Greubel Forsey Hand Made 1

As mentioned, 95 percent of the watch, including the delicate hairspring, is made using only hand tools. Relying on  “the intelligence of the hand,” to correct tiny details, to pay ever closer attention to perfection to achieve flawless mechanical quality, Greubel Forsey built a special team of the most skilled craftsmen in each field –  combination of many from its workshops and several outside talents to work together.

The hours, minutes , seconds and tourbillon timepiece the has been entirely created from scratch.This required a creative and daring approach to finding technical solutions for the making of some parts and for the sizing them properly to fit within the 43.5mm case diameter (13.5mm thick). In some instances, it was best to simplify the movement and reduce the number of parts, and in other instances, like the tourbillon escapement, the component numbers had to be increased to have each part hand made and yet have it all work together harmoniously. It took almost 35 times longer to make the complete 69-part tourbillon cage than it would take to create a standard high-end tourbillon. A single screw could take up to 12 operations, or eight hours to make. 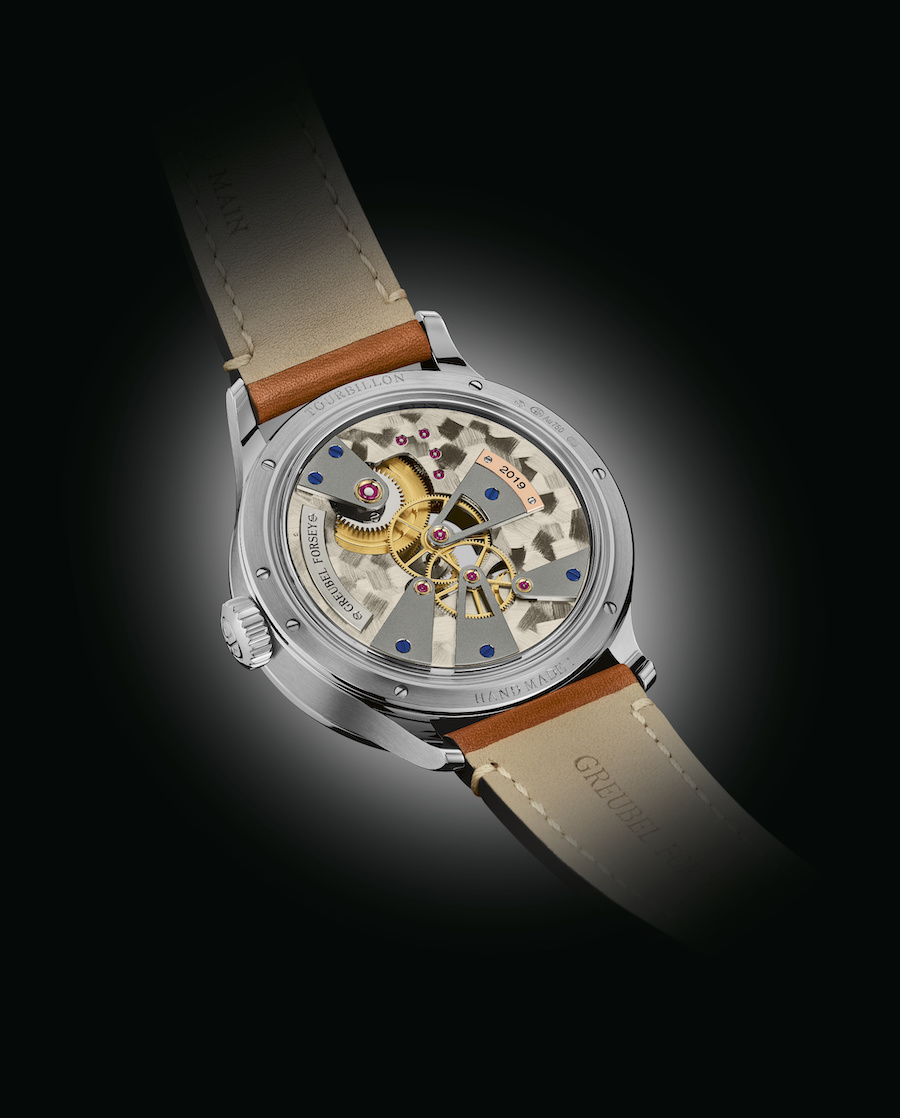 Greubel Forsey Hand Made 1 case back

According to Greubel Forsey, “The same questions were asked at every stage:  How can we design this part to be able to make it using traditional tools or machines such a jig borer or lathe? And which shape can we give it so the artisans’ intelligent hands can ensure extraordinary precision and the finest craftsmanship?”

From caliber to case, dial and strap, the watch slowly came to  fruition.  The only parts on the watch not made by hand are some case gaskets and the sapphire crystals.

Created in 18-karat white gold, the watch represents the essence of Swiss made. However, instead of Swiss Made in the inscription, it reads Hand Made. Greubel Forsey estimates they will make just two, or, at most three, pieces per year. 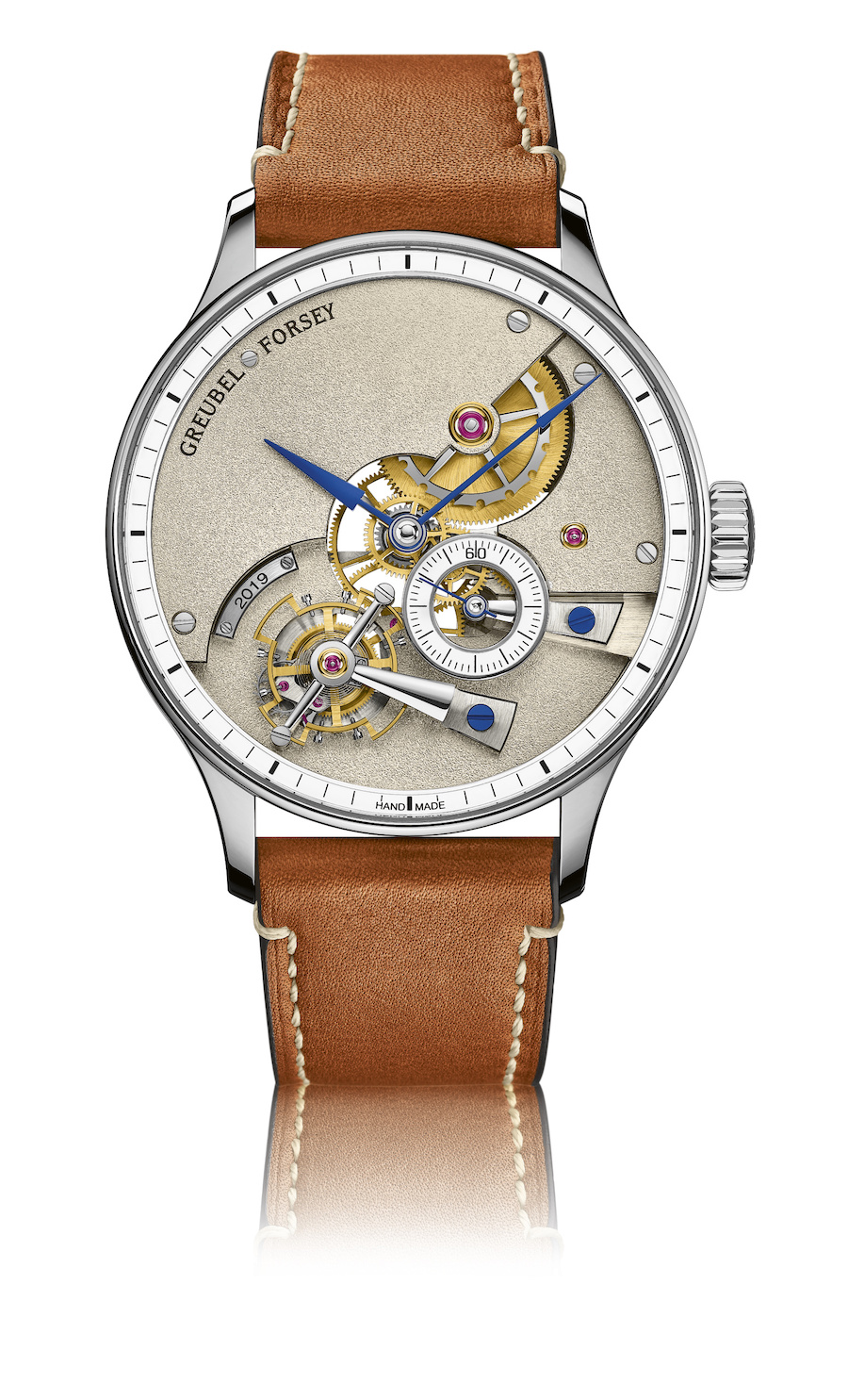