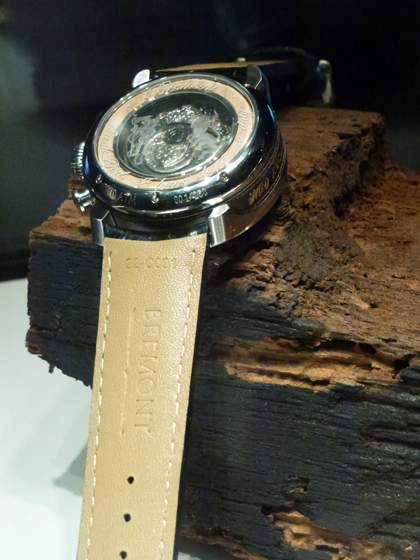 Still the flagship of the British Royal Navy, the HMS Victory was completed in 1765. A warship, she did not see action until 1778, but it wasn’t until 1803 that her most famous captain took charge of her: Viscount Horatio Nelson. Having died on board during the Battle of Trafalgar in 1805, the now dry-docked monument to historic days of adventure is perhaps one of the most revered museum monuments of the British Isles.

The only remaining eighteenth-century ship in the world is located at Portsmouth. Belonging to the National Museum of the Royal Navy, the ship is currently being restored – an undertaking necessitating a great deal of funding. Thanks to their involvement as Royal Navy ambassadors who aid in raising funds for preserving World War II and pre-war naval aircraft, Bremont owners Nick and Giles English have an “in” with the 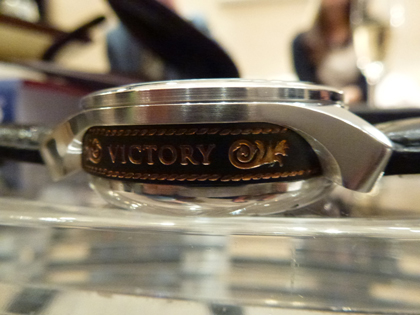 © Worldtempus / Elizabeth Doerr museum’s administration. The brothers’ background in flying and sailing – indeed each of them owns a small plane they take out almost daily – make this a natural fit.

As such, Bremont enhance its first foray into a precious metal timepiece with the addition of something no other watch has: a piece of original Victory oak and copper from six of the ship’s tremendously large nails.  The Limited Edition Victory wristwatch: the Victory Limited Edition. The automatic watch is powered by Caliber BE 83-AR (base Valjoux 7750) enhanced with a chronograph and two retrograde displays (date and seconds) to make it the most mechanically advanced timepiece produced by the brand to date. 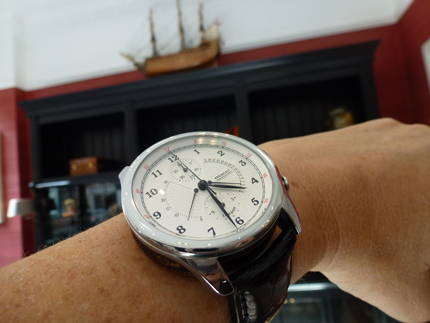 © Worldtempus / Elizabeth Doerr Even more spectacular are the outside accoutrements. The clean dial not only retains its typical Bremont design characteristics, it was directly inspired by Nelson’s own eighteenth-century unsigned pocket watch. However, it is the special elements found on the 43 mm stainless steel or rose gold case that will capture every man’s imagination and directly return him to his childhood dreams of adventure. The case band of the three-part case was created from the melted copper of original nails used in building the ship, each measuring about 1.6 meters (almost 5 feet) in length. Hand-engraved with the word “Victory” and coated with DLC, the case band forms an immediate focal point for this watch, particularly in conjunction with the unique shape of the lugs. Underneath the back bezel, visible through the sapphire crystal is a wooden ring made of finely sliced original oak from the ship. The sapphire crystal protecting the movement also reveals two more interesting features: a gold rotor crafted by Bremont in its Henley-on-Thames workshop, and a sapphire crystal that has been hand-engraved with Nelson’s own seal. The seal, belonging to a patron who has donated double-digit millions to the HMS Victory’s restoration, was used on all of Nelson’s official correspondence and has never yet been utilized for any other purpose. A mold of it was taken in order to be able to engrave it onto the crystal and rotor. The hand-engraving was completed in the U.K. by one of the country’s oldest crystal engravers. Part of the proceeds of each watch, of which 40 rose gold and 250 stainless steel pieces are available, will go directly to the restoration fund for the HMS Victory.