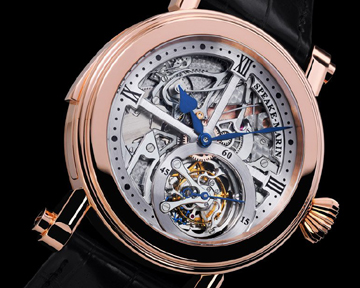 Ok, so if you know Peter Speake-Marin, the visionary British watchmaker with a gentle manner, affable spirit and a classical approach to timepieces, you know that when he builds something he pours heart and soul into it. Such is the case with the beautiful and extraordinary new Renaissance Tourbillon Minute Repeater.

Named Renaissance for a new era in Speake-Marin’s ever moving journey of discovery in the world of watchmaking, the watch encompasses a repeater mechanism that Speake-Marin enjoyed working on in London in his early days. It recalls his previous work, current elements and the always forward-thinking specialty accents. Cased in Speake-Marin’s Piccadilly case with pleated crown, the movement of each watch is hand engraved- making it a piece unique. The 330-part movement was developed according to Speake-Marin’s exacting standards by La Fabrique du Temps, Geneva. It offers a 60-secon tourbillon and a chiming repeater with an all-or-nothing mechanism.  The stunning works are revealed via an open dial and a sapphire case back.  Words can’t say enough about this piece – it is quintessential Speake-Marin.