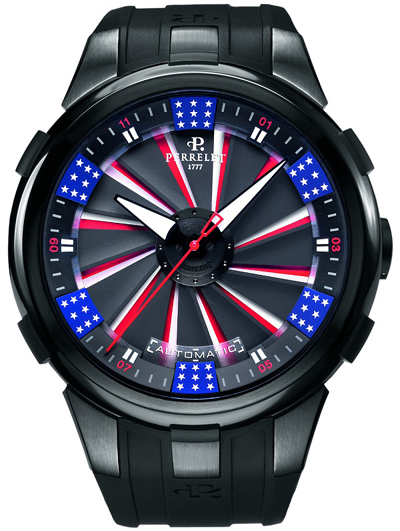 It was in 1868 that Memorial Day was officially proclaimed. Originally, the day was called Decoration Day, and was developed as a day of remembrance in America for those who have died in our nation’s service. It is a day where the American flag runs high – on flagpoles, in cemeteries, in the homes of those who have served and fallen. Having had a father who served in the marines, an uncle who served in the Navy, a father-in-law who served in the army and a host of friends who served in our forces, I am proud to have holidays that honor these men and women.

For true patriots, there is a fine watch to show your colors. Those of you familiar with Perrelet—inventor of the automatic watch back a couple of centuries ago – are familiar with the brand’s famed double rotor watch.  Now, the brand’s Turbine watch features cut-outs in the top-level dial that rotates much like a turbine — allowing for visibility of the lower dial in a motion format that is propelled by the movements of the wrist. The Turbine XL America is a 50mm DLC black coated steel timepiece, whose outer bezel has blue sections with 50 stars. The lower spinning dial, or turbine, features red and white stripes, for a Grand Old Flag look. It retails for approximately $7,000.