This time last summer, the Plastiki catamaran – made of 12,500 plastic bottles — and its 10-person crew was coming to the end of a 4-month-long epic voyage across 8,000 nautical miles of the Pacific Ocean, when it sailed into Sydney Australia’s Maritime Museum amidst a crowd of family and supporters. Making history with the Plastiki was IWC watch — a staunch supporter of the expedition and global consciousness.

The Plastiki boat, made plastic bottles and recyclable thermoplastic polymer, and powered by solar panels, wind and bicycle generators, was the brainchild of David de Rothschild, whose goal was to draw attention to the devastating consequences of plastic pollution in the world’s oceans.  He also hoped that people will think with vision, as he has, 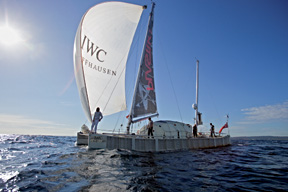 and consider new ways to use recyclables.  IWC, Schaffhausen – one of the first Swiss watch brands to really go carbon neutral — was the proud supporter of Plastiki and official partner of the expedition and all it accomplished. At the time, the brand created a special watch that was sold with proceeds going to benefit the cause.

Now IWC boldly commemorates the mission with the introduction of the Ingenieur Automatic Mission Earth Edition “Plastiki” watch. Created in a limited edition of 1,000 pieces, the riveting chronograph has been put through more than 30 grueling tests to verify it as an adventurer’s watch. The stainless steel case is water resistant to 12 bar. The watch houses the self-winding IWC-manufactured 80110 caliber with soft iron inner case to protect again magnetic fields. It also is equipped with an integrated shock-absorption system. The back engraving commemorates the Plastiki expedition with the sea route from San Francisco to Sydney depicted on the caseback. The watch is finished with a blue rubber strap. The magnificent, robust blue Ingenieur retails for $8,200.