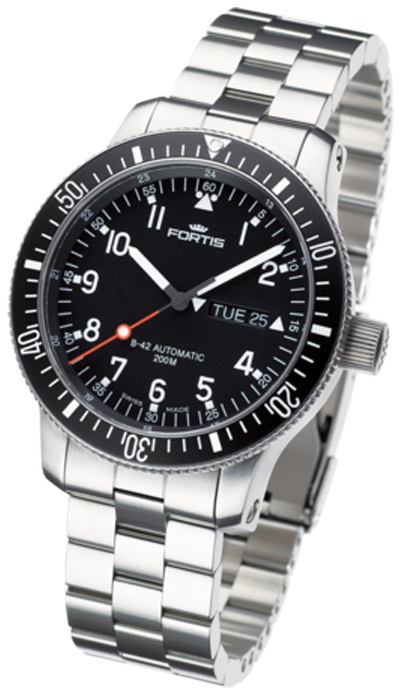 As the American Space Shuttle Atlantis flight STS-135 voyage comes to a close this week, it also closes a chapter on US space missions, as it is the final NASA-planned manned space mission. From now on, manned space missions to the ISS will be operated by the FSA in Russia, with its new director, Vladimir A. Popovkin. This 28th ISS Crew currently in orbit operates different science experiments and takes care of the maintenance and repair of the ISS. Alexander Samokutyayev, who has been on the ISS since April, oversees the Russian long-time experiment called Uragan, by documenting the different changes on the surface of the Earth with photo- and video equipment especially after natural catastrophes like hurricanes, but also the changes made by mankind.

Fortis has been building Spacematic watches since the beginning of the 1960’s in the space era. Fortis watches are distinctive, highly legible, functional and robust. This B-42 Official Cosmonauts Day/Date Automatic watch houses a Swiss 25-jewel movement and beats at 28,800 semi-vibrations per hour. It is equipped with an Incabloc shock absorber. The two-part 42mm stainless steel case is equipped with a unidirectional turning bezel with 60-minute scale, luminous capsule at 12:00 and a sapphire crystal with anti-reflective coating on both sides. It is water resistant to 200 meters and individually numbered. While you may not be travelling into space, it’s nice to know your watch is equipped to do so, and for just $2,250 retail.