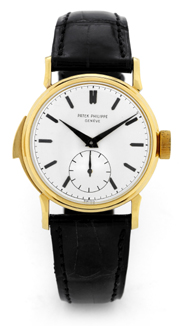 Patek Philippe Ref. 2419Yes, if you are the consummate watch collector, the upcoming March 10th Antiquorum New York auction is for you. A couple of really amazing timepieces are coming up for grabs – but beware- these babies are pricey and are certain to fetch global interest. In fact, I know a certain Kuwait collector who is definitely in the market for one of the top three lots.

So, for the not-so-feint-of-heart bidder, key watches to look at include the  unique Patek Philippe ref. 2419 minute repeater wristwatch, which originally retailed by Cartier in 1950.  The 18-karat yellow gold watch was commissioned by a NYC businessman and was not even recognized to be in existence until now. It has some very special features (including an oversized repeater slide and crown) and is estimated to sell for between $300,000 $500,000.

For those who love the Westminster chimes, you may prefer the beauty of the Girard-Perregaux Opera Two Tourbillon, Westminster Minute 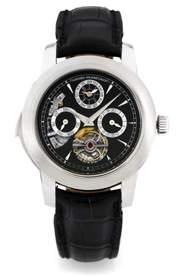 A tourbillon a little more up your ally? Well, there is a platinum Jaeger-LeCoutlre Reverso GyroTourbillon going up on the block.  Estimated to sell for $220,000 to $270,000 this magnificent piece was originally made just two years ago in a limited edition of 75 watches.

JLC Reverso GyrotourbillonFor those who want something a little more “affordable,” this auction also offers a rare 1961 Rolex (estimated at $30,000 to $50,000), and a few other goodies. Register early (http://www.antiquorum.com/how-to-buy/) to bid on line if you can’t be in NYC that day.