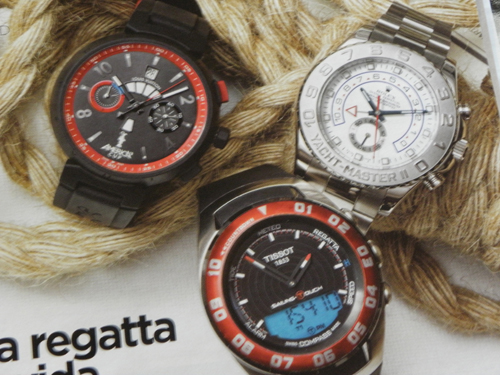 It’s almost upon us — the season for sailing, yacht racing and enjoying the great oceans that surround us. This summer a wealth of great regatta races abound – some are even preliminary races for the 34th America’s Cup races that are finally coming back to US waters in 2013. For skippers commanding some of the fastest boats in the world, accurate timing is essential.

Over the centuries, man has perfected the art and craft of building faster, stronger, better boats. Similarly, the art of building precision watches has progressed so that now some of the finest watch brands in the world offer yacht racers regatta countdown timers right on the wrist.  Sharing a passion for excellence on the water, skippers turn to the most high-tech materials and most exceptional maneuvers as they look for function and performance out of their boats and their timepieces. What’s more, watch brands don’t disappoint – offering great new regatta timers.

Additionally, brands such as Rolex (title sponsor of multiple important regatta races) and Panerai, which sponsors the Panerai Classic Yachts Challenge, love sailing. Panerai is even a founding company in the Sailing Heals charitable foundation for cancer patients, that was formed in Boston last year. (Portions of this trend report ran in the May issue of Boston Common Magazine.)