Perhaps taken for granted, the phrase, “just in the nick of time” is one with real meaning behind it. We regularly hear of rescues at sea – -but we don’t typically hear about the timepieces behind those events. In 1997, the crew of the Mata-Rangi expedition, on a reed raft en route from Chile to Polynesia, met with disaster when they encountered a storm and their raft was sinking. Without radio contact for days, the crew was equipped with Breitling Emergency watches (with a transmitter built in that broadcasts a distress signal to rescuers) and all were saved thanks to this highly technical timepiece.

Today’s maritime watches are functional, precise instruments that offer a lot more than the time and are meant to withstand the toughest elements.  The first truly water-resistant watch came about in 1927 when Mercedes Gleitze swam the cold waters of the English Channel for more than 10 hours wearing a Rolex watch. She and the watch emerged functioning fine. That watch was named the Rolex Oyster. More than three decades later, another Rolex was strapped to the hull of the bathyscaphe Trieste, which ventured to the deepest point of the world ever visited – the Mariana Trench. The Trieste went down 35, 798 feet with the specially made Rolex attached to it. Again, the watch emerged working fine. Over the years, a host of top brands have built watches for elite corps. Panerai — Royal Italian Navy with watches; Tutima — NATO; Jaeger-LeCoultre — the Navy SEALs; etc. 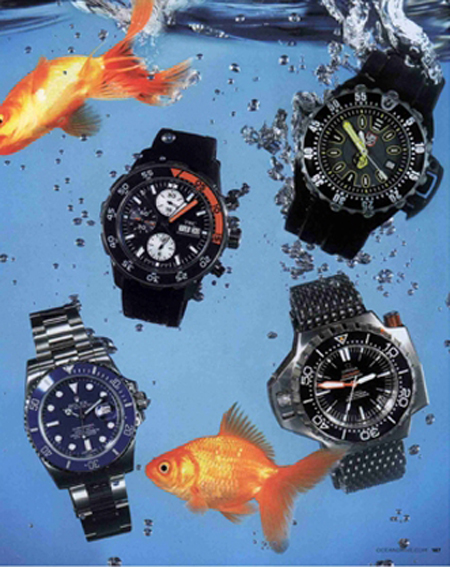 photo by Kenji Toma Dive watches should be water resistant to at least a Diver’s International Organization for Standardization (ISO) rating of 200 meters to 300 meters.  Often dive watches are COSC-certified chronometers (watches that have undergone rigorous testing in various positions and under different conditions of pressure, temperature, depth and gravity, usually by the Controle Official Suisse des Chronometres (COSC) observatory over a period of time).

Most watches are also equipped with a features (sometimes patented)  such as double- or triple-locked winding crowns, additional gaskets for water resistance, helium escape valves, silicone O rings, extra large crowns, graduated one-way rotating bezels that click into place and measure elapsed time under water, and double-locked bracelet clasps. Some dive watches indicate bottom time, measure elapsed time, have an alarm function that can be sensed under water and even come with interchangeable bracelets or straps with extensions so the watch can be worn over the wet suit. Color also plays a role in diving, but only to limited depths. Red and orange disperse first, typically at a depth of about 30 feet, when these colors turn gray. Yellow lasts longer and blue is the color that says visible the longest- to depths of 200 to 300 feet before they are not readable. Luminescence is therefore key. (Portions of this article appear in Niche Media’s Ocean Drive and LA Confidential this month.)