Patek Philippe is known for unveiling amazing new pieces here at BaselWorld and this year is no exception. While it focuses strongly on women’s watches this year — to be covered in detail shortly — the brand has an acute sense of complexity for men this year, as always. 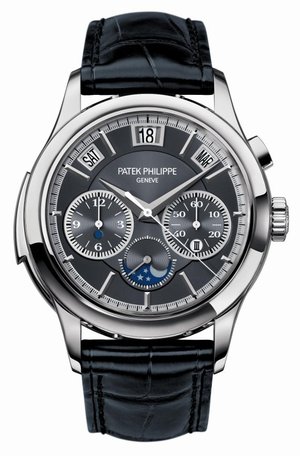 Actually, Patek Philippe releases, among other things this year, six new Grand Complications – making it a truly exceptional year for collectors around the world. Shown here is the Ref. 5208 Triple Complication with minute repeater, chronograph, and instantaneous perpetual calendar with aperture displays.

It is the first Patek Philippe wristwatch with this combination of functions, yet it remains easy to use and to read. The column-wheel chronograph is a mere 2.4 mm thick, the perpetual calendar features large aperture displays that advance simultaneously and instantaneously every day at midnight. The watch houses the complicated caliber R CH 27 PS QI, composed of 701 individual parts. The case is a classic Calatrava style in platinum, with a sapphire-crystal back.

This watch ranks second on the brand’s most complicated wristwatches list, right after the Sky Moon Tourbillon. It is the first Patek Philippe Triple Complication with a chronograph and also one of the very rare highly complicated watches that are self-winding. Additionally, it is the manufacture’s first genuine Grand Complication that integrates silicon-derived Silinvar® components: the revolutionary Pulsomax® escapement and the Spiromax® balance spring – an impressive blending of innovative technology and centuries of craftsmanship. This is one you won’t want to miss – get on the waiting list now!