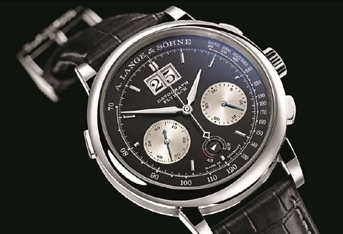 I remember well the day that A. Lange & Sohne’s top executives unveiled to the world – and showed me in person — the brand’s Datograph – the quintessential chronograph. It was in 1999, not long after the brand had made the decision to re-enter the market after the reunification of Germany. It was a moment that was wonderfully exciting, as the Datograph offered technical features, harmonious dial and superb German watchmaking – all in a chronograph with 60 hours of power reserve and a proprietary oscillation system.

Now, the newest Datograph AUF/AB – slated to be shown to the world in Geneva in January at the SIHH show – shines in a large 41mm platinum case. The watch houses many of the same attributes that made the first Datograph, and those subsequent to it, a global success: classic column-wheel caliber with a precisely jumping minute counter, flyback function, and large outsized date united with an exemplary chronograph with bright subdials. Additionally, the engineers at Lange have further refined the watch, adding hour markers instead of Roman numerals to emphasize its clear design.  The watch is powered by the Lange Manufacture caliber L951.6 manually wound movement – made according to Lange’s strict quality standards. The movement consists of 451 pars and 46 jewels, with bridges and plates made of untreated German silver—exceptional quality. The meticulously finished movement is visible via a sapphire crystal caseback. This is one watch I personally look forward to seeing in up close … Stay tuned.