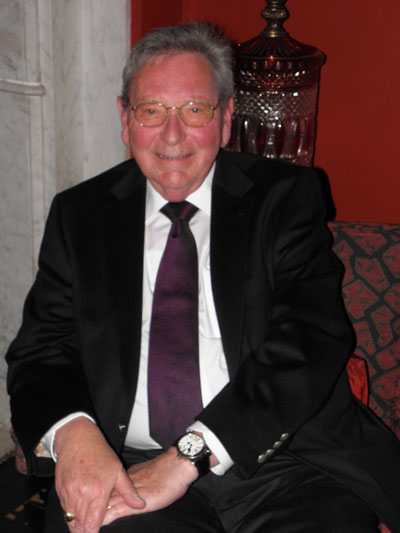 As a young boy living in a quiet village in Switzerland, Roger Dubuis was tasked with helping the local cobbler ring the church bells on Sunday morning. Little did anyone know that this important chore would change his life forever.

Every week, he would walk to the church tower and climb hundreds upon hundreds of steps to reach the church bells. Tired during his climb, he would often rest on the level of the tower where the clock mechanisms and inner secret works were. He studied the mechanisms, and soon became enthralled with the mechanics of time.  There – in the tower — at the young age of 13, Dubuis resolved to become a watchmaker.  He pursued that education just a few years later and has, indeed, become a master watchmaker of much note — responsible for a host of creations and visionary innovations.

Yesterday, at Atimelyperspective.com had the wonderful opportunity to talk at length with Roger Dubuis. It was a great pleasure for me, in particular, as I was there when Dubuis founded the brand that bears his name and launched his first complex watch collection in 1995.  Prior to that launch, Dubuis had spent 8 years  with a top watch brand, another 14 years with Patek Philippe, and another 15 years  indulging in restoration and other projects on his own. He launched the Roger Dubuis brand in 1995 with then-partner, designer Carlos Diaz. The first watches introduced were technically sophisticated pieces with powerful aesthetics. 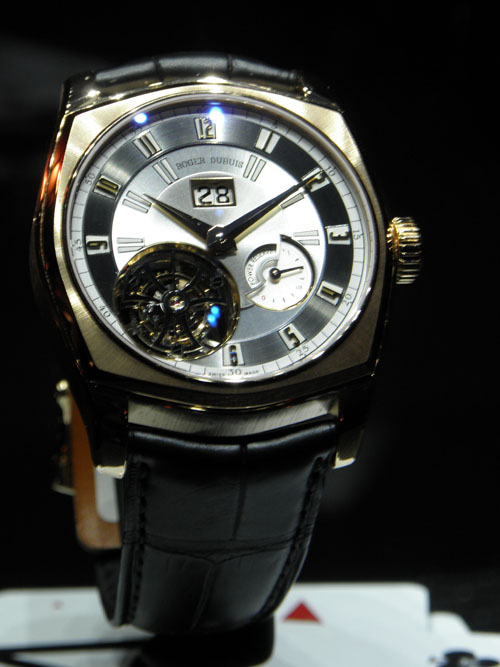 They not only wowed watch collectors with their strength of character, but also with the incredible hand craftsmanship and technological vision.  In fact, Dubuis founded the brand on a single directive – securing the Poincon de Genève – the hallmark of the city’s watch heritage – for all of its timepieces.

Today, the Roger Dubuis Manufacture, owned by the Richemont Group, is a fully integrated manufacture that creates every single part (hairsprings, screws, and all) of every watch in house. The Manufacture prides itself on continuing in the footsteps of Dubuis’ founding principles: Every watch must bear the Poincon de Genève seal – requiring intense hand work. As such, despite the fact that the Manufacture employs more than 160 watchmakers and another 100+ artisans, it turns out just 4,500 finished watches annually. Because of the strict hand-finishing work required by the Geneva Hallmark rules, the price of every Roger Dubuis watch increases by approximately 40 percent over a nicely decorated watch that does not hold the Geneva Hallmark. Still, these masterpieces are much sought after. 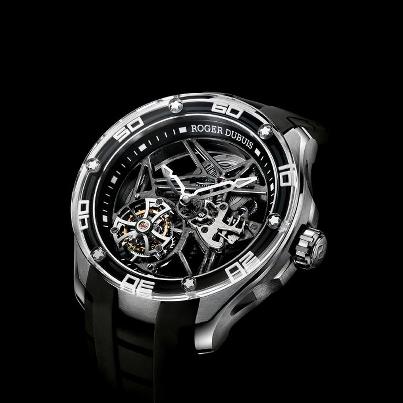 Pulsion Skeleton Flying Tourbillon While Dubuis left the company for a variety of reasons back in 2005 and pursued different watchmaking projects, including work on the first Maitres d’temps piece, he rejoined the brand in October of 2011 as its natural ambassador. This week marked the first time, interestingly enough, that Dubuis ever visited New York – and it was great to re-connect and get his view on where the brand may be going.

Perhaps a name change? Dubuis says he went to see the Philharmonic Orchestra perform and was struck by the magic created there. “There was a portion where the musicians each played a special solo, the repetition of music on different instruments. It reminded me of watchmaking at our Manufacture … one master and all the watchmakers finding their own ways to express themselves, resulting in pure beauty,” describes Dubuis. “Perhaps we should call our manufacture the ‘Orchestra of Roger Dubuis.’” 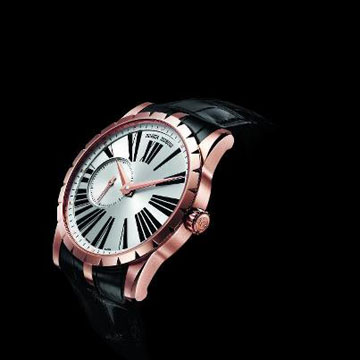 Despite his six-year hiatus from the brand, Dubuis gladly returned and says he was pleasantly surprised when he came back to see that his mandate of top-quality watchmaking had been followed to the letter.

“Coming back was like a reward for me, and I took great satisfaction when I saw that they had continued to pursue my dream and the goals I set out from the beginning — goals of quality and craftsmanship. We have the right people in place; we have the right direction in terms of quality and have sustained all the fundamental ideas of watchmaking heritage without losing any DNA of the brand,” says Dubuis. “We will continue in this manner – but with a few surprises coming soon.”

Among the changes:  the advent of a micro rotor. “Because the hand finishing on every piece is so exquisite, a micro rotor makes sense – it lets the beauty become visible,” says Dubuis. In fact, the making of a double tourbillon takes 1200 hours to build – and approximately one quarter of that time — 300 hours — goes into the hand decoration of the movement.  The micro-rotor enables the wearer to view that beauty. Almost all of the calibers will begin to incorporate the micro-rotor concept.

Additionally, the brand promises something special – truly Dubuis-esque – to be unveiled at the January 2013 SIHH. But don’t expect to see it anywhere else – while the Roger Dubuis brand may be owned by the Richemont Group, Dubuis says the brand is NOT sharing its knowledge, expertise or technological advancements. “We need all the capacity to ourselves to simply complete the watches we are already building. We need all the capacity to grow and create more incredible watches.”