On May 24th, in New York City, at the Breitling boutique, Breitling and astronaut Scott Carpenter celebrated the 50th anniversary of his first lift off into space. Scott Carpenter, pioneer of modern exploration, has the unique distinction of being the first human ever to penetrate both inner and outer space, thereby acquiring the dual title Astronaut/Aquanaut. He was chosen as one of the “Original Seven” Mercury astronauts, and on April 9, 1959 was assigned to the Manned Spacecraft Center (then Space Task Group) at Langley Field, Virginia.  On May 24, 1962, Carpenter lifted off aboard the spacecraft he dubbed Aurora 7 sitting 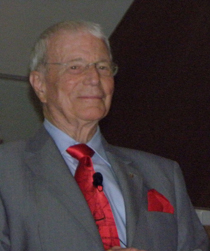 atop the Mercury-Atlas 7 rocket. His spacecraft attained a maximum altitude (apogee) of 164 miles and an orbital velocity of 17, 532 miles per hour. His primary goal during the three-orbit mission was to determine whether an astronaut could work in space, a major stepping stone towards a lunar landing. Here, the now 87-year-old Carpenter shares his thoughts on space and time.

What was your reaction when you were chosen as one of the original seven Mercury Astronauts?

It was the proudest day of my life. I knew the stakes; they told us that they wanted volunteers for the first space flights—men to ride ICBM rockets. … I always worked hard at being the best aviator that I could be and I thrived on training. When you love what you do, you love the training. The investigation and selection process was challenging, but it was a good measure of how well I had done my work in the years that led up to my flight. I was proud of my physical and mental abilities. I was proud to be one of the original seven and in a world consumed by the Cold War, I was proud of my new opportunity to serve my country.

What was your first impression when you reached “space”?

I was consumed by work inside the spacecraft; I didn’t have much time for impressions. However, the view and the weightlessness were unavoidable. I had an astonishing view of the home planet. I saw the continents and oceans. I saw the wake of big ships but not the ships themselves. Over the Sahara I saw white clouds and their black shadows tightly interlocked. It confirmed that I was a long way away.  Before the flight, people told me about weightlessness, but my first-hand experience of it was startling. I enjoyed it because I had worked long and hard to experience it. The dramatic visual and physiological effects of being in space made it a marvelous experience.

How did your discussions with Breitling lead to the development what is now the Cosmonaute?

Before our manned flights we visited Mercury Control Systems around the world. In Australia, I went to a tracking station with some Australian pilots and one of them was wearing a Breitling Navitimer, a watch with a unique feature—a circular slide rule. My NASA responsibilities included navigation and communication, so I suggested to Breitling that if they could change the Navitimer dial to show 24 hours, and eliminate the tachymeter dial, it would make a perfect backup timer and calculator for the American astronauts.

A few days before my flight, Breitling sent me a Navigator, redesigned to the specifications mentioned above, but with the word ‘Cosmonaute’ on the dial instead of ‘Navitimer.’ …It provided backup timer and calculator functions for the flight. As every engineer knows, two or three backups are essential to the success of every mission. I was also very proud to show my comrades the watch I had helped design.

What do you think about Russians and Americans working side by side today in Space?

We are no longer adversaries, but instead we are comrades. The competition has turned into cooperation and that’s a good thing. We will be able to accomplish more this way.