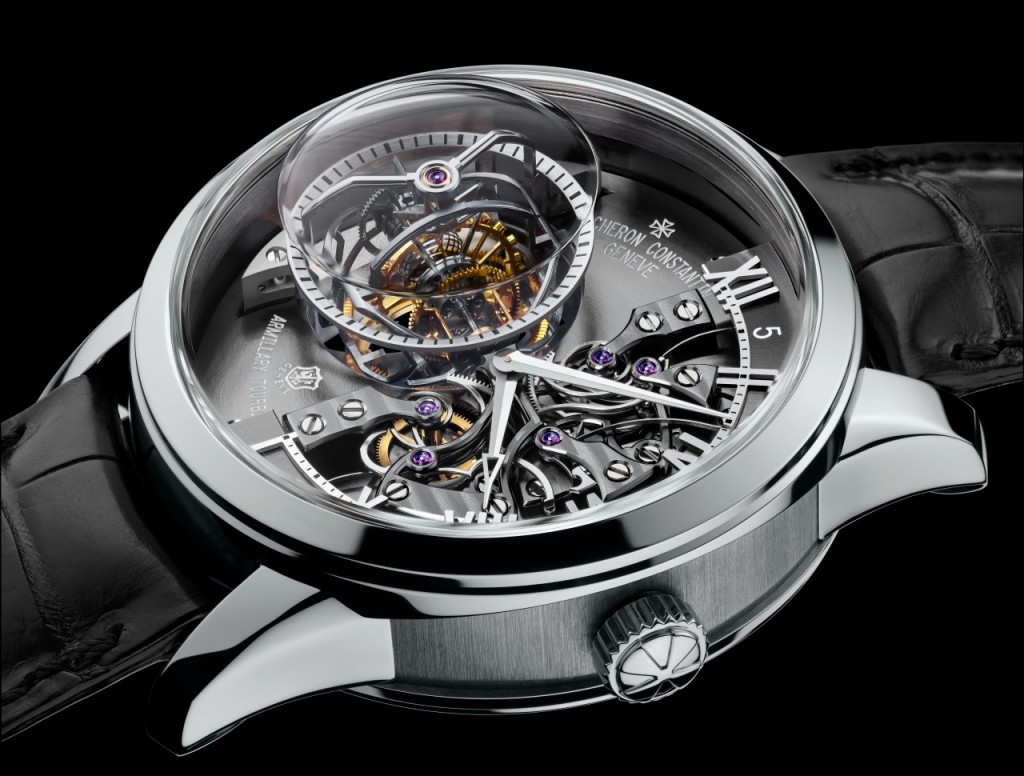 Recently on our Perfect Timing column on Forbes.com, we introduced the world to the new Vacheron Constantin Maître Cabinotier Retrograde Armillary Tourbillon watch, housing the all new Caliber 1990.

Inspired by the Vacheron Constantin  Ref .57260 — the world’s most complicated watch that was eight years in the making and carried a retail price of about $8 million– this new timepiece is also a unique piece  and is also a double sided piece. However, it is a wristwatch, not pocket watch, and it was not designed for  a specific collector as was the Ref. 57260. It does, however, have four patents pending and marks the brand’s first wristwatch with armillary sphere shaped tourbillon escapement.

The one-of-a-kind watch is a  45.7mm white gold timepiece and houses the manually wound movement  that offers  armillary tourbillon and a double retrograde indication. As we noted on our Perfect Timing column, the Armillary Tourbillon, is a spherical shaped tourbillon with rarely used spherical balance spring. It rotates on two axes beneath a sapphire dome at 9:00. Its shape is based on an armillary sphere inspired by those used in an 18th century astronomical clock. The rotation of the aluminium alloy tourbillon cage can also be seen from the side of the watch thanks to a sapphire crystal opening on the case. 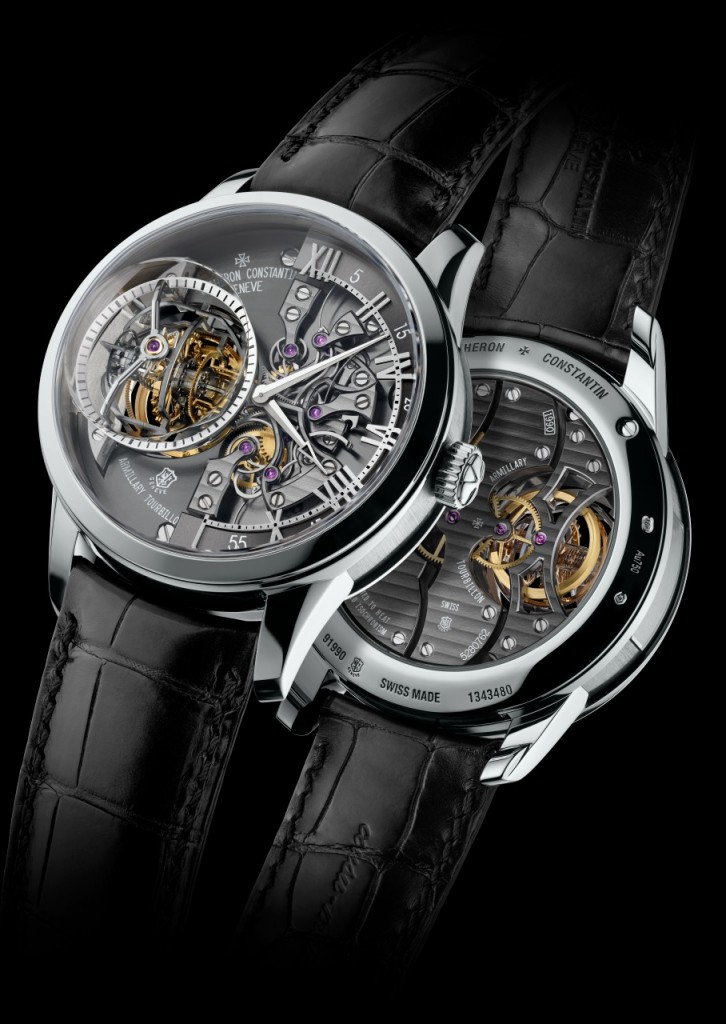 The Caliber 1990 has 299 parts and four patents pending

Additionally, the retrograde hours and minutes indications have an instant flyback function, meaning that the hands that mark the hours and minutes are continually moving – marking the time and then flying back to zero when they’ve reached their end point to start their journey again. In order to facilitate this constant lightning-fast motion, not only are there a host of special gears and wheels inside the caliber, but also the hands are made of titanium.

The high-precision movement is fitted with an escape wheel and lever in silicon with diamond pallet stones – giving it a longer life and strong resistance to wear and tear. The  hand finishing and chamfering of the 299 components required more than 130 hours of work, attesting to the superb craftsmanship that earns this watch the Poincon d Geneve. 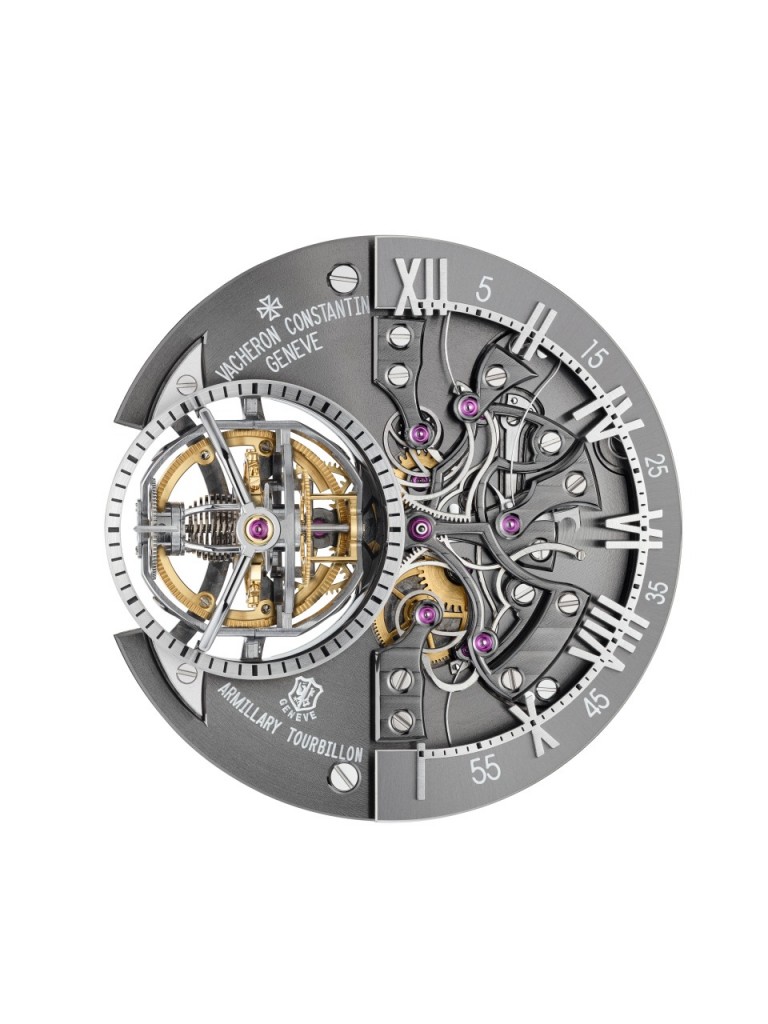 Calibre 1990 carries the Hallmark of Geneva

What is also incredibly intriguing are the four patents pending for the inventing Caliber 1990. As explained by Vacheron Constantin, those patents are filed for:

If we didn’t lose you there, here are the other three patents filed:

The collet for a balance and spring regulating organ — fixing the spring to the balance staff is made in lightweight titanium to improve the isochronism of the balance. Titanium’s weight and volume match those of the other materials in the regulating organ, making the collet ideal for use in a tourbillon.

The tourbillion is made up of two carriages, one inside the other. As they rotate they form a Maltese Cross every 15 seconds. The tourbillon has a Vacheron escapement and sprung balance. The escape wheel is made of silicon with a diamond-like coating, while the diamond pallet stones have a very low coefficient of friction.

The silicon lever can be fitted with movable pallet stones so that the watchmaker can adjust them as in a conventional pallet lever. The diamond coating of the lever makes it stronger and more resistant to wear, while the friction between the fork and impulse pin is markedly reduced. 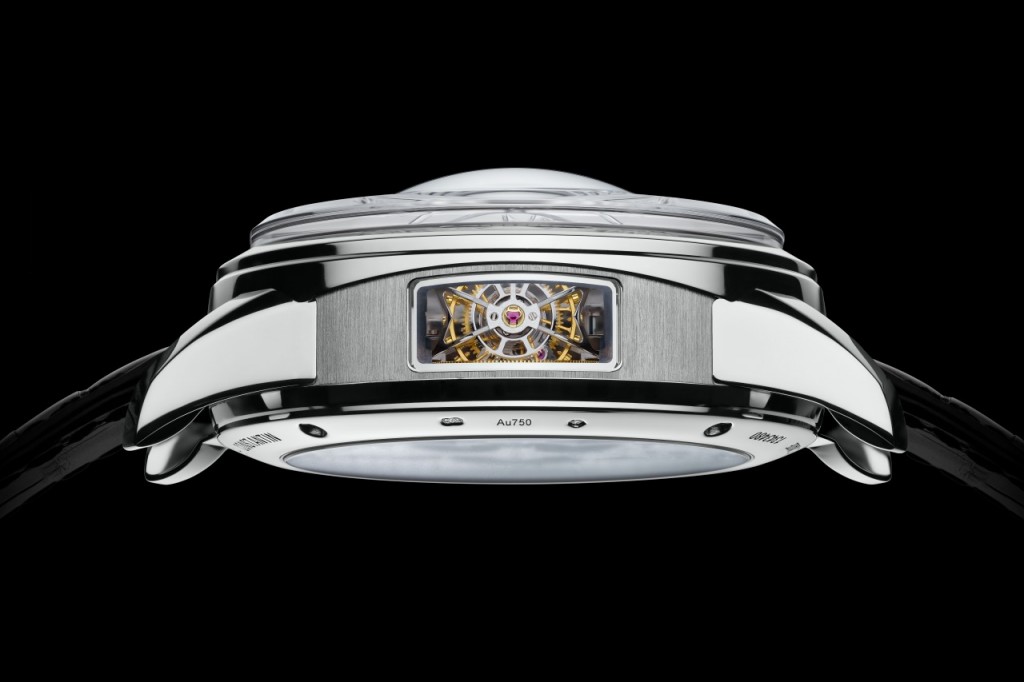 The Armillary Tourbillon is visible from the case side