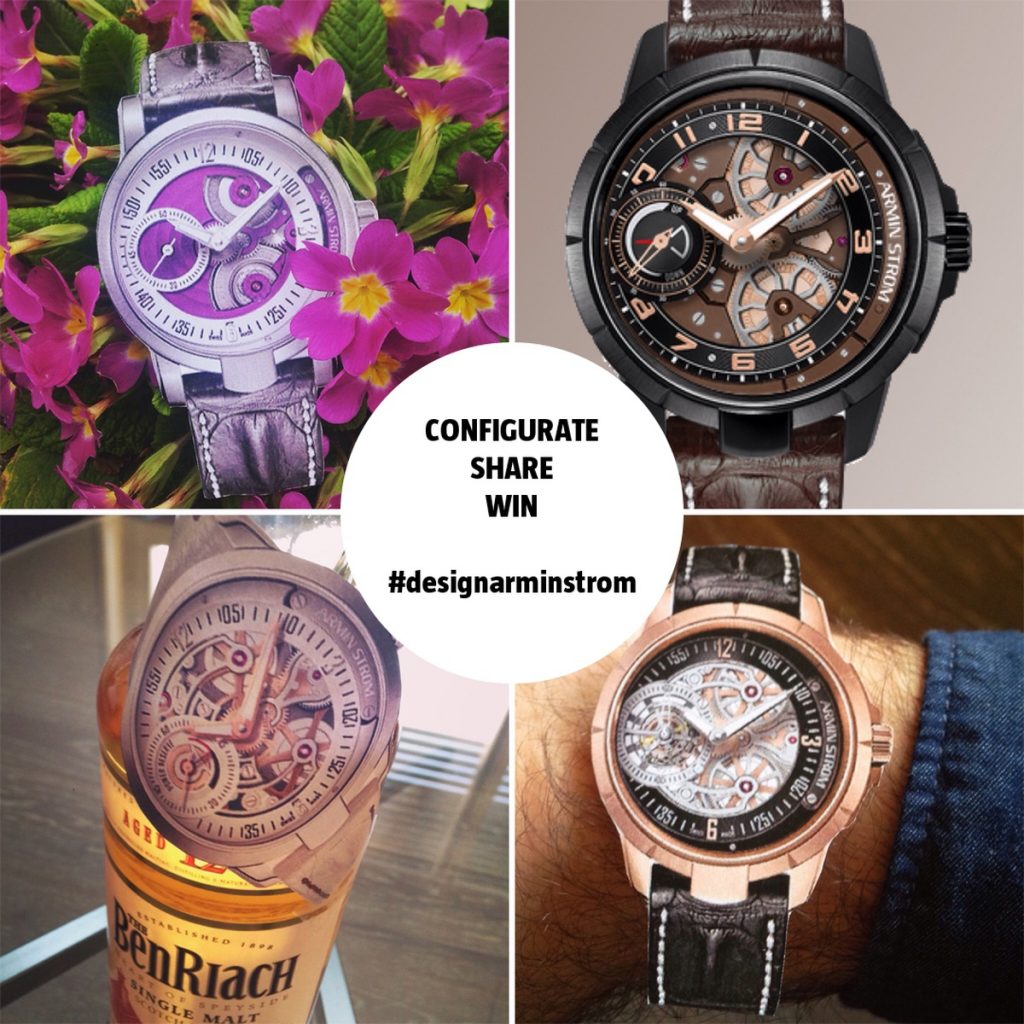 Armin Strom, whose revolutionary Mirrored Force Resonance watch recently won the prestigious International Red Dot Award, is taking the world by storm with its newest concept in buying a watch: the Watch Configurator. We wrote about the Watch Configurator here, before, but now we have had a chance to try it out first hand. Even better, the brand is offering an instagram contest on line where you can configurate your own watch, share it, and win credits toward a watch.

About the Armin Strom ‘Configurate/Share/Win’ Contest

Essentially, you need to follow @ArminStrom and use #designarminstrom on instagram for your post. Configure your personal watch at Configurator.arminstrom.com. The winners will be selected from the most popular visuals of the competition. They will be chosen by a jury on May 16, 20i7 ad will be informed via their instagram account. There are three prize credit packages being offered: CHF $5,000; CHF 7,500 and CHF 15,000 – all in credits to be used as cash to configurate your Armin Strom watch.  The credit can be given to someone else by the winner, but who in their right mind would want to do that? 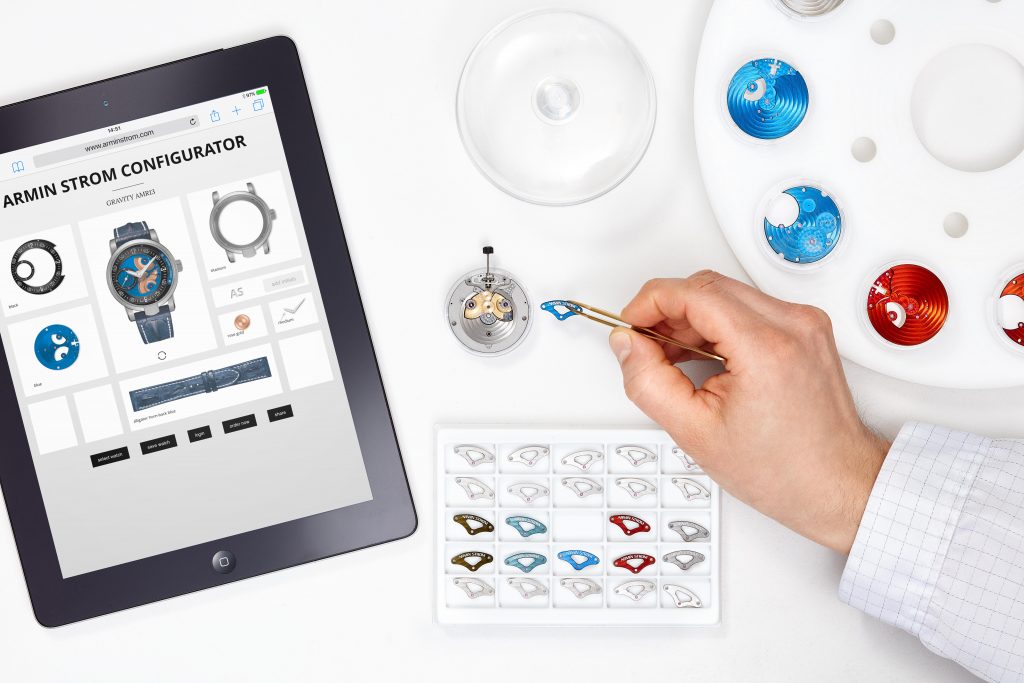 Armin Strom Watch Configurator lets you build your own watch.

There is one drawback the Watch Configurator in general. Beware, you will get hooked. Believe me, the first time I used the Watch Configurator, I couldn’t get over the immense number of choices to personalize your watch. As you make your selections, the image of the watch in the center changes – reflecting your choice of rotor type, component colors, case material, hands, strap and even stitching color. You can even choose which base model you want, ranging from the Edge Double Barrel to the Gravity, the Skeleton and the Tourbillon.

The first time I configured my watch, I was conservative. Then I went back and changed it up – having a lot of fun with color. Then I changed certain parts of that watch again. Then I thought, “hmm, maybe I’ll try it with a different watch.” I switched to the tourbillon. I changed it…. again… and again… and again. A few minutes later, when I went to check out another watch, I realized a full two hours had flown by. Yes, you will be hooked. It is like a great game of watch designing, with the hard work done for you and the fun part waiting to be orchestrated. 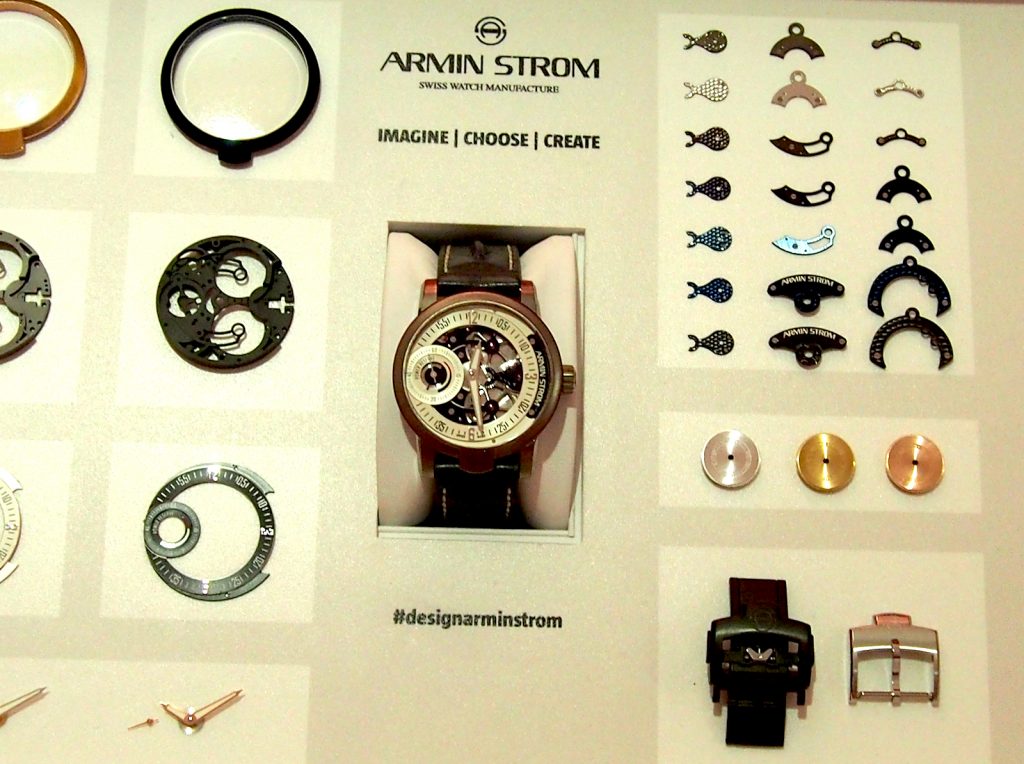 The choices for customization your Armin Strom Watch via the Watch Configurator run the gamut from component parts to strap and even stitching.

The innovative Watch Configurator is easy, fun and opens a world of personalization – all in a luxury field that is often too stodgy. Because Armin Strom is independently owned and because the brand builds its watches all under one roof, it has the ability to offer the Watch Configurator and react quickly to individual needs and requests. While you may be able to go into an Armin Strom authorized retailer and make your own watch, you will have a lot more fun doing this from the comfort of your home on the specially conceived online system. You can even have your own contests at home amongst friends, as it is a truly remarkable experience.

So don’t wait – check out the Watch Configurator now. And remember, share your design according to the contest rules and you may have a nice chunk of credit coming your way for the purchase. 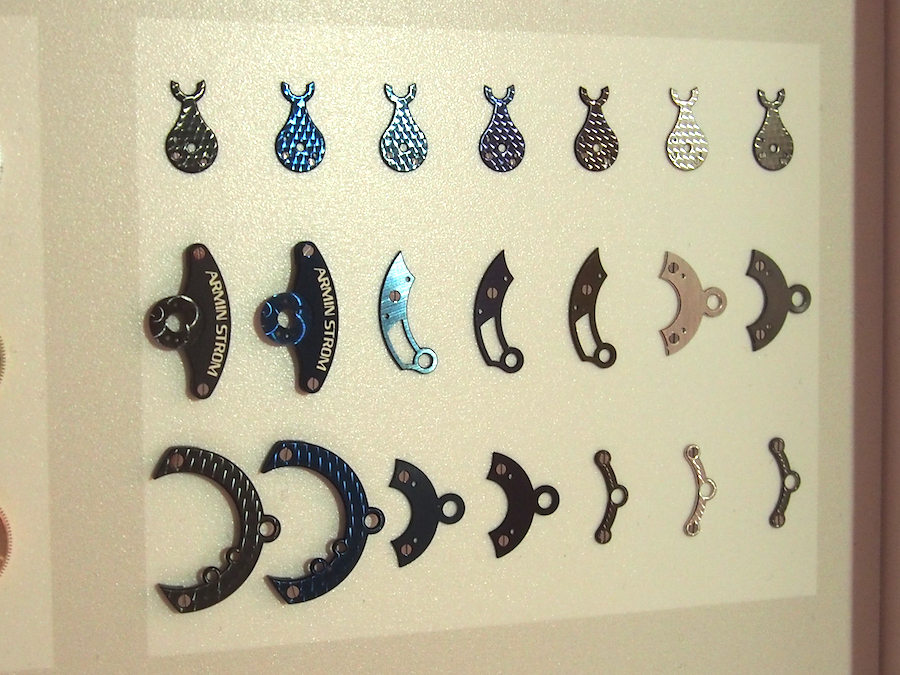 The Armin Strom watch configurator is fun and easy to use — it’s like playing a luxury game.

In addition to the incredible popularity of the Watch Configurator, Armin Strom has had a super busy month. As mentioned, the brand has been awarded the prestigious International Red Dot award for the Mirrored Force Resonance watch. The revolutionary watch – which you can read about in detail here – is a deserving winner for the award for excellence in product design in the watches category. 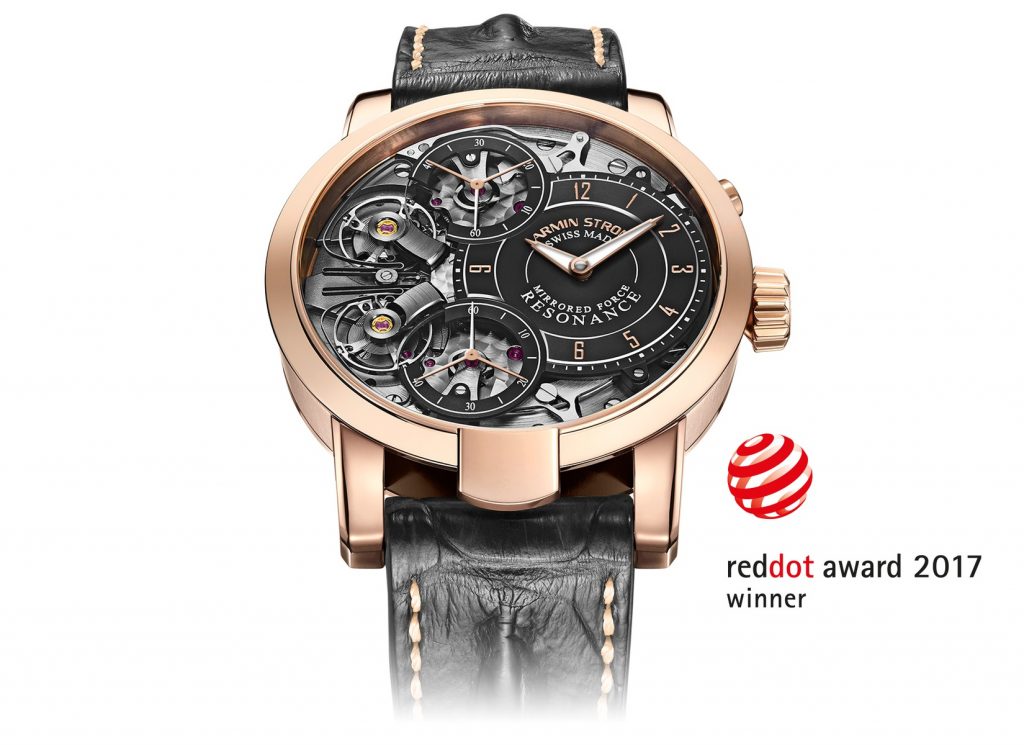 Just a week after this win, the brand excelled in the equestrian field, when its brand ambassador, jockey Tim Burgin, won the Prix de Compiegne. The spectacular race over 2,150 meters, was won with a beautiful horse named April Valley. 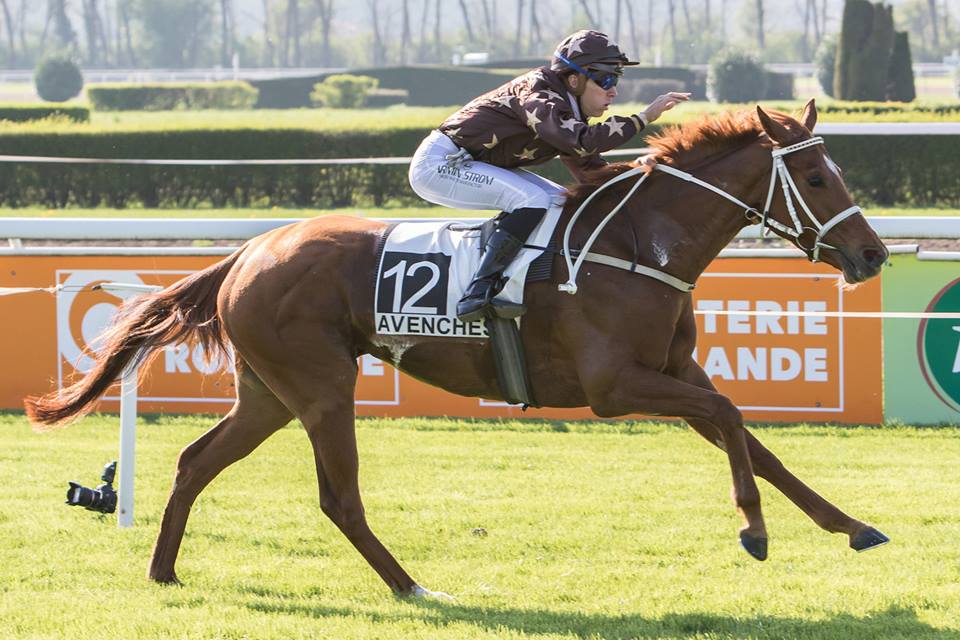 Then, on April 20, Armin Strom Sailing Team (wearing the Armin Strom Gravity Sailing watch), with Flavio Marazzi, broke the GC32 sound barrier of 40 knots during a training session on Lake Garda – with a peak speed of 41.6 knots. 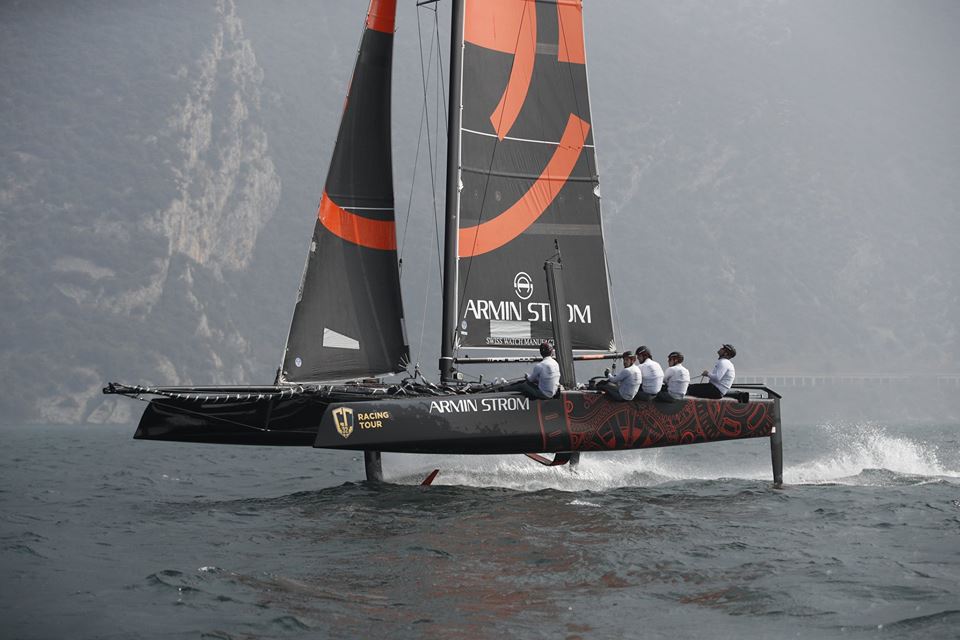 Armin Strom Sailing Team, with Flavio Marazzi, broke the GC32 sound barrier of 40 knots – with a peak speed of 41.6 knots.

And, over this past weekend, brand ambassador Max Chilton raced at Barber Motorsports Park in the USA … wearing is Armin Strom Edge Double Barrel watch, of course. 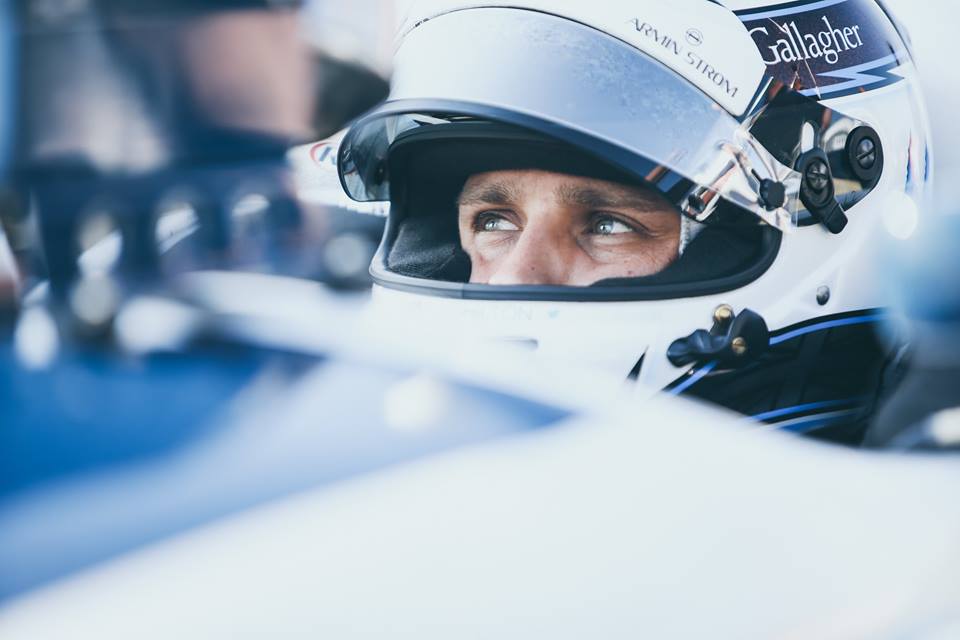 With all of this excitement from a young company, it’s time for you to check it out.