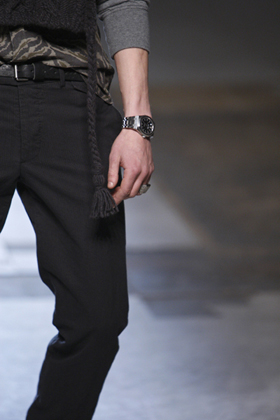 Audemars Piguet on the runway with designer Michael Bastian

Bastian’s inspiration for the season was the American painter Andrew Wyeth and his dark, spare, introspective vision of Maine and New England.  The collection color palette was darker than in previous seasons and included black, olive, red, indigo with brighter hues of raincoat yellow and hunter orange for added effect.  Fabrics were rugged yet luxurious with brushed tweeds, leather, moleskin and shearling use to great effect.