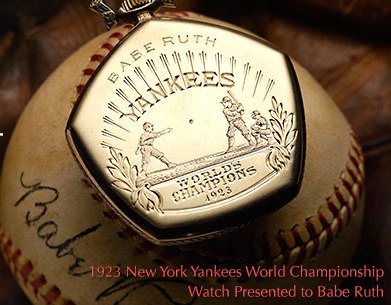 He was a troubled child who ended up in a reform school. Born in 1895, George Herman “Babe” Ruth Jr.  began playing Major League Baseball when he was a teenager (first or the Baltimore Orioles in the minor league and then for the Boston Red Sox in the MLB). He wowed the world with his pitching and hitting talents. Nicknamed the Great Bambino, Babe Ruth won hearts during his 15 years with the New York Yankees – where he drew incredible numbers of fans to the ballpark. Today, he is regarded as one America’s most legendary athletes. 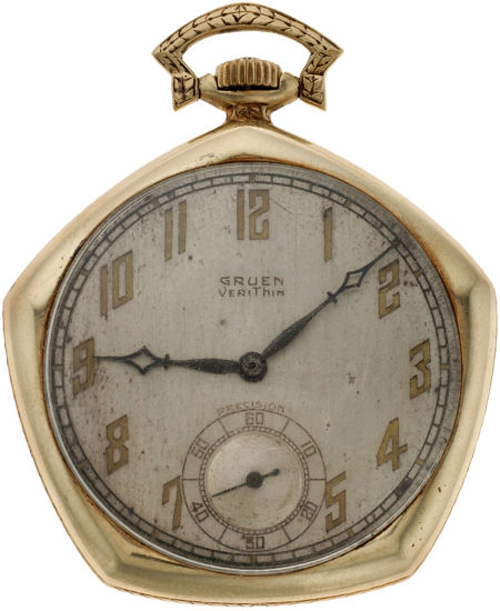 The VeriThin Pentagon watch was first introduced in 1922 by Gruen.

This may well be why one anonymous phone bidder spent a whopping $717,000 on a World Series Pocket Watch during this weekend’s Sports Platinum Night Auction by Heritage Auctions in New York.  The pentagon-shaped 14-karat gold 1923 World Series pocket watch was originally part of a set that was given to Babe Ruth and his teammates after they beat the New York Giants in the 1923 World Series, wherein Ruth batted 368 and hit three home runs.  The watch is engraved with a picture of a pitcher, hitter and catcher, as well as with a ball in flight, and is inscribed “Presented by Baseball Commissioner to George H. Ruth.” 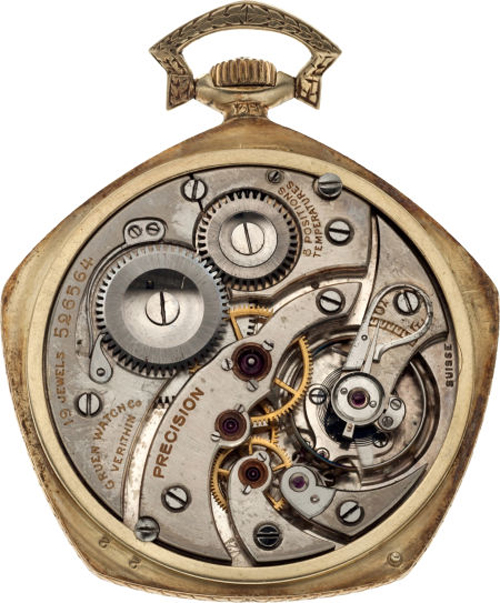 The Gruen VeriThin Pentagon pocket watch had a patent for the pinion packet, which Gruen patented in 1874.

The Babe Ruth watch is a Gruen VeriThin watch, which Gruen first introduced to the world in 1903 and for which the brand owned a patent.  The Pentagon pocket watch was first unveiled in 1922, and was an immediate hit thanks to its unusual shape. It was this then- hot new design that the baseball commissioner opted for as his gift after the 1923 World Series.  Interestingly, this was not the highest item sold at the auction. In fact, a bat used by Shoeless Joe Jackson in a 1911 game sold for $956,000. 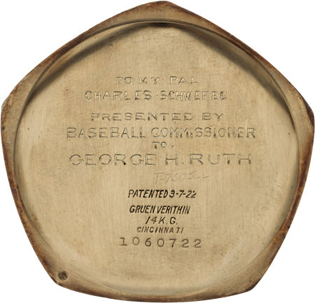 The watch is inscribed on the caseback to Babe Ruth

Of particular interest to watch lovers, though, is a little background on Gruen Watch Company. The American watch brand that started in 1894 as D. Gruen and Son. (The owner, Dietrich Gruen had first started another watch brand, Columbus Watch Manufacturing Company, in the basement of a Columbus, Ohio, bank building by Dietrich Gruen. He eventually left that company to start the new one.)   The first Gruen watches were high-quality pocket watches in two sizes.  After a series of hardships and ownership changes, the Gruen watch business   moved to New York in 1958. Rolex eventually purchased the Precision Factory of the brand, which is today a Rolex owned building. Gruen Watch Company closed its doors officially in 1976, though some companies went on to produce licensed Gruen watch products.