Behind the Scenes with F1 Team Marussia (original pics) 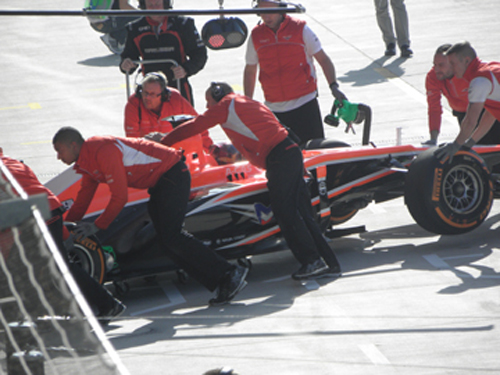 From the moment a car comes into the garage, every move is carefully orchestrated.

With the 2013 Formula 1 Racing season coming to a  close after the races in Brazil last weekend, it is a good time for teams to take stock of their performance and plan ahead for all of the changes coming in 2014.  F1 Team Marussia is doing just that.  Thanks to Armin Strom Watch Company, which is a sponsor of the team, we got to spend time behind the scenes with F1 Team Marussia at the Circuit of the America’s track in Austin Texas. 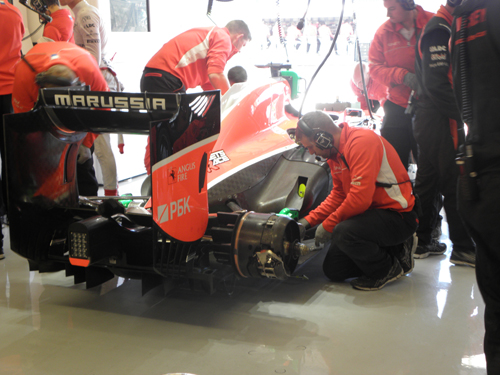 Every person has his exact job to do when a car comes into the paddocks.

Being inside Marussia F1 Team garages in the paddock — especially when the racing is going on – is like being inside a carefully orchestrated surgery room (or what you would expect that to be).  Each and every person in the garage has his own job – from communicating with the driver, to tracking technology on the car, bringing the car in to the pits when needed, and making split-second changes or repairs. 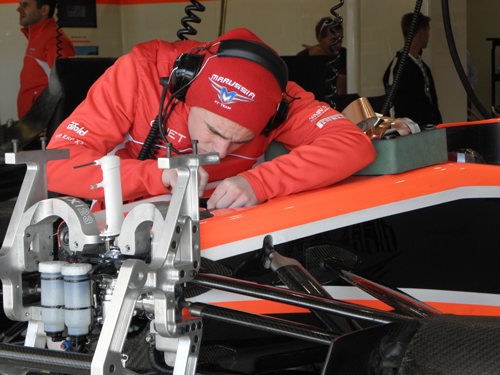 Precision is key with Formula 1 racing.

Being inside the garage and watching the car come in during the race is awesome experience. AS soon as the car comes down the line, the team responsible for backing it into the garage is on the job faster than you can blink an eye. Then, each  technician falls into place—one for tires, one for wheels, one for almost anything you can think of – before the car speeds away again out the doors.  The amount of spare parts the team travels with for the car is also incredible – with multiple engines, multiple cars and a host of spare car body parts. The team even travels with its own tools. 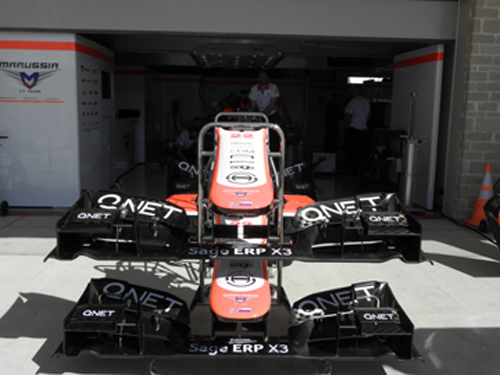 The number of spare car parts the Team must travel with is staggering.

According to Ewen Honeyman, partner services director of Marussia F1 Team, shipping the cars from race to race – complete with tools, equipments and parts – is a30-ton experience (each car weighs about 642 pounds). The amount of money that goes into this is also incredibly steep.  One engine – with its three-and-a-half thousand parts, can cost a quarter of a million dollars- and teams are allowed eight engines per year.  Team Marussia, a young and small team, has a budget of about $80 million for 2014 – when engines will change. Trying to imagine the budget for the larger Ferrari, Red Bull or similar teams is an exercise in mind-boggling numbers. 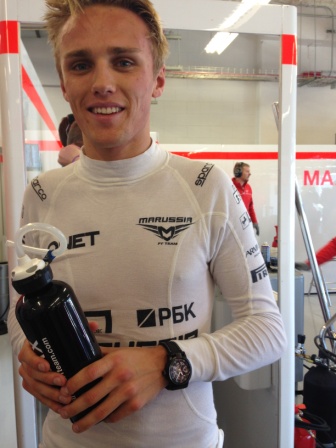 The drivers for F1 Team Marussia, British Max Chilton (whom we got to meet) and French Jules Bianchi, have to be on top of their games.  The 22-year-old Chilton – who started driving when he was 15 when he started driving, is an avid golfer, squash and tennis player in addition to driving.  He is disciplined and intent on conquering the learning curve with few mistakes and solid driving.  Thanks to Armin Strom – which uses parts from Team Marussia’s cars in some of its watches – for being on the fast track. Read more about that here.