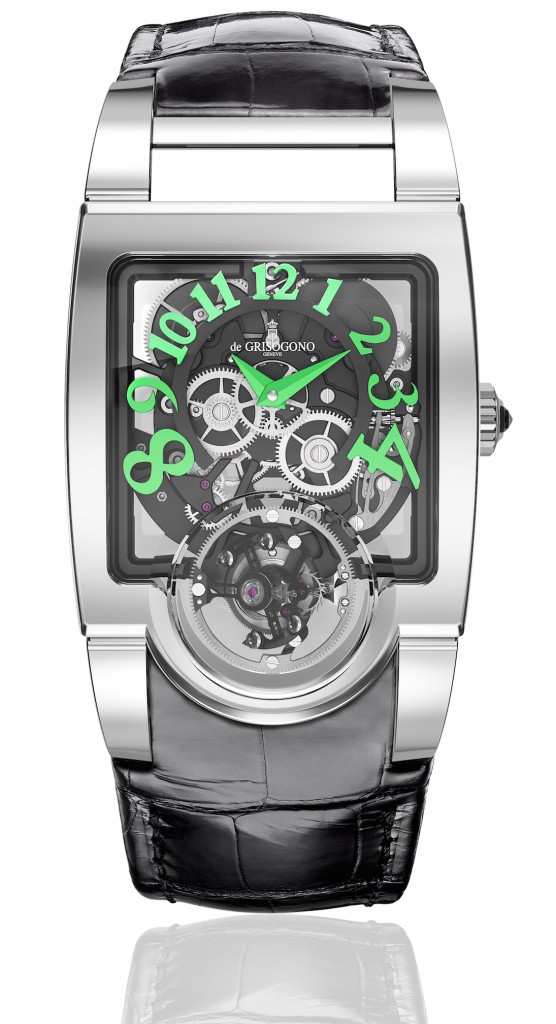 Founded in 1993 by Fawaz Gruosi, de Grisogono launched as a premier high-end jewelry manufacturer. Gruosi is known for his passion and intensity surrounding the products he creates and  routinely turns out one-of-a-kind masterpieces featuring precious stones and black diamonds. Affectionately referred to as the King of Black Diamonds, Gruosi added to his renown by entering the world of haute horology in 2000. Since then, de Grisogono has expanded its work in horology to all new levels.

This year, the brand unveiled the astounding and intriguing Instrumento No. Uno Tourbillon —   designed around the theme of geometry and transparency with an avante-garde case and tourbillon construction. In fact, the watch features a flying tourbillon with inclined balance staff that sits inside its own sapphire carriage.

The new watch is the result of three years of research and development with outside experts.  The apparent simplicity of the watch belies its supreme complexity, which happens to be the hallmark of the brand. The No. Uno Tourbillon is a watch that is totally at home in the world of haute horology. 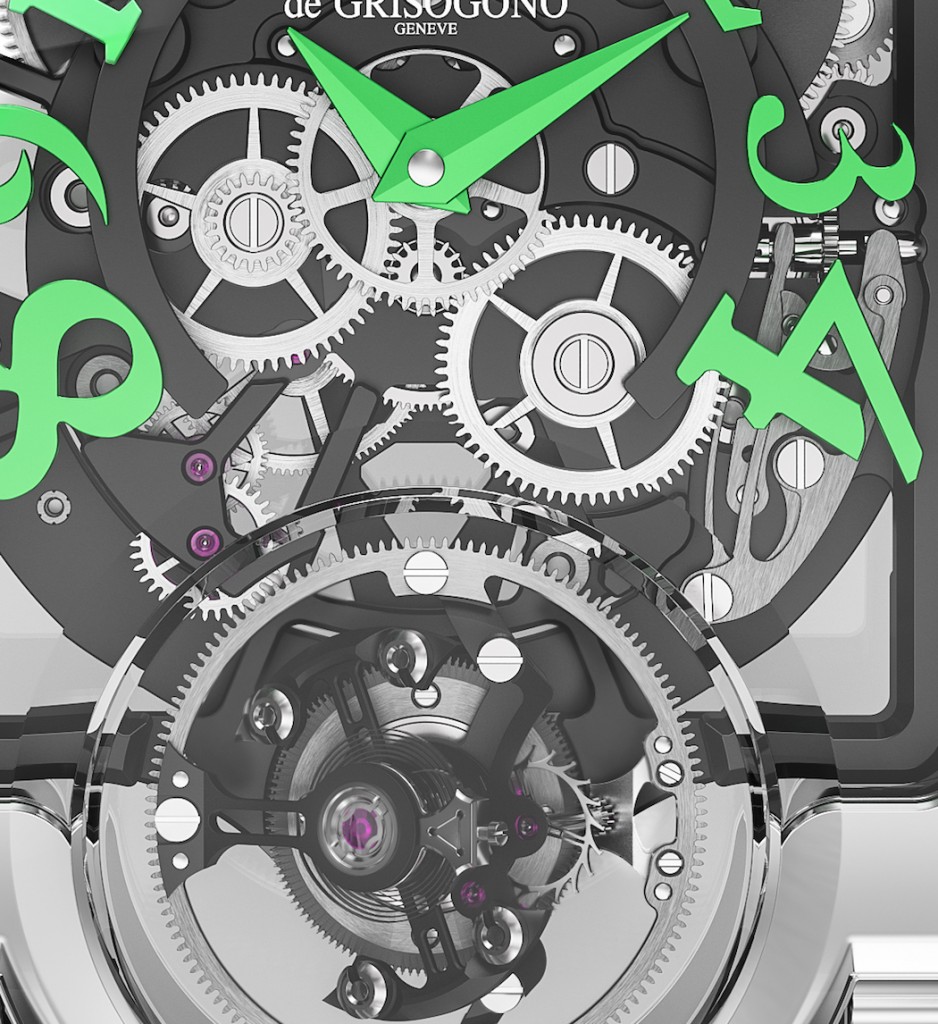 The 30-degree inclined flying tourbillon sits within a sapphire enclosure

In fact every component of the all-new 266-part movement was developed especially for this watch in tandem with deGrisogono, which had weekly meetings to preside over the progress of the caliber.

Tourbillons, as we have covered extensively here at ATimelyPerspective, are used to fight the negative effects of gravity on a mechanical timepiece. Originally developed for pocket watches, the Tourbillon pays noticeable dividends with respect to accuracy as a pocket watch tends to remain in a vertical plane and therefore is most vulnerable to Newton’s first discovery. Wrist watches however move constantly between vertical and horizontal planes and, as a result, the accuracy boosting effects of a Tourbillon are less pronounced. DeGrisogono  sought to combat the anomaly with a flying tourbillon and inclined the balance staff by 30 degrees.

The 30-degree inclination was selected for both technical and aesthetic reasons.  From a technical standpoint, the inclination of the balance staff places the Tourbillon in the optimal position for a wristwatch. From an aesthetic perspective, if the balance staff were to be further inclined the thickness of the piece would have been increased, and comprised its wearability. Again, the watch is at home in the world of haute horology. 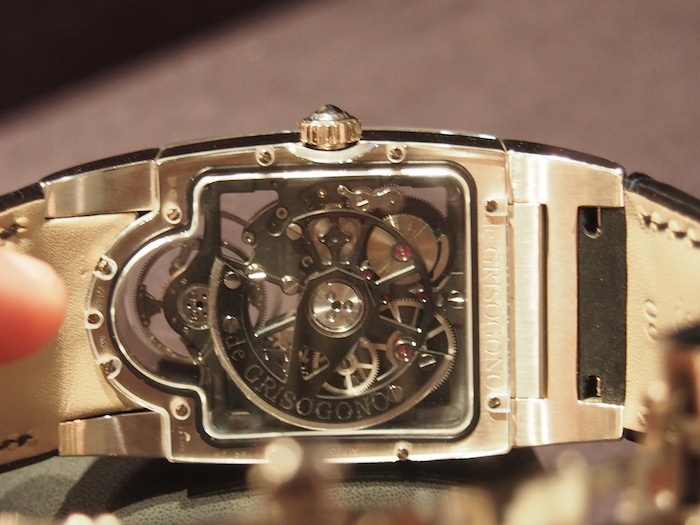 The 266-part movement is visible via the case back

To ensure that the regulating organs of the watch remain inclined in relation to the ground in just about all situations, deGrisogono realized that it was more appropriate to incline the balance-staff than the tourbillon itself. To do this, deGrisigono worked on the tilt of the balance staff while keeping the rotation of the Tourbillon carriage parallel to the movement. What that means is the accuracy of the Tourbillon remains intact no matter how you are waving your arms. Furthermore, as the weight of the components of a Tourbillon are always a concern, deGrisogono has gone to lengths to keep the mass down. The lighter the better when is comes to maintaining the accuracy of Tourbillon — and the total weight of this one is 3.6 grams thanks to the materials used.

All of the inclinations and manipulations result in the tourbillon beings positioned outside the movement space at the 6:00 position —   on full display via a three dimensional sapphire lens. In addition, to further the theme of transparency, the watch has no dial and the rectangular movement is visible from both sides of the watch. The stylized Arabic numerals are placed on a horseshoe-shaped flying disc that sits directly on the mainplate. Also visible is the spoke of the skeleton-worked oscillating weight, which is adorned with a diamond-shaped opening. The crown of the watch is set with a black diamond — a nod to Gruosi’s expertise in the world of gem setting. 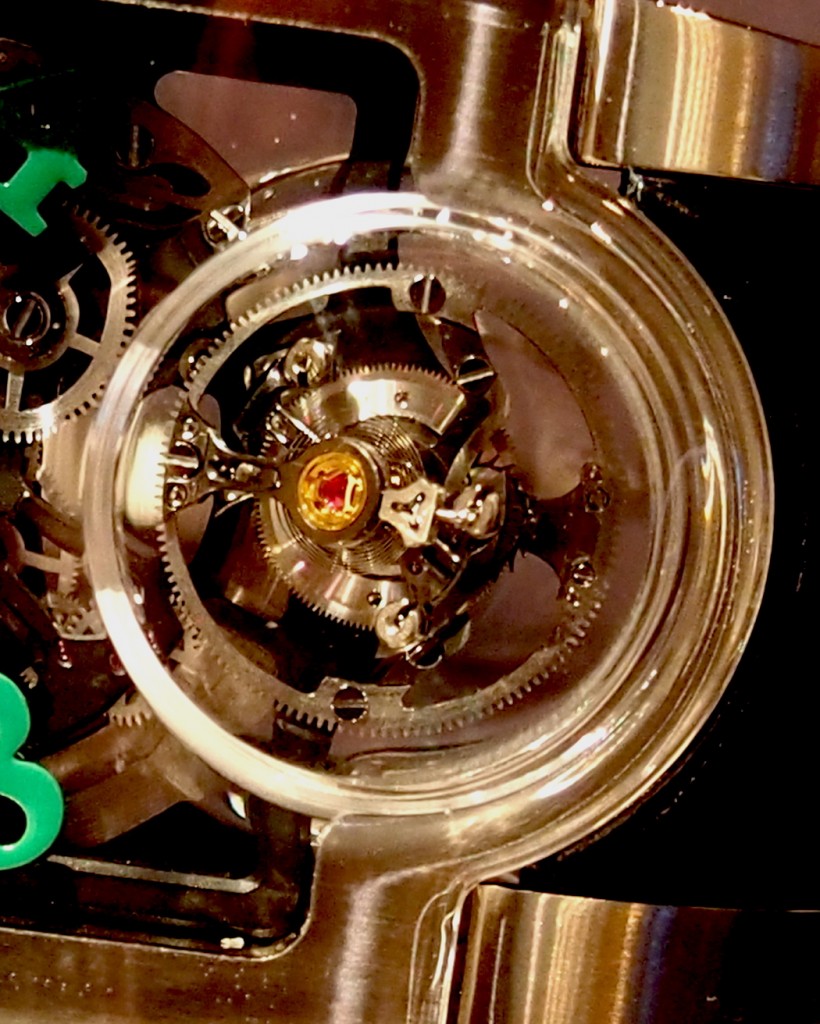 The movement was three years in the making

As far as the TB 3100 skeleton self-winding movement’s technical characteristics are concerned, it is equipped with a twin barrel and has a three-day (72-hour) power reserve. Its mainplate and bridges are skeleton-worked, with polished angles and matt black PVD coating. Its 266 parts are accommodated within a total volume measuring 9.29 mm thick, 26.8 mm wide and 34 mm long. The tourbillon itself is composed of 62 parts weighing just 3.6 grams.

The watch measures 59.2x33x14.99 and while, at first blush, the watch measures large, it is curved  to enhance wearability and, as a result, wears smaller than it actually measures. It is being built in two version: No. 1 – 18-karat white gold with green hands and matching numerals (my personal favorite),  or No. 2 – an18-karat rose gold with rose gold hands. Each retails for $162,700.