Don’t Miss Your Chance To Be A Queen: Marie Antoinette’s Jewels Up For Auction By Sotheby’s

We don’t typically write about jewelry here, but we know that we have women readers, as well as men, and this article has so much substance, that we couldn’t resist. For the first time ever, jewels owned by Queen Marie Antoinette are up for auction … and for the lucky buyer that could make you a queen in your own rights. 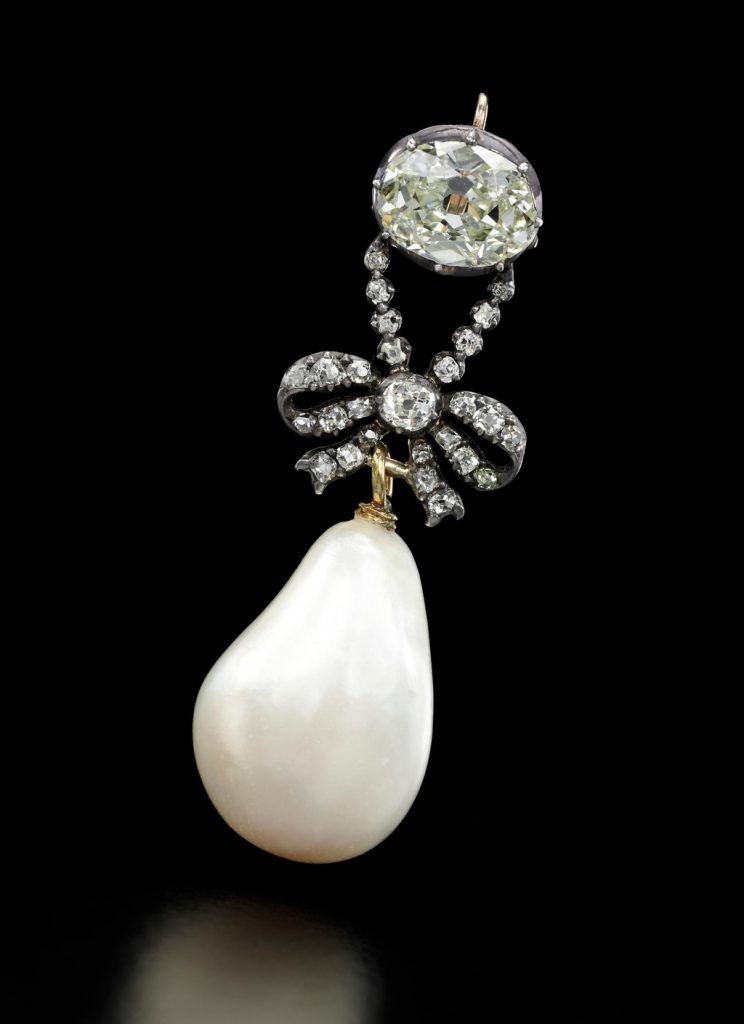 Marie Antoinette’s never before seen natural pearl and diamond pendant up for auction.

Please note, that this article by ATimelyPerspective founder Roberta Naas originally appeared on her Perfect Timing column on Forbes.com.

“If you are a fan of jewelry and a lover of history, you will not want to miss one of the biggest (provenance-wise) jewelry auctions of the year. On November 12, 2018, Sotheby’s will hold its “Royal Jewels from the Bourbon Parma Family” auction. The royal jewelry – everything from diamonds to pearls, sapphires and more – includes pieces from several centuries of European rulers and dynasties. Most exciting, perhaps, is the auction of several pieces of jewelry owned by the famed Queen of France, Marie Antoinette, who was beheaded in 1793. The public has never seen some of the more than 200-year-old jewels.

The young queen (who was 18 when she ascended the throne in 1774) was known for her extravagant lifestyle. She bedecked herself in diamonds, pearls and tiaras and had several hundred different gowns made for herself. She and her husband Louis XVI lived such lavish lives that their style most likely precipitated the French Revolution. In 1792 when the Revolution was imminent, Antoinette packed her jewels in a trunk and shipped them to Brussels, who ruled there, who then sent them to Vienna to Antoinette’s nephew who was the Austrian emperor. 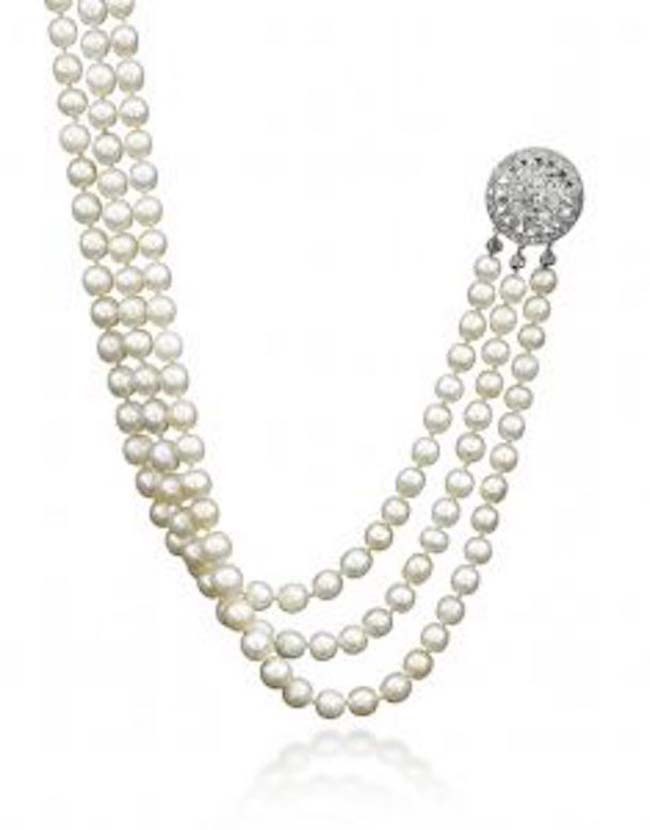 Marie Antoinette, Louis XVI and their children never made the escape to Austria, though. In 1792 the family was imprisoned and the rulers were subsequently beheaded in 1793, after being found guilty of High Treason by the Revolutionary Tribunal. Their son died in prison and the daughter was final released after several years and fled to Austria, where she received her mother’s gems. From then on, they were passed on through generations of royal bloodlines.

In addition to Marie Antoinette’s jewels, there are a host of gems previously owned by King Charles X of France, the Archduke of Austrian and the Dues of Parma. The Bourbon-Parma family is a bloodline of rulers that ranges from the Bourbons to the Habsburgs and includes Kings of France, Spain, Austria and more. As such, many of the pieces up for auction are extraordinarily opulent.

More than100 lots crossing 200 years of history surrounding some of the most important royal and aristocratic families will be auctioned. Among the key pieces on the block: Marie Antoinette’s natural pearl and diamond pendant that is expected to fetch between $1 -$2 million. There is also a set of natural pearl drop earrings that recall the splendor of the French court (estimated to sell for up to $50,000) and a multi-strand pearl necklace made with 331 natural pearls (est. $300,000) 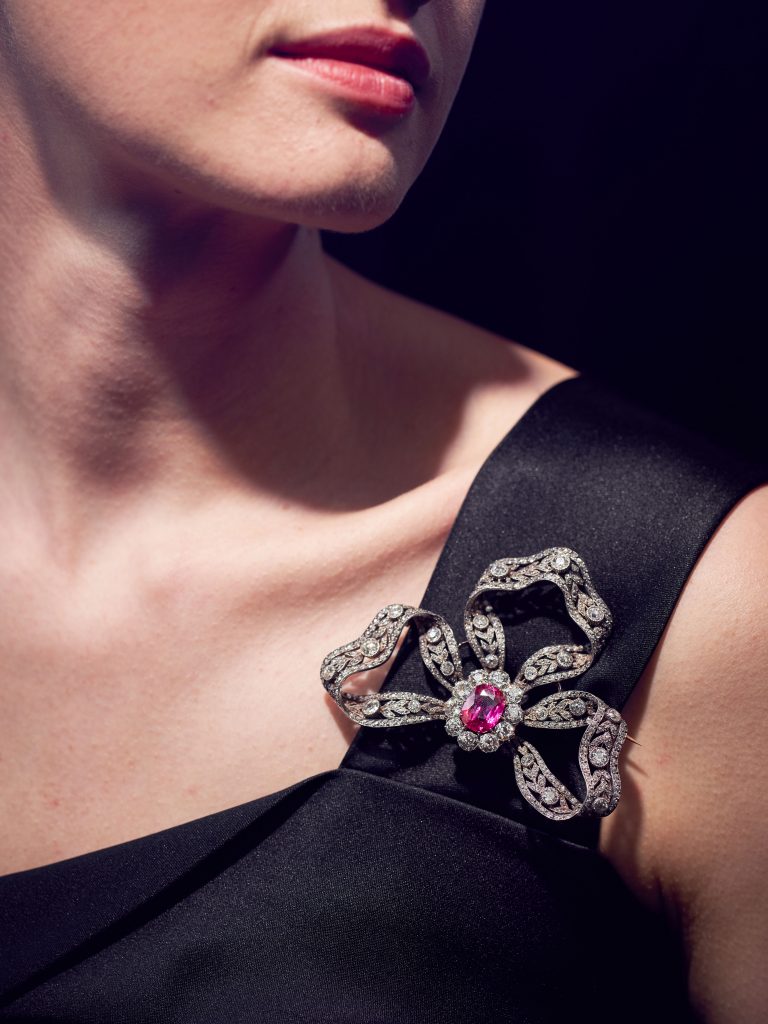 LONDON, ENGLAND – JUNE 12: A ruby and diamond bow brooch at Sotheby’s on June 12, 2018 in London, England. (Photo by Michael Bowles/Getty Images for Sotheby’s)

A host of jewels from related reigning dynasties in Europe (Habsburg and more) include a diamond parure consisting of 95 diamonds and including five solitaire diamonds that had been owned by Marie Antoinette. There is also a diamond bow brooch featuring a 6.89-carat Burmese ruby that is estimated to sell for $200,000 to $300,000 and a diamond ring set with an opulent fancy orange-pink diamond weighing 2.44 carats. The list goes on and on and comprises one of the most alluring auction offerings in history.

For those interested, there will be public exhibitions for viewing of the jewels beginning June 21, in Milan, and then on September 18 in Munich, and September 21 in Cologne.”