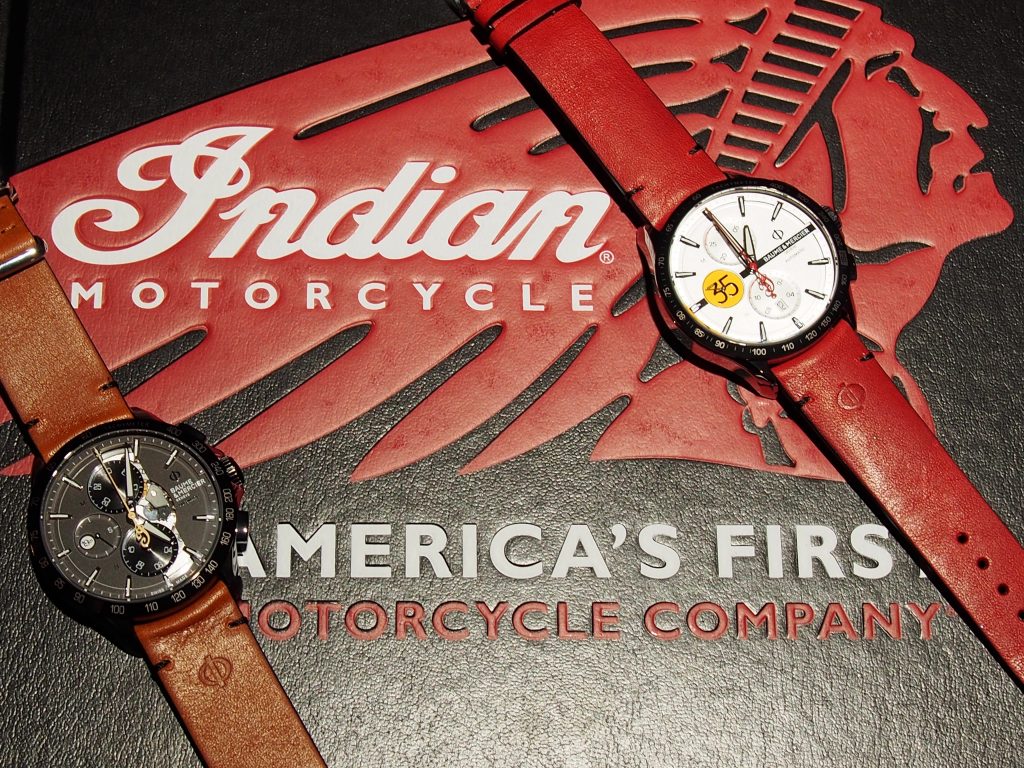 Avid watch lovers familiar with our site know that we have a special affinity for Swiss watch brand Baume & Mercier. Perhaps it stems from the fact that this brand has such a wonderfully inspiring roots story — founded by a husband wife team more than a century and a half ago – and dedicated to creating innovative product with good value. Perhaps it is because over the past three decades, we have formed a strong relationship with the brand and its leaders, who seem spot-on in terms of direction. Or, perhaps it is the products and the projects that this brand takes on – and executes brilliantly – that draws us in. For whichever reason – or a culmination of all of these influencing factors — Baume & Mercier is near and dear to our hearts. What’s more, the brand may well be near and dear to the hearts of many around the world, and especially in America, thanks to its very focused course of partnerships and product unveilings over the past half a decade. From partnering with Shelby American about four years ago to revive the beloved Carroll Shelby and Shelby Cobra names in Capeland watches, to the recent partnership with “America’s first motorcycle company” Indian Motorcycle, Baume & Mercier is striking a chord that goes to core of America and of auto enthusiasts globally. 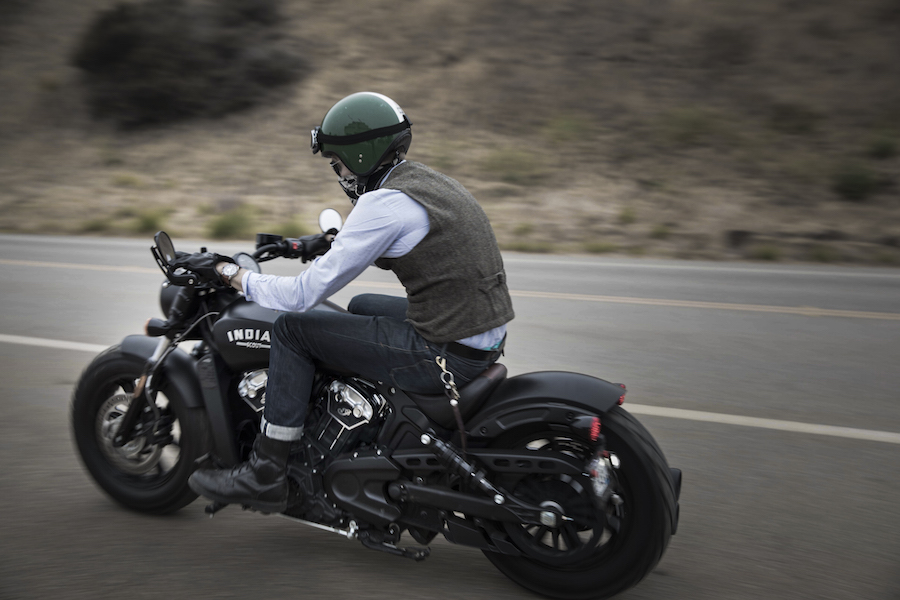 One has to admire the vision of Baume & Mercier CEO Alain Zimmermann, who not only engineered the first partnership for the Capeland Cobra, but also had the foresight last year to unveil a new collection of “sport watches for gentlemen” – the Clifton Club – to offer quality and value. Did he know then that the next partnership – the one unveiled last year with Indian – would need a watch collection to call home? I’m pretty certain of it. Zimmermann has always had a long-term look toward the future. 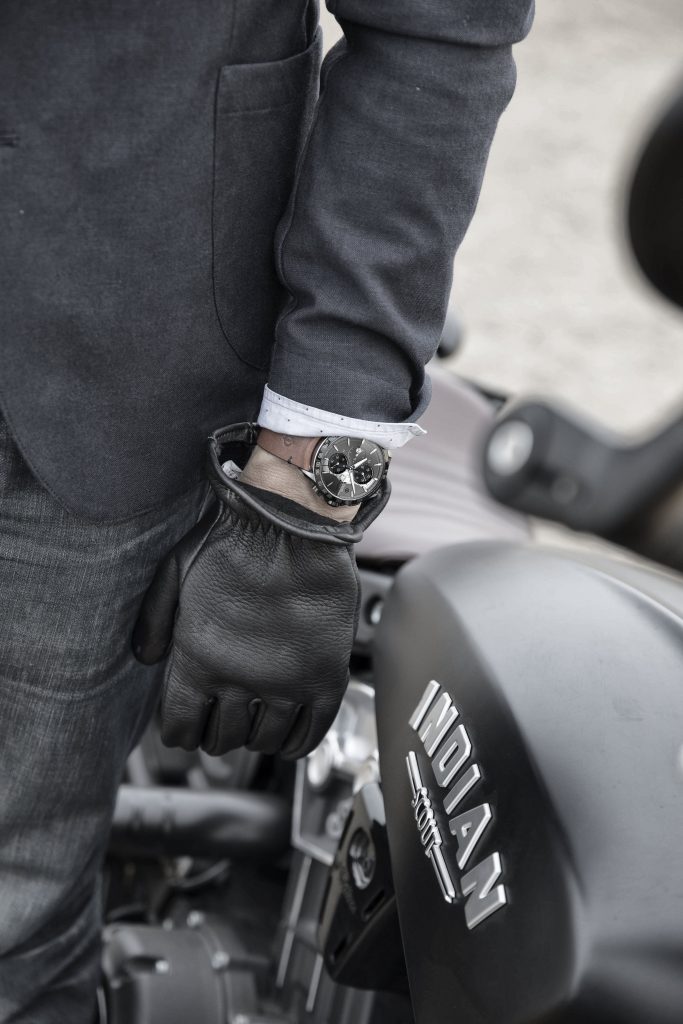 In fact, Zimmermann has his fingers on the pulse of changing times, embraces the digital world and does his best to understand today’s millennial customers and their spirit for adventure and for stories. As such, the very first Indian watch unveiled by the brands – whose synergies are many – revolved around a man who dedicated his life to breaking speed barriers with his Indian motorcycle: Clifton Club Indian® Burt Munro Tribute 1967 watch. While that story resonated amongst motorcycle and auto enthusiasts, it also translated a genuine feeling in the timepiece. With designs codes from Burt Munro’s racing accomplishments at the Bonneville Salt Flats built into the timepiece (from colors, to numbers, leathers and more), the watch was an immediate hit. 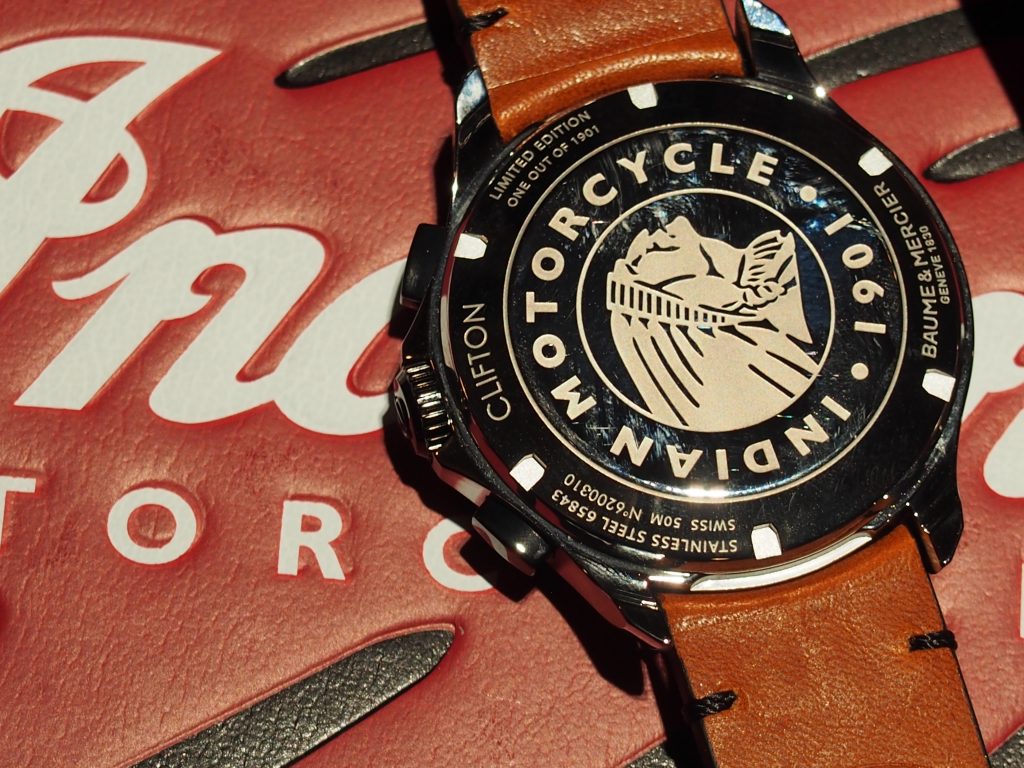 Baume & Mercier’s Design Director Alexandre Peraldi and Indian’s Industrial Design team in Minnesota worked tirelessly together to capture the DNA of both companies. Peraldi, who has been with Baume & Mercier for years, is another shining star. His uncanny ability to embrace and adapt the environs of the partner brand, and incorporate them into harmonious designs that are at once symbiotic and individualistic is his strong point. Add to that his passion for design and his view for the future generations of a collection, and you have a winning result … as with the Indian® Legend series of watches.

Both of the new watches, that complement the earlier-released Burt Munro Indian version, are inspired by Indian® motorcycle designs and features. Both are 4mm in diameter and both feature the Indian Motorcycle “Indian head” logo meticulously etched into the case backs.

The new Clifton Club Indian chronograph watches include the Clifton Club Indian Legend Tribute Chief® Limited Edition, inspired by the Chief® motorcycle powered by Indian’s ThunderStroke 111 V-twin engine, and the Indian Scout® model reflecting the lighter-weight motorcycle. Easily one of the more intriguing marks on the watch—and a look that seems to be a signature now with Baume & Mercier’s auto-inspired watches – is the fact that the chronograph’s center seconds hand features a stylized Indian® logo “I” as the counterweight. (In the Cobra series, the famed “Cobra” logo was the counterweight.) 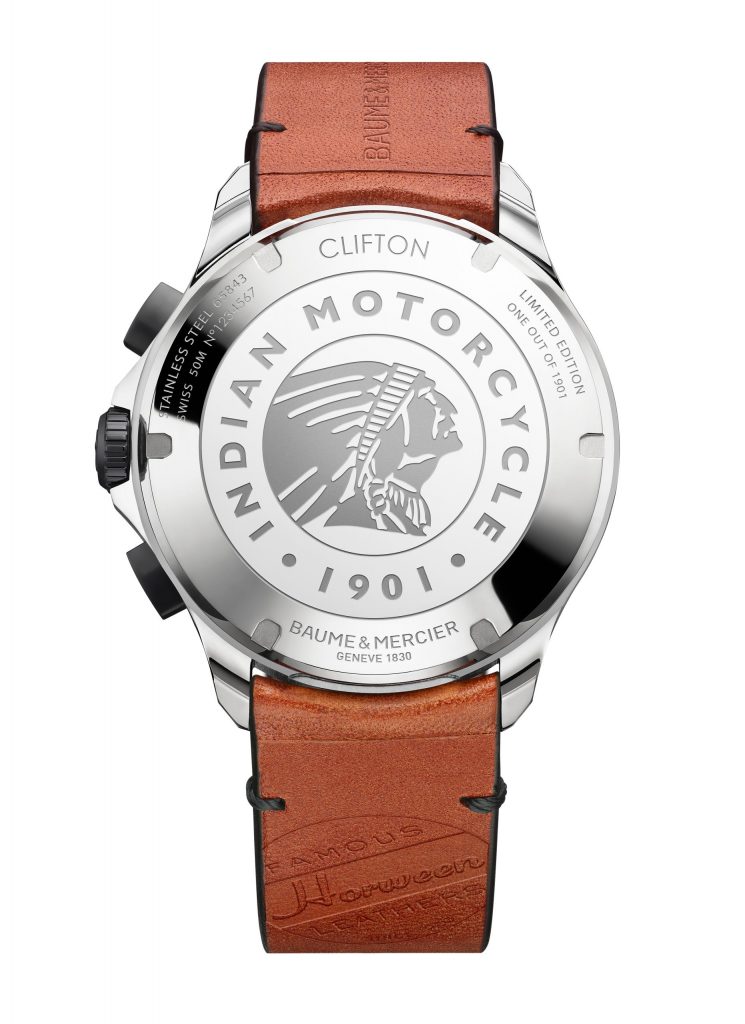 The back of the Baume & Mercier Clifton Club Indian Legend Tribute watches feature the Indian head logo inscribed on it and the numbered edition.

The Clifton Club Indian Legend Tribute Scout watch – with a brown leather strap made by Horween, which also makes the Indian® leather seats – is an automatic chronograph with tachymeter for measuring speed, and date indication. It is crafted in stainless steel with a fixed bezel in ADLC black for a true stealth appeal. The watch features an open-worked opaline gray dial (the livery shade of the Scout motorbike models) and black subdial chronograph counters designed to recall the motorcycle’s speedometer.

The Indian spirit shines through in a host of additional accents that include riveted indexes and hands that are coated with SuperLuminova C1 that exudes a green emission, a beige chronograph seconds hand (with aforementioned counterweight in stylized script “I”), and a date disk with “1901” on the 19th day of the month to indicate the year Indian® was founded. This 44mm watch is powered by a self-winding Valjoux 7750 caliber that beats at 28,800 vibrations per hour and offers 48 hours of power reserve. 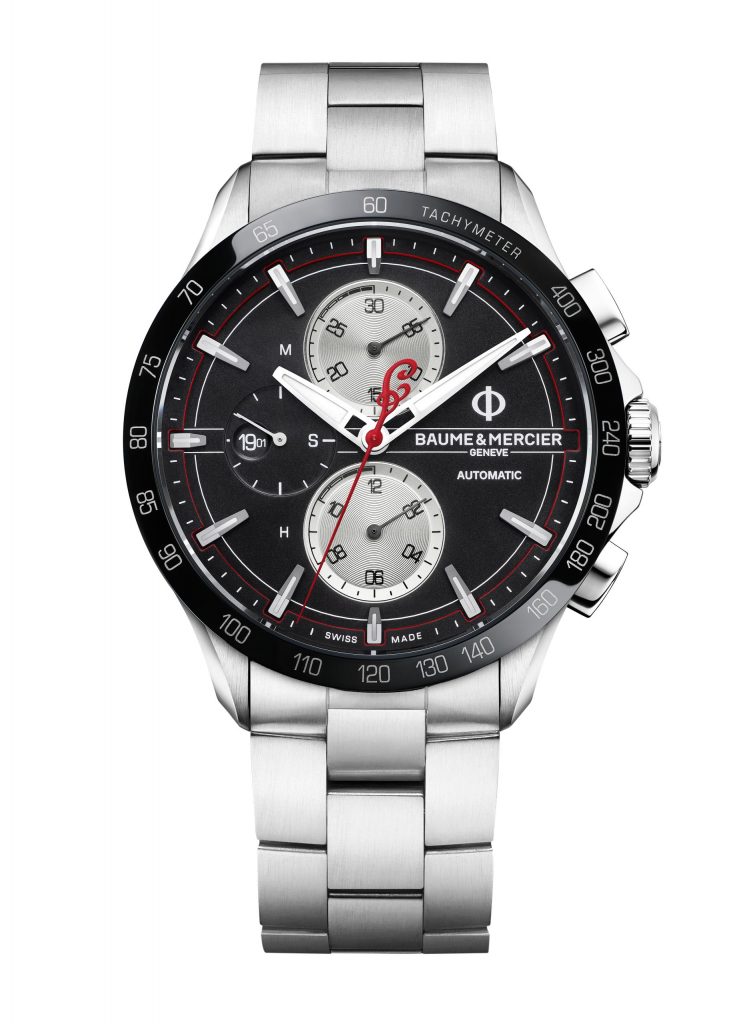 While the Scout exudes super sporty appeal, so, too, does the Chief, but with a bit more finesse – after all, it is the Chief. Also equipped with an automatic movement with 48 hours of power reserve, and with the black ADLC coated fixed bezel with tachymeter scale, this chronograph — with vertically placed subdials — features an opaline black dial with silvered subdials and bold red central seconds hand and stylized “I.” Instead of a leather strap that will develop its own patina over time, the Chief is offered with a three-row stainless steel bracelet with matte- and polished links. 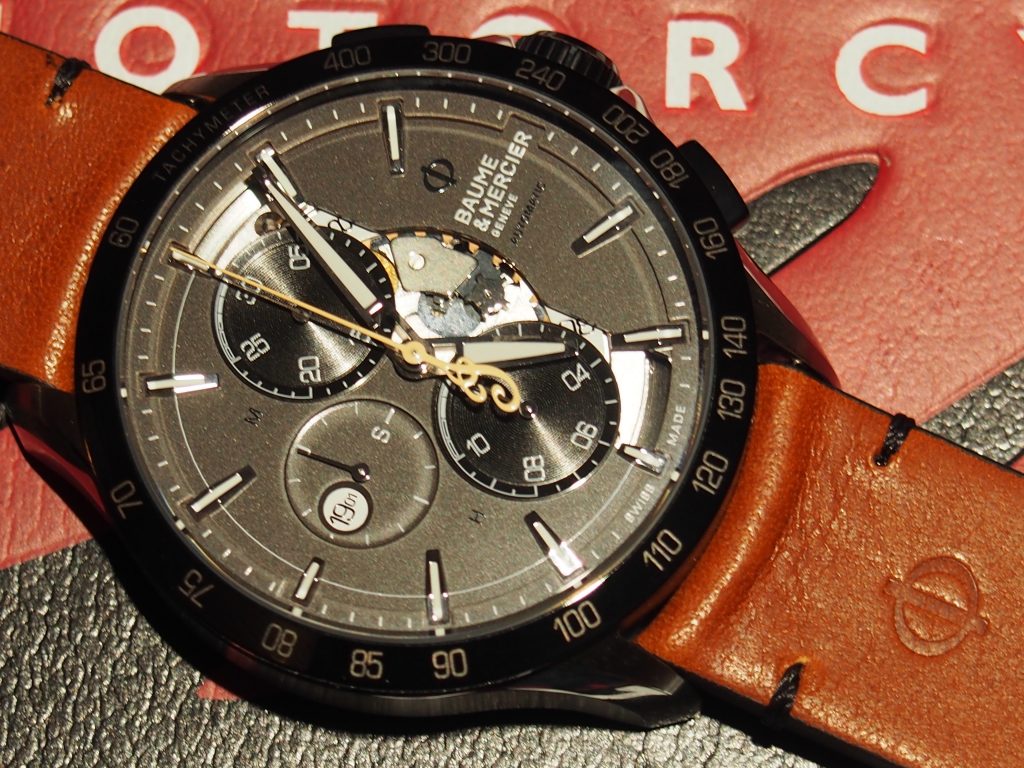 Each of these Baume & Mercier Clifton Club Indian® Legend Tribute watches is created in a limited edition of 1,901 pieces and each retails for $3,900. 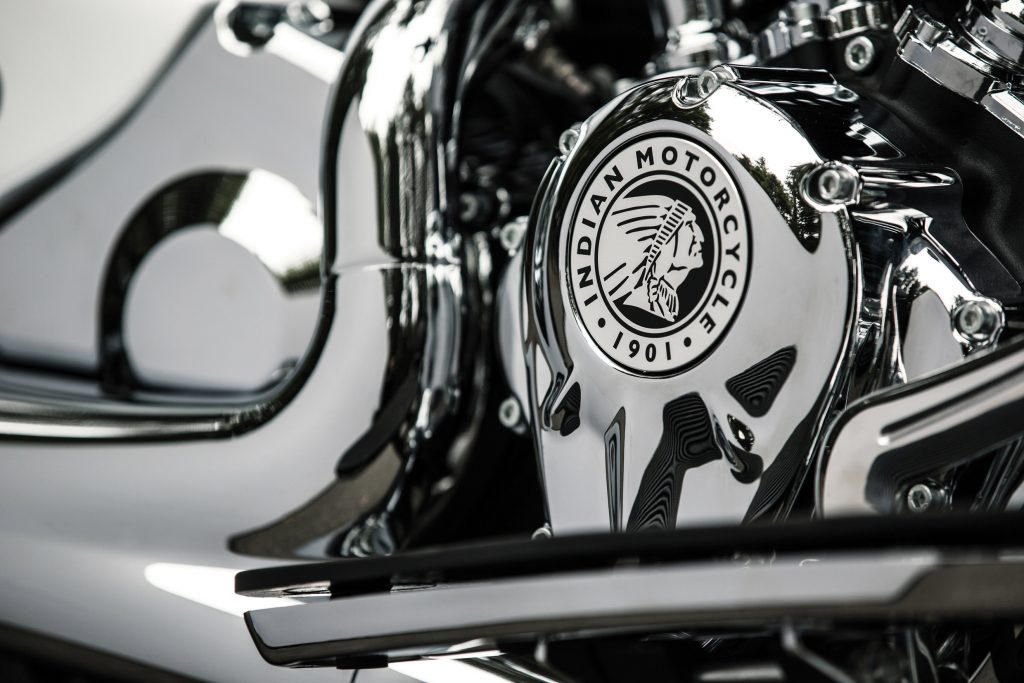 Each of the Baume & Mercier Clifton Club Indian Legend Tribute watches is created in a limited edition of 1901 pieces (the year Indian Motorcycle was founded.