Hands On: Omega Speedmaster Watches 2019 As Seen At The Swatch Group Summit 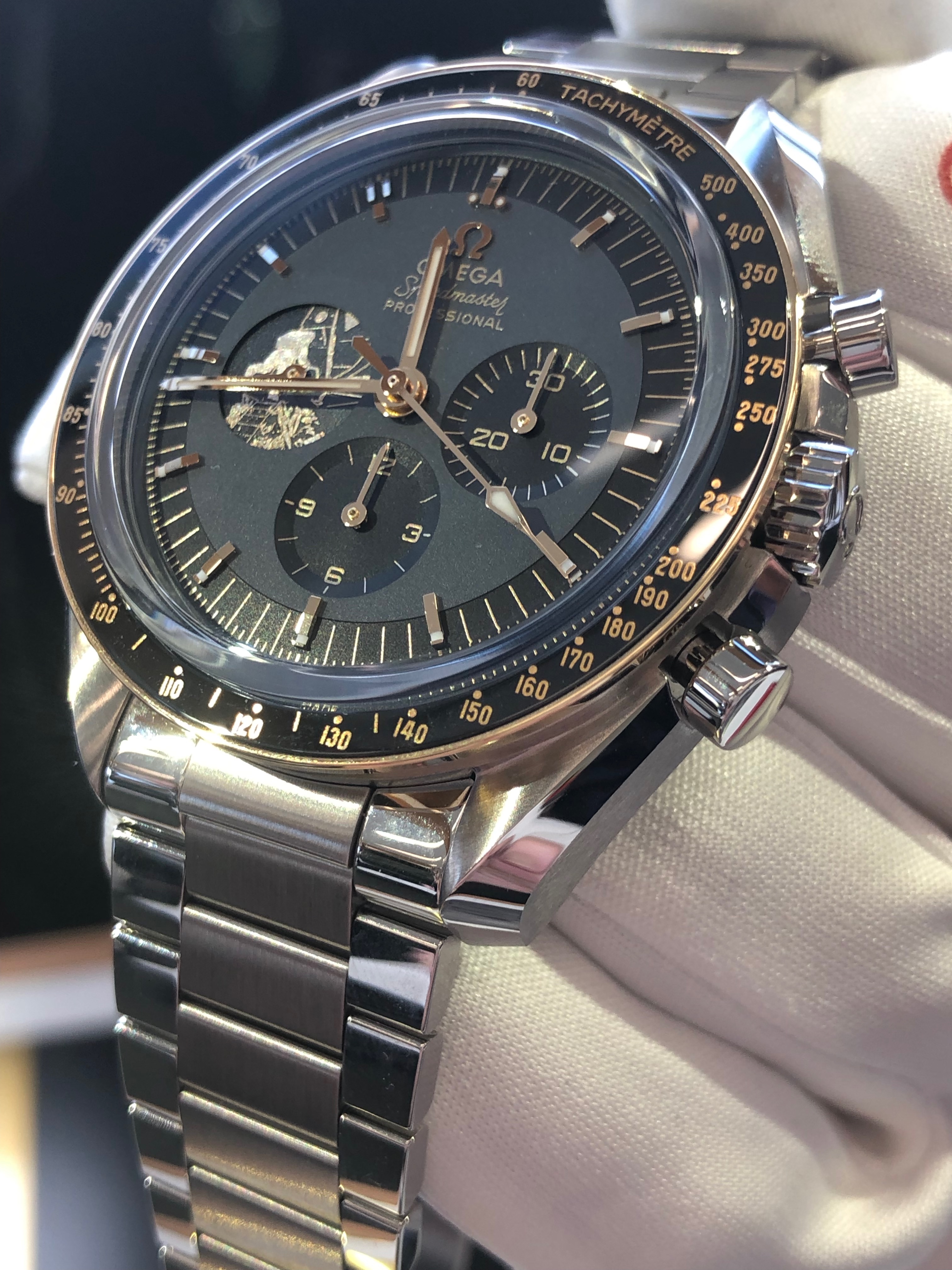 Omega Speedmaster Apollo 11 50th Anniversary watch with inset sundial of astronaut climbing down the ladder on the moon’s surface.

Just a few months ago, I had the distinct privilege of joining the Swatch Group for its first-ever summit for watch journalists. We traveled to Switzerland to visit the six luxury watch brands owned by the Swatch Group. You can read an in-depth look at that Swatch Group Time to Move Summit experience here. One of the greatest things about being there was getting a hands-on experience with all of the brand’s newest watches. Now, with fall around the corner, many of those timepieces are making their way to stores. While the brand unveils some new men’s Globemaster pieces, Seamster watches,   Constellation watches and more, today, we are taking a close-up look at the 2019 lineup of Omega Speedmaster watches.  (Throughout the coming weeks, we will visit the other new collections from Omega, as well as the newest watches from the other Swatch Group luxury bands. Visit regularly.) 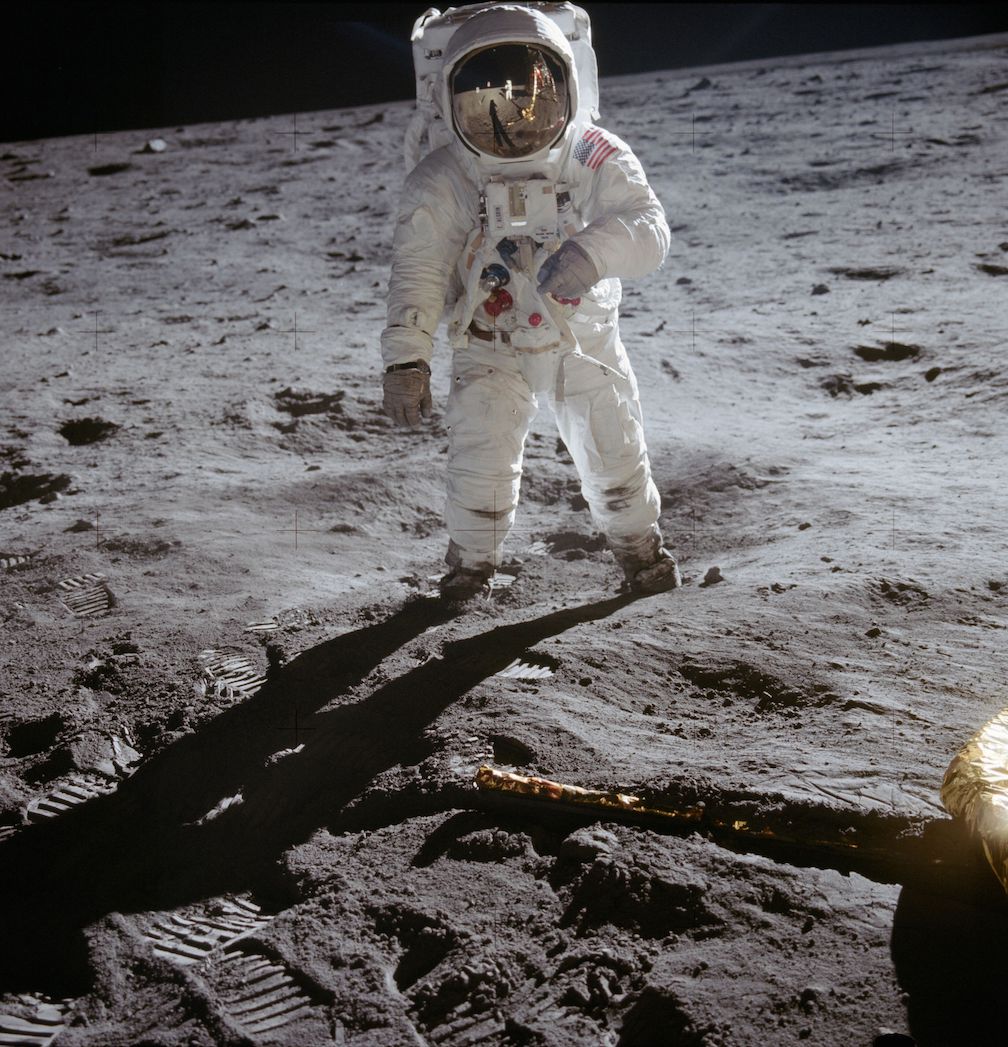 Omega has a long and highly esteemed relationship with the Apollo missions.

“As it relates to the American space program, Omega is perhaps best known for its so-called 14-seconds of fame — when the ill-fated Apollo 13 mission to the moon had to be aborted and the crew needed to use their Omega watches to properly time the 14 seconds they needed for the fuel burn-off that would enable their return to Earth. For this Omega was honored with the highest distinction from NASA: the Snoopy Award. However, Omega was also the first watch on the moon. It was 50 years ago today, on July 16, 1969, that the Apollo 11 mission – the first to put man onto the lunar surface – launched.  Four days later, on July 20, man stepped foot on the moon. With them: the Omega Speedmaster. 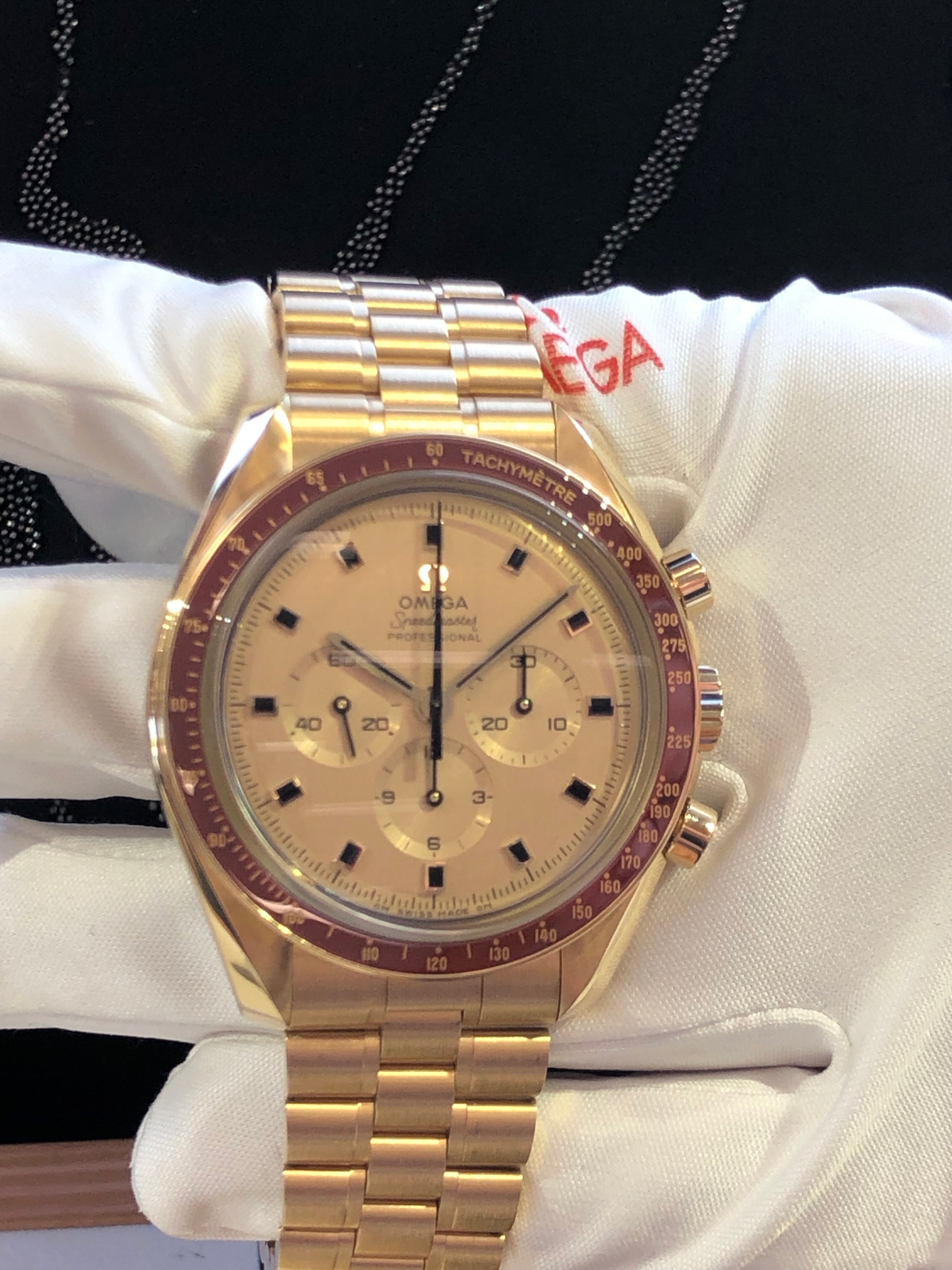 This year, as we celebrate that 50thanniversary, Omega – which was part of the space program since the Mercury missions — creates two tribute watches that recall that moment in history and Omega’s starring role as first watch worn on the moon. Both watches are anniversary issues dedicated to the fact that Omega was deemed to be “Flight Qualified for all Manned Space Missions” in 1965 after surviving grueling tests for endurance in harsh environments. That qualification set the scene for the ensuring space missions and the subsequent moonwalks by astronauts Buzz Aldrin and Neil Armstrong.

The two new watches created by Omega include one that is a replica of watches made for astronauts in the NASA space program and given out at a dinner in fall of 1969. That watch was 18-karat yellow gold. Thanks to technology and advanced materials, Omega was able to update the new 50thAnniversary Omega Speedmaster Apollo 11 watches with newer, more innovative materials and movements and materials. In fact, the Omega Caliber 3861 manual wind movement that is a Master Chronometer powers both limited-edition watches. 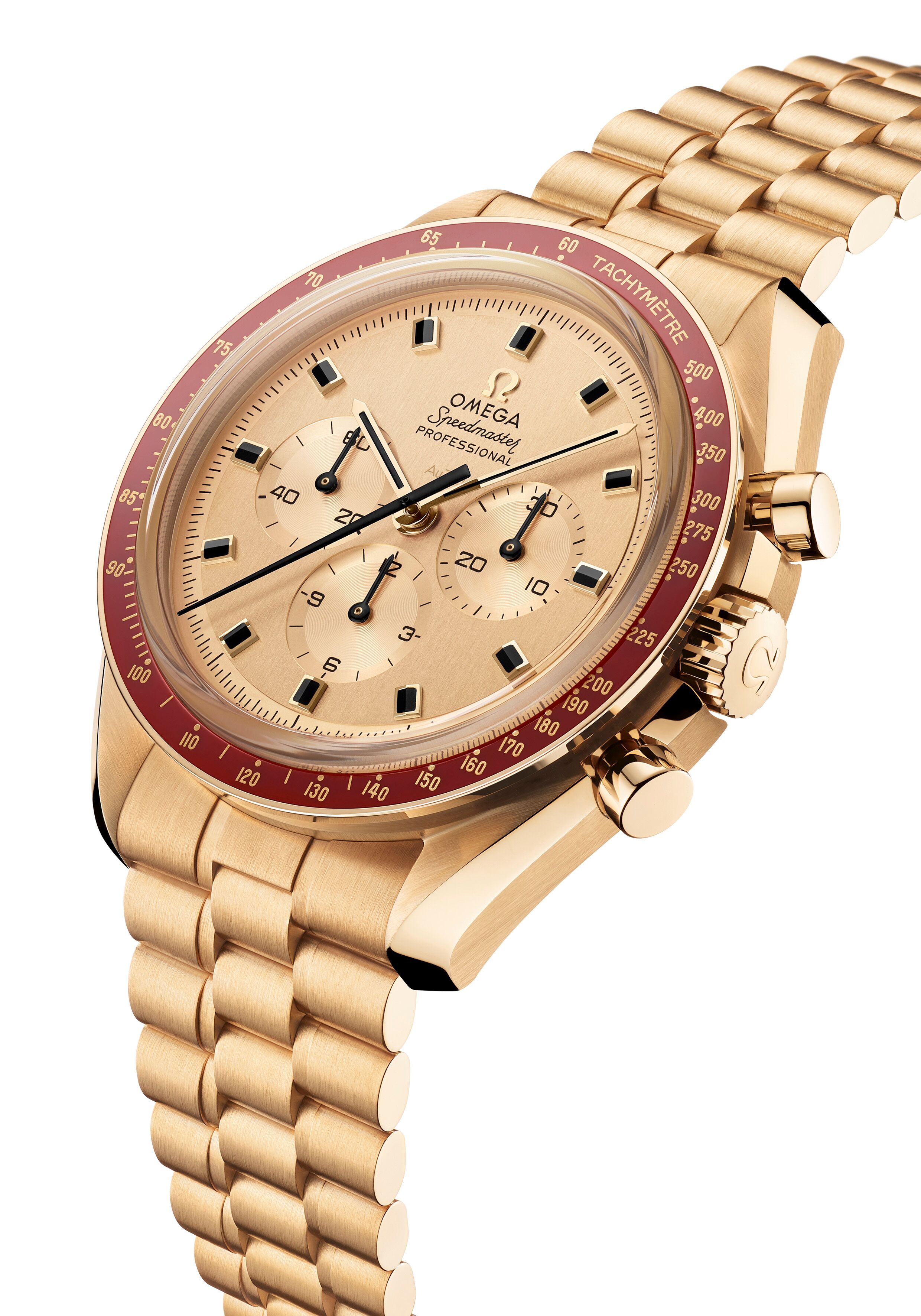 The 50thAnniversary Omega Speedmaster Apollo 11 version that replicates the watch given to the astronauts in 1969 is built in 18-karat Moonshine™ gold. The gold is an alloy and – while yellow in hue – actually is toned down a bit and has an almost white cast to it to emulate the white/yellow shimmer of the moon.  The watch features a burgundy bezel like the original, however, it is created of ceramic with Omega’s proprietary Ceragold™ for the tachymeter scale.  It’s caseback bears the 50thanniversary dates: 1969-2019, and the words “The first watch worn on the moon.”  Thanks to a double laser engraving process, there is a tiny plaque that depicts America as seen from space. Just 1,014 pieces will be made, each retailing for  $34,600. 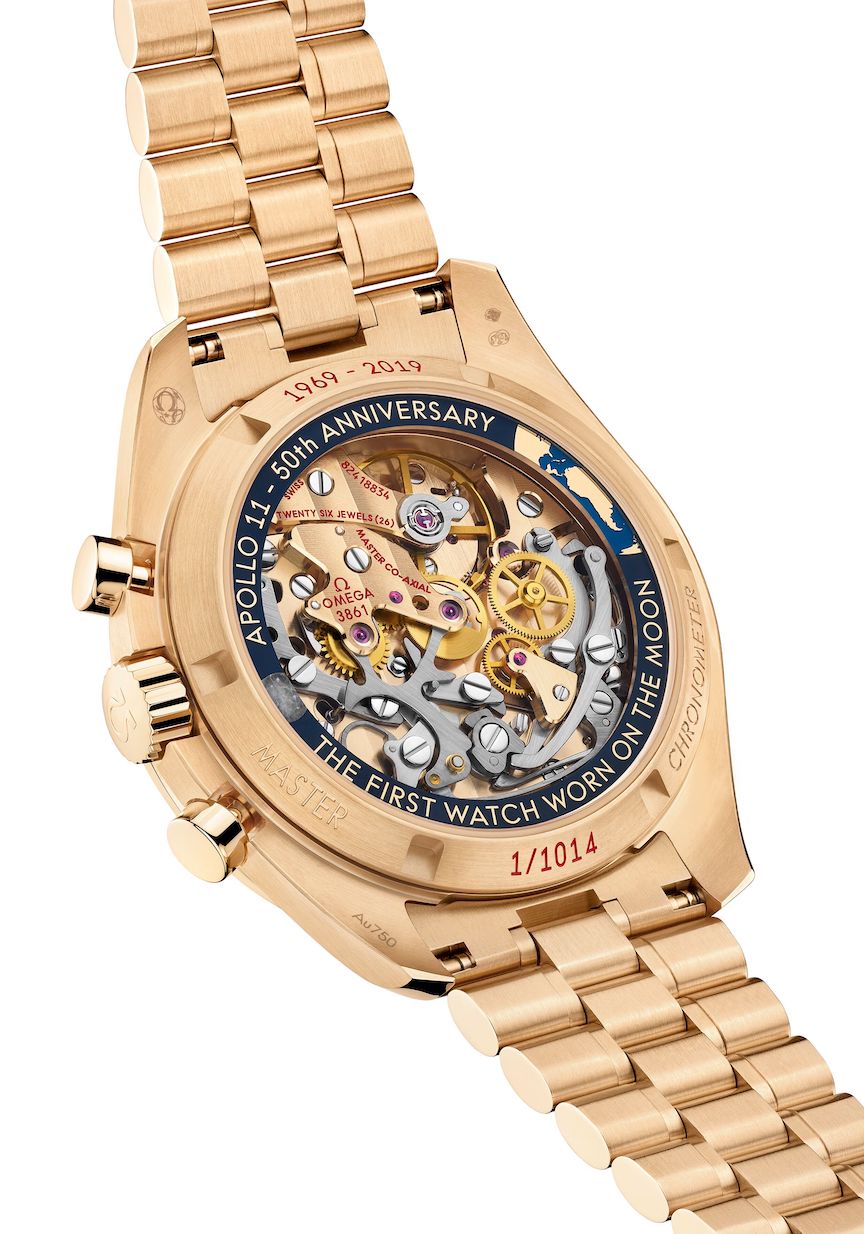 The casebook of the Omega Speedmaster Apollo 11 50th Anniversary watch has an inset of a view of North America from space.

The second watch created in honor of the 50thanniversary is crafted in stainless steel. It features a black ceramic  bezel with tachymeter scale in Ceragold™.  The dial is slate gray with gold accents and black outer chapter ring for the minutes. It uses Moonshine gold for the vintage Omega logo and indexes.  In the chronograph subdial at 9:00, there is an engraving of the lunar landing.  The caseback of this watch features a partial footprint on a black moon surface-like plate with the famous words spoken by Aldrin when he stepped onto the moon’s surface:  “That’s One Small Step For A Man, One Giant Leap For Mankind.” This version, which retails for $9,650, is being built in a limited edition of 6,969 pieces. It is presented in an astronaut kit box with a small moon landing module and two mission patches that honor the 50thanniversary of this monumental event.”  (NOTE: This “space” portion of the article was first published on my Perfect Timing column on Forbes.com.) 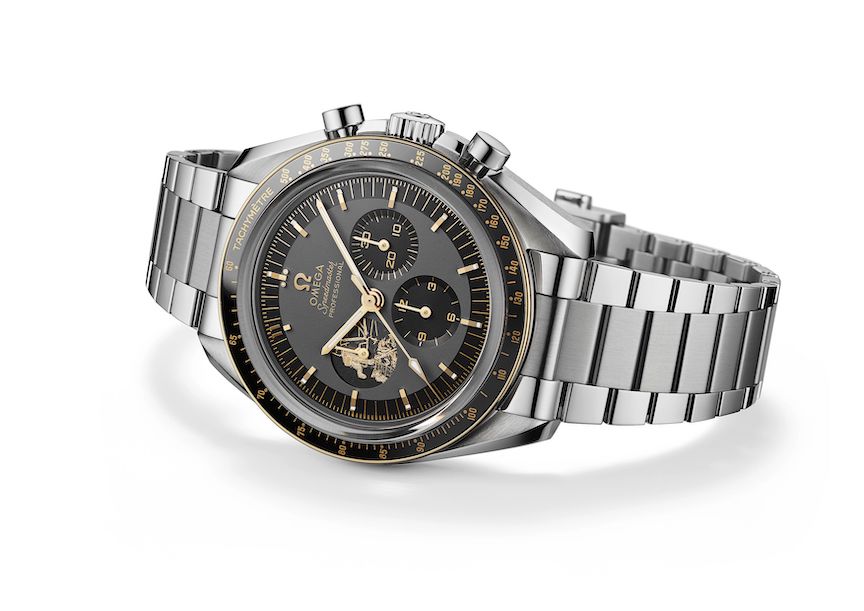 This version of the Omega Speedmaster Apollo 11 50th Anniversary watch features a sundial with astronaut climbing down the ladder on the surface of the moon.