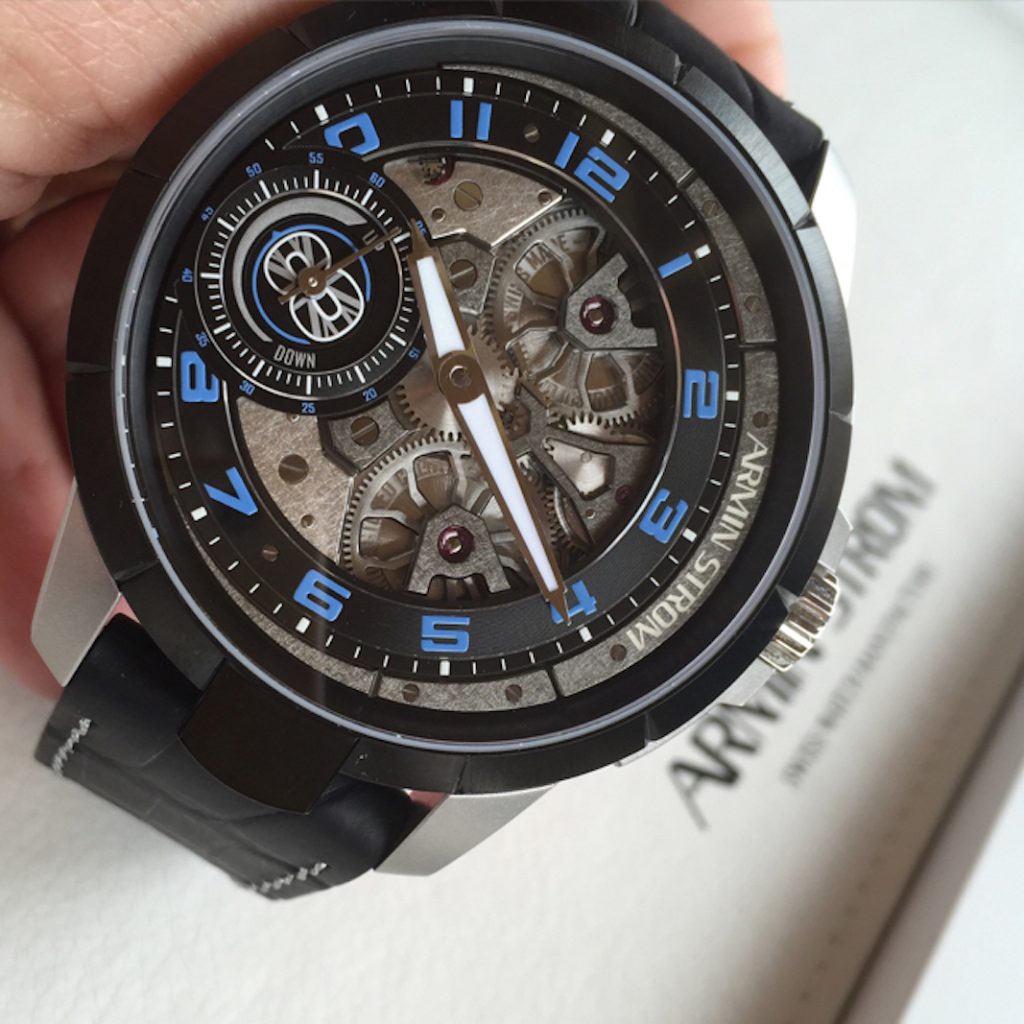 It was an exciting weekend at Texas Motor Speedway, where the Firestone 600 Verizon IndyCar Series’ was supposed to take place. Not only were there dozens of cars and drivers set to race wheel to wheel on the mile and a half banks, but also Armin Strom was in full throttle to role out its newest timepiece, created in cooperation with brand ambassador and racecar driver Max Chilton, who had design input into the new Max Chilton Edge Double Barrel Limited Edition watch.

While thunderstorms, pelting rain and fierce lightning put a damper on the races and caused a postponement of the Firestone 600 until August, Armin Strom went full speed ahead with the unveiling of the new line. Not only did we have the opportunity to walk the pits and garages (despite the dark skies), but also to meet Max Chilton, talk for a bit about the watch and his role with Armin Strom, and see the watch up close and personal. 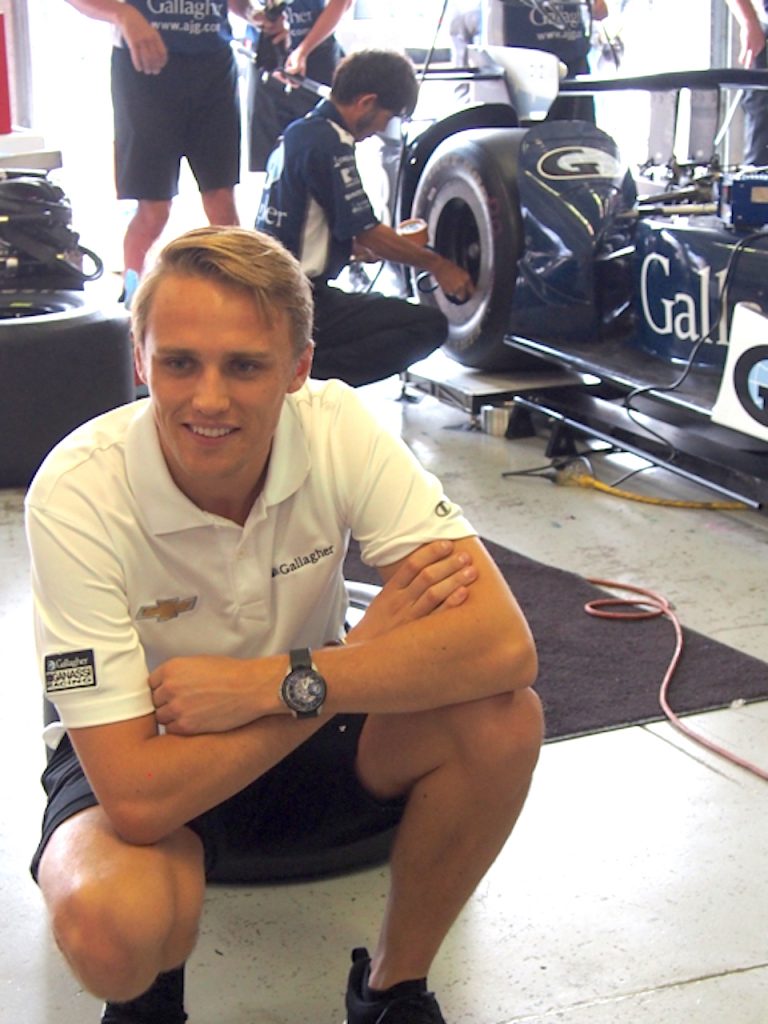 Chilton, F1 driver turned IndyCar driver this year, is also an avid watch lover. In fact, he bought his first Armin Strom watch before he was even working with the brand as an ambassador. He became familiar with the brand about four years ago when he was an F1 driver and Armin Strom had a relationship with the now-defunct Team Marussia. At that time, Armin Strom was building its Racing collection – using parts from actual Formula 1 racecars. Chilton, then also an F1 driver, ordered a custom piece, and Armin Strom personally delivered the watch to him aboard a yacht in Monaco. From there, they struck up a friendship, and ultimately this brand ambassador partnership.

“I am a watch fan,” says Chilton, while in the garage as his team (Gallagher/Chip Ganassi Racing) readies the car for racing. He takes quick note of the Armin Strom Tourbillon Air on my wrist (it was a loaner, I am sad to say) and immediately recognizes it. “Oh, you are wearing the tourbillon. It’s one of my favorites.” He then takes his own Edge Double Barrel watch off his wrist and hands it to me. “Have you seen the new watch yet?” I hadn’t. It wasn’t supposed to be unveiled by the brand until the next day, but we studied it together anyway. He said he had a lot of fun adding the sporty details to the watch and working with the team. 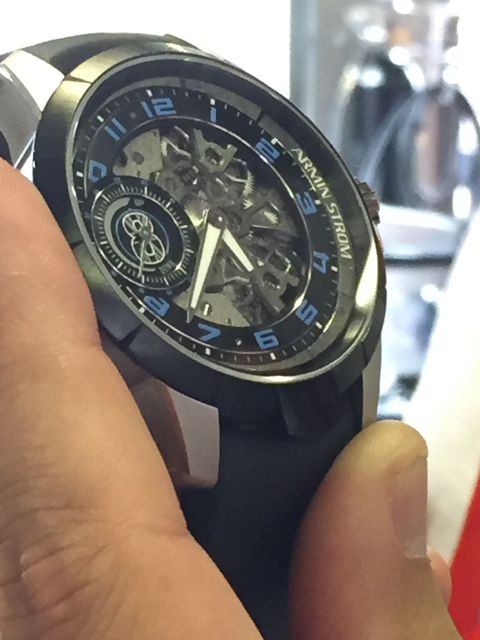 Chilton took the new Armin Strom Edge Double Barrel watch off his wrist to show me the colors and details that he helped with. (Photo: R. Naas)

In fact, Chilton had definitive input on the design of the Edge Double Barrel Max Chilton watch – which incorporates his IndyCar number – 8 – into the design. The 8 appears in the small-seconds subdial, which is also where  the power reserve indicator is,  and is created using the Union Jack flag, paying homage to Chilton’s Great Britain homeland. Additionally, the watch, which, coincidentally has eight days of power reserve thanks to its double barrels, features bold blue hour numbers that match the blue of his racecar and team colors. The caseback is etched with his “Max” logo. 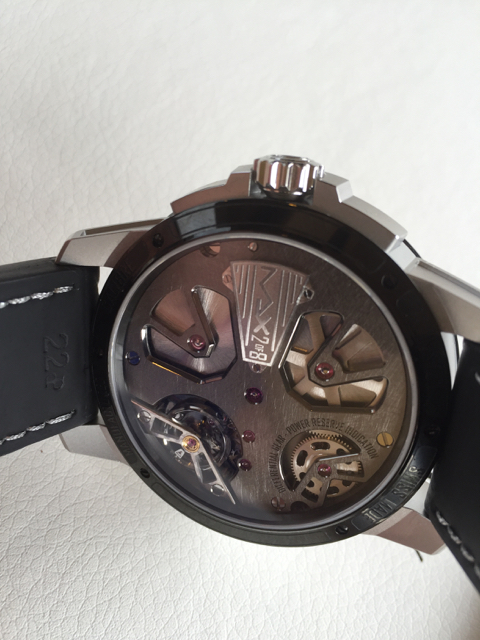 The watch is powered by the in-house-made ARM 16 manual-wind caliber with 8 days of power reserve and 194 parts. (Photo: R. Naas)

The manual movement of this watch, ARM 16, is made in-house by Armin Strom and features the brand’s signature angular components. It offers off-center time indications and, as mentioned, a small subsidiary seconds dial. Additionally, in its continuous effort to stand out from all others, Armin Strom finishes the 194 movement parts in unconventional   motifs, including a cross-grinding decoration on the hand-beveled bridges. Even the bezel of the 46.8mm watch features a series of cut outs that add depth and dimension – and recall the original look of the new Edge series introduced at Baselworld this year by the brand.

The watch is crafted in PVD black stainless steel with a sapphire crystal and caseback that allows viewing of the stunning caliber. It is sold with a black alligator strap and an additional black rubber strap.  Just eight pieces will be made, commemorating Chilton’s participation in the North American Verizon IndyCar Series this year. Chilton is the proud owner of the Number1 piece.  Zoom to the stores if you want one of these babies, because – as we understand it—another was already sold as of this weekend. The retail price: a zipping $27,700. 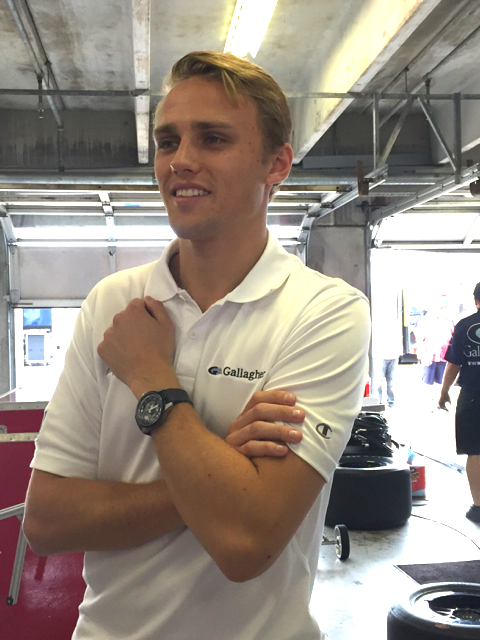 Chilton is an avid watch lover and takes real pride in having a hand in the design of the newest Armin Strom Edge Double Barrel. (Photo: R. Naas)