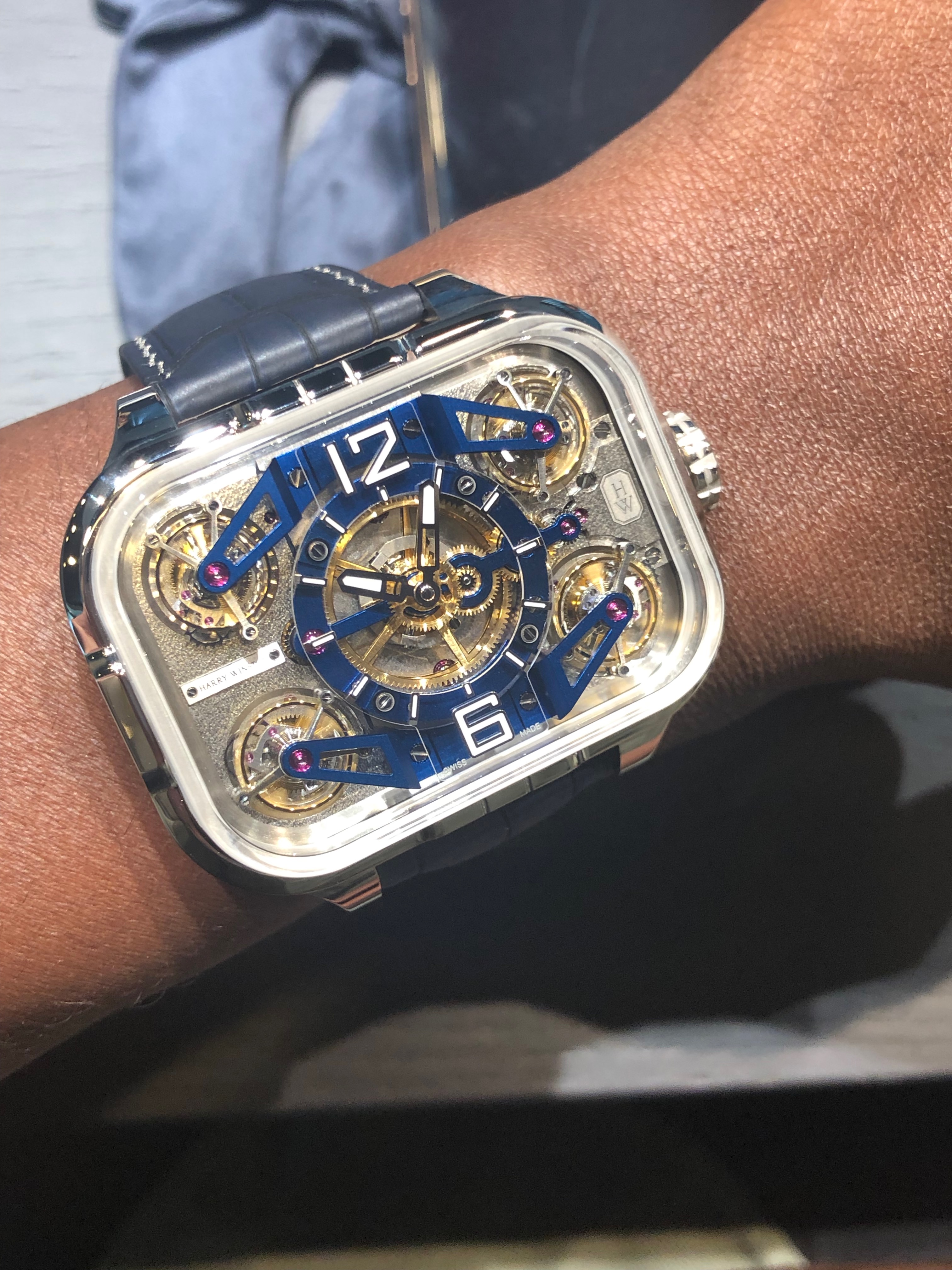 Hands on with the Harry Winston Histoire de Tourbillon 10, the final watch in the series.  (Photo: R. Naas) 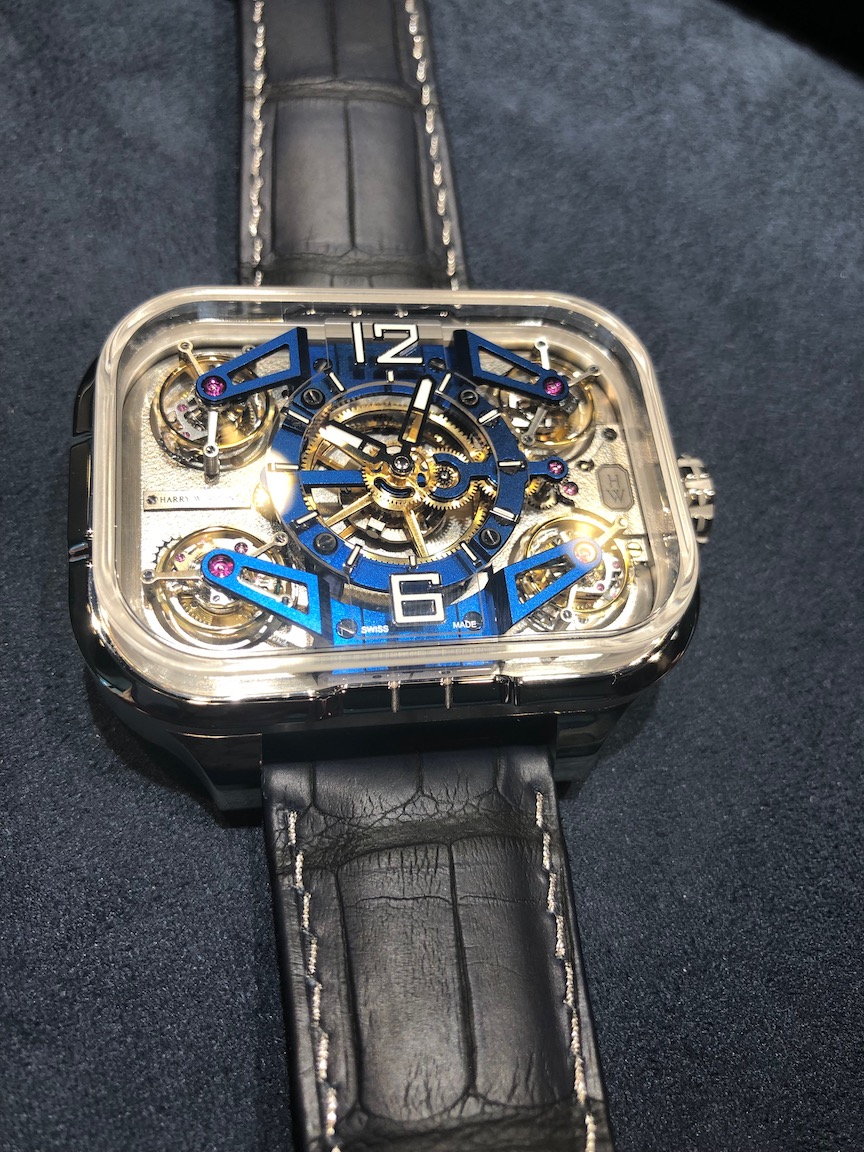 This version of the Harry Winston Histoire de Tourbillon 10 is in platinum with blue tourbillon bridges. (Photo: R. Naas) 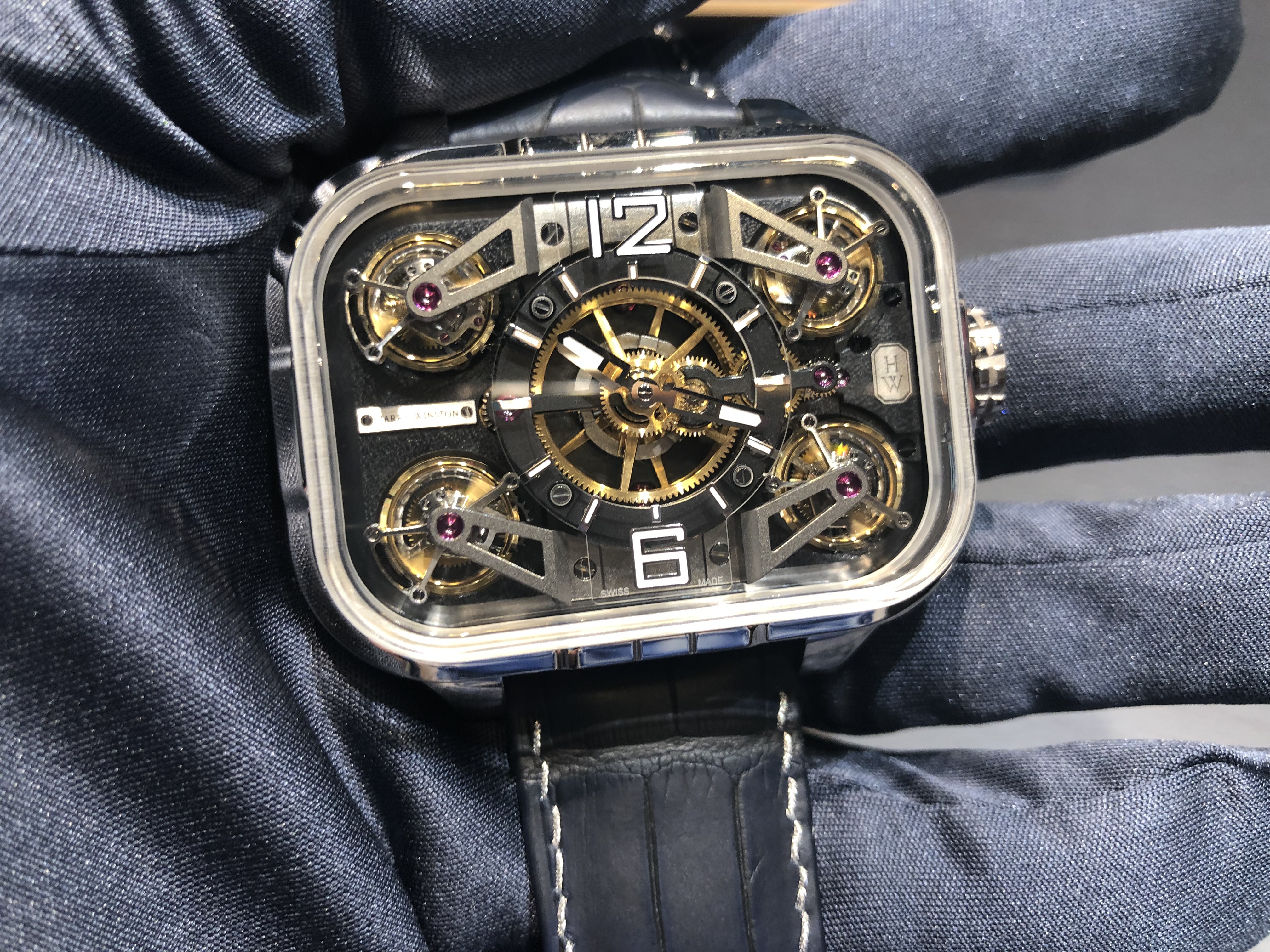 In order to achieve optimum chronometry, the master watchmakers involved in  making the 10  have unified the four tourbillons with  three differentials that tie them together. One differentail connects the two tourbillon cages on the left side of the dial, the second connects the cages on the right side of the dial. The third differential is located in the center, and is responsible for averaging the other two differentials. This, along with two pairs of fast-winding barrels placed on top of one another and then connected to the tourbillons, ensures the energy is distributed evenly.

Another important factor adding to the precision of the watch is the speed of the tourbillon cages. While most tourbillons rotate for 60 seconds, the tourbillons on the 10 are all faster, rotating once every 36 seconds. This offers 55 hours of power reserve. 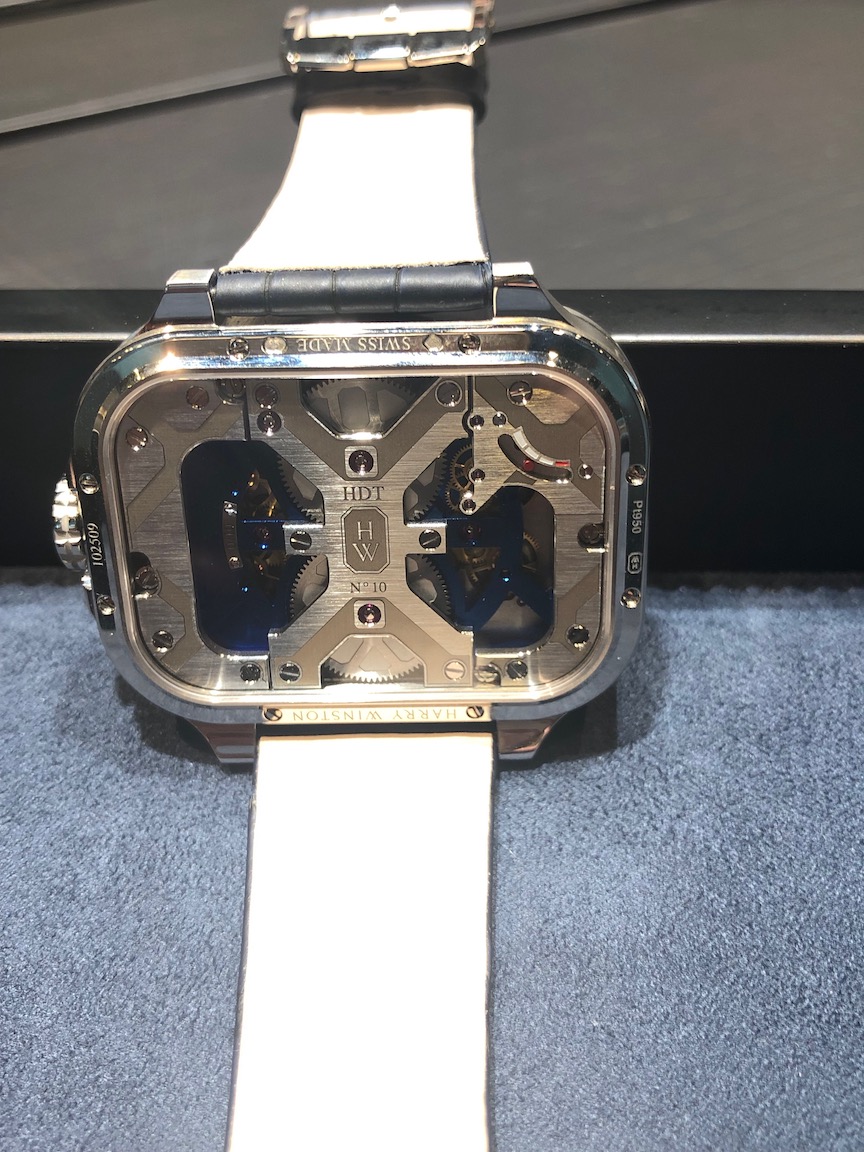 The caseback of the Harry Winston Histoire de Tourbillon 10 has a rugged appeal to it. Most of the movement is visible dial side.

The HW4702 caliber  consists of an incredible 673 components,  including two transverse bridges that  round out the  symmetry. The case measures 53.3 mm wide (x 39.1 mm tall) and is offered in one of three different materials: platinum, gold or a single version made of Winstonium, which is a proprietary alloy. Each material has different colored  tourbillon bridges and surfaces. Additionally, each watch features a box-like sapphire crystal for viewing of the dial — which is essentially a  single piece of sapphire with a hollow center for the chapter ring and hour markers. The arches on the top and bottom of the case are designed to reflect the entrance way of the brand’s iconic Fifth Avenue store.  Just 10 will be made, and each is expected to retail for between 700,000 to 770,00 Swiss Francs. 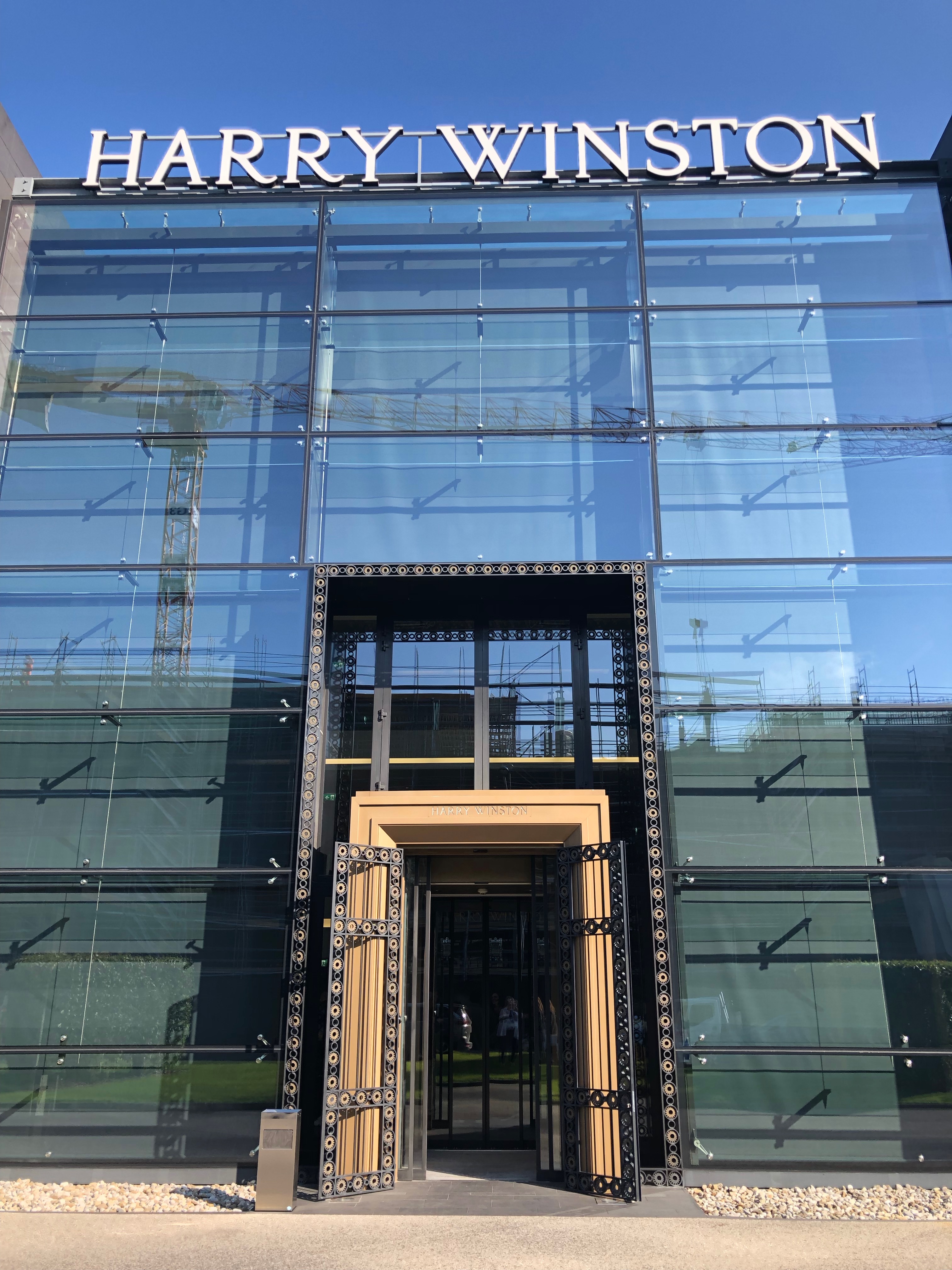 During the visit to the Harry Winston workshops in Geneva, during the Swatch Group summit, Nayla Hayek, CEO of the brand, welcomed journalists. I have had the privilege of interviewing Ms. Hayek on multiple occasions and found that at the workshops, she seemed particularly at ease.  While there, we not only got to tour the watchmaking, but also to witness some of the gem setting and jewelry making from this illustrious brand, as well. In addition to the Histoire de Tourbillon 10, this year is chocked full of new Harry Winston watches, from the Lotus to Metiers d’ Arts mosaic, Project Z, Avenues and more, which we will be bringing  to you in coming months.