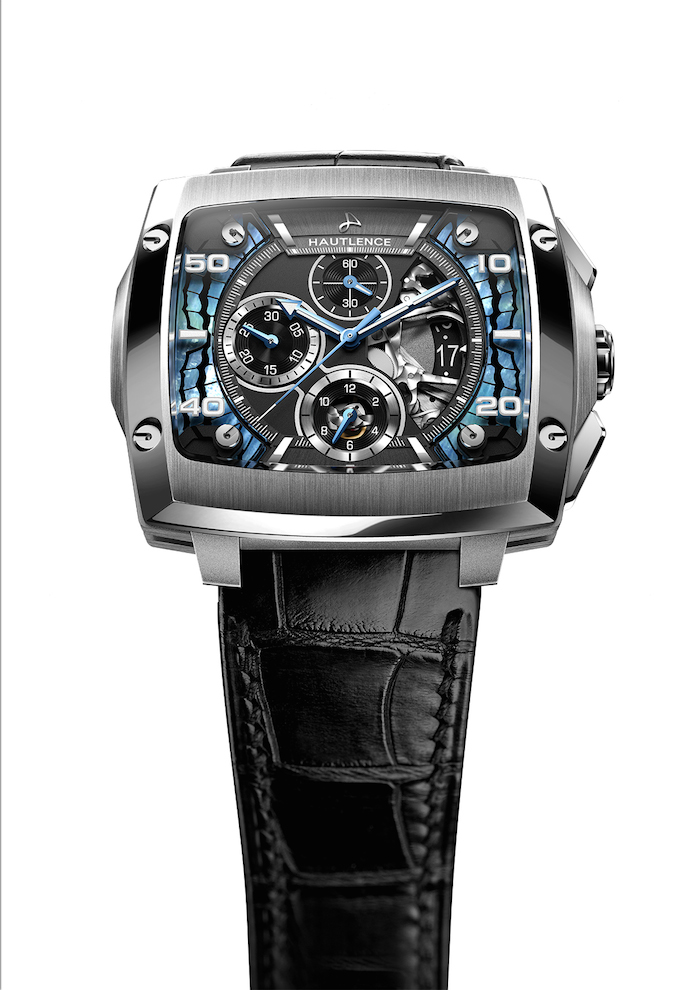 For quite some time, the most highly revered names in the watchmaking industry were those of brands established long ago, and with rich histories. Over the past 20 years, emerging brands have defied this notion, by showing that greatness can be obtained over a short period of time. One brand that most definitely proves this point is the young Swiss horological powerhouse that is Hautlence. With the manufacture’s 10th anniversary this year, one cannot help but look back at the astonishing technical feats achieved by Hautlence and how the brand has truly followed its creed of setting itself apart from the rest. 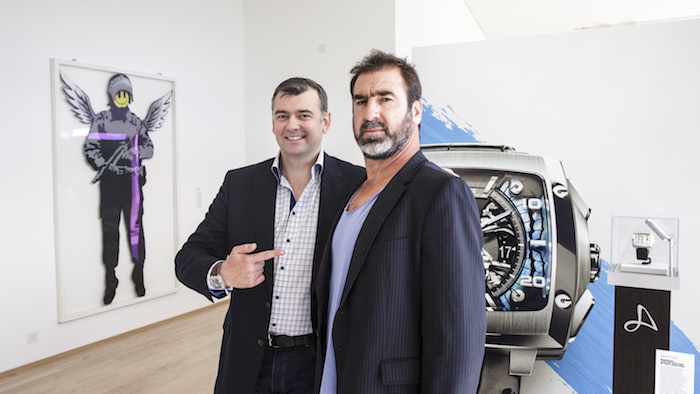 Guillame Tetu and Eric Cantona at the “Cross the Line” exhibition in Switzerland.

Before we take that retrospective walk, however, let us introduce you to the newest addition to the Hautlence family — unveiled in Neuchatel just last week in honor of the anniversary: Invictus Morphos Chronograph. Designed with brand ambassador and champion soccer player Eric Cantona, the self-winding chronograph is named for the butterfly Invictus (symbolizing the ability to change and make something beautiful even more beautiful), and for the Latin translation of the word: “Unbeatable.” The limited edition watch is  created in just 250 pieces in titanium with magnificent blue accents reminiscent of the Invictus butterfly.  The case back is numbered and engraved with Cantona’s signature and digital fingerprint the sign the allows entrance to the Gentlemen Rebels Club (to which all Hautlence owners belong). 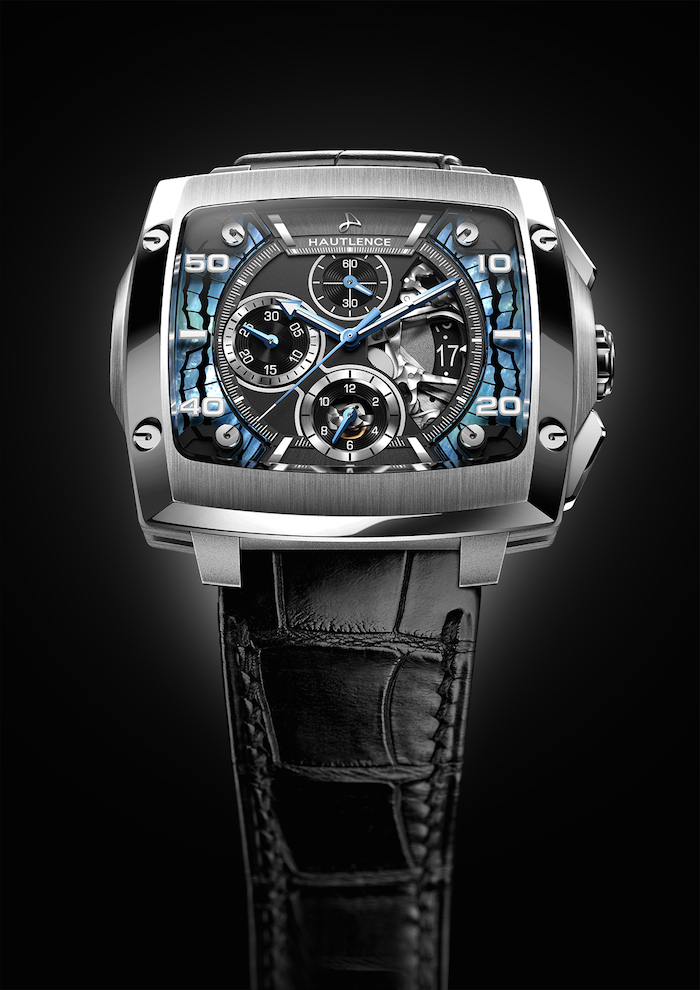 The mother of pearl and blue accents on the dial are inspired by the Invictus butterfly’s colors.

The joint venture between Hautlence and Cantona — and this stunning new timepiece — are indicative of the brand’s genius.  In fact, the creative minds behind Hautlence, co-founders Renaud de Retz and Guillaume Tetu, began their journey on the right foot, as they launched their brand with the idea to develop all of their movements themselves, while incorporating avant-garde complications. This goal was realized when the brand’s inaugural HL collection was introduced in 2005. Hautlence made quite the splash in the world of haute horology, as this first offering’s manually-wound movement featured a jumping hour, retrograde minutes counter, and a trailing seconds hand, all presented in the brand’s now signature look (with the time in a “spread out” manner with several levels and facets to the dial). You can’t deny just how impressive that approach was for a brand with only one year under its belt. 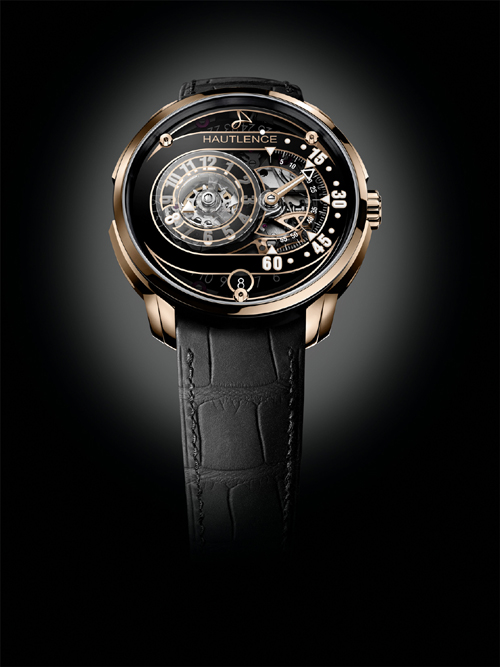 Hautlence HLRQ01 from the Avant-Garde Collection

The next six years further displayed Hautlence’s philosophy of creating timepieces in a “creative, free, and agile” way, as the brand would unveil a total of three additional in-house calibers. The first of the three was the HLQ – a hand-wound movement that, similar to the HL, incorporated the same jumping hour and retrograde minutes, but with the added function of a fast-correcting jumping date indicator. This would be followed by the less complicated HLC, and the HL2.0, the brand’s first self-winding caliber that displayed the hour using a half-trailing chain. While these specifications may bore and confuse those not well-versed in horology, a true watch aficionado is most likely drooling at this point as we recall the feats of Hautlence. 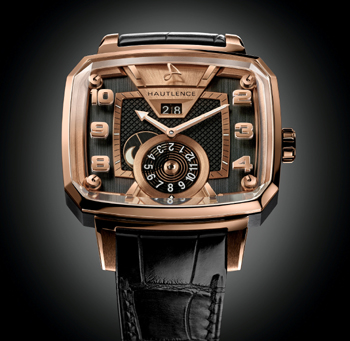 Despite the plethora of horological excellence, Hautlence has gone through its share of tough times. Largely due to the lack of more affordable pieces in the collection, and the influence of the sagging and difficult global economy, Hautlence saw sales begin to decline in 2008, and eventually had to file for bankruptcy in 2012. While the market may have not fully understood the brand’s genius and goals, Georges-Henri Meylan of MELB Holding, and former CEO of Audemars Piguet, saw the potential and bought into Hautlence. The combination of Meylan’s industry know-how, MELB’s backing, and Tetu’s original vision helped Hautlence reposition itself, and essentially move forward with some more affordable collections joining the haute horlogerie line-up and making it a much stronger brand. 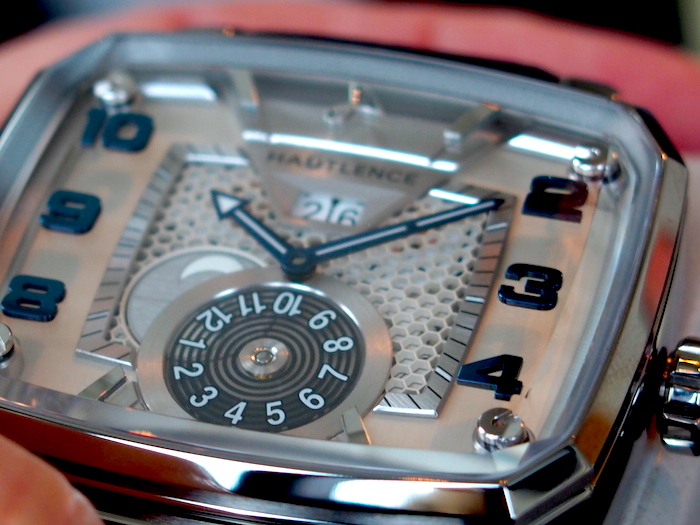 The results of the restructuring and revision of the brand, along with the acquisition by MELB, can now be seen through the latest release, the Destination – a Soprod-based piece, starting at a considerably more affordable 20,000 CHF. Thus, today, with just 10 years under its proverbial belt, Hautlence has developed four in-house calibers and created a trademark aesthetic – no small feat for any brand. With that said, we here at ATimelyPerspective can’t wait to see what the coming years will bring.