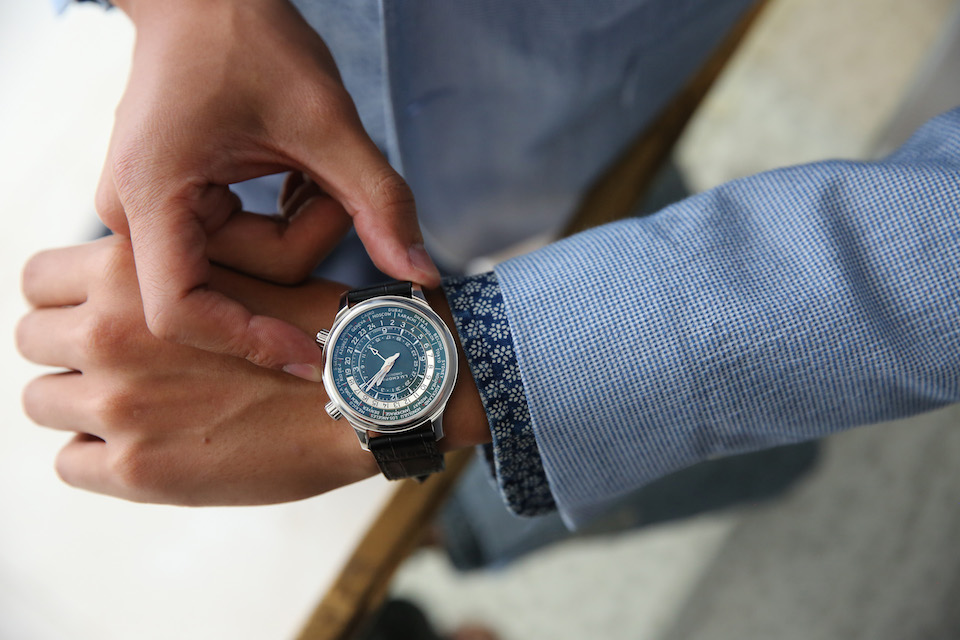 Chopard, a brand known for its technical and design prowess in the world of watches, celebrates the 20th anniversary of its L.U.C Manufacture in Fleurier — where the brand focuses on the highly technical job of creating in-house movements and top-quality mechanical watches. In honor of its two decades of success, the brand unveils the L.U.C in-house-made Time Traveler One and L.U.C GMT One watches.

I remember the opening of the works hops as though it was yesterday, I was one of the first to be granted an inside tour. I also was fortunate enough to tour the Manufacture on its 10th anniversary – noting how far the company had come in the expansion of high-technology watchmaking, detailed craftsmanship, the creation of so many of its own movements and of new timepieces.

Below, we bring you a look at the evolutions of the brand. its movements and watches – all developed in two short decades. But before we get to that, we want to show you the exciting new watches made in honor of the anniversary and to celebrate today’s busy traveling lifestyles. 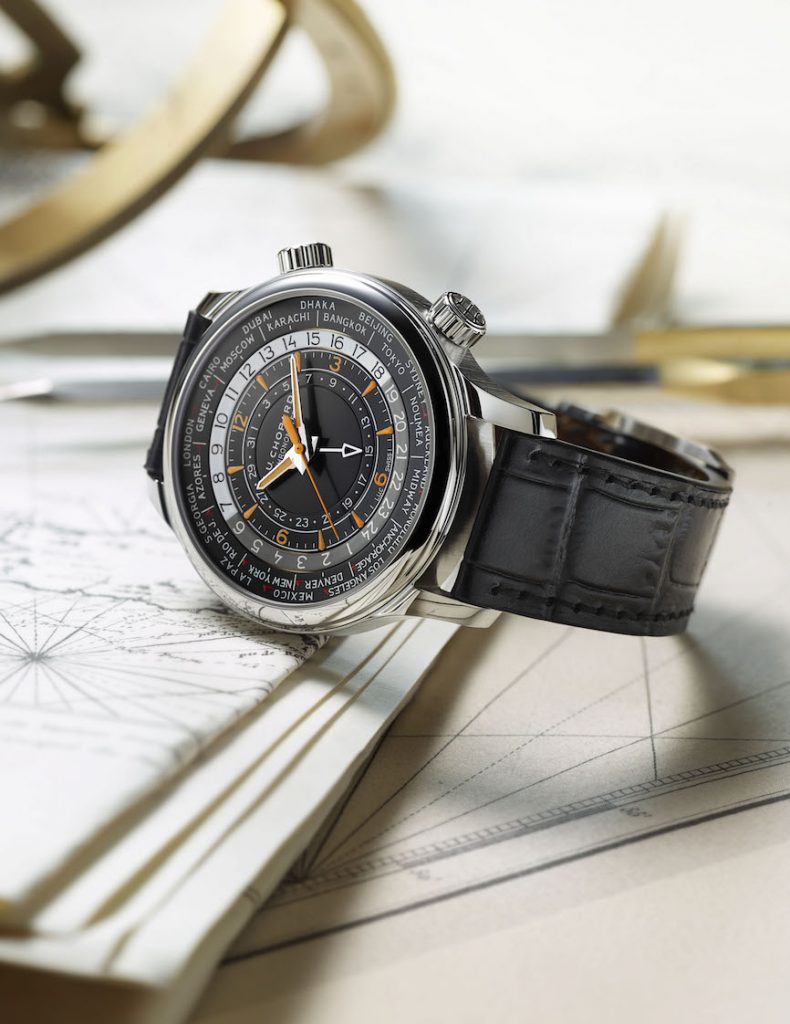 The L.U.C Time Travel One features concentric layers on the dial to display the date, local time and 24 main time zones around the world.

The L.U.C Time Traveler One is a beauty both inside and out. The watch marks the very first Chopard World Time watch and is designed with concentric layers to display the date, local time and 24 main time zones around the world. Created in three alluring versions — stainless steel for $12,800, 18-karat rose gold for $22,500, platinum for $32,200 – with different dial choices. The L.U.C Time Traveler One watches are all COSC-certified chronometers — like all L.U.C watches built ever since the creation of Chopard Manufacture in 1996. 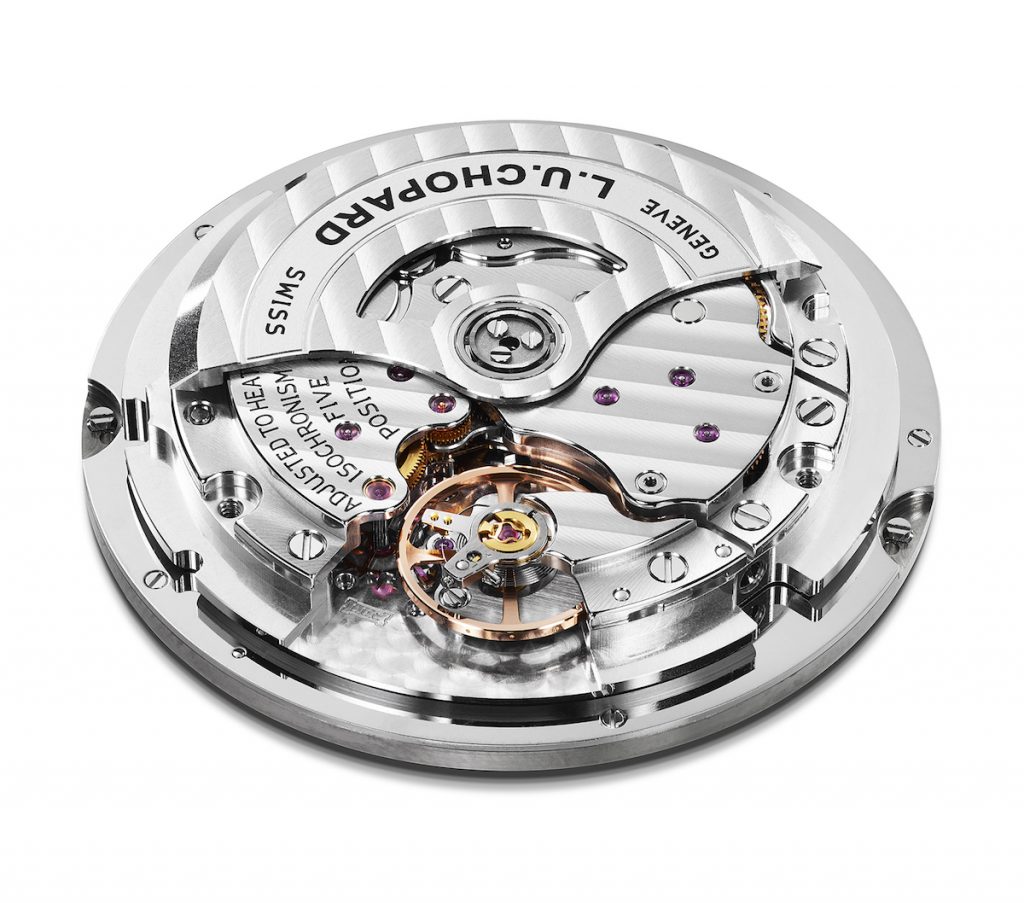 Like all L.U.C movements, this Chopard L.U.C Time Traveler One is a COSC certified chronometer.

This watch is one of the most easy-to-read, and easy-to-use world time watches on the market. Essentially, central hand indicates the date, while an outer railway track depicts the hours and the minutes of the local time zone (adjusted via a crown at 2:00). Moving further out on the dial, there is a large 24-hour graduated ring with the 24 main time-zone cities on it. Once the cities are synchronized with the local time (via the crown at 4:00), no further adjustment is needed. Each of the versions is 42mm in diameter and just 12.09mm in thickness—to tuck nicely beneath a shirtsleeve and suit jacket. 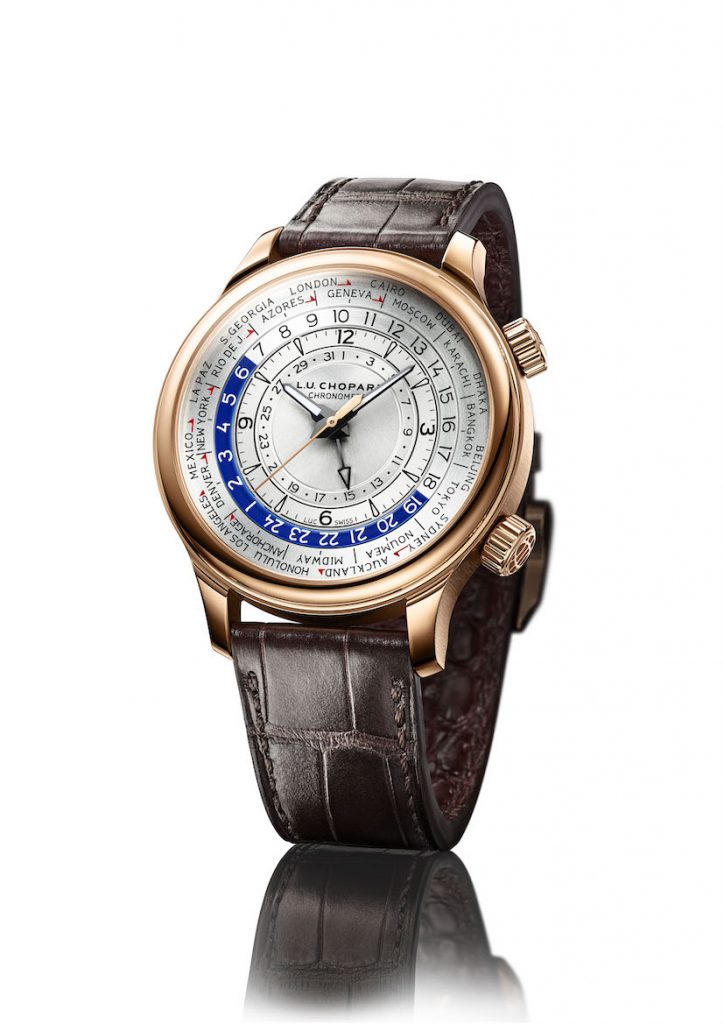 The watch is powered by an all-new calibre – developed, produced and finished, in the L.U.C Chopard Manufacture. The   Calibre 01.05-L is a self-winding movement with 60 hours of power reserve. The 262-part movement, with 39 jewels beats at 28,800 vibrations per hour (4 Hz). It is, of course, meticulously finished, with that craftsmanship visible via a transparent sapphire case back. 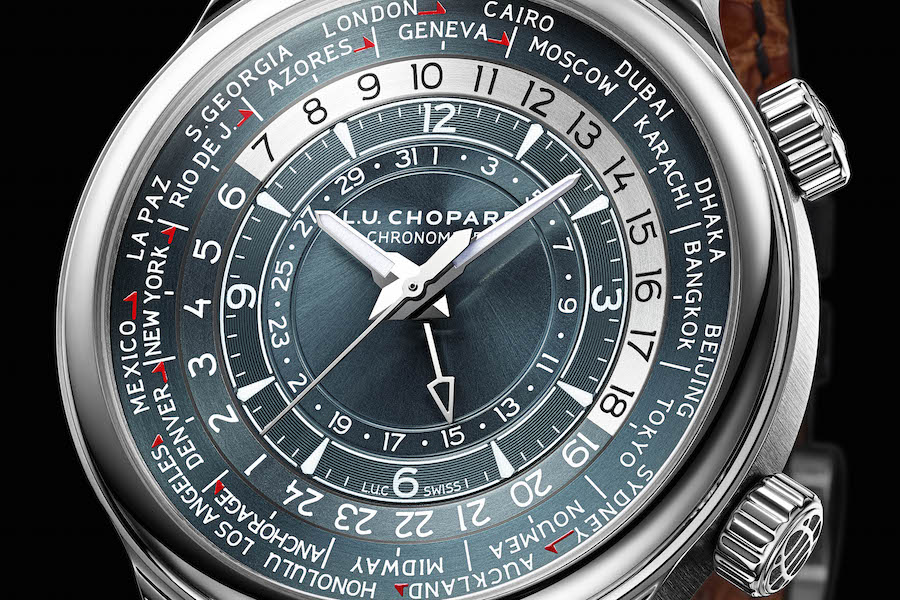 The dial offers a wealth of information including day and night indicator around the world.

The layered dial of each L.U.C Time Traveler One – while different in galvanic color treatment and hand/marker materials – is a work of art and elegance with a sunburst satin-brushed dial and Super-LumiNova painted hours and markers. Offering hours, minutes, seconds and date, as well as city display and GMT function, the watch is water resistant to 50 meters. 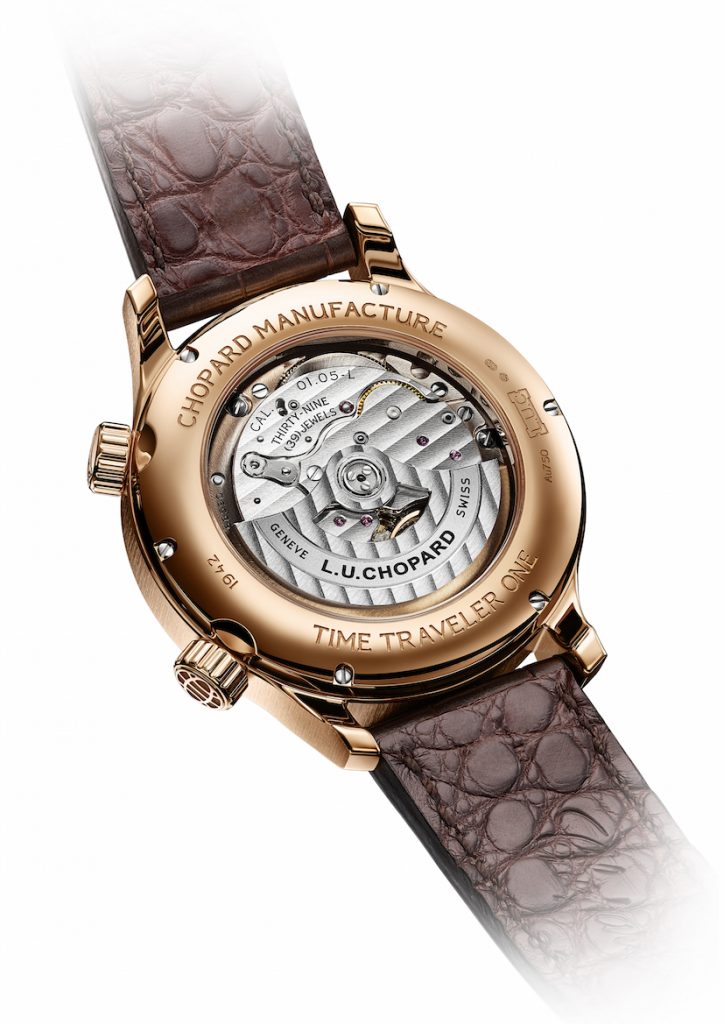 A transparent sapphire caseback allows for viewing of the new movement.

On a more accessible level, Chopard also unveils the L.U.C GMT One. Also equipped with a new movement, the L.U.C 01.10-L caliber, this watch is the first to feature a dual time function built into the movement instead of added as a module. The new 291-part automatic movement is endowed with 60 hours of power reserve and is finely finished, with its signature looks – chamfered bridges, Cotes de Genève and other patterns — visible via a transparent sapphire caseback. 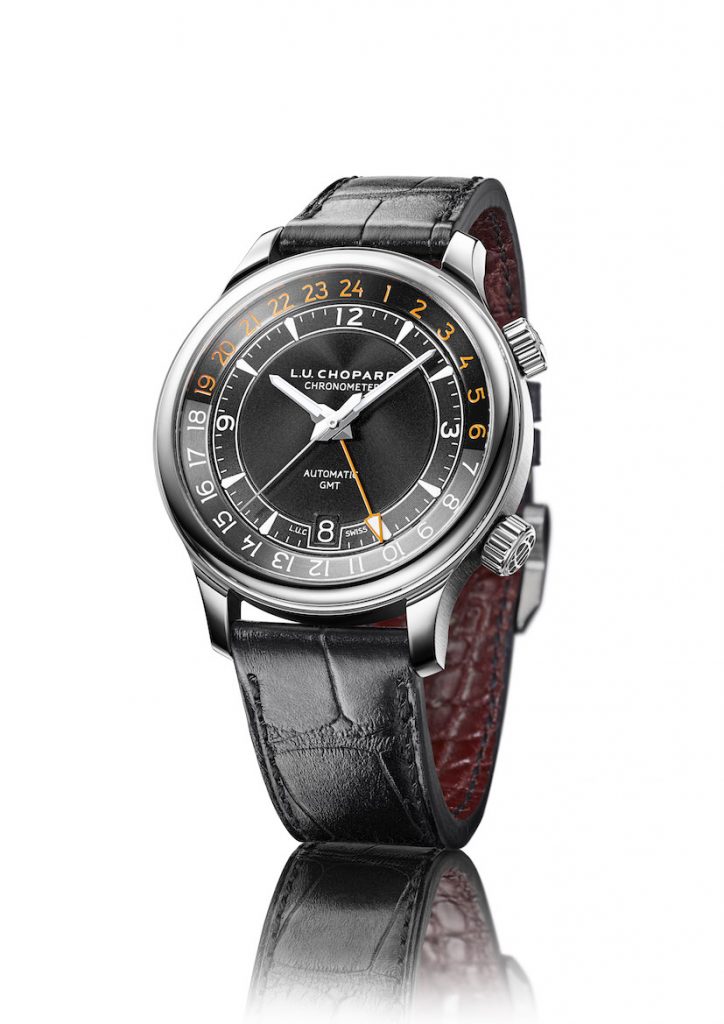 Again, COSC-certified, the   L.U.C GMT is offered in a stainless steel version with a sunburst black dial rimmed with slate gray to display the 24 hours of the day. The white numerals depict daytime, while the orange numerals indicate the night hours. The 42mm watch is easy to use, with a crown at 2:00 to adjust date and local time, and a crown at 4:00 to adjust the second time zone. It is water resistant to 50 meters and retails for $9,500. There is also an 18-karat rose gold version being released. 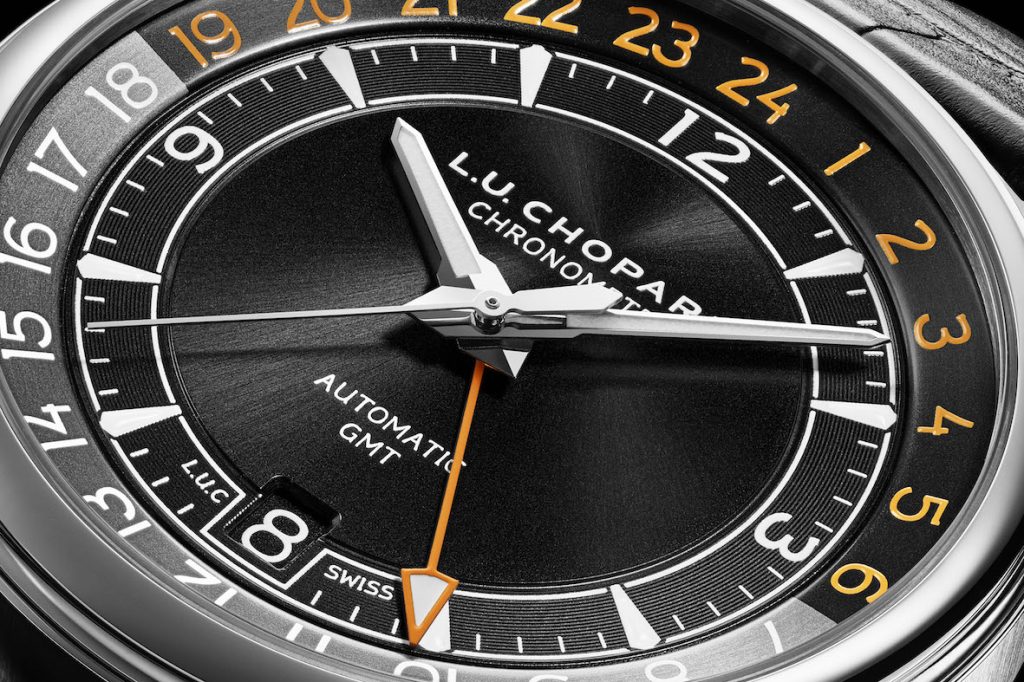 The Chopard L.U.C GMT One is powered by the Caliber L.U.C 01.10-L and offers GMT indication.

Both of these models underscore all of the goals set forth by Chopard Co-President Karl-Friedrich Scheufele, when the Manufacture was opened. To create sophisticated watches that pay homage to the company founder, Louis-Ulysse Chopard – hence L.U.C, and that offer the greatest chronometric precision. 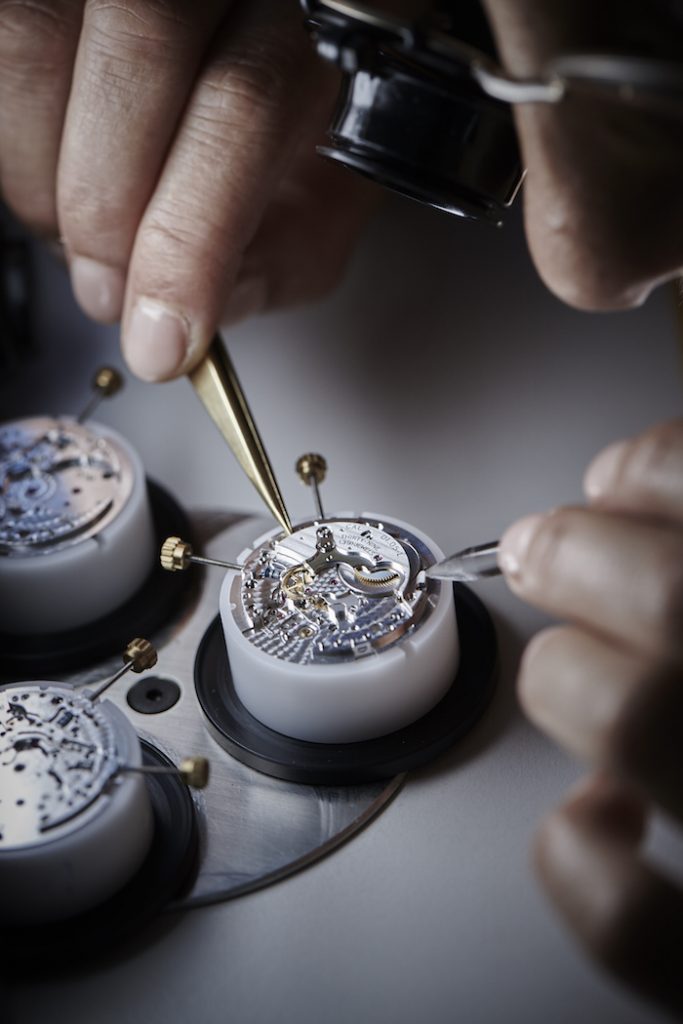 Chopard Fleurier, the making of the new L.U.C Time Traveler One

Achieving 20 years of success thus far was a long, challenging and exciting journey for the brand. In order to be a true Manufacture, the brand had to have its own in-house-made movements. This was the first challenge to be undertaken once the new Manufacture was built in 1996. Of course the decision to build a manufacture had been made several years earlier and from 1993 onwards was under the direction of Karl-Friedrich Scheufele.

With the factory opening, and after much research and development, the plan was made for the first Chopard in-house movement. It was to be a self-winding piece with micro rotor to show off the intricacies of the movement and to enable and ultra-thin mechanism.

“Since the founding of Chopard Manufacture in 1996, our Haute Horlogerie L.U.C collection has set itself the objective of offering unique solutions, whether in terms of R&D or design,” says Scheufele. “The decision taken in 1993 to opt for a self-winding micro-rotor movement is entirely in line with this wish. The fact of coupling the oscillating weight with two stacked barrels represented a complex technical solution that also expresses our passion for horological complications.” 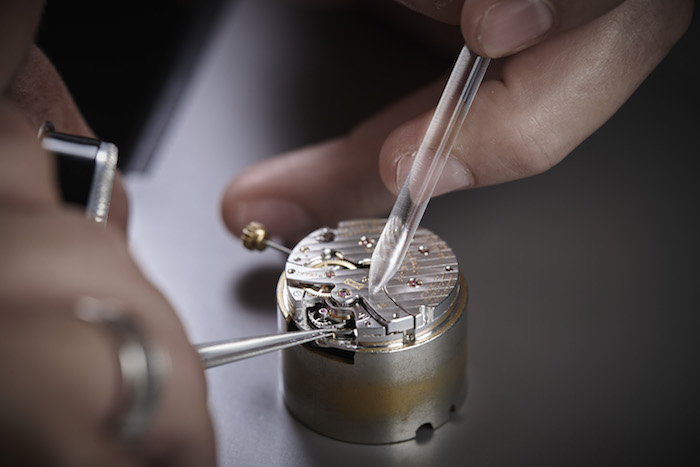 Watchmaking at the Chopard L.U.C Manufacture in Fleurier

The watchmakers at Fleurier spend yeas in the research and development stages and by the end of 1995, Chopard was nearing its goal: the precision of the movement met chronometer-worthy standards; the micro-rotor stretched two springs acting in parallel in both rotation directions, and two stacked barrels guaranteed a 70-hour power reserve. That first self-winding movement, L.U.C 1.96 (and subsequently renamed L.U.C 96.01 L) confirmed the brand’s status as a Manufacture.

Since then, the brand has ensured that all of its components for L.U.C movements are made in house and manually decorated according to the highest of horological standards. Additionally, every L.U. C movement, as mentioned before, is of chronometer status and COSC certified. Adding to these already high standards, the brand adopted the Fleurier Quality Foundation certification, which came out in 2004, that not only implies COSC standards, but also stales that the movement must undergo four other control tests, including demonstrating that it is 100 per cent Swiss origin. Today, Chopard has submitted the largest number of timepieces to the Foundation: more than a thousand watches that represent eight different models.

In the 20 years since its opening, L.U.C has since created nearly a dozen extraordinary base movements along with 87 variations. Several pieces were ground breaking calibers, including the L.U.C 98.01-L “Quattro” calibre (presented in the year 2000) in the L.U.C Quattro watch. Four energy-storing barrels and a total 1.88 meters of springs endow this 205-part hand-wound movement with a sensational autonomy of nine days. The Poinçon de Genève quality hallmark and the COSC certification jointly testify to the quality of the movement and the exceptional work performed by the Chopard watchmakers. 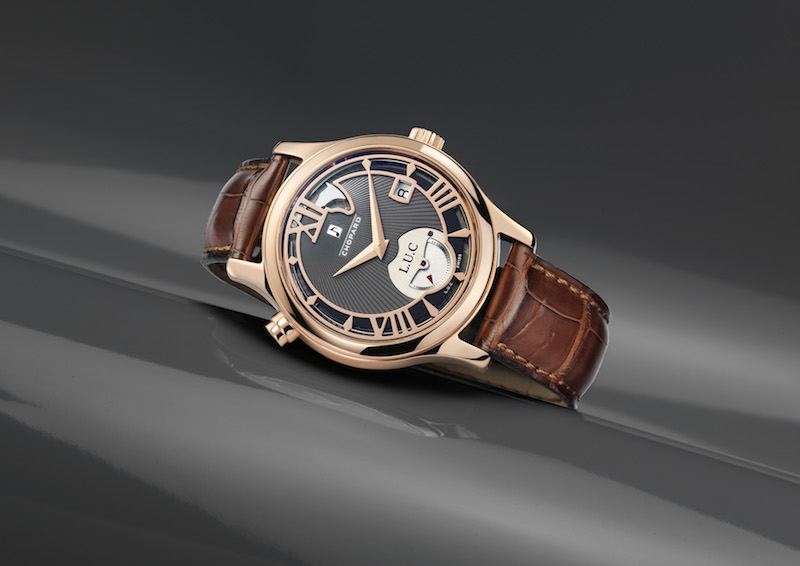 The Chopard L.U.C Strike One in pink gold

Other calibers of significance include the 2003 first tourbillon, L.U.C Calibre 02.01-L, and the L.U.C Calibre 96.13-L introduced in 2005 with perpetual calendar requiring no manual correction until 2100, and with “orbital moon-phase indicator” with just 24-hour discrepancy from astronomic reality every 122 years and 45 or 46 days. A few yeas later the brand released it striking mechanism, the 300-part L.U.C Calibre 96.14-L of the L.U.C Strike One that independently chimes the number of hours on a gong with a crystal-clear chime. 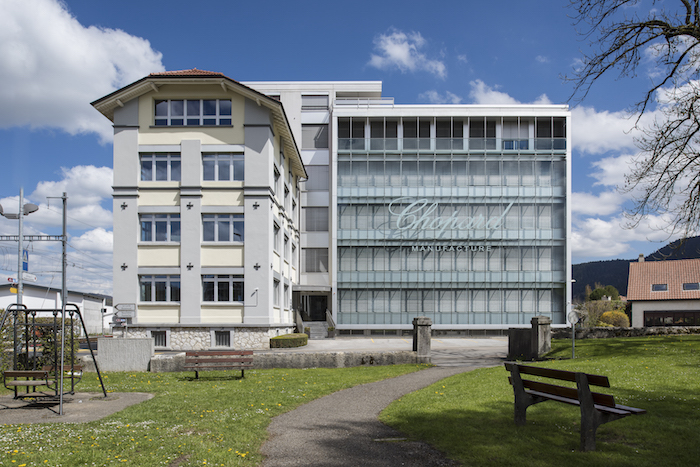 This year Chopard celebrates 20 years of the L.U.C Manufacture in Fleurier