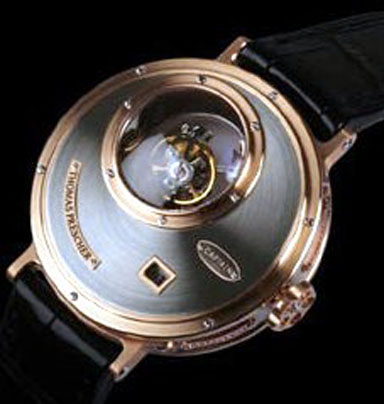 We’ve written about this ingenious independent watchmaker several times before. Thomas Prescher is a man who follows his own drum beat.  Inspired by Jules Verne’s 10,000 Leagues Under the Sea, Thomas Prescher began working on a series of Nemo timepieces. The second one now emerges – using his Triple Axis Tourbillon as a base, but adding a new jumping hour indication. The Nemo Captain watch offers seaworthy design elements, including a porthole look for the bezel, nameplates and index rings inspired by steam punk designs. Thomas Prescher makes handmade watches to the very highest standards. He offers modifications to client’s wishes for all his models and many existing customers revel in the fact that even their most lavish wishes can be fulfilled. Hence, while this watch is being produced in a limited number of five pieces, each may very well be unique as Prescher works with individual customers to complete each one to their satisfaction. The Nemo Captain as seen here – in 18-karat rose gold and palladium — retails for about $408, 000.