Join Our Underwater Adventure With Oris and the Coral Restoration Foundation 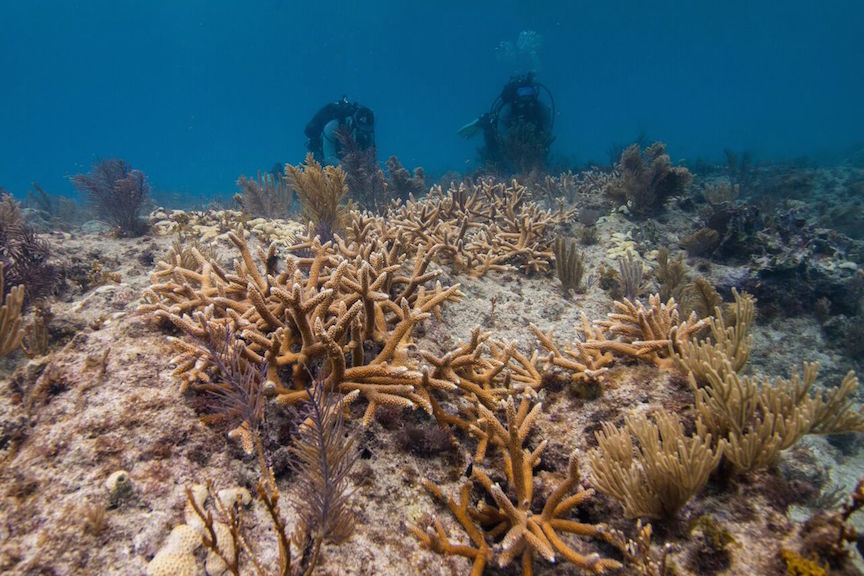 Staghorn coral on the coral reefs in the Florida Keys.

I don’t scuba dive. Truth be told, I’m a little terrified of open water. I love the beaches, love going into the ocean from the shore line — but just don’t put me out in the deep blue sea all alone and don’t expect me to don the diving apparatus and breathe through masks and tanks. However, I am great with snorkeling — and that is exactly what I did several times in Key Largo as I swam above the water staring down at the incredible divers below me working their magic as they harvested nine-month-old coral and replanted it on Pickles Reef in one of the most hands-on, unique conservation efforts on the globe. All thanks to Oris and the Coral Restoration Foundation (CRF).

Here, we bring you along on one of the most fascinating underwater adventures we have been on. It all begins with a small but great group of people. In fact, just about a dozen hand-picked watch writers joined Oris, who partnered with the Coral Restoration Foundation, to visit the organization’s headquarters in Key Largo and garner a better understanding of what the organization does and how it works. We will bring you details of that as you read on. Upon arrival in Key Largo, our group — we had several certified divers who were going hands on in the next day’s dive – visited the Coral Restoration Foundation for a thorough training about their efforts and about our next day’s adventures. 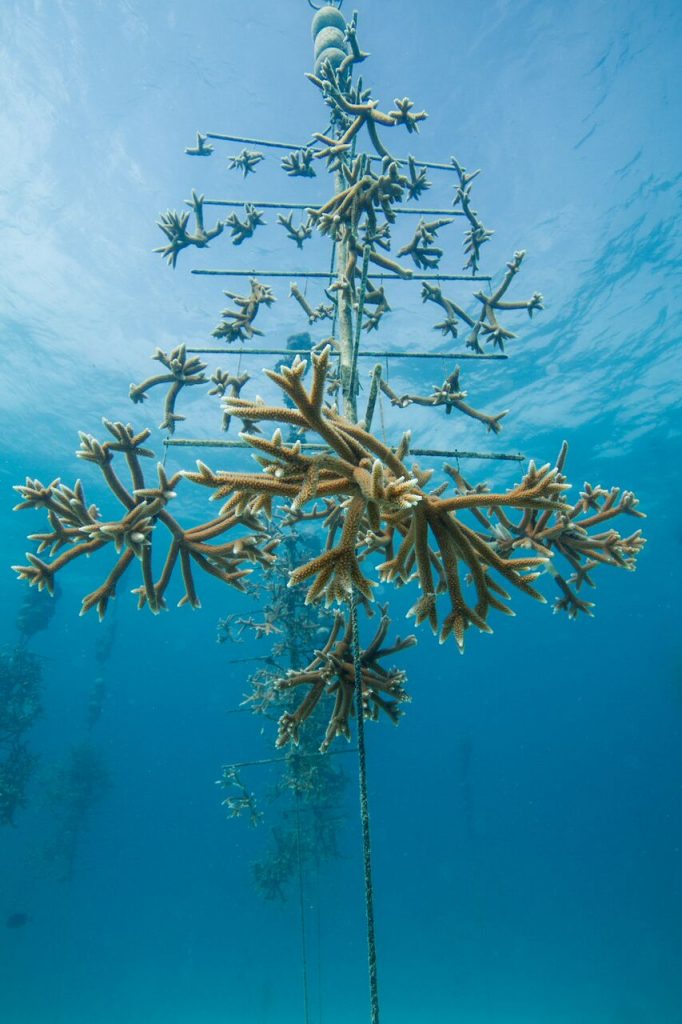 The underwater “trees’ in the nurseries of the Coral Restoration Foundation — here the small pieces of coral are tagged and nurtured for nine months at a time.

CRF harvests strong pieces of local coral, and relocates it to the organization’s underwater  Nurseries. There, attached to man-made PVC “trees” in 20-foot deep waters, the coral grows. For nine months – just like a baby in the womb – the tiny piece of coral gets the proper care. Nurtured daily, the CRF crew regularly dives to the “trees” and cleans the coral of algae and fire coral, among other things, so that it can thrive. Over the entire nine months, the coral grows from a finger-length piece to a small basketball-sized piece that is ready to be replanted on the coral reefs. This was our mission for the next day: to visit the CRF Coral Tree Nursery®, and retrieve “reef ready” coral and take it to Pickles Reef to out plant it in the hopes of future growth. 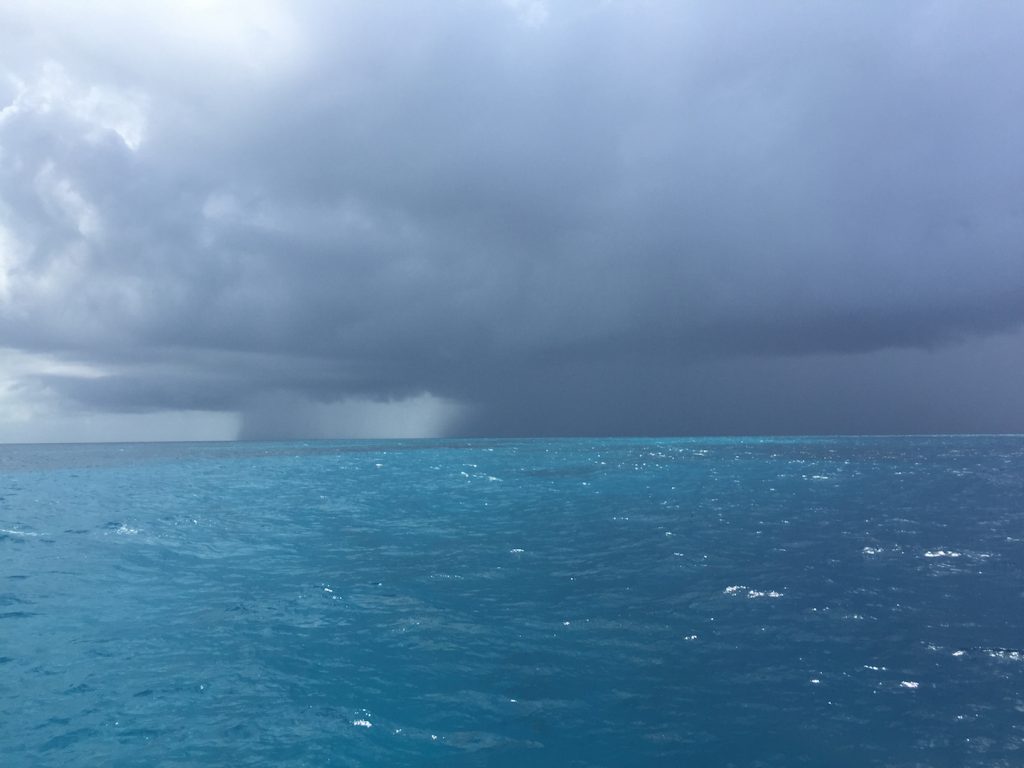 The ominous clouds and the thunder and rainstorms were moving closer to us as we went on our Oris/CRF adventure in Key Largo.

The next day, we arose early, donned our snorkel and diving gear, and set sail with CRF and Oris out into the ocean. The seas were a bit rough and there were thunderstorms around us. In fact, at least once during the 45 minute ride, those of us on the front of the boat got fairly well soaked thanks to a few nice rainstorms. Finally we reached the nurseries – out in open water – where specially made “trees” of PVC piping that was strong enough and resilient enough to withstand the tides and storms stood as refuge centers for the growing coral that had been harvested previously by CRF.

Divers, including four or five watch writers who were also certified divers, donned their gear and went down to harvest the larger coral pieces that would soon be replanted on the coral reef. The rest of us jumped overboard to snorkel and watch from above. The currents were strong and from the side of the boat, I immediately found myself 20 feet behind the boat along with others. Thankfully, there was a rope tied to a buoy that ran from the boat, so several of us grabbed that and managed our way back to the boat ladder against the current and the waves that were about us. 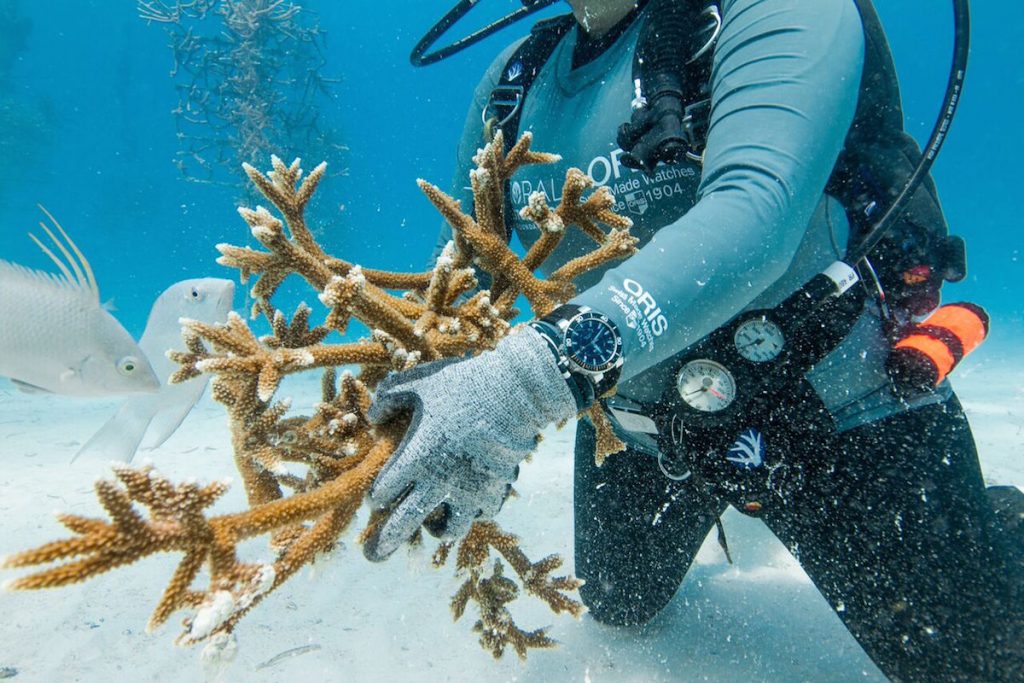 Diving with Oris and the Coral Restoration Foundation in Key Largo to out plant Staghorn coral.

After about 20 minutes or so, as we snorkelers got back on board, the divers began surfacing. One, a woman from the CRF, had a full crate of beautiful Staghorn coral – the focus of our out planting. The coral was transferred to a bin filled with ocean water and we started making our way toward Pickles Reef for the drivers to once again submerge and make a place for the coral on the reef.

Again thunderstorms greeted us, and rough seas unfortunately made several people too sick to even be able to snorkel above the reef. Thankfully I was not one of them. When we arrived at the reef, the divers made their way down with the coral to the reef. Attached to their dive gear were tiny tools, including a hammer to break away the algae on the reef to be able to plant the coral, and epoxy that they would mix underwater to actually glue three points of contact from the Staghorn coral to the reef. Once the divers were down, we snorkelers jumped overboard and hung out in the water 15 feet above the reef to watch them do their work. 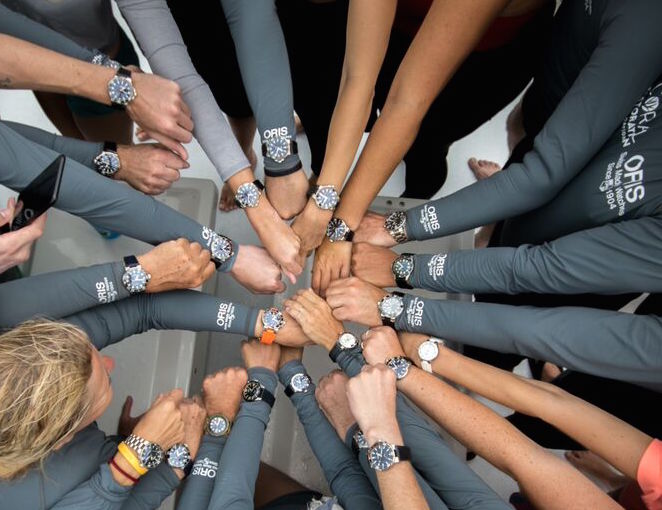 It was all hands in — complete with Oris watches — on deck.

As they freed the reef of algae and other debris, those bits floated in the water around us, but there was still great visibility to watch them perform this great hands-on restoration work. At last: Mission accomplished. We all climbed aboard the boat again, exhausted but exhilarated, excited and enthusiastic that we somehow had a hand in this great conservation effort. 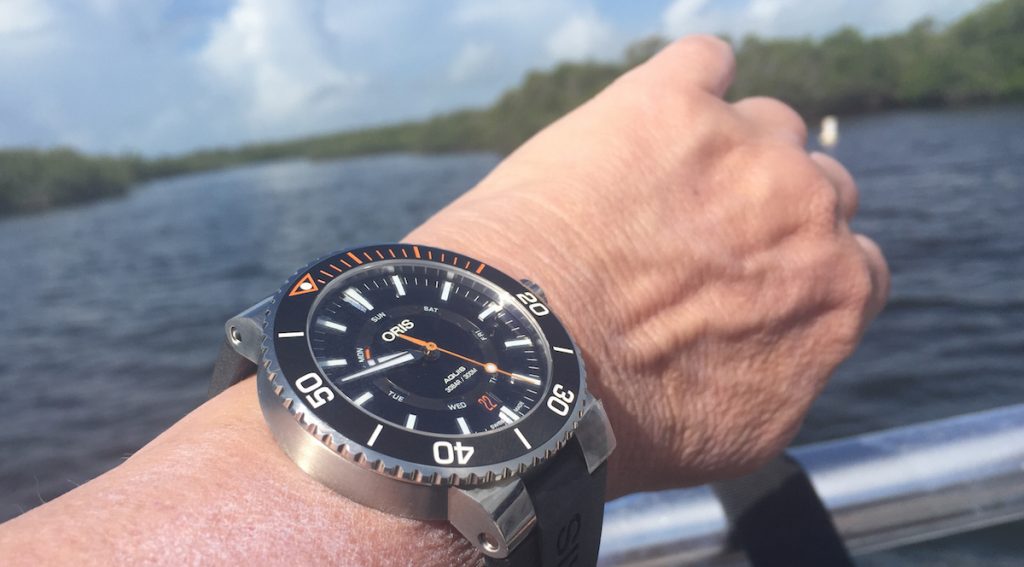 Throughout the mission, we all wore Oris watches, especially the new Oris Staghorn Restoration Limited Edition dive watch that will help benefit the cause. You can read a lot more about that watch here. The watches will be in stores this summer, but only 2,000 are being made, with a portion of the proceeds of the sale going to CRF. Xrafted in steel, the Oris Staghorn Restoration Limited Edition watch features an ocean-blue/black dial with bold coral-colored accents. Powered by an automatic movement, the  43.5mm diver’s watch is water resistant to 300 meters. The caseback is engraved with a Staghorn coral image, and the presentation box is made using regenerative algae. The watches, part of the brand’s Aquis collection, retail for $2,200 on strap and $2,400 on a steel bracelet. 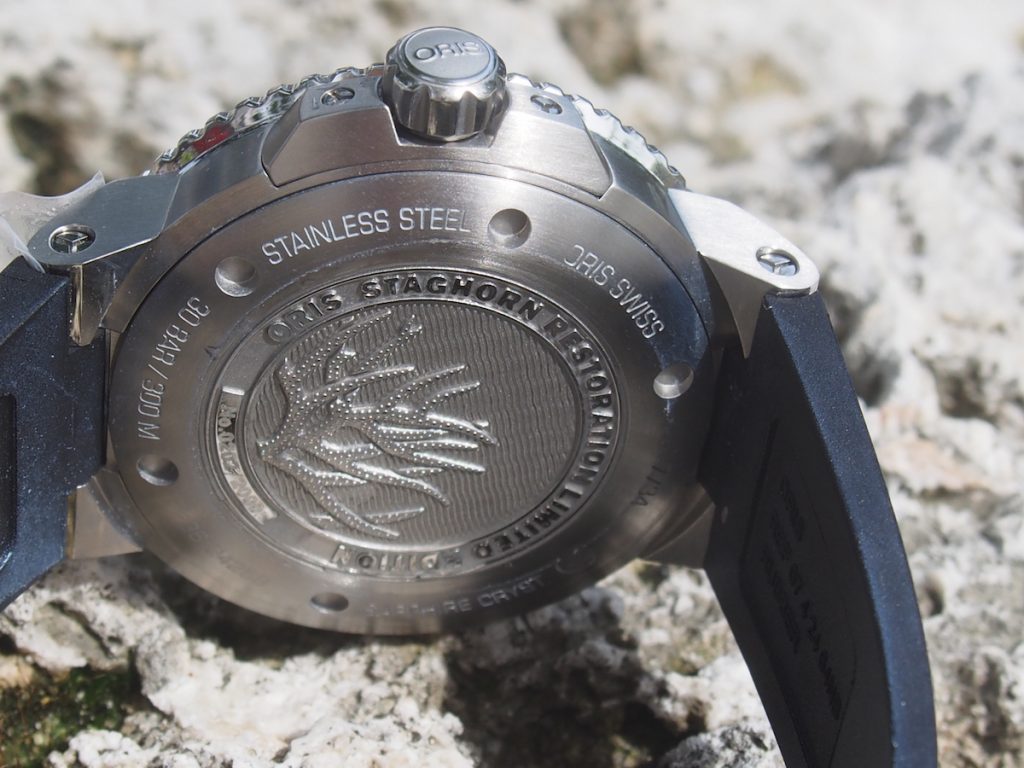 The caseback is engraved with an image of the Staghorn coral.

CRF founder Ken Nedimyer said he initially began working in Key Largo fishing for tiny salt-water fish for aquariums in large corporations and businesses. He had the idea to grow coral and sell that, as well. However, he said, when he saw the condition of the reefs, he knew that while money was the initial driving force, he preferred to set up the nonprofit organization and try to save the coral reefs. He has never sold a single piece of the coral. It was 10 years ago that the CRF began restoring reefs in the Florida Keys. 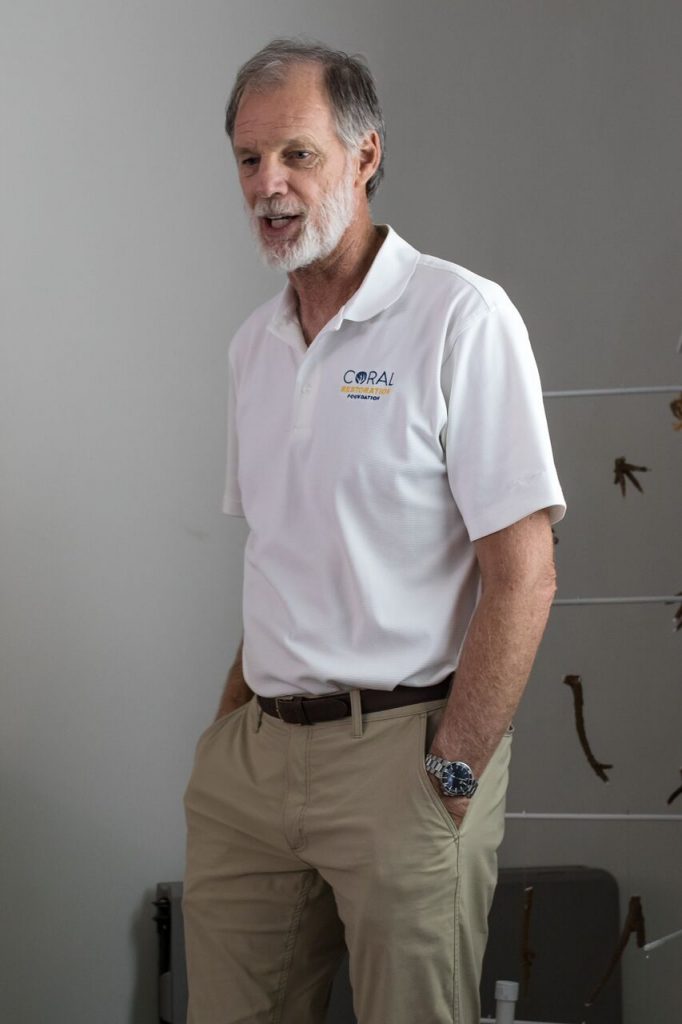 Today the organization has grown by leaps and bounds. It currently works with NOAA and has established nurseries in other parts of the world for those regions to work to harvest healthy coral grow it and replant it much like we do our forests. In Key Largo, CRF predominantly works with Staghorn and Elkhorn coral. The organization depends on divers and volunteers to help with the out planting, wherever possible.

“The ocean and the coral reefs, which take up less than one percent of the entire ocean floor, are hope to great marine life, but for the past decades, thanks to bleaching, global warming and human or natural stressors, much of the coral reefs are declining,” says Nedimyer.  “While the numbers are devastating, we don’t hear enough about the hope of saving the coral. That is what we are about. We are growing coral in offshore nurseries and replanting it on the reefs, giving it a chance to come back and heal itself. We are buying time so that even though some of the coral will die, we hope most will live and there will still be coral reefs in 50 years.” 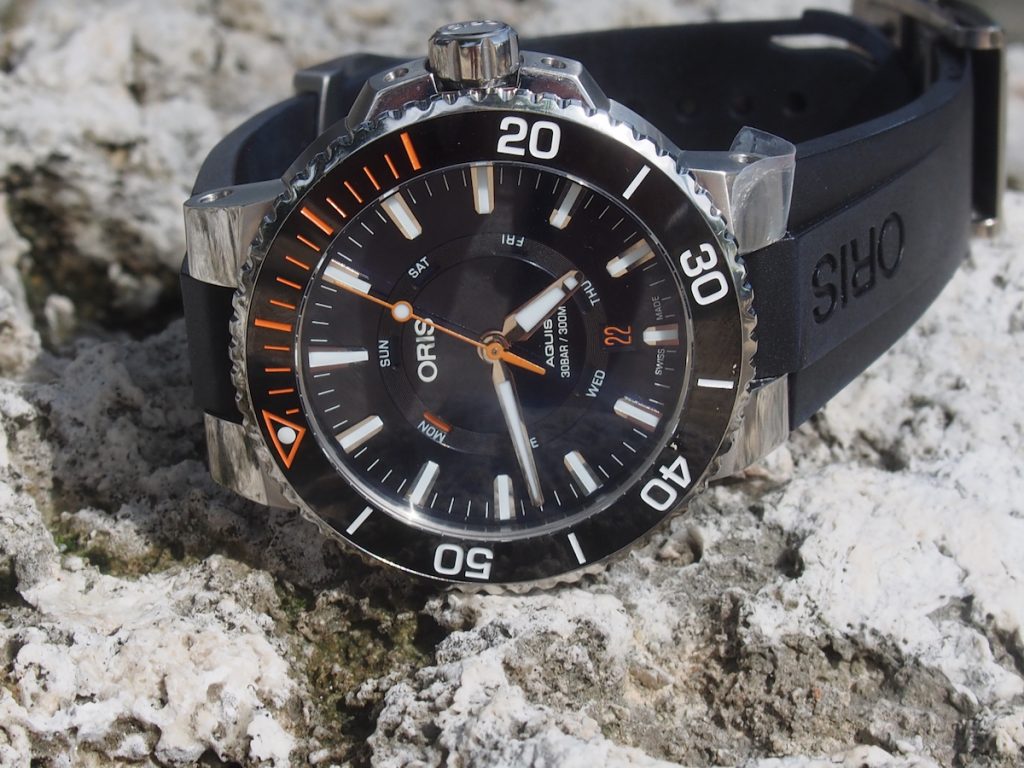 The Oris Staghorn Restoration Limited Edition dive watch is made in a series of just 2,000 pieces. (Photo: R. Naas)

Oris Commitment to the Oceans

According to Ulrich W. Herzog, Chairman of Oris, the brand has long been involved in the world of diving, having built its first dive watches in the mid 1900’s. In fact, the brand continues to support conservation efforts revolving around the world’s oceans. Since 2010, Oris has made special edition watches dedicated to various ocean conservation projects.

Additionally, for more than half a decade now Oris has partnered with Scuba Diving Magazine to support the Sea Heroes program, recognizing individual who make a contribution to ocean conservation. One of the 2014 Sea Heroes Nedimyer, and a strong relationship grew. V.J .Geronimo, CEO of Oris North America, solidified the involvement with CRF, which led to the making of the Staghorn restoration watch, and the brand’s commitment to restore the future of our coral reefs by supporting CRF. 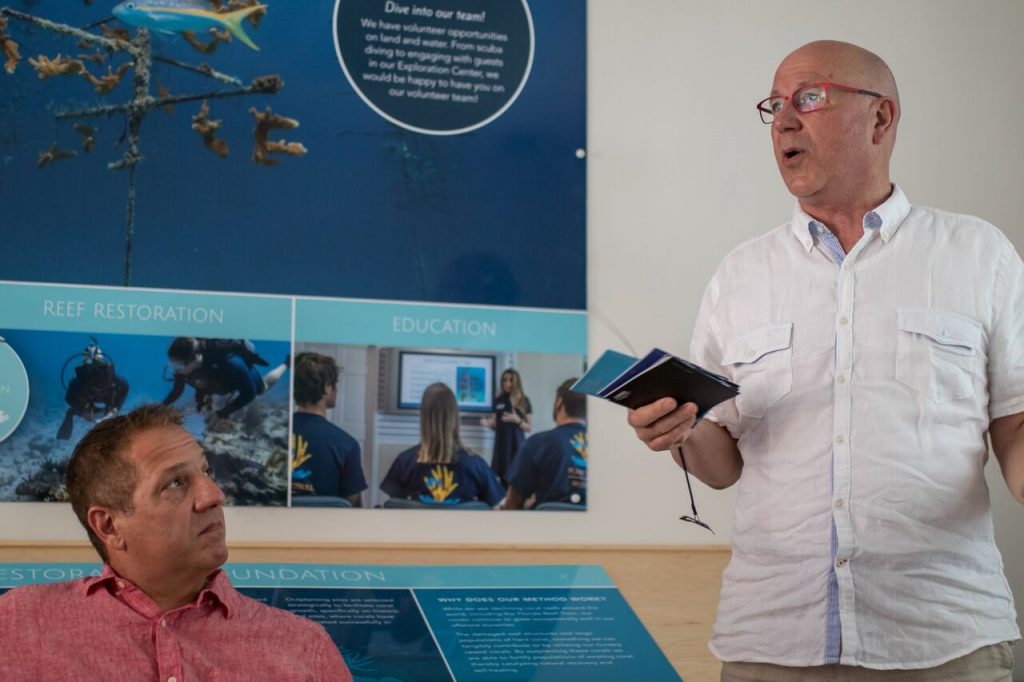