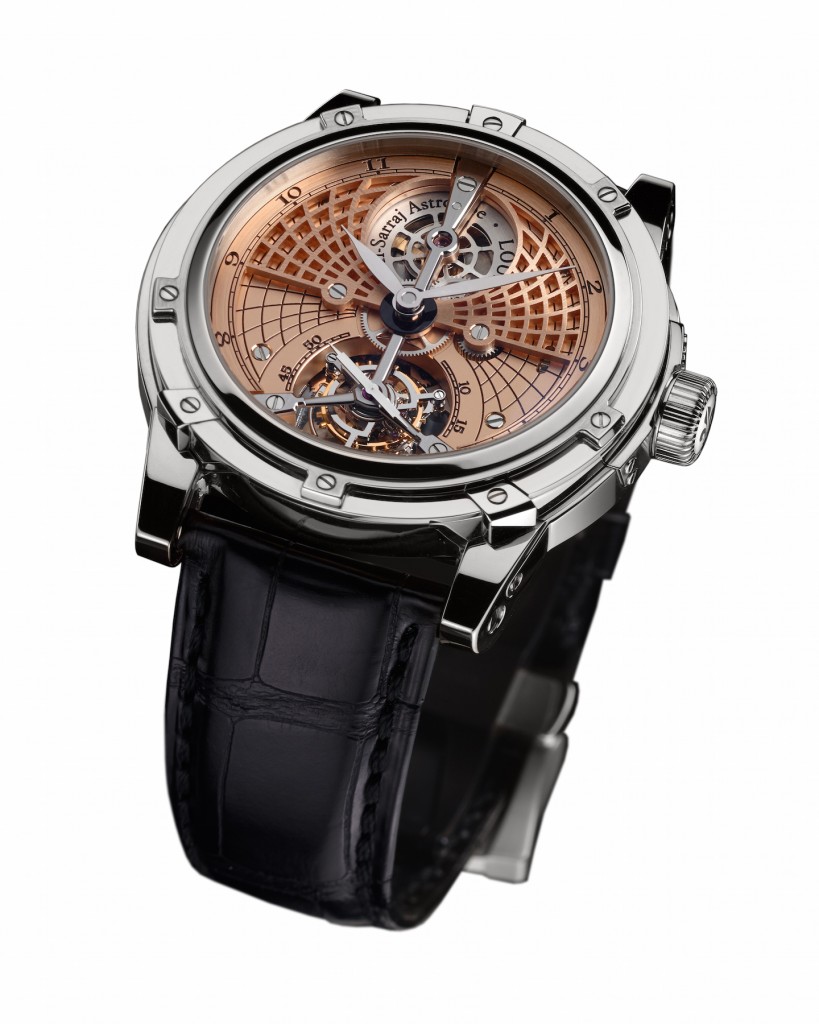 The old adage “Everything old is new again” couldn’t be more to the point than with the latest release from Louis Moinet, the Astrolabe Tourbillon. Invented by the Greek scientist Hipparchus, the word astrolabe comes from the Greek astrolabos, which means “an instrument to measure the height of the stars.” The tool can be used to measure both the movement of the stars and the passage of time in both the day and night. In the day by observing the sun, and at night by the movement of the stars.

To construct an astrolabe, as one would expect, is no small task. It is made up of a disk graduated in degrees, with a rotating arm attached to the center called an alidade. The alidade pivots on its axis and is directed towards the sun or a star to read on the disk’s markers the angle representing the height of the sun or a major known star in relation to the horizon. To use the instrument, it must be held vertically in hand by a ring and when done so, the stars are sighted through a viewfinder until one of them can be seen through both ends. The measurement of degrees in the arc of the viewfinder determine the degrees of latitude. Time is measure by taking the height of the star. Finding a functional astrolabe is difficult and only a few museums have examples in their collection.

When the CEO of Louis Moinet, Jean-Marie Schaller, sought to find a functioning example to serve as the basis for the new Astrolabe Tourbillon watch, he was lead to Martin Brunold, one of the top (perhaps even the only) manufacturer of astrolabes in the world. Martin Brunold has been crafting these works of art and  history by hand for the last 40 years. His medium has been brass and his pieces either reside in museums or in private collections. 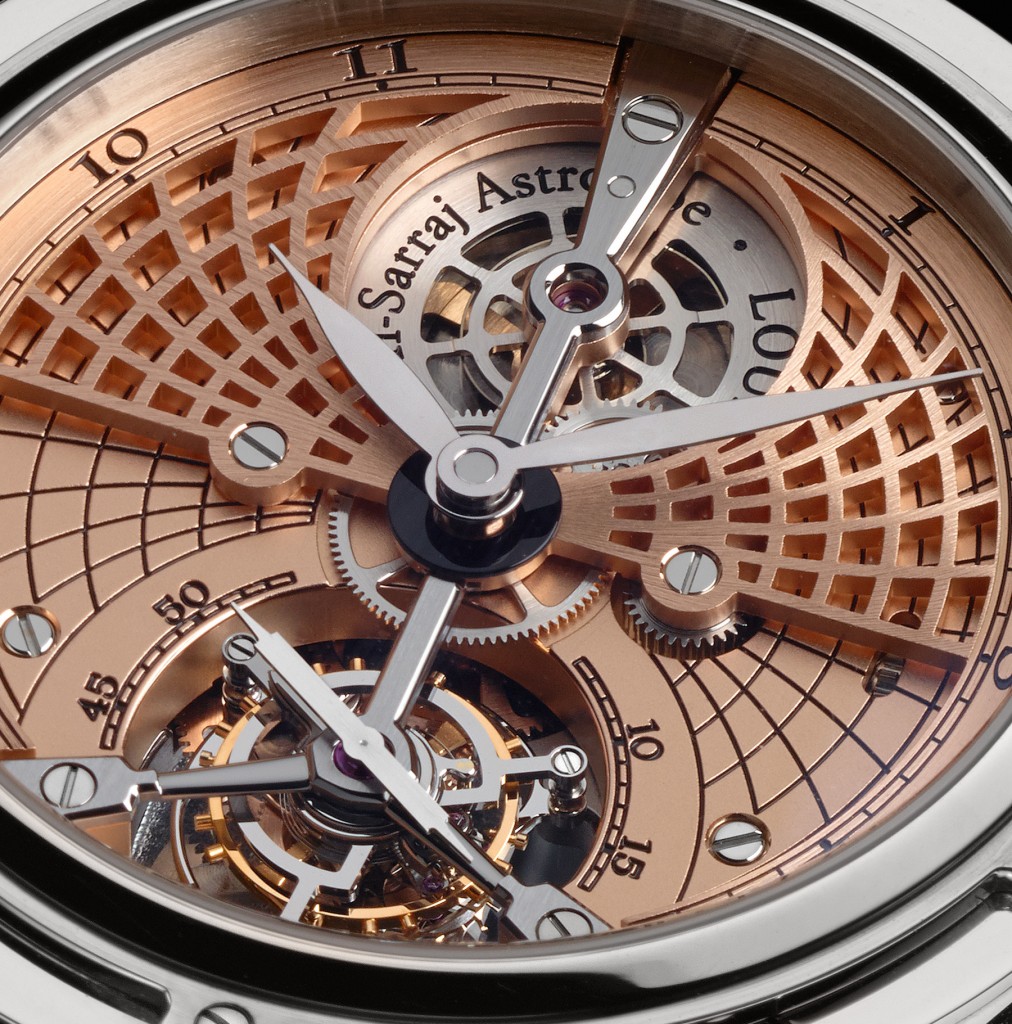 The watch is entirely hand crafted

For the Louis Moinet Astrolabe Tourbillon watch,  the specific astrolabe of inspiration is a recreation of the Al Sarraj astrolabe. Martin Brunold has worked with Louis Moinet to recreate 12 Al Sarraj astrolabes with are exact replicas of the original. The original was designed by Ahmad Ibn Al-Sarraj in the 14th century and was considered the most advanced development of the Islamic world. In fact David A. King, historian of Islamic instrumentation, describes the universal astrolobe designed by Ibn al-Sarraj in the early 14th-century as “the most sophisticated astronomical instrument from the entire Medieval and Renaissance periods.”

The watch comes as a boxed set that includes Martin Brunold’s Al Sarraj astrolabe and the manually wound watch,  which houses a 60 second tourbillon that boasts the design of an astrolabe. The case of the hand-assembled timepiece is finished in 18K white gold composed of 59 different components and features the signature Louis Moinet signature crown guard. The crown guard is a piece of innovation in and of itself. It consists of an independent stem integrated within a watertight system and held with a plate secured by four screws. The end result allows for better servicing on the part of the manufacturer.

The transparent case back shows more of the incredible movement, including its ‘octopus spring’ for the winding and setting mechanism. The component is essentially three springs in one, the pull out piece spring, the lever spring and the click spring which all radiate out from the center like the arms of an octopus. The movement is engraved with Louis Moinet’s Côtes du Jura motif. As stated earlier the watch is being built in a limited edition — just 12 pieces will be made, each retailing for $230,000. This  represents a true opportunity to own a piece of history, science and hand-crafted art. A triple treat if there ever was one. 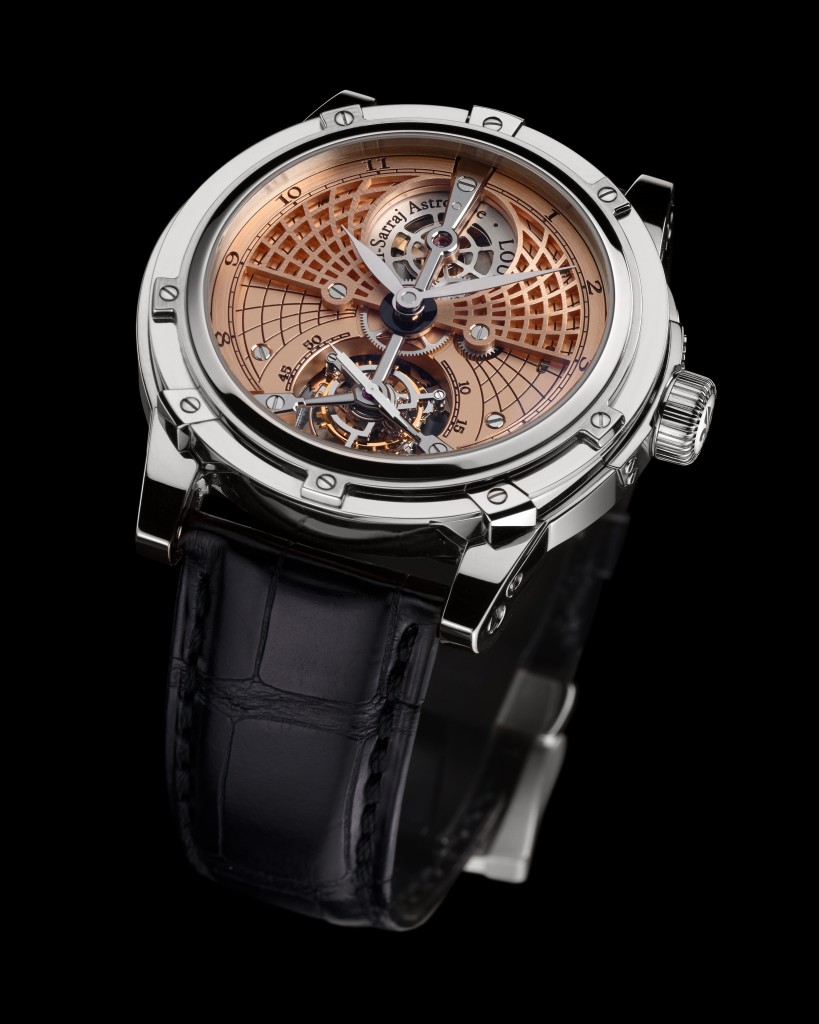 The watch offers central hours and minutes, as well as tourbillon escapement

Dial: Design is inspired by one of the world’s oldest astronomical instrument: the astrolabe