Luxury Watches or Games? Vegas on the Wrist 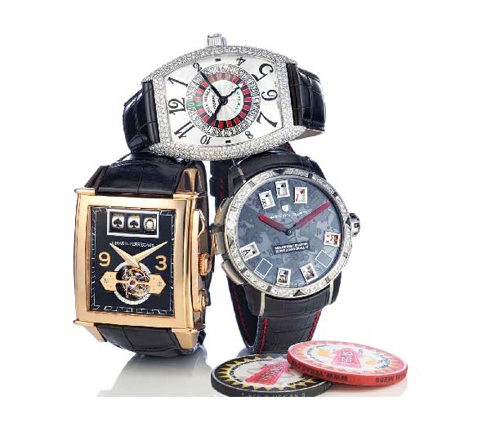 Timepieces that reflect the excitement and allure of high-stakes gaming are wonderfully fun – if you’ve got the money. They offer a great distraction when you just don’t have time to go to the casinos.  Indeed, a handful of truly gifted watchmakers shake up accepted traditions and elevating the timepiece to a new dimension: a game piece.

Christophe Claret, Girard-Perregaux and Franck Muller have spent years in the research and development phases to create complex watches that are also elaborate games for the wrist. They are precision watches on which one can actually try their chances to win at roulette, dice, slots and even black jack.

In 2011 that Christophe Claret unveiled his revolutionary new 21 Blackjack watch to the world.  The complex 21Blackjack enables the wearer to interact with the watch  in a game that replicates the multiple-move, multi-player card game.  In fact, this horological masterpiece offers three casino games: black jack – with striking mechanism; roulette; dice.  This was the first in a trilogy. Last year, Claret unveiled Baccara, and the third may be out next year.

More than a decade before this, Franck Muller unveiled his casino-inspired Vegas watch (in 1999). The Vegas watch –still sold today — features the hours and minutes on its dial, but the watch back is the delight: it features a colorful roulette wheel. That mechanism was months in the research and development stages, and was finally made possible by the patented invention of an additional module added to the movement to make room for the gambling function.  To play roulette, the wearer activates a slide on the winding crown that releases a center pointer hand that then spins very quickly until it is stopped, at which point the hand lands randomly on one of the numbers on the wheel. 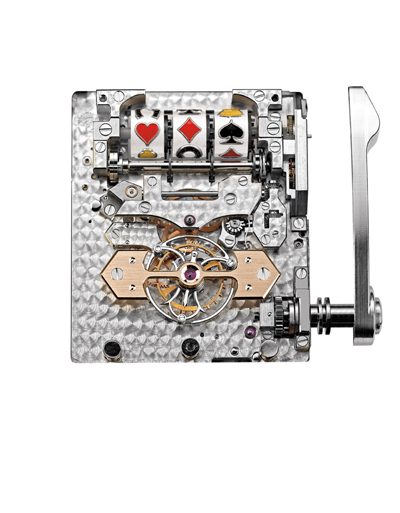 The slot mechanism in the Girard-Perregaux Jackpot Tourbillon

In 2007 that Girard-Perregaux went a few steps further in the gaming world, unveiling its first-ever Vintage 1945 Jackpot Tourbillon – with the slot machine game on the dial side of the watch. The spin-till-you-win watch was not only fitted with a tourbillon escapement, but also boasts a complete slot machine. The watch was four years in the research and development stages.  These amazing toys for the wrist are sure winners. (Thisis an excerpt from a larger article that recently appeared in Vegas Magazine.)