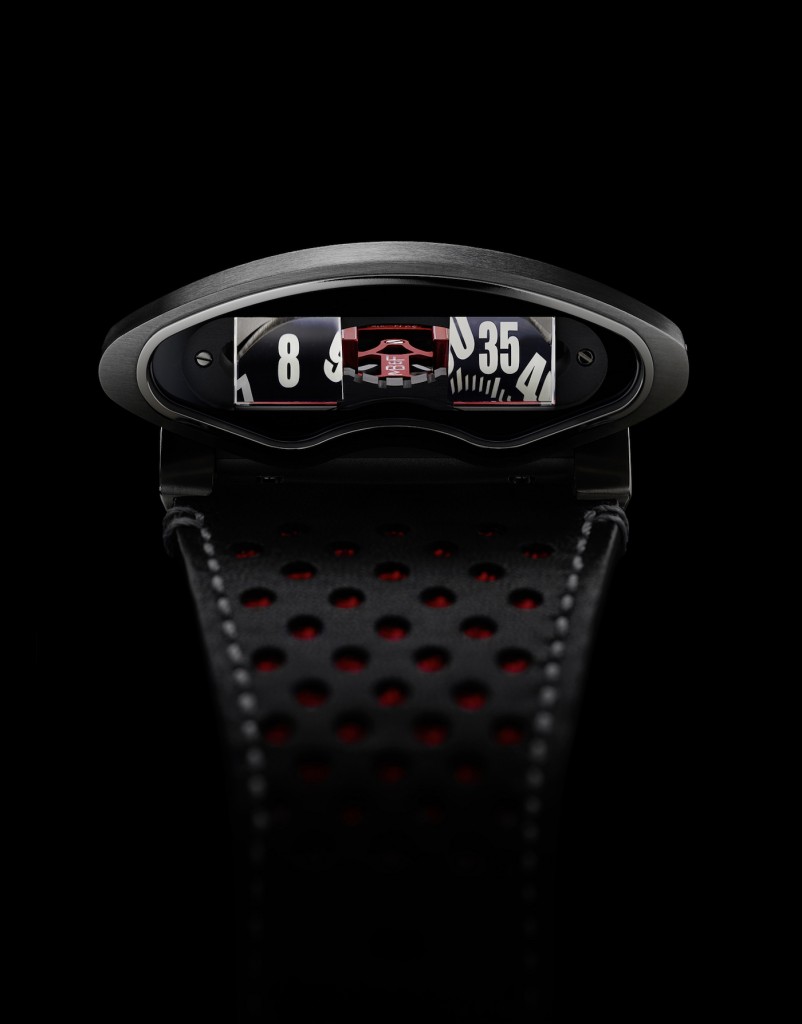 This year, independent watch brand MB&F celebrates its 10th anniversary. Hard to believe that it has already been 10 years – as this brand has regularly set hearts and minds of collectors askew with the most visionary micro-engineering horological machines on the market.

I remember so vividly sitting with Maximilian Busser the year before he launched MB&F (Max Busser and Friends). We were in Geneva and he was showing me a prototype for his first horological machine … it looked fabulous in prototype stages and seemed to be the perfect extension coming from the man who had recently departed Harry Winston – where he had been instrumental in developing the Opus project. Since the launch of his brand, Max has stayed true to his vision and his dreams –building machines inspired by space ships, cars and imagination. 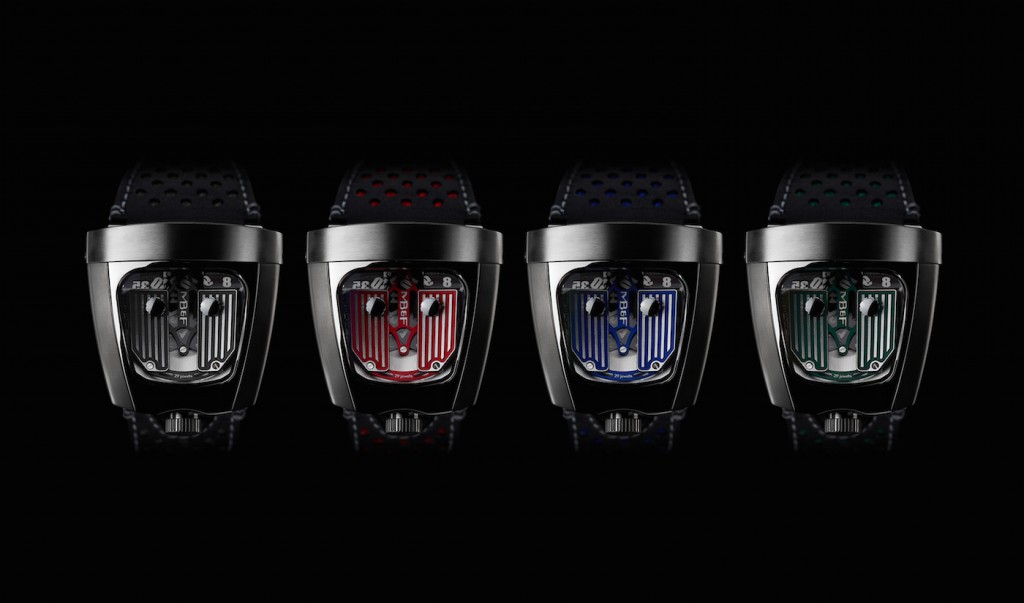 Now, the HMX (Horological Machine 10) not only celebrates the brand’s anniversary, but also is designed as the first “Affordable” watch in an effort to thank collectors who have been decade-long followers. In fact, the watch retails for 29,000 Swiss Francs (or just over $30,000) – a far cry from its siblings that have been priced at double, triple and quadruple-plus higher than that. (The previous entry price was 52,000 Swiss Francs for the LM01.)

Because of the substantially lower price point, the watch was more challenging to create, but – as we in the watch world all know about Max – that didn’t stop him. Embracing the theme “A creative adult is a child who survived,” MB&F makes a simple point – don’t lose the child within you, never stop imagining and creating. 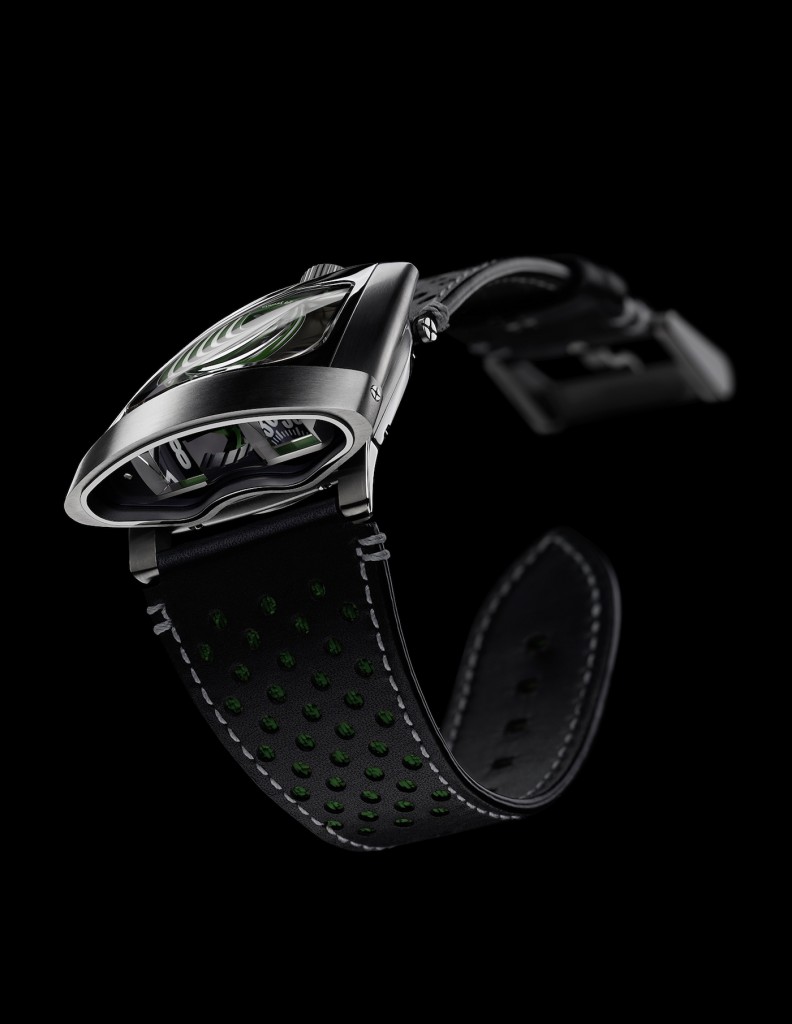 The HMX case is composed of 44 parts

The “driver” style watch, inspired by the supercars of today and the future, features the time indication on the side of the watch – visible to the driver when driving – as opposed to on the typical dial side. Instead, in this watch, the dial is replaced by a total view into the movement – including offering a look at the flat sapphire disks that display the hours and the minutes. The time display – on the oval, eye-shaped, “dial” – is actually a projection of the time indication—achieved via a series of disks and prisms. The watch is an extension of the Horological Machine 5, with similar design but without the optical illusion time display.

The MB&F HMX is powered by an automatic movement that uses jumping hours and trailing minutes disks. Those rotating disks (seen through the sapphire crystal on the top of the watch) feature SuperLuminova-coated mirror-image numerals that are magnified by two sapphire crystal prisms and then reflected at a 90-degree angle to project the time onto the “front” display. The optical engineering feat is made possible by harnessing the light and bending it through the prisms. 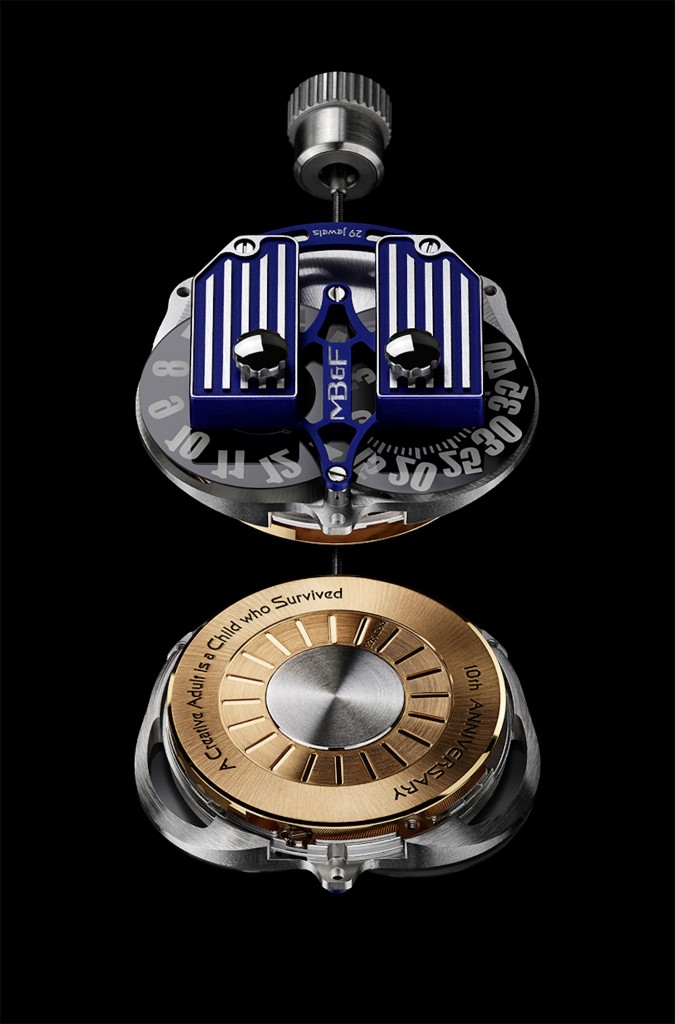 Offering an edgy racecar appeal, the movement is equipped with two “rocker covers” – each with a fully functional oil cap, which the watchmaker can access to oil the jeweled bearings of the disks. Those rocker covers are created in four great colors: Lotus black, British Racing Green, Ferrari red and Bugatti Blue. The caseback features the oversized car-inspired 22-karat gold rotor and the engraving of the theme. The case is titanium and steel. Just 20 pieces of each HMX – in a grade 5 titanium and stainless steel case – will be created. (For more details on the watch design, and to get a little insight from Max, please read our article on Forbes.com here.) 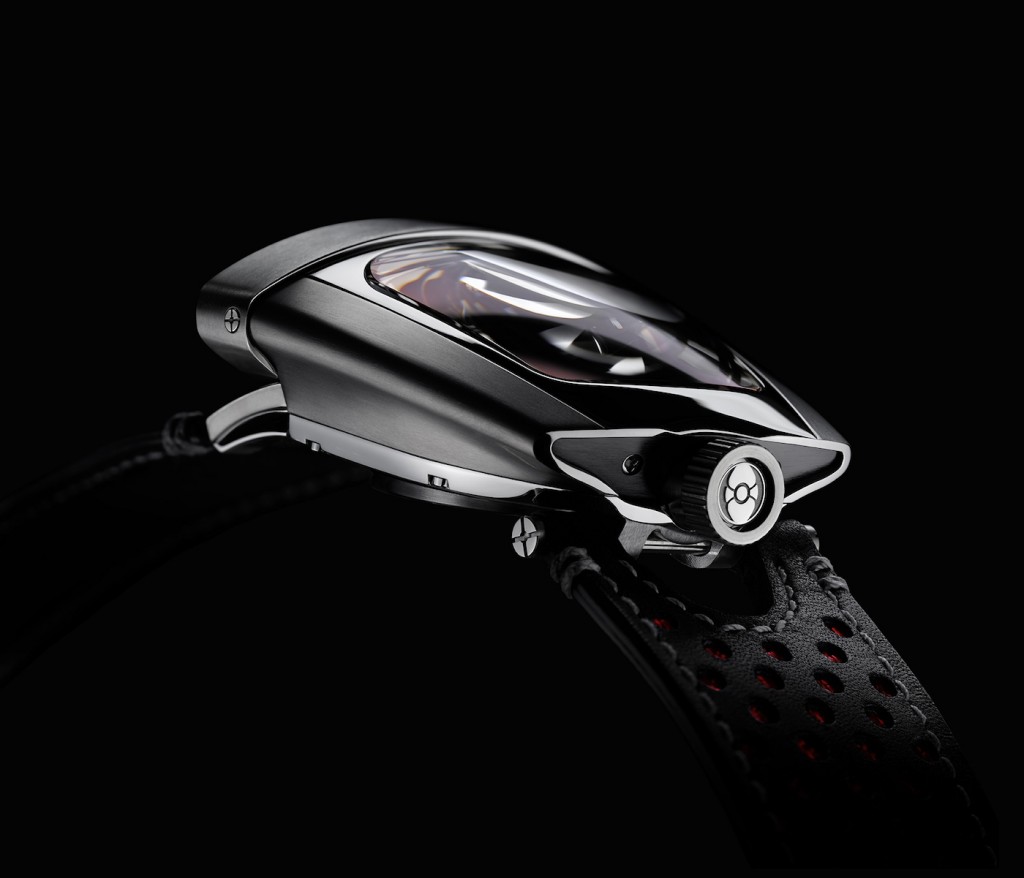