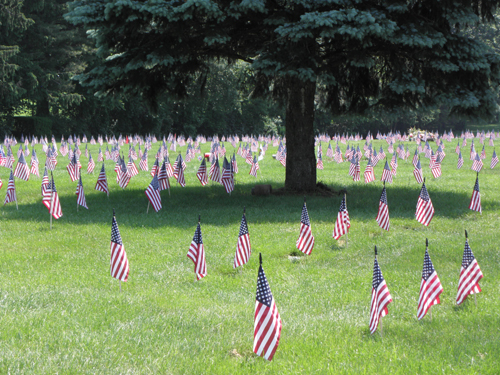 Flags in honor of those who served, (at George Washington Memorial Cemetary, NJ)

Every Memorial Day, when I go to the cemetery to place flags on my father’s grave (he was a Marine in World War II) and on my uncle’s grave (he was in the army during World War II), I am always truly touched by the vast expanse of American Flags waving on the ground – marking the graves of so many brave who served in the armed forces to protect our soil and our freedom. Some veterans even have processionals at the cemetery to honor certain fallen heroes.  Visiting the cemetery always brings tears to my eyes, but on Memorial Day, the deep swell of love and pain, of honor and pride intensifies my feelings. Having had so many family members (including my father –in-law, my almost daughter-in-law, and many friends) who have served in our forces, I am proud to have holidays that honor these men and women. 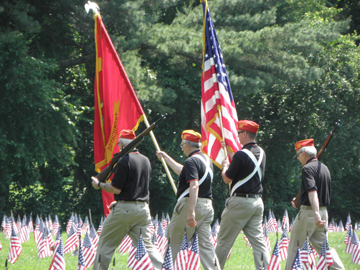 Honoring those who served.

It was in 1868 that Memorial Day was officially proclaimed. Originally, the day was called Decoration Day, and was developed as a day of remembrance in America for those who have died in our nation’s service. It is a day where the American flag runs high – not only in cemeteries, but also on flagpoles around the country and in the homes of those who have served and continue to serve. Bravo and thank you.