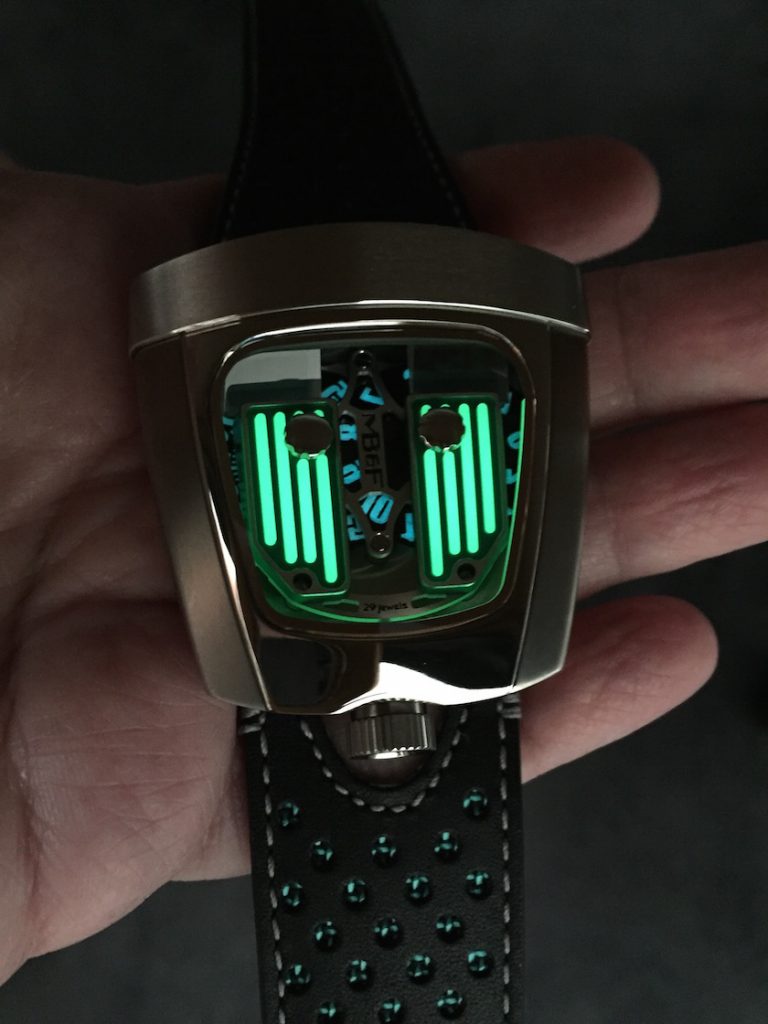 It’s been a busy year of new introductions in the “art” family of MB&F.  Two important collaborations have been made and pieces will be seen in stores soon. The first adventure is one between MB&F and “illuminating” partner, James Thompson, founder of Black Badger Advanced Composites in the form of the HMX Black Badger. The second is with famed designer, Alain Silberstein in the form of the Legacy Machine Number1 Silberstein.

For those who know Max Busser and friends, art machines have been an important part of the brand’s repertoire — and are referred to as the Performance Art Collection.  The new HMX Black Badger “glow in the dark” watches are created in titanium and steel limited-editions and feature either luminous Radar Green, Phantom Blue or Purple Reign colors that light up the engine of the in a space-age glow. The design is achieved via solid blocks of proprietary high-efficiency luminosity capable of storing energy and releasing it for a longer period of time than other luminous materials on the market. The watch is created in a limited edition of 18 pieces of each of the three color ways, and will sell for approximately $50,000. 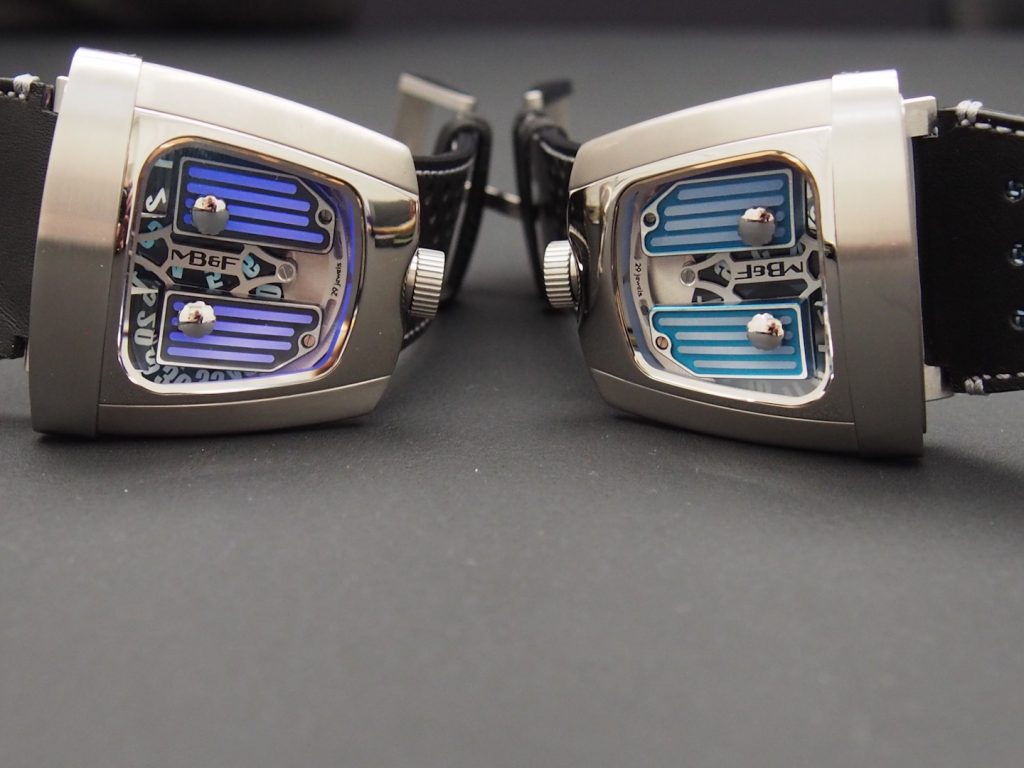 The HMX Black Badger is being offered in purple, green and blue in a limited edition of 18 pieces each. Photo: R. Naas/ATimelyPerspective.com.

Also adding bold color in another Performance Art timepiece, MB&F partners (for the third time) with French designer Alain Silberstein (who started his own brand in 1990 and has also designed a number of watches for other brands)  to unveil the Legacy Machine No. 1. The watch deftly blends Silberstein’s signature geometry and bold colors with the Legacy Machine to create a modern and stealth appeal to an already dynamic watch. 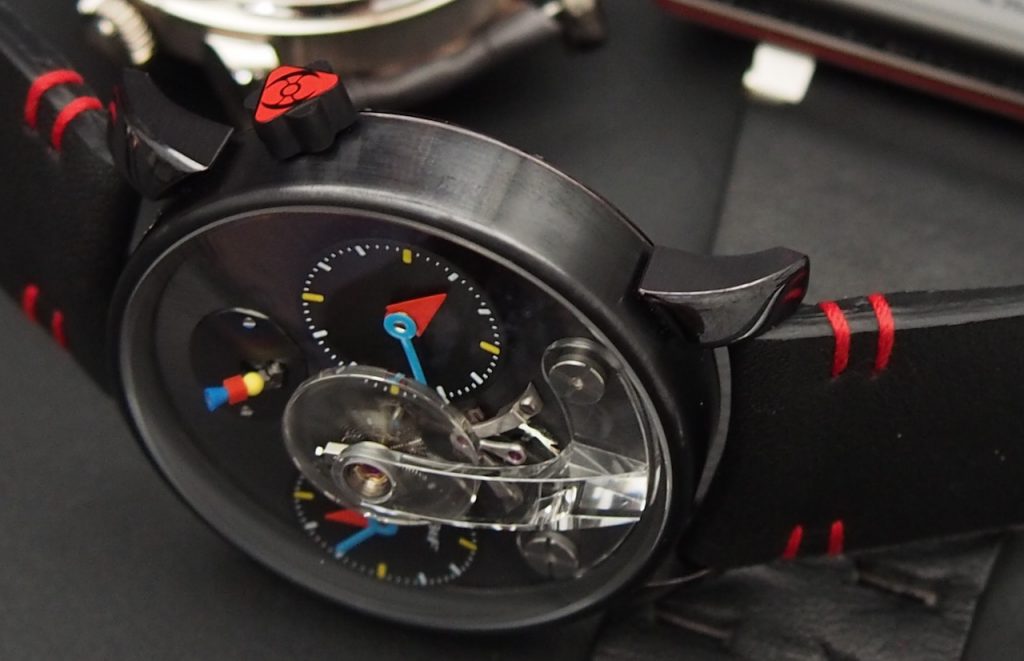 Red, blue and yellow triangular and rectangular hands and markers  in three-dimensional format grace the dial, while cubes and sphere indicate power reserve. The subdials and hands of the watch are concave instead of flat — juxtaposed to the convex sapphire domed crystal — for added drama. This all sits majestically against a black backdrop with  transparent sapphire crystal balance bridge that supports the balance wheel. This piece  was two years in the development and was essential to Silberstein’s design. The watch offers hours and minutes, as well as two independent dual time zones that can be set completely independently of each other. The LM1 Silberstein watch retails for $92,000 (plus tax) in rose gold and for $83,000 in the titanium and black titanium versions. 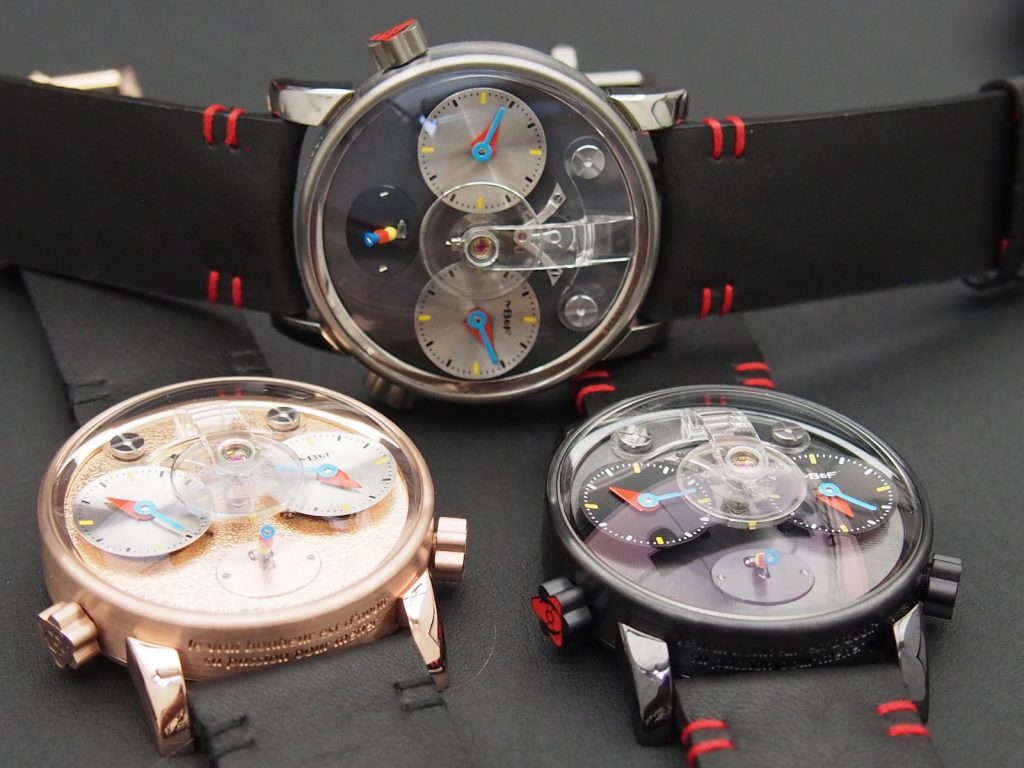