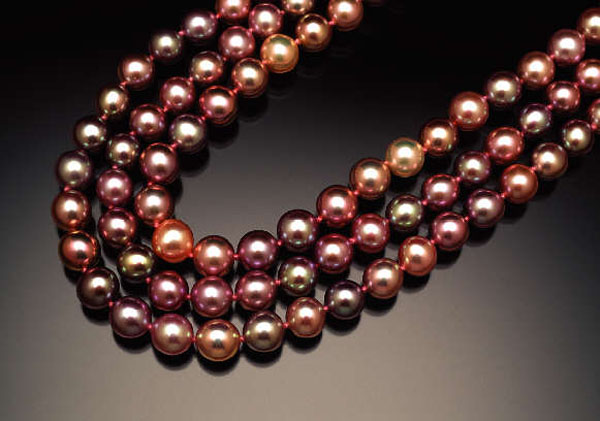 Rich brown and dark hues give these Chinese freshwater pearls even more allure.

But wait, guys. Mother’s Day is around the corner –yes only three weeks away — so you may want to read on. China has rapidly become a major player in the jewelry and watch market. In fact, according to government figures, total jewelry exports from China totaled $7.2 billion US dollars in 2013, up 6.5% from the year before. 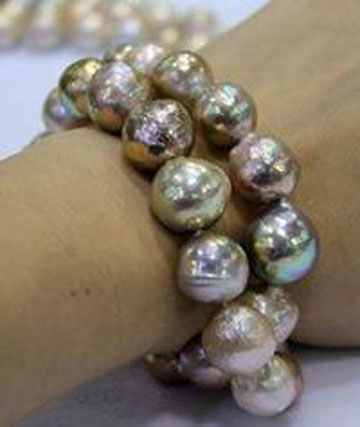 Freshwater pearls out of China are large and lustrous .

Over the past decade, hundreds of factories have sprung up just across the border from Hong Kong (where most jewelry production was done in the past) and into the mainland of China. Today, it’s not unusual for a single factory to employ hundreds — even thousands — of workers, turning out millions of dollars’ worth of jewelry that is sold around the world. Recently, there was a large trade fair in Hong Kong featuring the output of these factories, which included loose diamonds and gemstones and strings of pearls as well as collections of elegant finished jewelry, the quality of some rivaling the best of European production. Some of this the jewelry will be found in shops in the US, Europe and Asia.

A vast assortment of pearls in all shapes and sizes comes from China.

To say that China has taken over the world pearl market is a gross understatement. While Japanese akoyas and South Sea pearls still command the highest status and prices, Chinese freshwater pearls, cultivated in rivers and lakes throughout China, have improved so significantly in size, quality and color, that it is sometimes hard to tell the difference. Far from the tiny rippled rice grains of the past, Chinese freshwater pearls now include huge, gumball-sized pearls in delicate shades of peach, lavender and pink, as well as all manner of fancy shapes from baroques to coins to stars. They are styled into long ropes, waterfalls and multi-strand collars, often mixed with colored gemstone beads that reflect or contrast with the colors of the pearls. They can also be had at nice prices. Maybe it’s time to take a closer look at pearls, they’re not your grandmother’s looks anymore.