Piaget – the master of ultra-thin calibers – now releases the automatic Emperador Coussin Ultra-Thin Minute Repeater. Although it’s thin (setting another double record for the brand thanks to its slender 4.8mm caliber and 9.4mm case), it packs powerful sound. Made entirely in-house in Piaget‘s two Manufactures, the new 1290P caliber represents the fourth major complication developed by Piaget (which boasts 11 major complications among its 35 in-house developed movements). The movement was, in fact, in the development stages for three years, with six engineers dedicated to bringing it to fruition. 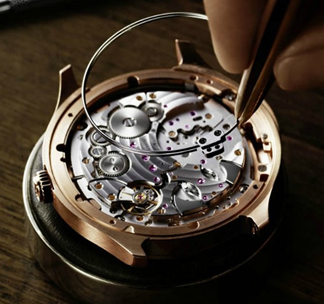 Developed on the basis of Caliber 1200P (the world’s thinnest automatic movement), the 1290P houses an amazing 407 parts – a mind-blowing number that demanded exceptional miniaturization and a refusal to compromise on the sound or on technical reliability. A daunting feat indeed, that called for each part to be skillfully thought out and shaped. Some components measure as little as 0.07 mm. The microrotor is designed in platinum to guarantee the best possible winding power within a minimum thickness.