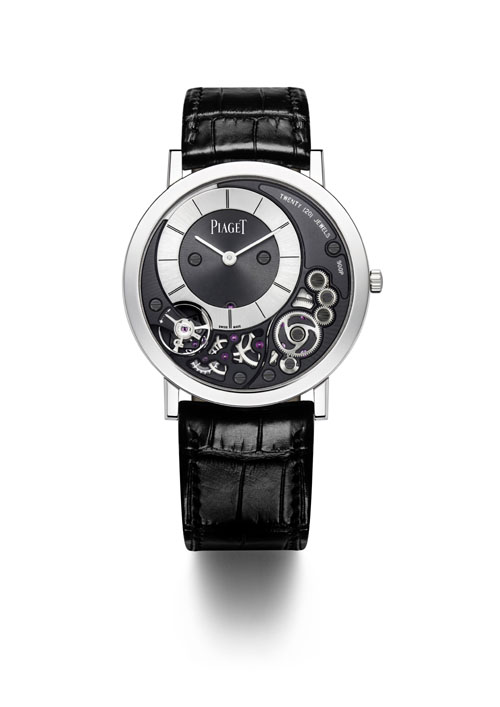 Three years in the development stages, the all new Altiplano 900P from Piaget was worth the wait. The watch breaks records, sets records and holds a patent all at the same time. It is the world’s thinnest mechanical watch – built so that the movement actually merges seamlessly with the case in a revolutionary concept that is mind boggling. The crowning achievement is being unveiled at the SIHH in Geneva in January 2014 when the brand celebrates its 140th anniversary. 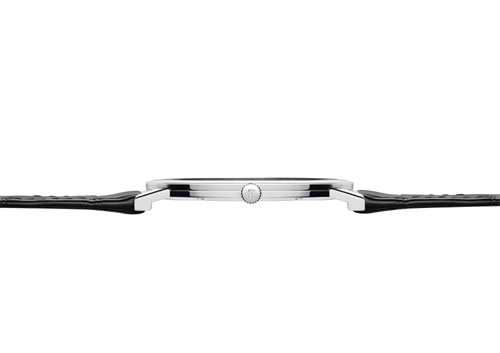 The Piaget Altiplano 900P is the thinnest mechanical watch in the world.

Neither entirely a case nor entirely a movement – the Altiplano 900P is equipped with a hand-wound caliber whose parts are merged with the case and built as a single entity – thereby enabling it to achieve its record-breaking slimness of 3.65mm thin for the entire watch. The case back serves as the mainplate and the parts are machined directly into it – in a complex architecture that required the reversal of the movement construction so the bridges would fit on the dial side. The technical design resulted in an aesthetic beauty with an off-centered display of hours and minutes. The wheel train, complete with suspended barrel hanging from a single bridge, is entirely visible on the dial side. Despite its unusual complexity and structure, the watch boasts 48 hours of power reserve. 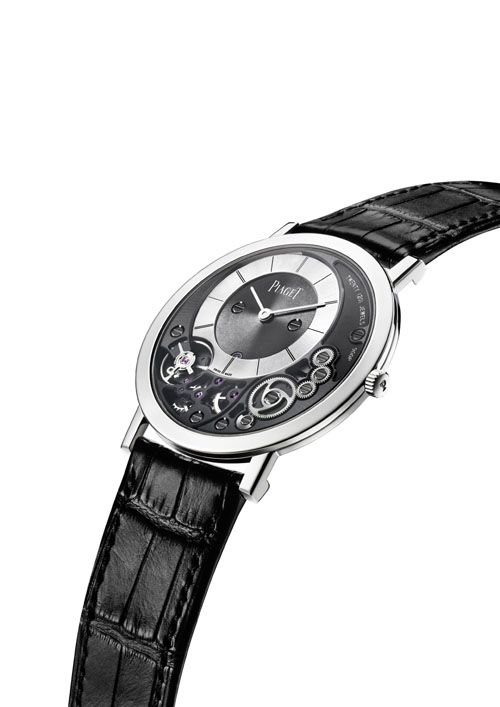 The caseback of the Piaget Altiplano 900P serves as the mainplate, and other components are carved from it in a seemless integration and an altered architecture.

Making an ultra-thin watch in and of itself is no easy feat – every part must be durable, functional, and precise.  While Piaget has mastered the art of producing slim movements and cases in house, this new case, wherein the mechanism and external movement components form a single, indivisible entity, is a masterful blend of both. At every step, watchmakers, case constructors and designers worked together to bring this slender marvel to fruition. Each of the 145 parts composing the Altiplano 38 mm 900P has been trimmed to a size sometimes barely thicker than a hair’s breadth and then is arranged to within the nearest hundredth of a millimeter to create optimal play between the fixed and mobile parts.

The watch also has a patent pending for a major development regarding physical pressure. It houses a revolutionary device that, instead of fitting the hands above the bridges, enables Piaget to place them underneath – freeing up space so that any pressure to the crystal won’t deform the hands or interfere with timing.  The 18-karat white gold 38mm watch is the stuff that dreams are made of.  Piaget, as we have said time and again here, is the leader in the world of ultra-thin movements – having unveiled record calibers as far back as 1957 with the release of the 9P caliber. The new 38mm Altiplano 900P is named after that Caliber 9P, which measured 2mm thin and brought world fame to the brand, which went on to break more than a dozen records in ultra-thin watches with 23 ultra-thin calibers. This one seals its leading position for years to come.