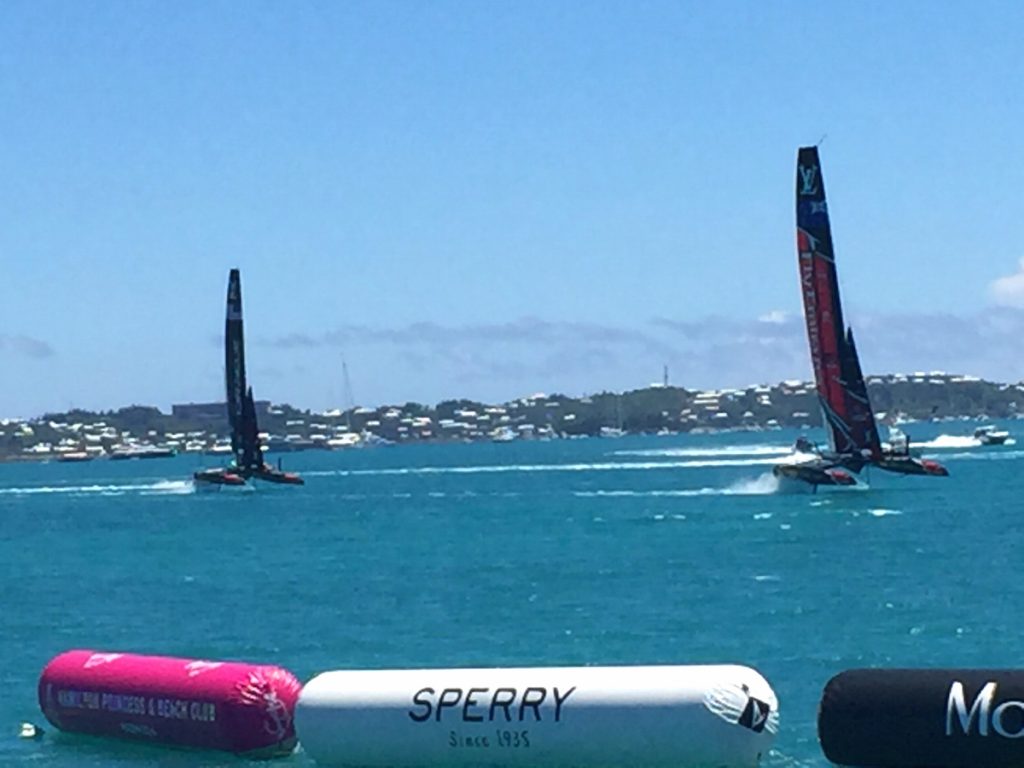 The world’s oldest sporting trophy – The America’s Cup – has left America with a resounding win on the part of Challenger Emirates Team New Zealand that left many Defender supporters feeling – well – deflated and disappointed Thanks to British watch brand, Bremont, we were there for the final races and are happy to bring complete details of that trip to you here.

The news is, of course, that yesterday, Challenger Emirates Team New Zealand took the win, almost effortlessly defeating Defender Oracle Team USA in a 7 to 1 match score, with that one win by the Defenders sparking hope, but seeming almost to have happened by chance. The America’s Cup now officially goes to New Zealand, and we will all have to wait for word on when and where the next America’s Cup will take place. Additionally, the winners also get to select what types of boats will rule the seas for the next competition. 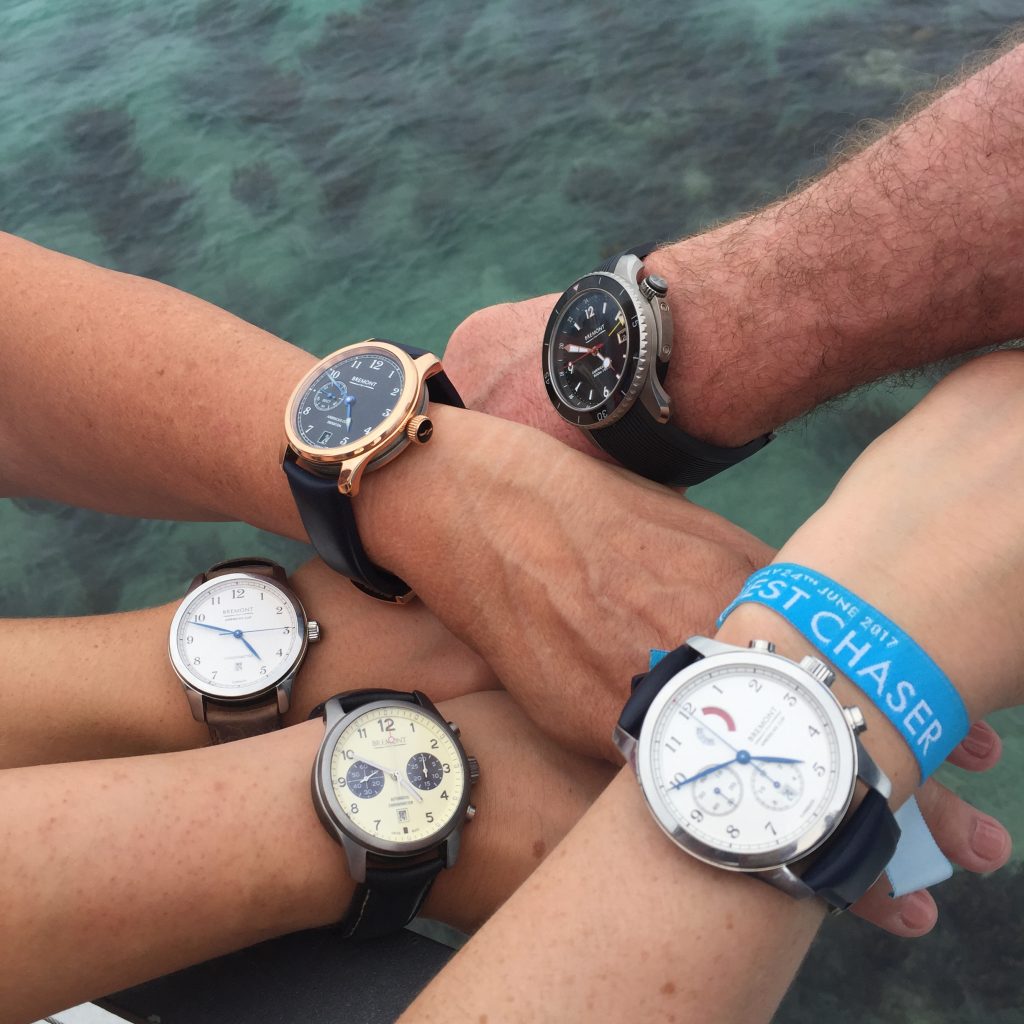 Earlier this year, we presented  a comprehensive look at the watch brands involved in the 35th America’s Cup as sponsors of, or timekeepers and partners with the various teams. In fact, we had a full week dedicated to those brands, their roles and their watches as we started into the  final America’s Cup. You can read about some of those brands and watches  here and here. It should be noted that the final teams in the America’s Cup were each supported by a watch brand. Challenger (and now holder of the Cup until the 36th America’ Cup) Emirates Team New Zealand was sponsored by Omega Watches and you can read about their timepieces here. The Defenders, Oracle Team USA had Officine Panerai as their official timekeeper this year. The brand joined the line up and officially announced its role in January of this year and you can read more about that here.

Throughout the world series, however, Bremont had been the official watch for Oracle Team USA, and held other roles. The brand has unveiled a host of America’s Cup watches as an official licensee, and you can read more about those watches here.  Additionally, Bremont has forged some pretty impressive relationships. During the America’s Cup races, Bremont and its guests were welcomed in the Official America’s Cup Lounge – with premier views of the race course on the Great Sound and spectacular views of the finish line.

Even better, we got the exhilarating experience of going out on chase boats. These boats, authorized by the America’s Cup, get special access to go within the course limits and actually power along at top speeds to try to keep up with and track the teams as they race. 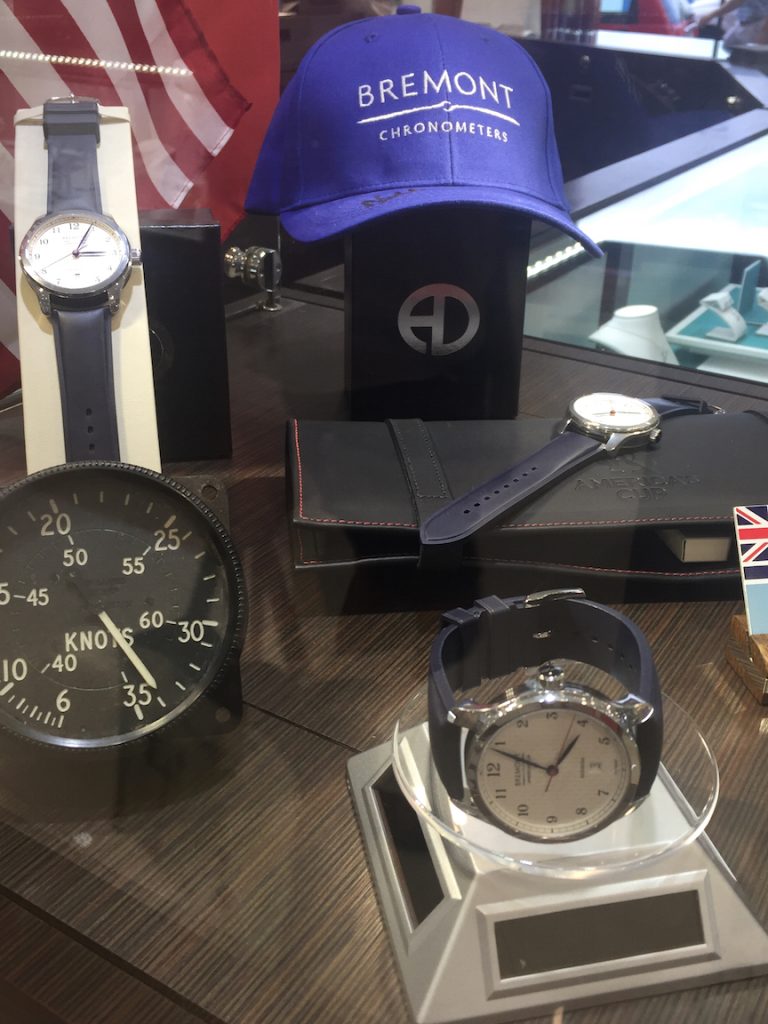 Bremont display at Astwood Dickinson Jewelers in Bermuda during the finals of the 35th America’s Cup. (Photo: ATimelyPerspective)

We arrived in Bermuda on Friday and checked into the grand Fairmont Southampton – on the hill above Horseshoe bay and with a private beach that is a really a private treasure cove. That evening, we had a wonderful experience at the local retail jeweler, Astwood Dickinson, where Bremont showed off its timepieces. It was great fun as Joey Newton, the Trimmer from Oracle Team USA, joined Tucker Thompson,  sailor turned commentator (and a great commentator at that), and Nick English, co-founder of Bremont, for a great talk about the races and what the team was up against. At that point, the score was 3-0 (with Oracle Team USA holding the zero-wins spot). The dynamics of the three speakers were wonderful, and visitors asked a host of questions about the Cup, the races and the watches. If you don’t know Nick English – too bad for you. His quick British wit and boyish humor regularly regales people, ensuring a smile on most lips, not to mention good light-hearted laughter all the way around. 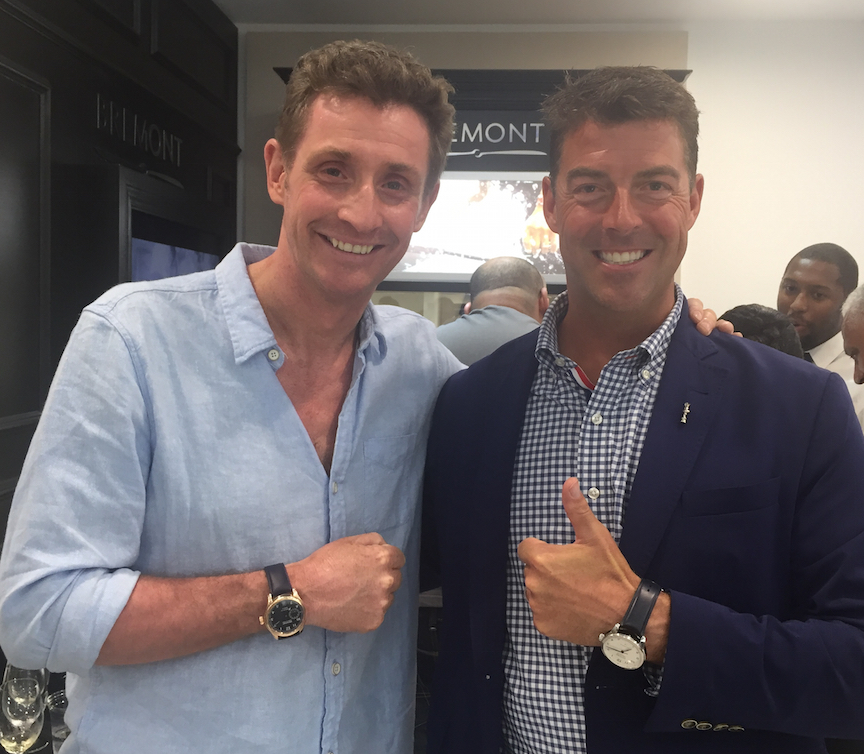 For Nick English, and his brother, Giles, being part of the America’s Cup was essential. “The America’s Cup got its start in England,” says Nick English. “How could we not be a part of it. Being British, it would seem wrong.” As such, the brand secured a relationship early on in the 35th America’s Cup. “Now, here we are in the final stretch.”

On Saturday of that final stretch, I, along with one other hand-picked editor for this trip, embarked on a skiff from the hotel across the great sound and to the America’s Cup Base. Base is a grand showing of each of the Challenger teams, with exhibition and lounge buildings, food stands, concept cars on display, and a grandstand and stage where performers like Grammy-award-winner NE-YO were live. It is almost a world’s-fair type of attitude on a much smaller scale. 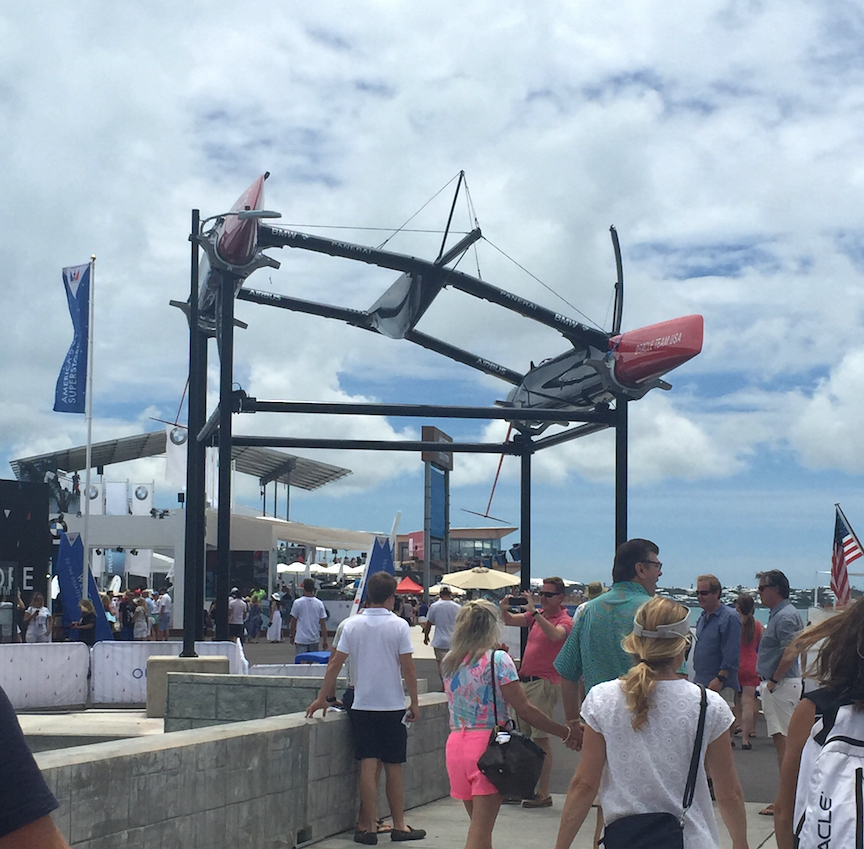 Inside the America’s Cup lounge – where Moet champagne, Dark and Stormies (Goslings dark rum and ginger beer) and island Swizzles were free flowing, we donned some SPF, the mandatory life vests, and our cameras and boarded a power boat to follow the races for the day.

The AC 50 catamarans, with wing sails and foils, are amazing boats to watch from a distance, but up close, in the water, you can actually witness the foils raising the hull out of the water, the ocean spray splitting everywhere as the boats rise and seem to fly across the seas. It is a tremendous sight that one can never tire of. If you are close enough to witness the power of the team, as well, it is a grand view. The crew move from side to side of the catamaran with such ease you would think they were running on clouds, and then quickly and nimbly drop into their tiny space for the grueling grinding or pedaling to power the hydro mechanics of these boats. 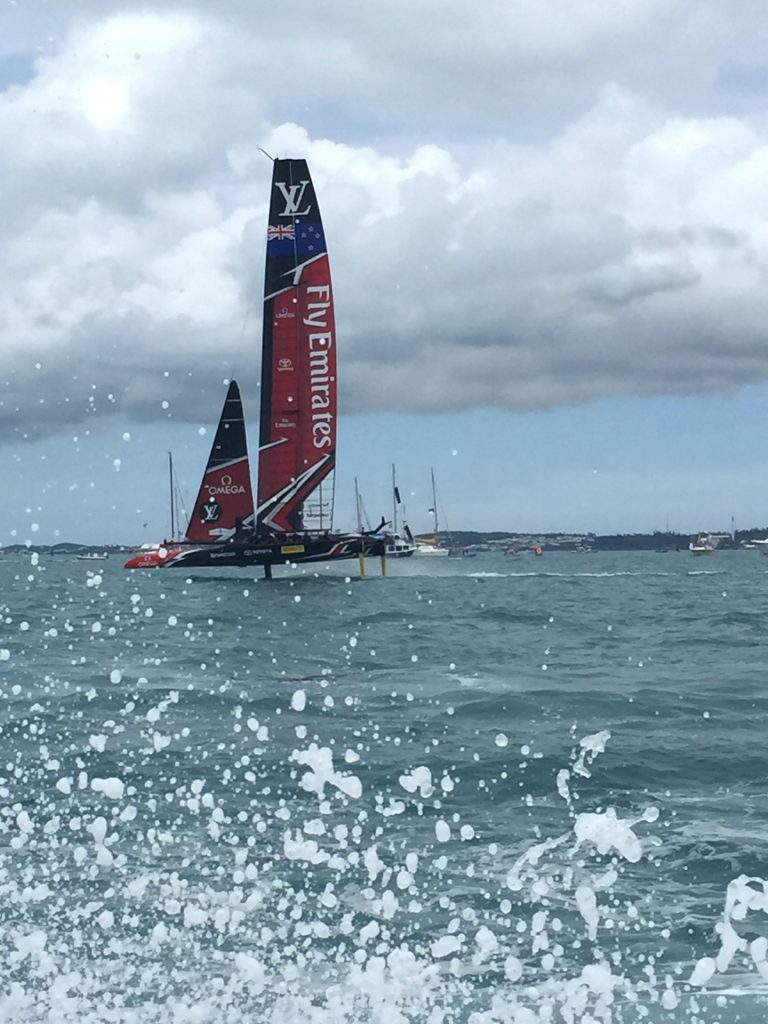 The first race of the day had the expected outcome: Emirates Team New Zealand won it – with an edge almost from the get-go. Race two took everyone by surprise (including the teams, I think): Oracle Team USA took the win. At the press conference following the races, where only the top sailing media and select other media guests (like me) were permitted to attend, ETNZ helmsman Peter Burling quipped “It was nice to see some action out of those boys,” alluding to Oracle Team USA. 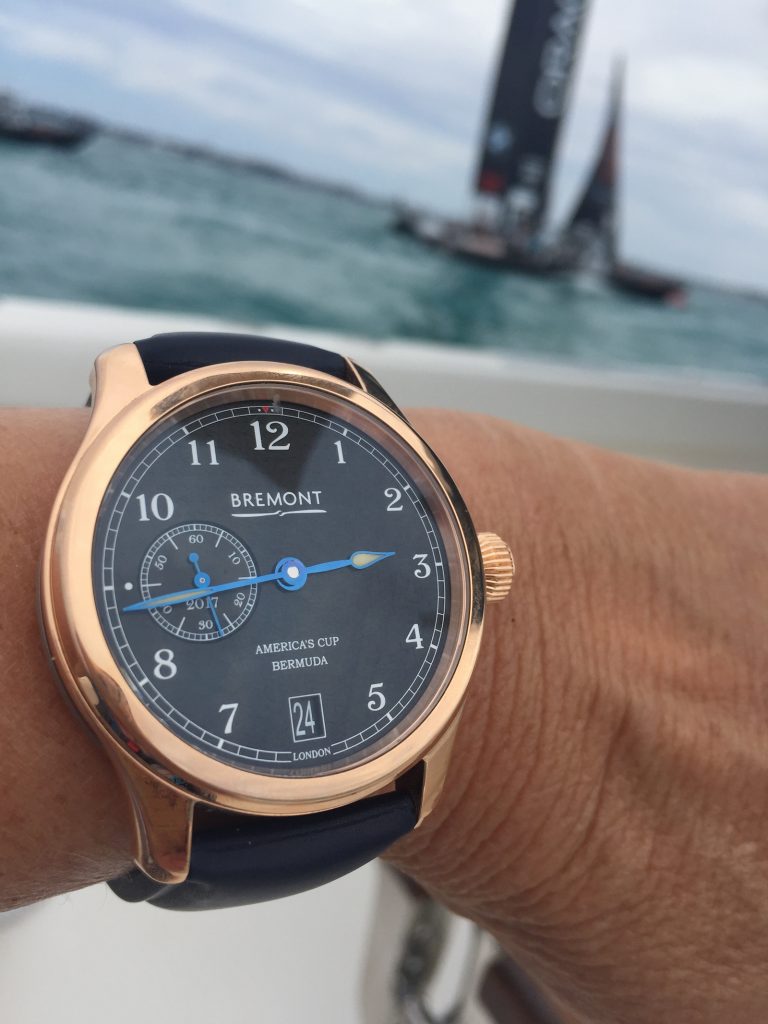 While the Oracle Team USA win was impactful on Saturday, even more impressive was the stunning  Bremont America’s Cup AC 35 18-karat rose gold watch I was wearing. An Official Licensee for America’s Cup watches, Bremont has unveiled multiple AC watches, and this one was one of my favorites. It is  water resistant to 100 meters and houses a fine automatic moment with 50 hours of power reserve. It is not only able to perform with ease, but also is  incredibly clean and sophisticated thanks to the 18-karat gold case and superb looks. The $22,495 watch went just swimmingly with my nautical attire on the water, and elegantly with evening attire, while we  enjoyed a wonderful steak dinner at one of the island’s oldest restaurants: the historic, nearly 350-year-old WaterLot, on the dock property of Fairmont Southampton. 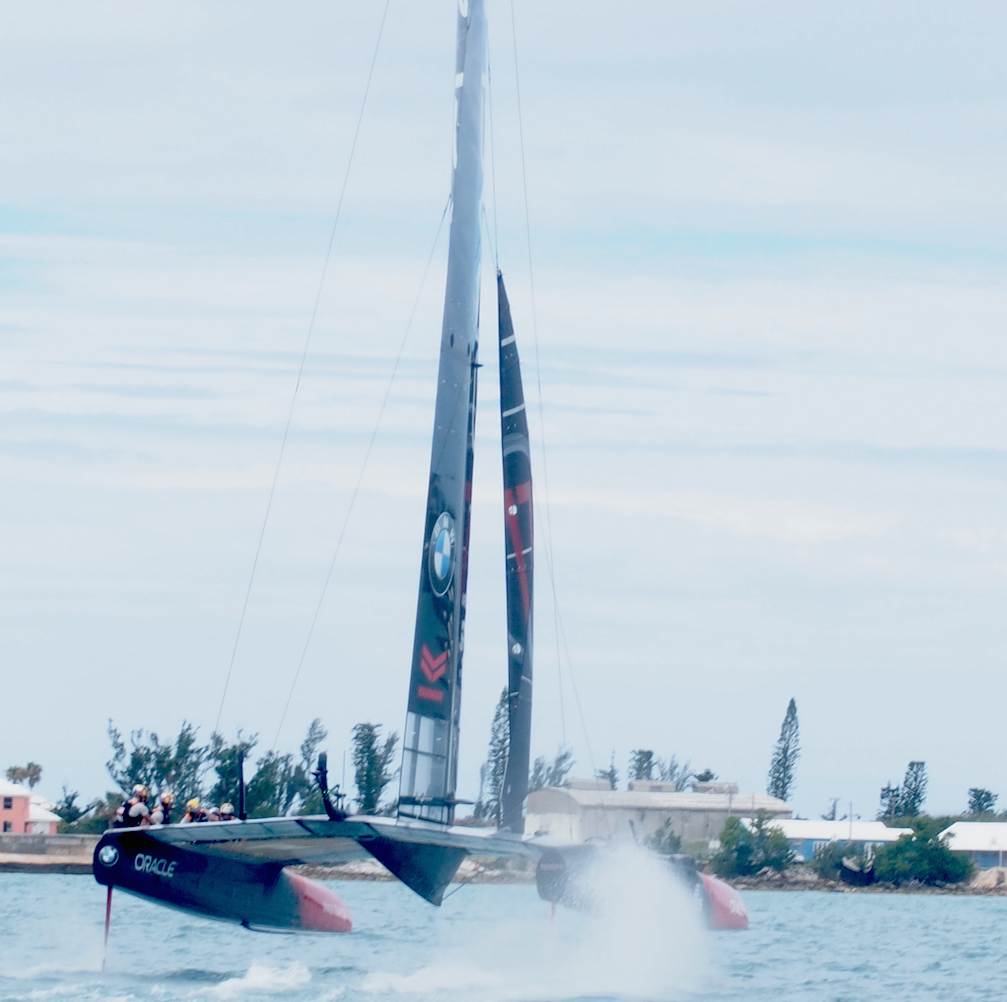 Oracle Team USA flying through the water in the 35th America’s Cup in Bermuda. (Photo: ATimelyPerspective)

On Sunday, sadly, Oracle Team USA lost both races – one due to a judgement error before the starting line by Oracle Team USA, which thought it was too fast to the line, but, in fact, would have been perfectly poised to move out in the lead had the boat not turned slightly to avoid what skipper Jimmy Spithill thought would be an early start. The other loss was also mostly due to error — leaving Spithill to admit in the press conference that day that the team would not go out and practice Sunday night, but instead would focus on land on its tactics and maneuvers and maybe even take a closer look at the crew and potential changes.

My day was much brighter. On Sunday, not only did I start with a long walk and a swim in Horseshoe Bay, but also, I donned the Bremont America’s Cup Regatta watch, with five-minute countdown to the races. This is by far my favorite America’s Cup watch. With blue strap, blue hands and red countdown regatta aperture on the crisp white dial, the stainless steel watch is simply a winning look. It features the brand’s Trip-Tick(R) case construction and is water resistant to 100 meters. It also has a winning price: $6,895. 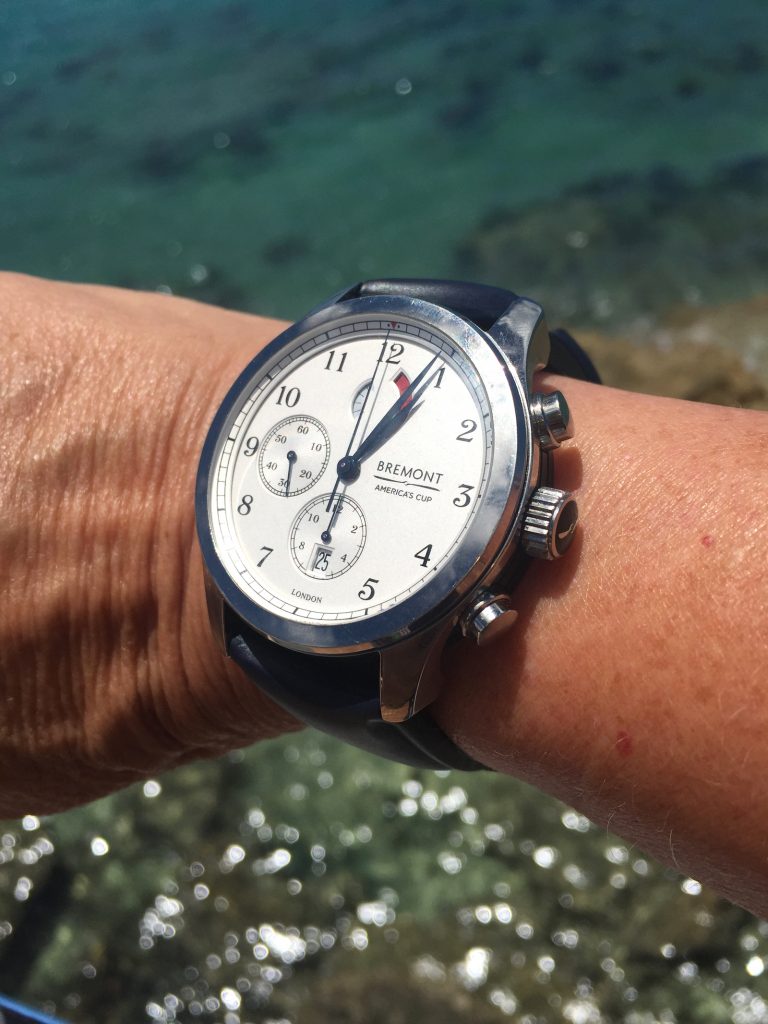 I wore the watch not only during the day in the America’s Cup Lounge and out on the water, but also to dinner at the Princess Resort & Beach Club’s 1609 Bar & Restaurant on the harbor, where we enjoyed great seafood, fantastic music and some grand Bermudian hospitality.That watch sailed beautifully from day to night.

Monday morning just didn’t’ swing in the favor or Oracle Team USA. In all fairness, Emirates Team New Zealand had a better, stronger, more powerful and technologically advanced boat and just seemed to sail the heck out of the two-time Defenders. Now, the oldest trophy in sporting history goes to New Zealand – which holds the fate and future plans for the competition in its hands. 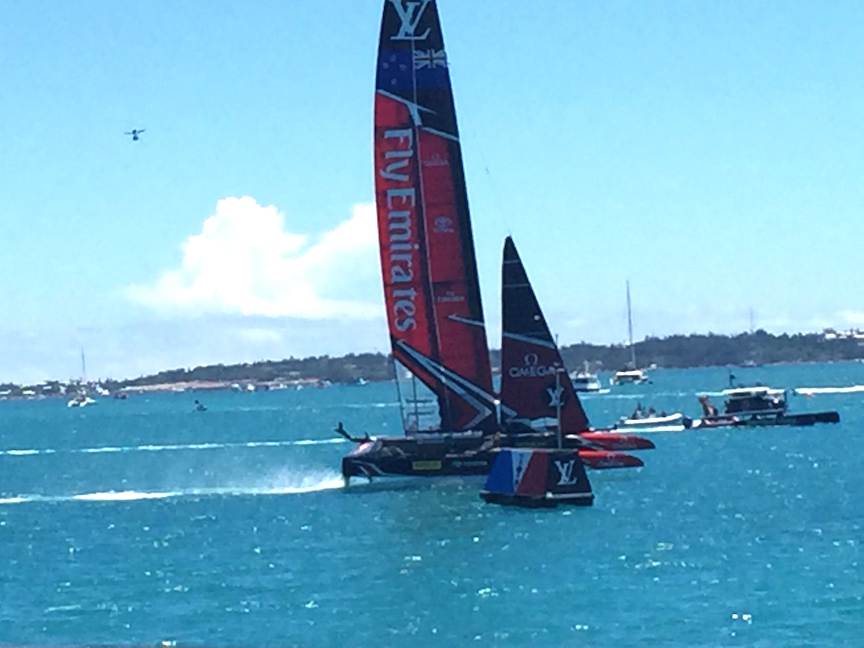 Emirates Team New Zealand coming in for the win at the 35th America’s Cup in Bermuda. (Photo: ATimelyPerspective)

Watches and the America’s Cup

We are sure of one thing, though, when the races do resume, some of the best watch brands will be a part of the multi-year event. In fact, watches have been an integral part of the sport for years. I have been covering the America’s Cup since the early 1990’s when Dennis Conner’s boat, Stars & Stripes, won the defender series, then called the Citizen Cup, sponsored by Citizen Watch Company of America. Until then, the only other watch/accessories brand involved in the races was Louis Vuitton, which had clenched the Title Sponsor role of the America’s Cup (America’s Cup Presented by Louis Vuitton) in 1983, and subsequently took the title role of the ensuing World Series qualifying races and the Challenger races.

Here at ATimelyPerspective, we have been covering the 35th America’s Cup in Bermuda since 2015, when the World Series races began. In 2016, we brought early news of the competing teams and their efforts to come out in top-seated places for the Challenger’s Series this year. You can read a lot of that coverage here.

The common ties of watches and sailing are evident: precision, technology and quest for excellence. According to Nick English, “These are the shared values, but we also believe in great team work and incredible passion and commitment to being the best.” 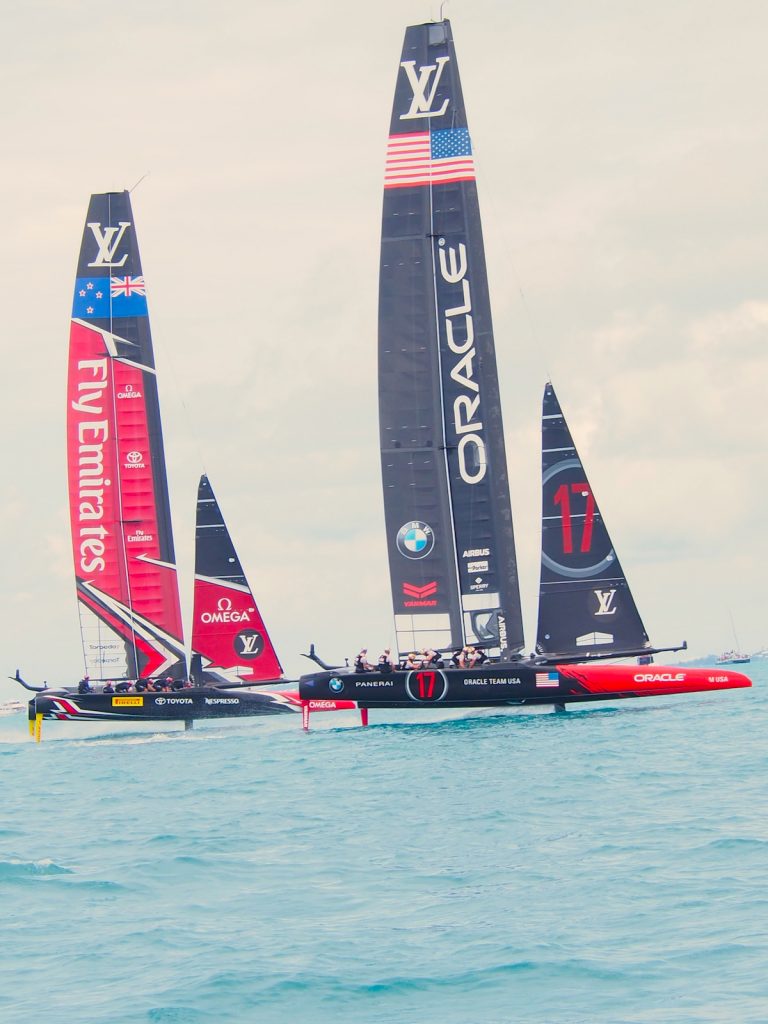 35th America’s Cup in Bermuda with Bremont Watches. It all came down to Defender Oracle Team USA against Challenger Emirates Team New Zealand, who eventually took the Cup. (Photo: ATimelyPerspective)