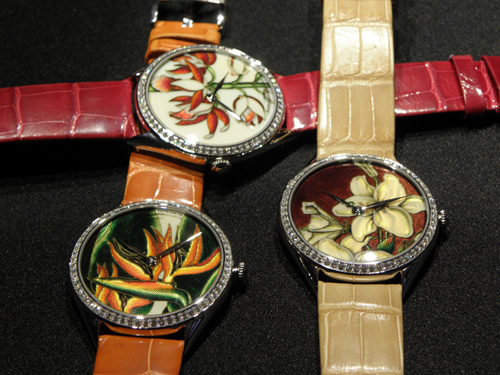 As we mentioned on Monday when we brought you a trend report from SIHH, this is definitely the year for women. In fact, Vacheron Constantin – for the first time ever –unveiled only women’s watches. From stunning new Patrimony pieces to diamond-adorned Malte watches and the pinnacle – Metiers d’ Arts pieces – Vacheron Constantin sends a clear message that it can build horological masterpieces for the fairer sex with equal savoir faire as for the men. 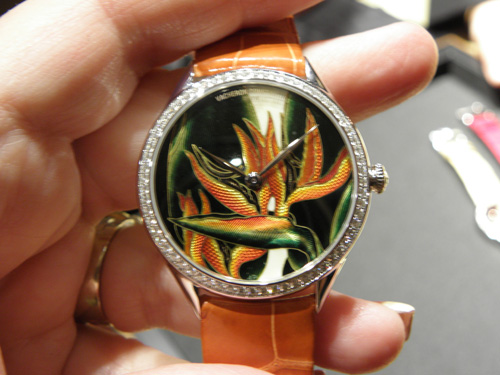 This year, a new opus called Métiers d’Art Florilège –created exclusively for women- consists of a trilogy of timepieces that pay tribute to the delicacy of nature’s finest flowers. The plants – realized in fine enamel and guilloche work on the dials – are inspired by illustrations found in the 19th century English botanical guide: Robert John Thornton’s The Temple of Flora, published in 1799. The Temple of Flora remains a work of reference more than two centuries after it was published. Thornton spared no pains in the production of his book, commissioning the top botanical illustrators and painters of the time, such as Peter Henderson, Philip Reinagle and Abraham Pether, as well as the best plate engravers in London. 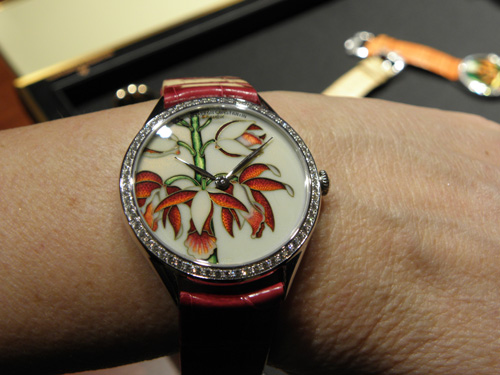 Enamel and guilloche work come together in this Vacheron Constantin Metiers d’Arts piece.

To celebrate the cultural legacy of this work and to bring the new trilogy to fruition, Vacheron Constantin turned to the unique expertise of it craftsmen and of Anita Porchet, independent artist specializing in miniatures in fired enamels, Geneva style. The artwork, reproduced in guilloché engravings and Grand Feu cloisonné enamels, comes to life in a profusion of color. Each dial gives an illusion of amazing depth and perspective, highlighted by a bezel set with diamonds. 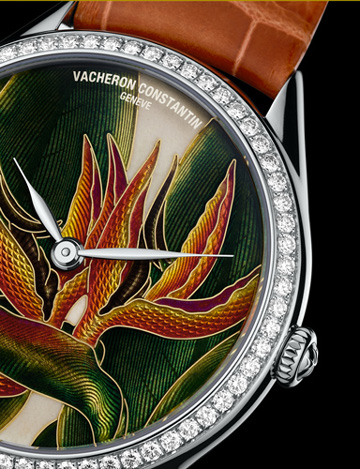 The three stunning Métiers d’Art Florilège models offered are the China Limodoronare, the White Lily and the Queen watch. Each watch is created in gold and fitted with mechanical manual-winding caliber 4400, developed and manufactured by Vacheron Constantin. The manual-wind mechanical timepieces offer 65 hours of power reserve. Each is created in a limited series of 20 pieces. Retail? A mere $125,600 for the pave diamond bezel, and $154,400 for the baguette bezel.