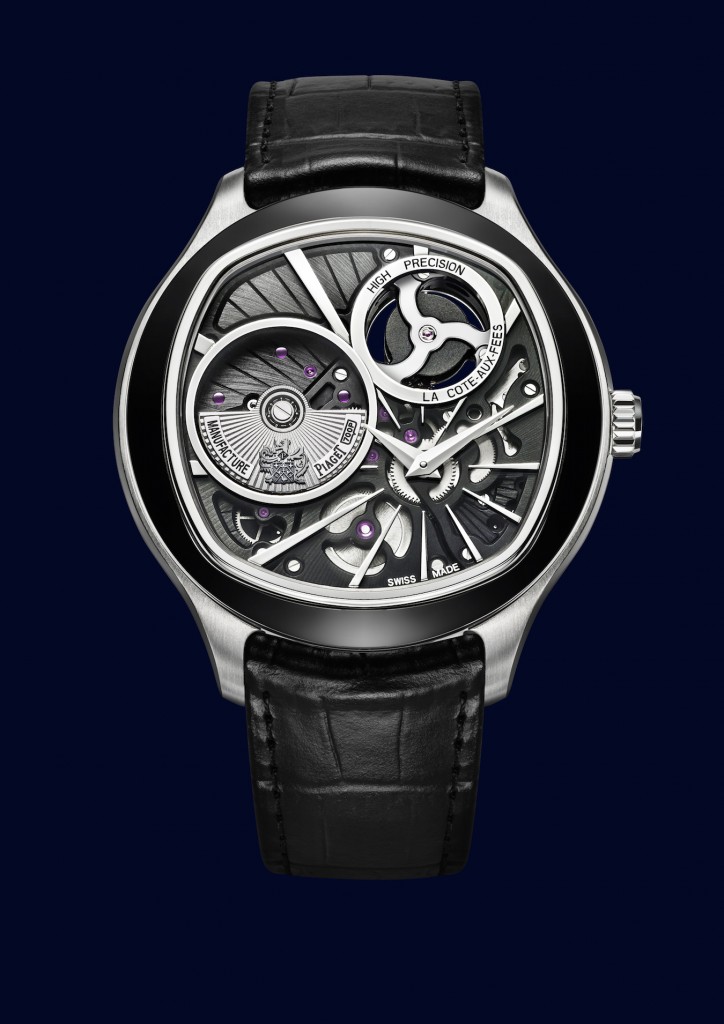 What happens when an iconic luxury watch brand with a legendary history in ultra thin mechanical watches, as well as in the quartz revolution decides to marry its  feats?  The answer lies with Piaget, here at the 2016 Salon International de la Haute Horlogerie (SIHH), where we are taking a closer look at the newest Piaget Emperador Coussin XL 700P Mechanical Quartz watch. Yes, that’s right, “Mechanical Quartz.” The new limited edition concept watch is inspired by the brand’s rich heritage – four decades – in creating ultra-thin movements.

The new 700P is a descendant of the 7P caliber—Piaget’s first in-house-made ultra-thin quartz movement unveiled inn 1976 in the height of the quartz revolution. It should be noted here that Piaget played an important role in the quartz era, as one of the key developers of the famed Beta 21 quartz movement developed in conjunction with the Centre Electronique Horloger in Neuchatel in 1970. When Piaget developed its own in-house quartz movement in 1976, it was the world’s thinnest at 3.1mm thick.

This is a regular tradition of the brand, whether the caliber is quartz or mechanical –thin rules. The astonishingly thin Emperador Coussin XL 700P concept watch, like all Piaget does, is a masterful blend of expertise and creativity.   It is powered by a generator-regulated mechanical movement. It also represents the first time the brand has combined Swiss-Made electronic regulation with its reverse-construction caliber. 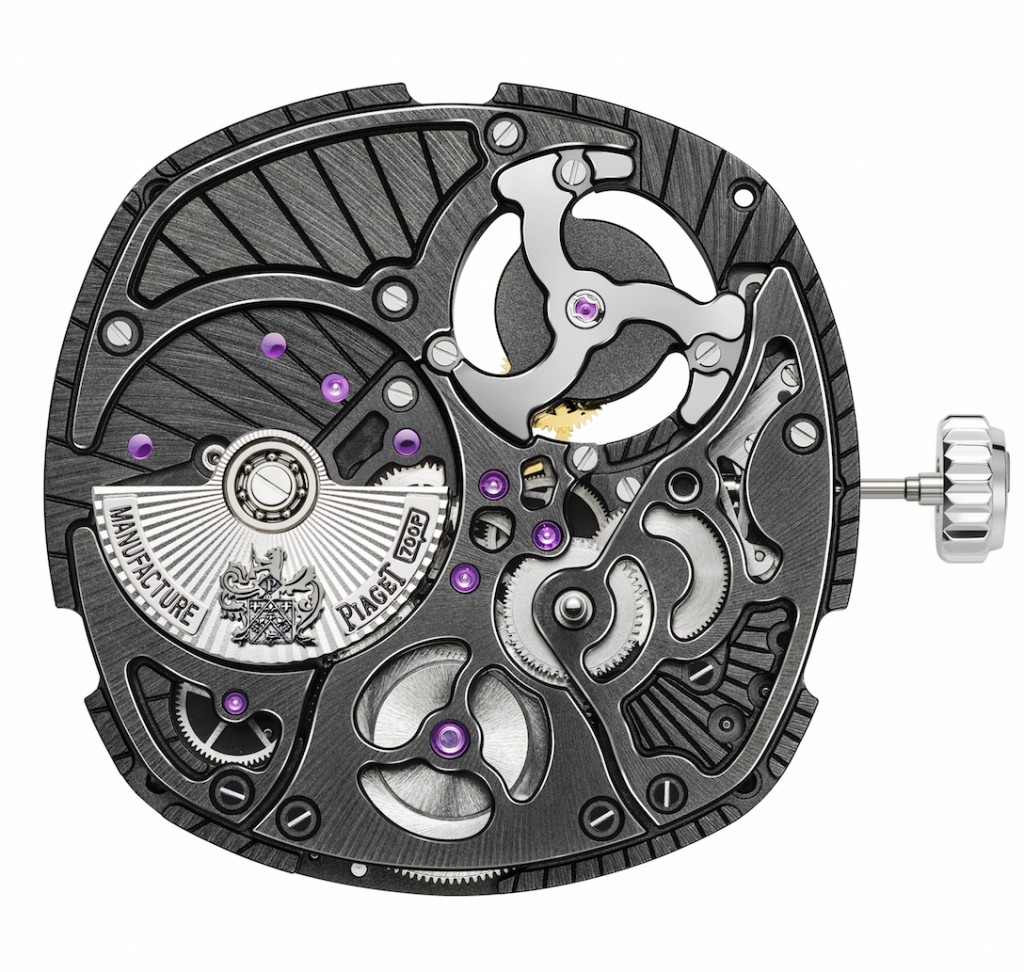 High-frequency quartz, oscillating at 32,768 Hz, controls the speed of the rotation of the generator and wheel train – ensuring precision.

The accomplishment of this watch was two years in the R&D phases and is based on a concept the brand registered back in 1972. Ten patents have been filed on this electronically regulator self-winding movement.

High-frequency quartz, oscillating at 32,768 Hz, controls the speed of the rotation of the generator and wheel train – ensuring precision. The device rotates at 5.33 turns per second and is housed at the heart of the mechanical movement. It is also resistant to magnetism and the effects of gravity thanks to the architecture of the case. 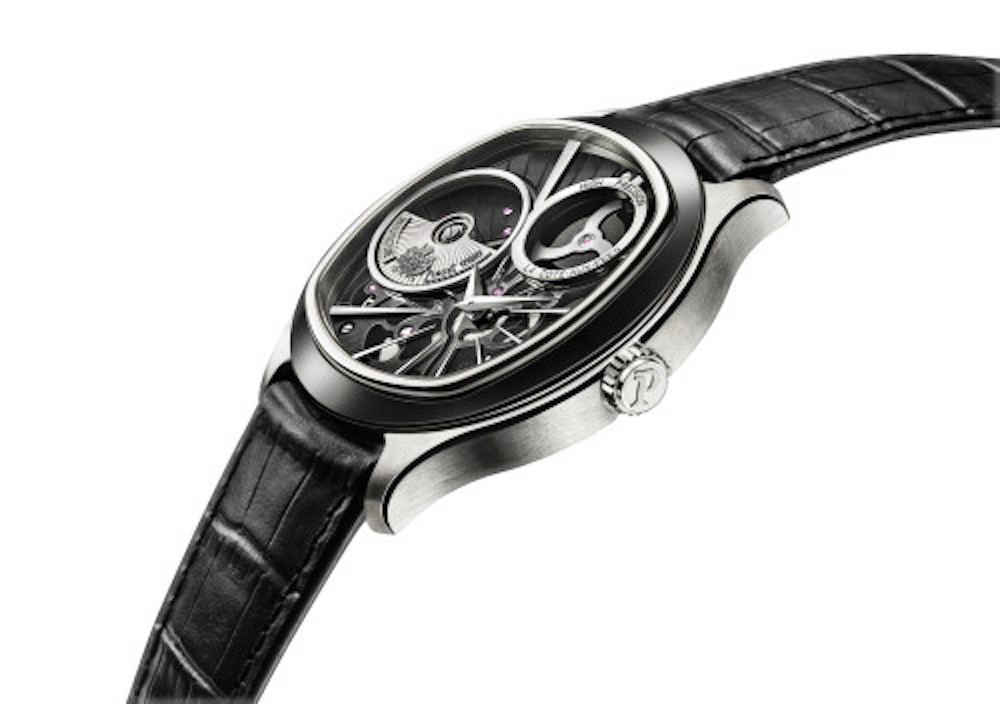 Just 118 of the concept watch will be made.

The cushion shaped Emperador Coussin is a 46.5mm white gold watch is part of the brand’s Black Tie collection. It boasts powerful lines and impressive elegance. The watch, as mentioned above, features a reverse, or inverted, construction with the micro-rotor on the front side of the watch. The watchmaking mechanics take the place of a dial, and the offset oscillating weight and the generator form an alluring figure 8 motif that immediately draws the eye in.

The micro-rotor is adorned with the Piaget coat of arms and the watch features   chamfered bridges, circular stain-brushed wheels and silver-toned screws against a deep-black motif. The 18-karat gold bezel is black ADLC-coated for a stealth appeal. Just 118 pieces will be built.