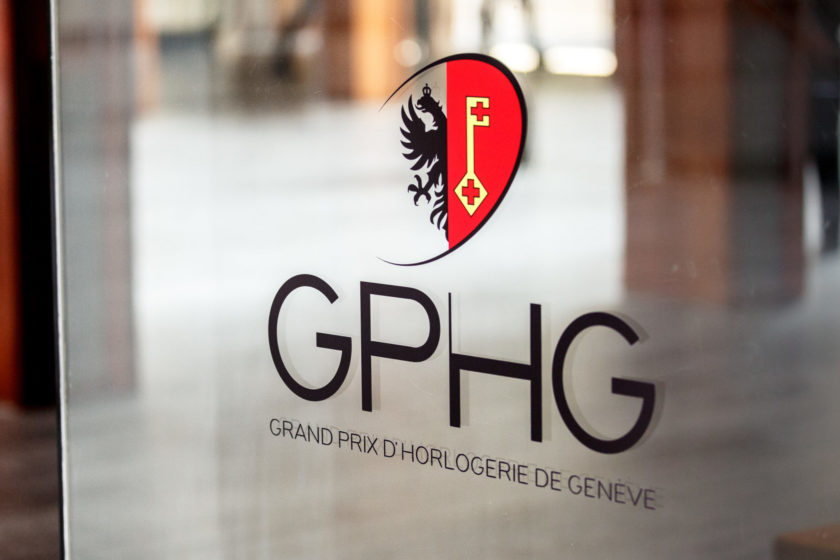 With GPHG Awards taking place on Wednesday, we are wrapping up our coverage with the Mechanical Exception category. The pieces found in this category check all the boxes for horological geekdom. The category requirements looks for a special mechanism such as an unique display, striking component, a belt driven movement, or other innovations in the market place. This year is no exception and each piece commands numerous man hours and showcases how far each of the manufactures have been able to push the boundaries of hand crafted pieces. 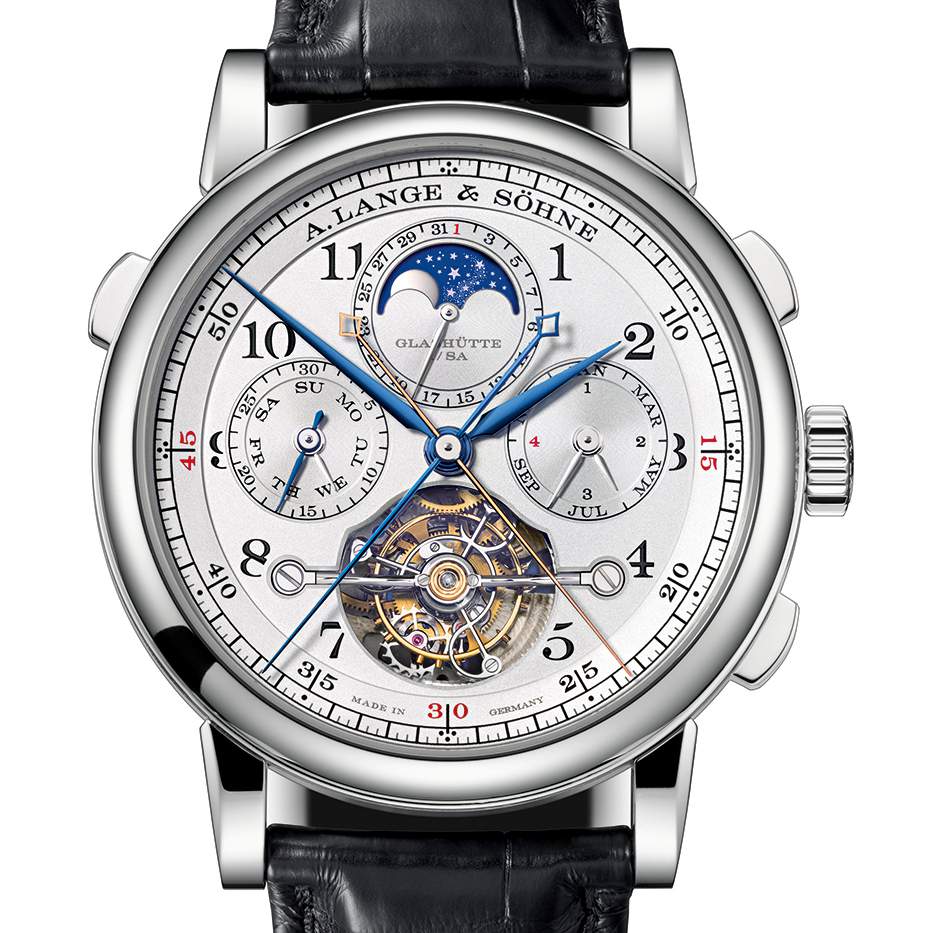 The latest from A. Lange in the “Pour Le Merite” series is the 5th masterpiece in the line. For the piece the manufacturer has added placed together a fusee and chain transmission, tourbillon, chronograp, rattrapante function and perpetual calendar. Currently this is A. Lange’s most complicated watch and if you have followed the line, that is saying a lot. Housed in a 43mm platinum case, the piece pays tribute to A. Lange’s pocket watches. The perpetual calendar is accurate to the year 2100 at which point a one time correction will need to be made on the last day of February. After the adjustment the piece is then accurate until for another hundred years. The chronograph function is operated by three pushers. The traditional chronograph pushers are found on opposite sides of the crown, while the third pusher found at the 10 o’clock position operates the split second function. To improve stability and accuracy the piece features a one minute tourbillon which helps to counteract the disruptive affects of gravity and a fusee and chain mechanism that helps to counteract the loss of torque in the mainspring barrel. The line is limited to 50 pieces in platinum. 525,000CHF. 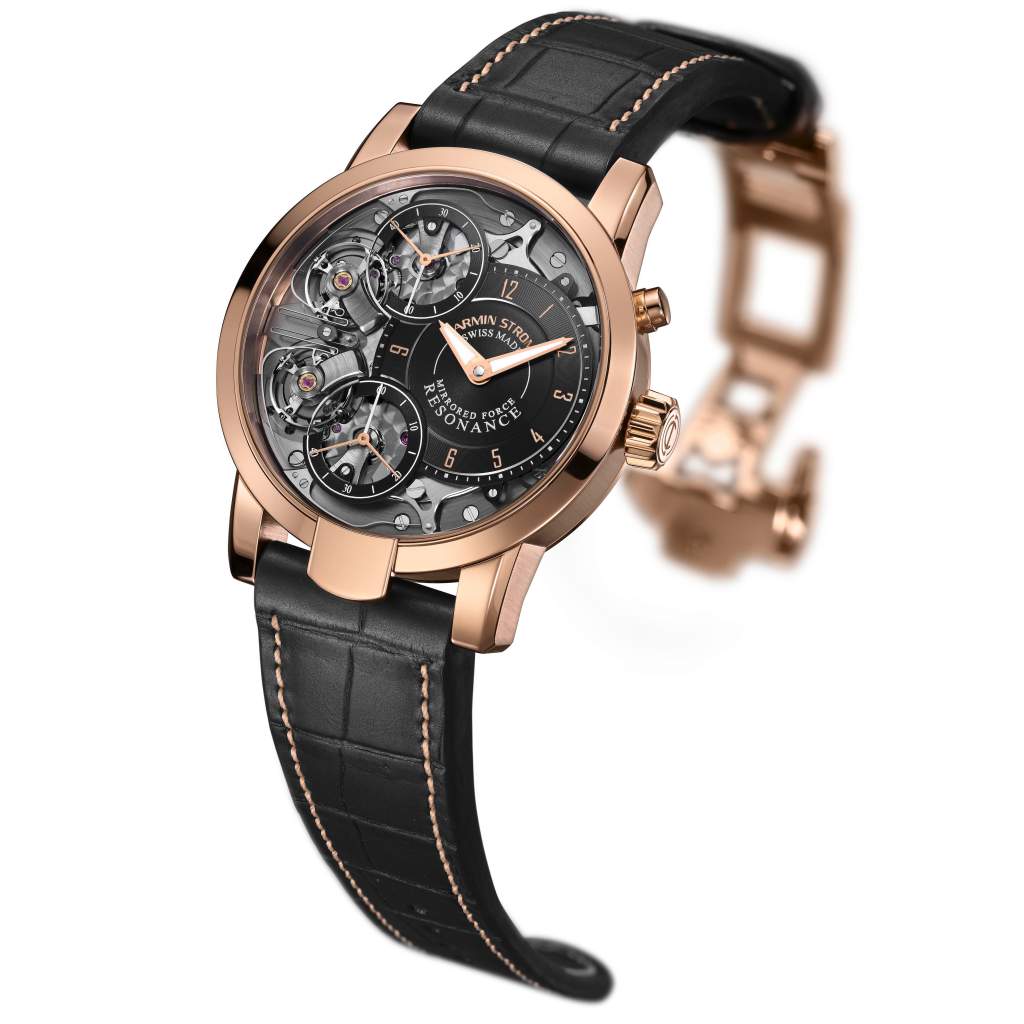 In an effort to drive precision in the horological space Armin Strom’s Mirrored Force Resonance takes advantage of the phenomenon in physics that watch is named for. Resonance occurs when a system is able to store and easily transfer energy between two or more different modes, eventually moving towards synchronization. Due to the sophistication and difficulty in creating the complication it is rarely seen and used. As a matter of fact, there have been only two manufactures that have successfully used resonance in a piece, Antide Janvier (1751-1855), Abraham-Louis Breguet (1747-1823). The benefits of executing on the feature, however are well known. The three main benefits are 1) offering a stabilizing effect on timekeeping, 2) a conservation of energy, 3) a reduction of negative effects due to shock and external stimuli to the timepiece. The piece is powered by the manually wound Caliber ARF15 and the two connected oscillators which move in opposite directions are prominently displayed on the dial side of the watch. The view allows for an animated display of the functionality of the complication that piece takes its name for and when seen live is truly captivating.Just 50 pieces will be made. 67,000 CHF. 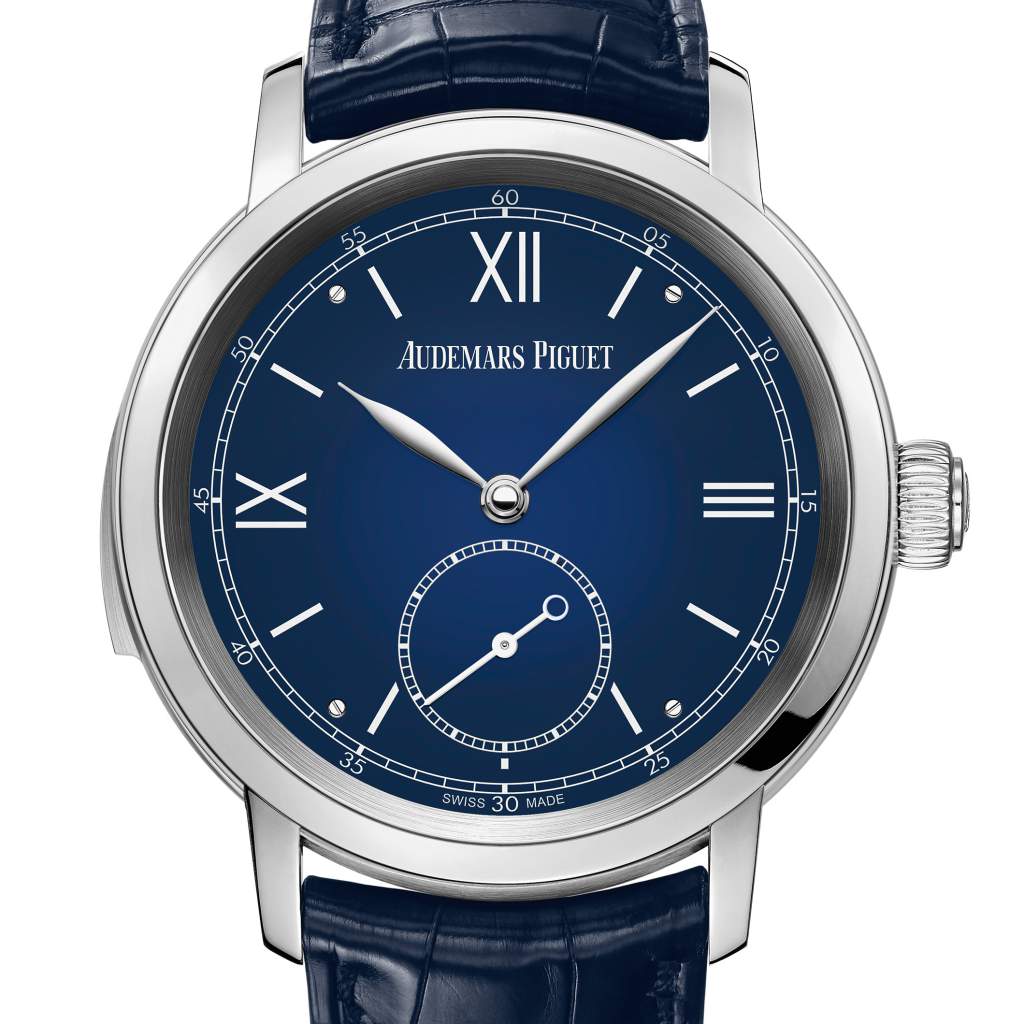 The latest from Audemars is a refresh of the 2016 Jules Audemars Minute Repeater Supersonnerie. The supersonneire started as a concept watch in 2014 to push the innovation of sound in a minute repeater watch. The impressions of the piece when shown to the horological community were that AP had largely succeeded in their plans. In the release of the 2016 and 2017 the acoustic advancements have largely been incorporated into the pieces. The 2017 version has been updated with refined bezel, enameled dial and Roman numerals also done in enamel. The case is done in platinum and the hands are white gold. The distinctive blue dial starts off light in the middle and as you move to the outer edges of the face of the dial becomes darker. To match the blue, the piece comes on a blue alligator strap and the case back is engraved with the image of a watchmaker at his bench.  325,500 CHF 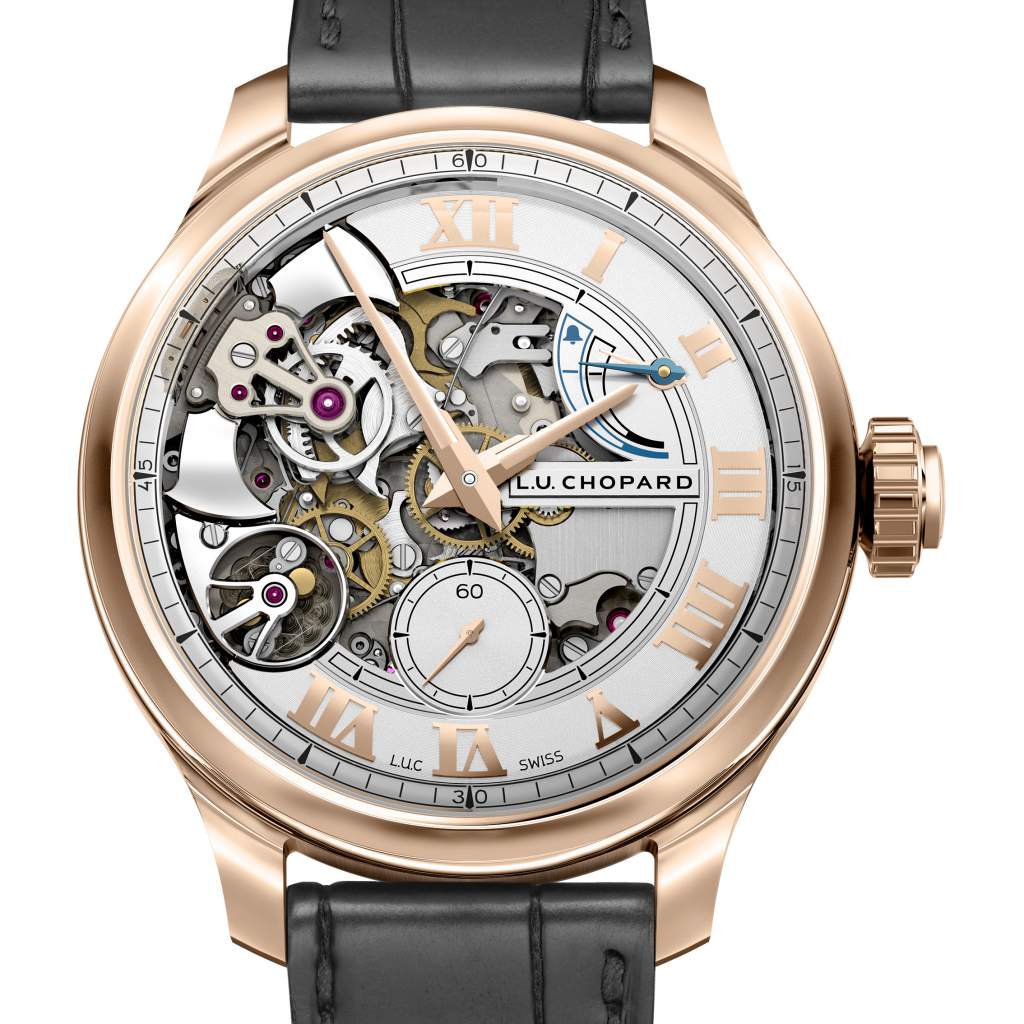 Limited to just 20 pieces, the Full Strike marks the 20th anniversary of Chopard as their first minute repeater. The minute repeater sounds hours, quarters and minutes on transparent crystal gongs. The dial has been open worked to allow a full view of the mechanism when it is engaged and the gongs are visible at the 10 o’clock position. At the 8 o’clock position the mechanism that governs the rotations of the strike governor can be found. This particular component is important as it helps govern the pauses between strikes to help distinguish between the different times being indicated. Six years of research and 17,000 hours were required to create the calibre 08.01-L and bring the Full Strike to market. Great care must be taken with minute repeaters while the chimes are engaged to make sure that human error doesn’t harm the system while the tones are playing. Chopard has introduced a number of safety measures to prevent against such issues. Seven security devices ensure that the minute repeater mechanism is properly protected. The crown winds the movement in one direction and the striking mechanism in the other. The power reserve indicator indicates the power of the movement as well as the remaining power of the minute repeater itself. The details of the movement are hand finished with circular graining, straight graining, or with a Cotes de Geneve motif.  245,000 CHF 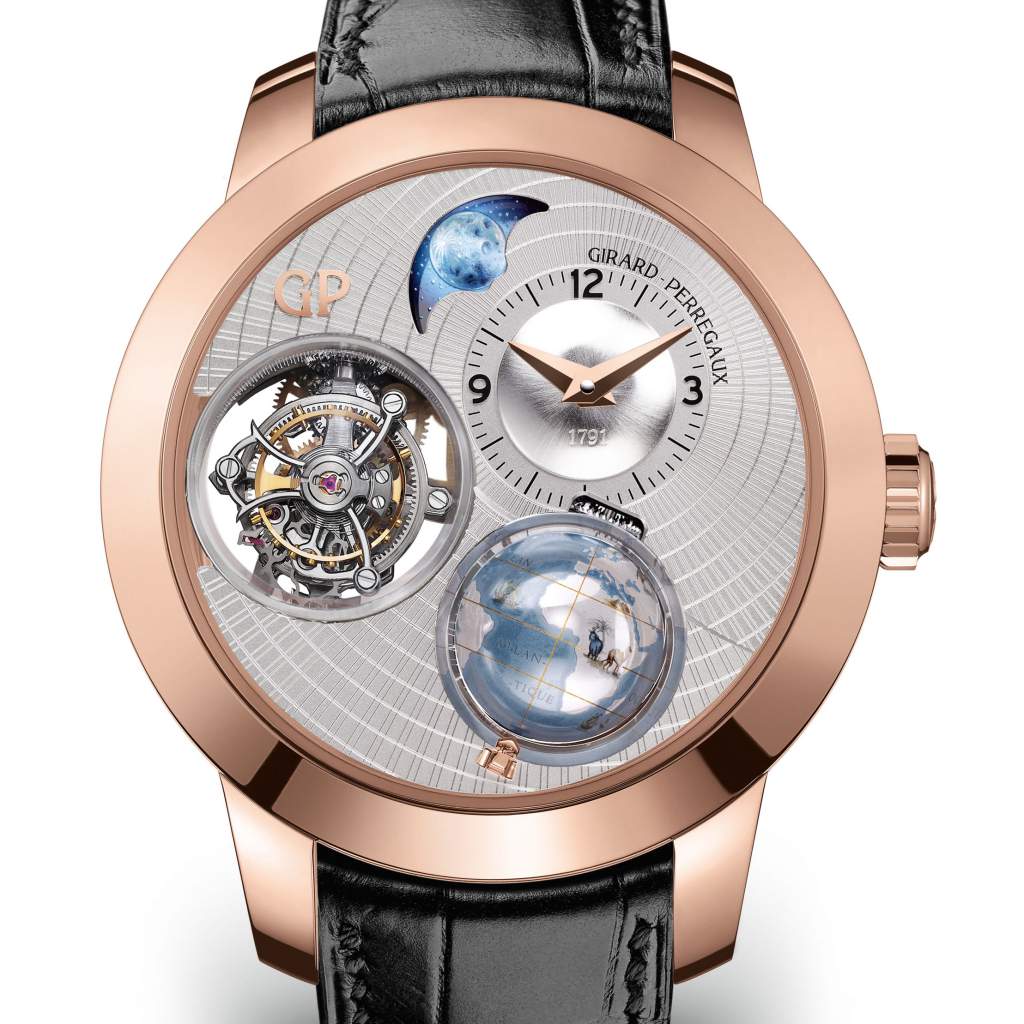 The piece features three elegantly executed components prominently on the dial, a rotating globe with day/night indicator, a precision moon display and a tri-axial tourbillon. The high speed tri-axial tourbillon features a regulator operating on three axials vs just one. The tourbillon weighs only 1.24 grams, is composed of 140 parts and completes one rotation per minute. The globe, measuring 13mm in diameter, rotates once every 24 hours and by reading the arrow positioned at the base of the globe, the wear of the watch is able to distinguish where it is daytime at anywhere on the planet on the front of the watch and night for anything to the back of the watch. The depiction of the globe is as it was in 1791 which is a nod the date the manufacture was founded. The same time stamp goes for the moonphase indicator which depicts the nighttime sky as it would have looked through the lens of a telescope in the same year. The moonphase is accurate to 122 years. Powered by the hand-winding Manufacture GP09310-0001 calibre, the Planetarium offers a robust 70-hour power reserve.  273,100 CHF 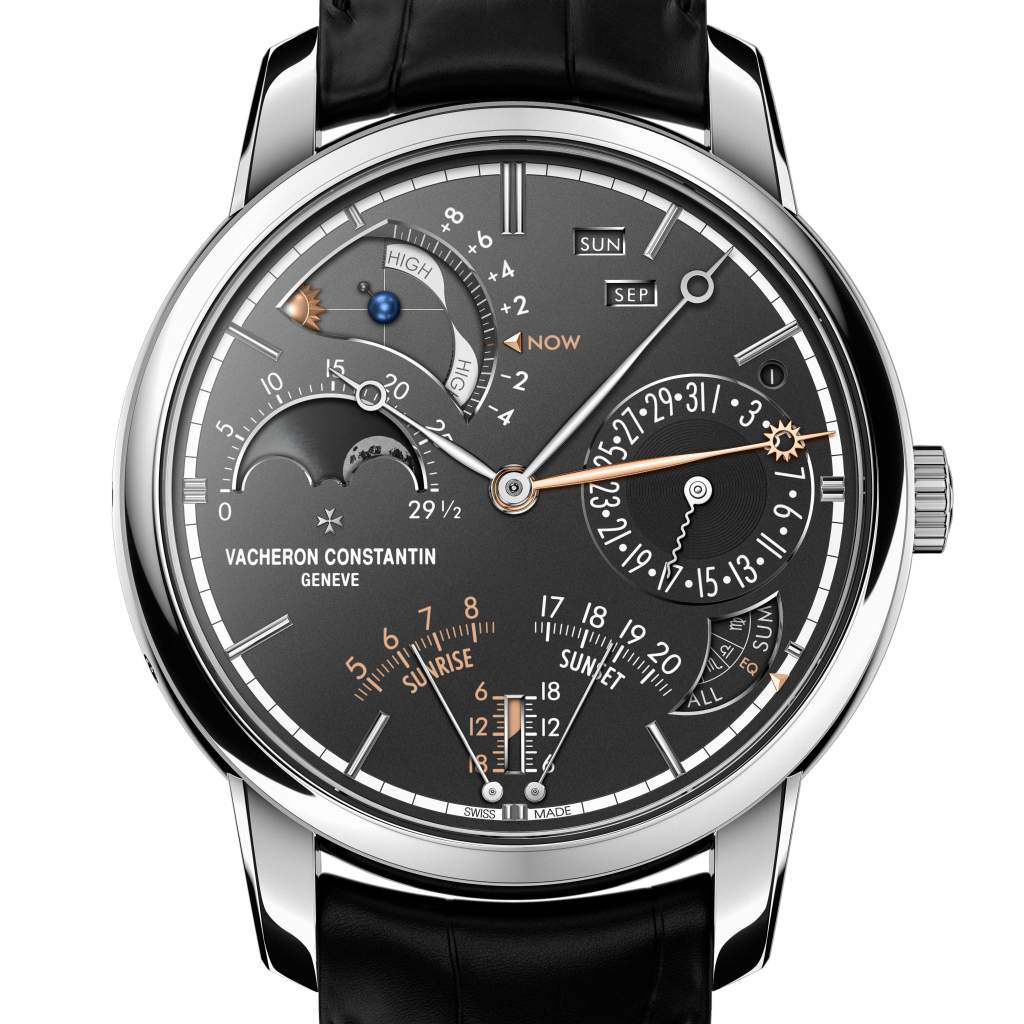 For the Les Cabinotiers the best word to describe the complications assembled within the piece is everything. Just everything: Hours, minutes, perpetual calendar, day/night indication, precision moon phase, age of the moon, running equation of time, sunrise and sunset time, day and night length, seasons, solstices, equinoxes and zodiacal signs, tide level indicator, Sun-Earth-Moon conjunction, opposition and quadrature, transparent sky chart of the northern hemisphere with indication of the Milky Way, of the ecliptic and celestial equator, hours and minutes of sidereal time, tourbillon, 3 weeks of power reserve (6 barrels), power reserve indication. A total of 23 astronomical complications appear on both the front and back of the piece and allows for time to be told civil, solar and sidereal with each being driven by its own gear train. Adding to the technical proficiency of the manufacture, Vacheron has been able to house the 514 part caliber into a movement 8.7 mm thick and the six barrels powering the movement, when fully wound, provide three weeks of power reserve. The piece is a one of a kind.

Gordon Henderson: Wow, just wow. If your brain isn’t melting out of your ears right now, you need to check your horological nerdom. Each manufacture deserves a slow 80s clap for the amount of technical innovation that they have been able to fit into a disc that fits on your wrist. So which one wins the category? In the humble opinion of this editor this will be an area  that is almost too call. Visually the both the A. Lange and Girard Perragaux speak to me. The classic A. Lange styling elements work with any complication and are instantly identifiable. The Girard Perragaux offers a clean delivery with the dial and allows for each of the three elements of the piece to standout prominently on the dial. The globe and moonphase work and its amazing. With that being said, the technical tour de force that is the Vacheron Constantin Les Cabinotiers Celestia Astronomical Grand Complication 3600 is too much to not win. It’s one thing to be able to tell time, innovate from an accuracy standpoint and offer other distinctive features, but to be able to tell time three ways, drive accuracy through the incorporation of a tourbillon and provide an unreal 3 week power reserve is amazing. Also only one will ever be produced. Mic drop.