It is with a truly sad heart that I write of the loss of my very dear long-time friend and colleague, Peter Laetsch. Peter and I started in this industry at just about the same time in the mid 1980’s. I was a watch journalist for National Jeweler and Peter was the then-second in command of the US division of the Federation of the Swiss Watch Industry (FH).  He was my knight-in-shining-armor at our first Basel Fair together when I had mega  problems  and he stepped in and fixed everything on the first night in an ever so-gentlemanly way.  We became friends for life. 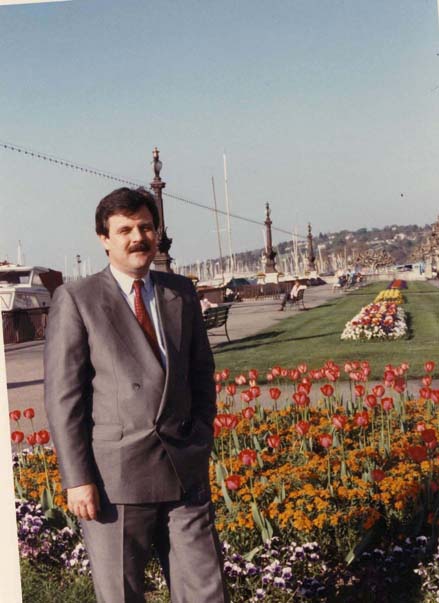 Peter Laetsch in Geneva in the early 1990s.

Warm, funny, genuine, Peter was an amazing supporter of the Swiss watch industry. He was president of the Swiss Watch Federation  in America since 1986 and for five years in that post he was instrumental in spreading the word about the Swiss watch industry to the public at large via a comprehensive education program. He assisted Federal and Local law enforcement agencies in anti-counterfeit efforts. In fact, due to his diligence, I was one of the few reporters ever allowed on reconnaissance with the New York police as they uncovered hundreds of counterfeit Swiss watches.

Peter conceived of, and was instrumental in creating, the Coalition for Watchmaker Education (CWE) in America in 2000, and as chairman of CWE’s education committee he fought  for reforms in the then-11 USA watchmaking schools that would enhance the concept of watchmaking as a career. He was the first man to bring together the associations and the schools in one conference in New Orleans to discuss and actively outline concepts on how to save and promote the profession of watchmaking. Peter was visionary in his ideas. Not everyone would agree with him. Sometimes his opinions were not always liked, but once behind something, he carried on and usually prevailed with success.

Peter died at the young age of 64 — with nearly half of his life devoted to the Swiss watch industry.  Prior to that – with his engineering degree — he was involved in the oil business, and lived for a few years in India. He had great memories of this time, as well, and shared his stories and insights with a gusto that defined him.  He had a passion for watchmaking and embraced life with a powerful thirst. We shared amazing times at the Basel Fairs and even better times in America – where he never tired of implementing new and intriguing strategies for Swiss watch awareness – strategies that struck a chord with me because Peter saw things in the US watch world differently than most. During his nearly 3-decade-long stint in the watch industry, he also served as chairman of the Joseph Bulova School of Watchmaking Board of Trustees, was a member of the 24 Karat Club of New York, of the National Association of Watch and Clock makers, was chairman of Trustees of the National Instituted of Watch making and so very much more. In 2001, Peter founded Swiss Time Promotions, wherein he assisted young Swiss watch brands in their efforts to enter the US market. Ever the consultant and friend of the industry, Peter never lost his sense of humor, his passion or his belief in all things Swiss. I am proud to have been able to call him my friend for 30 years and I am incredibly sad to lose him. I will miss his voice, his smile, his laughter and his insightful take on life and time.