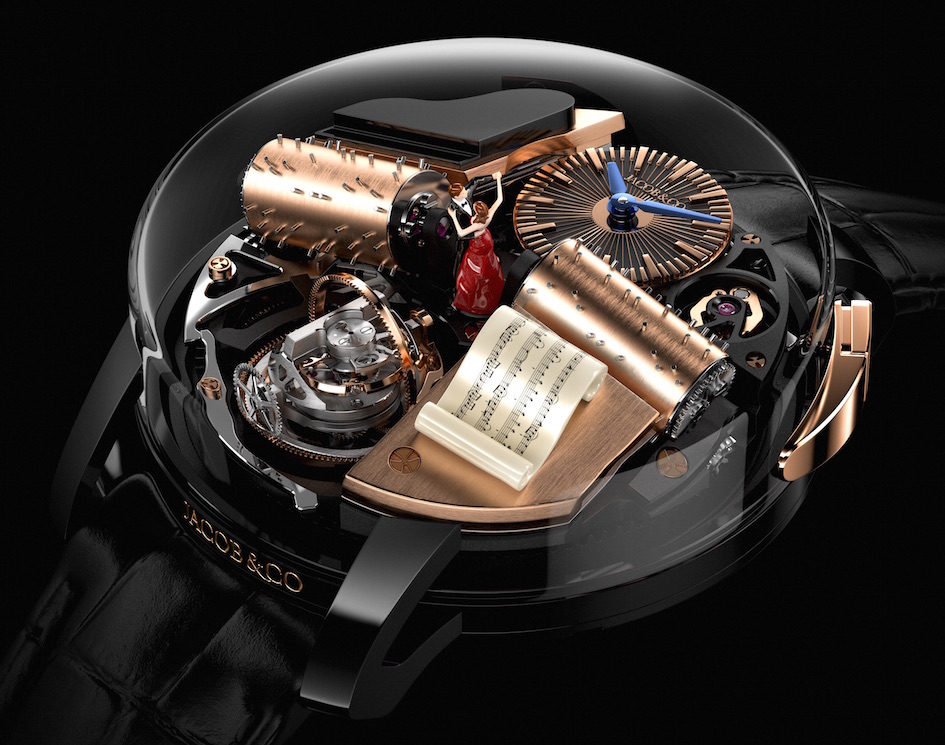 Opera by Jacob & Co. offers a music box on the wrist.

If you are a lover of the opera, or of music boxes, the newest Jacob & Co. Opera watch just might be for you. We say “might be” because this one is pretty far out there in the design. The three-dimensional watch depicts a couple dancing in the center of the timepiece, surrounded by musical scores, the time, a multi-axis tourbillon and music box cylinders that actually play a tune. The remarkable watch, however, may be just a bit over the top unless you have some very specific design tastes.

The Technology of the Opera by Jacob & Co.

Unlike a repeater or carillon, this musical watch incorporates the basis of a Swiss mechanical music box and plays the melody from the musical Cats: Memory by Andrew-Lloyd Webber via 120 notes. It should be noted that  Jacob & Co. is not the first brand to use musical cylinders in its timepieces. In fact, Ulysse Nardin has done this several times before in a wristwatch, starting with the Stranger watch. Additionally, MB&F unveiled its MusicMachine — a tabletop piece that played music — in 2013, working with Reuge Music.

However, giving credit where it is due, this newest Jacob & Co Opera watch — to be unveiled officially at BaselWorld 2017– has some added technical mastery. In addition to playing music on 120 notes (all in a timepiece that is just about two inches and sits on the wrist), the watch also offers a miniature three-dimensional musical presentation that rotates around the dial. When the tune is activated via a push piece at 2:00, the movement, upon which the parts rest, rotates 120 degrees so that the entire dial presentation (dancers, etc.) rotates as well.

The manually wound Caliber JCFM02 was specially developed for this complication using titanium components for lighter weight and stronger sound. Exactly 650 parts comprise the movement. The watch is  offered in two versions: this unique piece and a second model being built in a limited edition of 18 pieces. 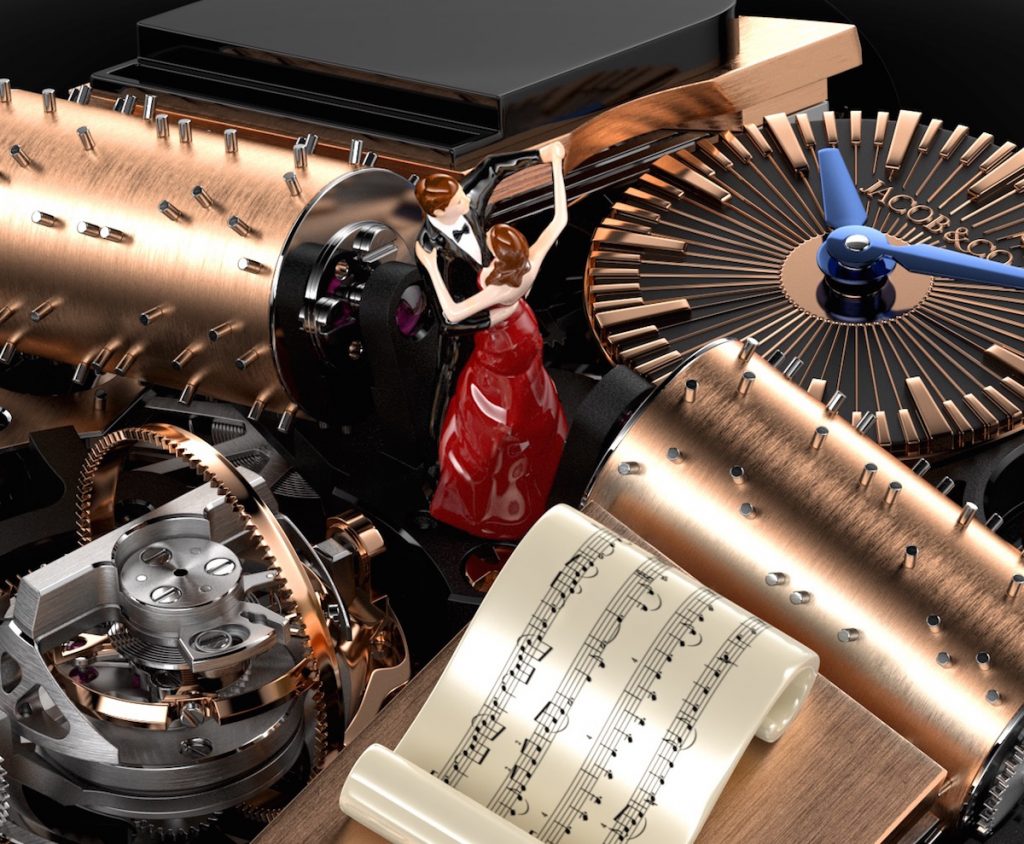 A close-up look at the Jacob & Co Opera watch shows the beauty of the teeth on the combs of the music cylinders.

For the unique piece, the movement features two tiny figurines in the center, depicting a couple dancing to the music. Also visible is a grand piano and a musical scoresheet. At 12:00, a small dial depicts the hours and the minutes, and opposite it at 6:00 is the continuously moving, ever mesmerizing triple-axis tourbillon. The case is a sophisticated sapphire piece that encircles the watch movement—making the movement, the cylinders and combs and the accent night-at-the-opera motifs visible from all angles. The version being made in an edition of 18 pieces is more minimalistic in its look and has black and gold finishes, as well.

While I am a fan of the Astronomia collection by Jacob & Co. that also uses the sapphire domed case architecture, and of many of his other watches, this watch is maybe a little too schmaltzy for me — thanks to the dancing figures who remind me of the bride and groom atop a wedding cake. While they are finely hand-painted miniatures, they just don’t do it for me. I do, however, love the idea of using traditional music cylinders and combs in a wristwatch — there is something somewhat magical about it.  And I love the baby grand and the music sheets…  just not of the dancers.But then, that’s a personal thing. Overall, it’s musical adventure.

Tech Specs of the Opera by Jacob & Co.