A Look At The Dubai Watch Week, Christie’s Horology Forum, Where Minds Meet 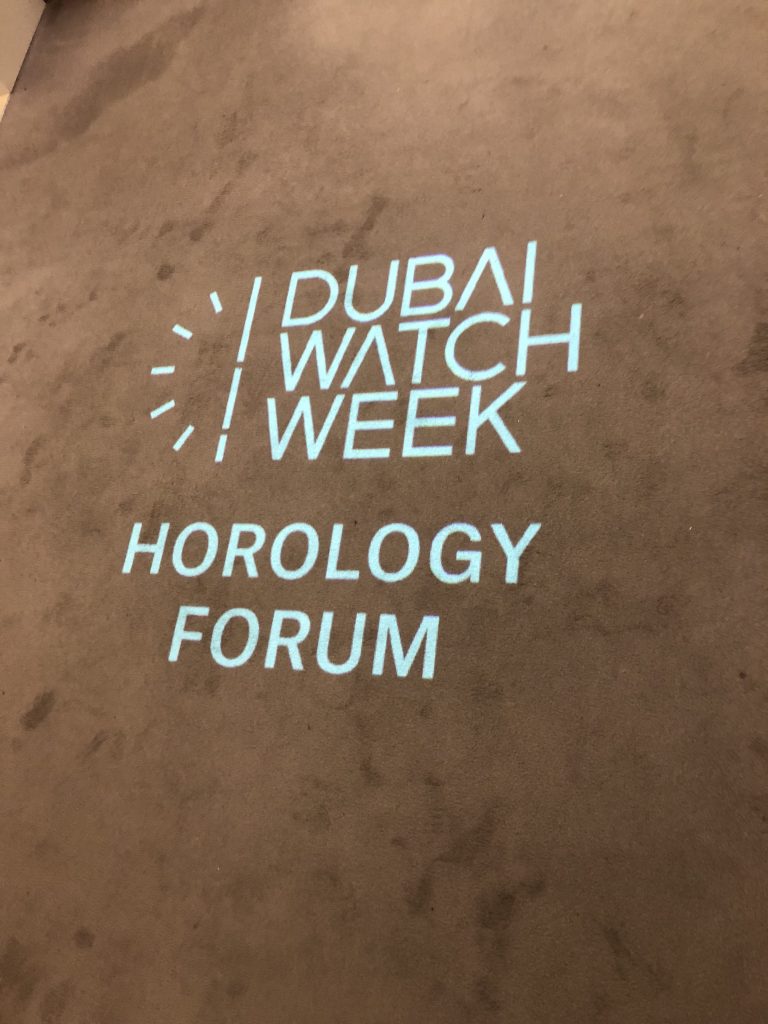 The week before last in London, Christie’s and Dubai Watch Week co-hosted a Horological Forum where some of the best industry executives joined together for two days of panel discussions about the watch industry. I covered the event on my Perfect Timing column on Forbes, and now i bring some of that story here. I would like to preface the articles  by staying that what was truly unique and wonderful about this event is the fact that CEOs, watchmakers, designers (and even my friend Aldis Hodge — actor/watchmaker/artist) participated side by side, openly sharing their thoughts on a wide variety of topics.  Dubai Watch Week has been held in Dubai for three years — 2015, 2016, and 2017,and while I was invited to the event each year, I had conflicts in travel schedules that precluded me from joining. The same almost happened this year, as I was already engaged with another trip for day one of  this shortened international forum that took place in London. Lucky for me, my other trip was also in London, and so I was able to attend day two of the Forum. 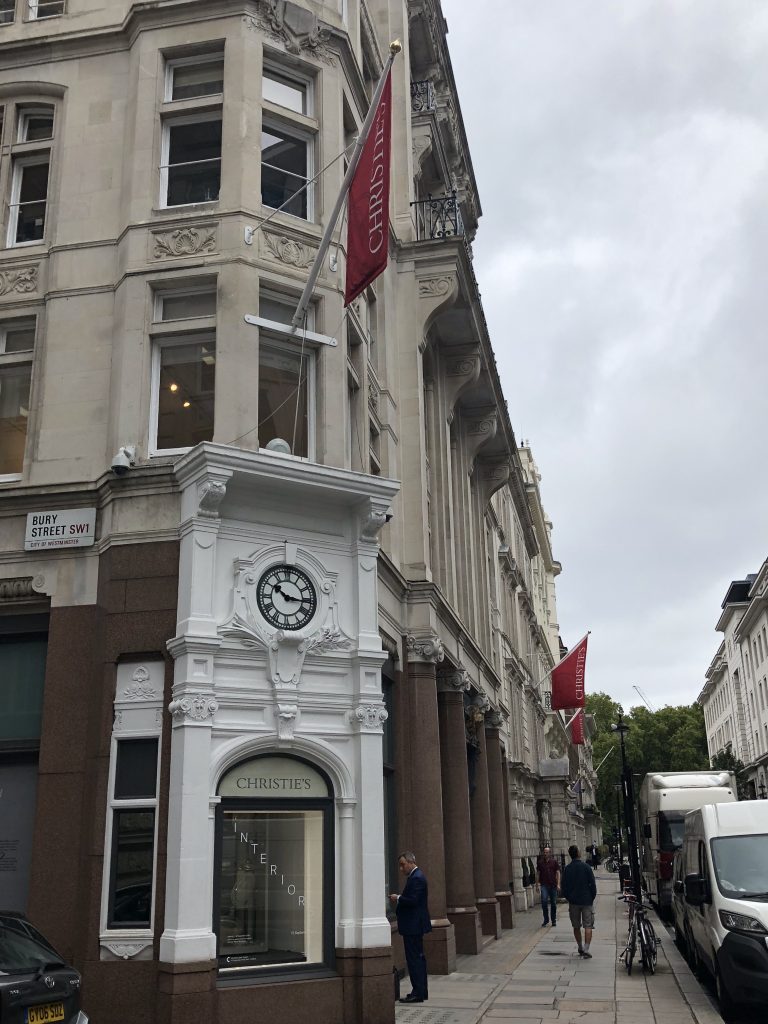 Throughout the two days, several panel discussions – most moderated by watch journalists, or bloggers – brought together independent watch brands, watchmakers, brand CEO’s and leading executives from Christie’s, as well as from Ahmed Seddiqi & Sons, organizers of Dubai Watch Week – dedicated to the preservation of the watchmaking culture.

Among the standout discussions at the event: a panel entitled “When David Clocks Goliath.”  Speaking on it were Edouard Meylan, CEO of H. Moser et Cie, Gregory Dourde, CEO of HYT, and Stephen Forsey of Greubel Forsey. It was moderated by my colleague and long-time friend Jack Forster of Hodinkee. “The discussion revolved around the concept of how independent watch brands can survive and even thrive in the watch world where big groups and conglomerates can invest so much time and money into building their brands through product and marketing. 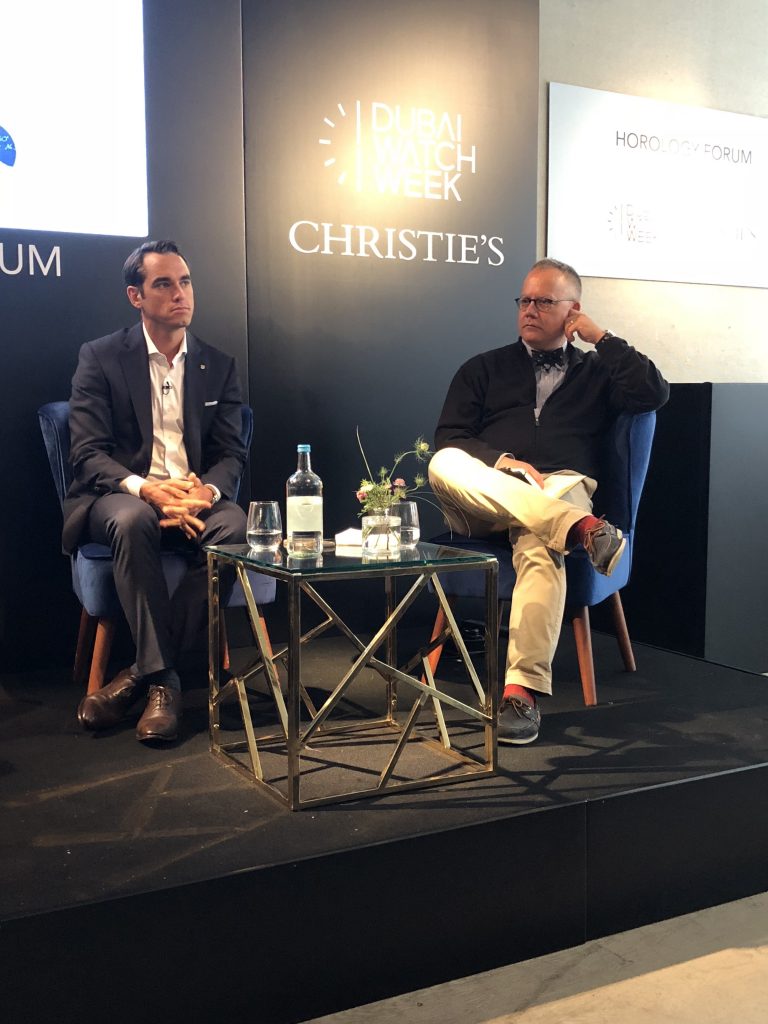 “Luxury has a sort of bad connotation when it is taken out of context. If you look at just a number, there can be sticker shock, without knowing the work that is behind it,” says Stephen Forsey. “So building a brand today is more about authenticity, is more about building DNA and having a story and message to tell.” According to Forsey, he doesn’t want Greubel Forsey to be categorized as a brand, “We want to be known for the substance behind it.

Similarly, Edouard Meylan says that in a world with more than 350 Swiss watch brands and an over-saturated market, the independent brands “Have to create an image. The company needs to contribute more than just product. For us the idea is to promote our message in a disruptive way. We create our own language with humor, provocation and things that maybe are not traditional.”

In fact, his brand, H. Moser & Cie, is known – among other things — for creating the Swiss Mad watch – made using Swiss cheese from a Swiss cow. The watch was a symbol of the brand’s reaction to the “Swiss Made” label, which requires just 60 percent of a watch’s components to be of Swiss origin in order to call the watch Swiss Made. H. Moser & Cie. creates watches that are more than 95 percent Swiss. In reaction to the leniency of the Swiss Made guidelines, the brand unveiled the Swiss Mad watch whose case is created from real Swiss cheese in an innovative composite material. The brand also has removed the Swiss Made label from all of its watches created since 2017. 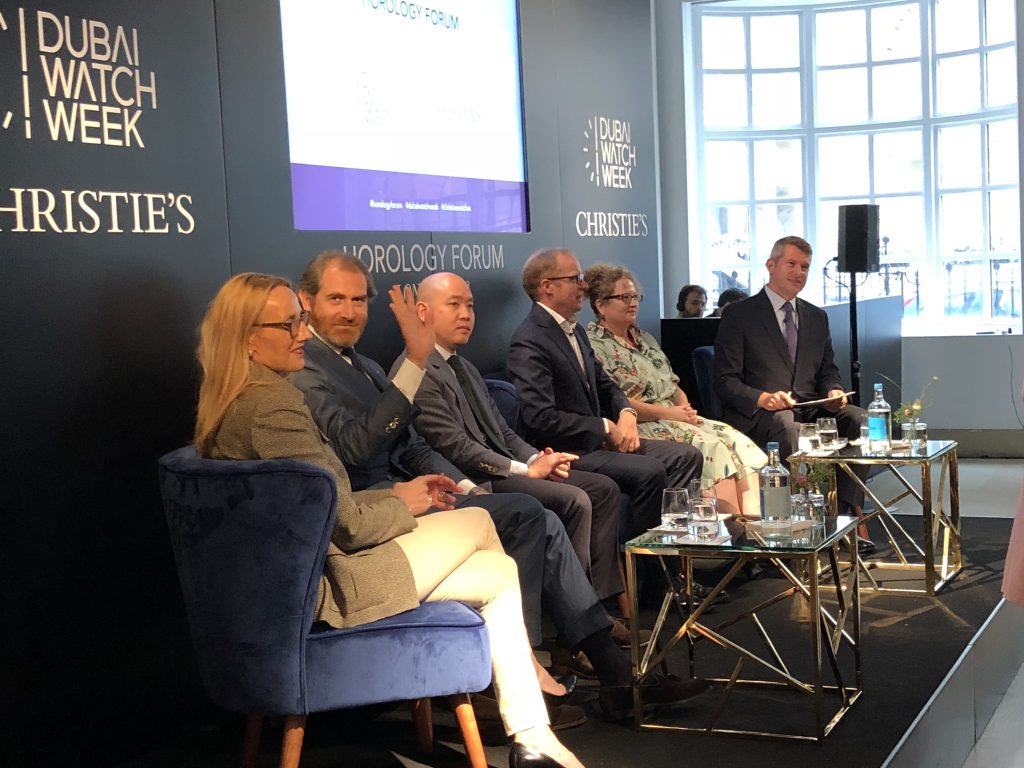 Later in the Dubai Watch Week forums, there was a review of two watch geniuses (both of whom died just over half a decade ago) – watchmaker George Daniels and famed designer Gerald Genta. Moderated by Christie’s’ John Reardon, the topic covered the concept of how design and watchmaking technology work hand-in-hand sometimes, and other times, one aspect dictates the other. The discussion was meant to gain keener insight into each of these two highly renowned men. I personally had the good fortune of knowing both of them. While George Daniels was always very informative, and sharing of his knowledge with me, he was also always very precise and to the point. Conversely, in all of my wonderful meetings with Gerald Genta over the years, he was incredibly enthusiastic and always excited to share his newest ideas and designs.  While Daniels worked on escapements and movements and the technical side, Genta approached watches from a design and artistic corner. The panel discussion included top watch designer for Bulgari, Fabrizio Buonamassa, author Stacy Perman,  The Hour Glass’s Michael Tay, watchmaker Roger Smith who worked with Daniels for years, and Moritz Grossmann founder Christine Hutter.

British watchmaking was also explored in another panel discussion moderated by noted economist, Dr. Andrew Hildreth. Historically speaking, England was once one of the most important watchmaking countries in the world. Its finest watchmakers were deeply involved in and committed to developing chronometers that could conquer the issues of precision and determining longitude at sea. While the British watchmaking industry somewhat disappeared in the 20th century, today we are witnessing a small rebirth of small independent brands such as Roger Smith, and of those, such as Bremont, making a bigger mark in industrializing British watchmaking. 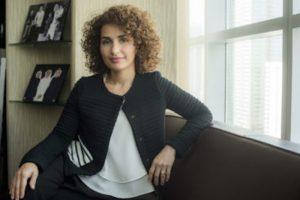 “London is an important horological market that has a rich heritage in the industry,” says Melika Yazdjerdi, Director of Dubai Watch Week, pointing out that exploring British watchmaking heritage and current status makes sense given that the event is held in England, at the Christie’s headquarters. Yazdjerdi further announced that the Dubai Watch Week will once again take place in November 2019 in Dubai, with exact dates and program to be announced later in the year.”