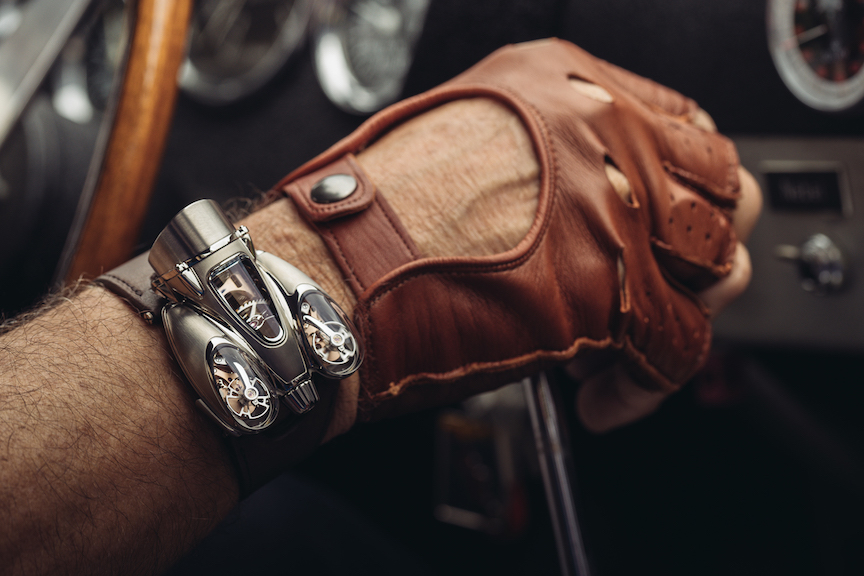 Today, MB&F unveils the Horological Machine No. 9, nicknamed Flow. Built in two limited edition titanium versions, the horological machine, like all of MB&F’s space age, three-dimensional works of art — does not disappoint. The big question, though, is did MB&F go a bit too far in the design of Flow? 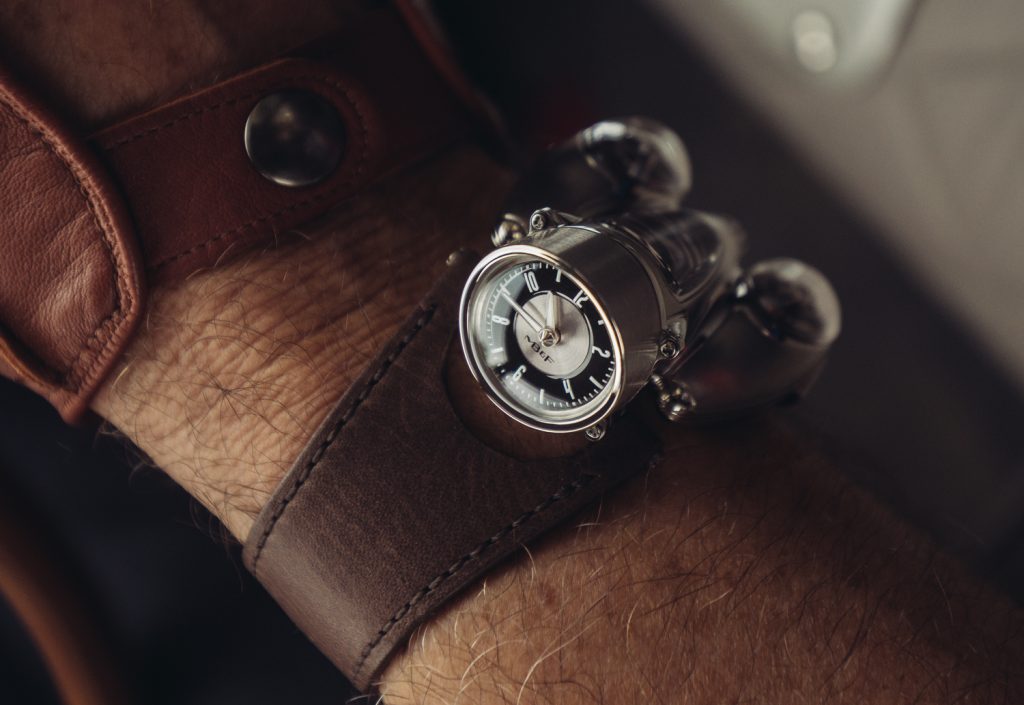 MB&F Horological Machine No. 9, Flow, Road version on the wrist

The answer is, of course, no. MB&F did not go too far at all. For those who know Max Busser as I do, you know that his dream in watchmaking is to create time as art — as a mechanical sculpture that brings his childhood love of automobiles and aviation to new heights perhaps never imagined before. As a child, Busser’s original dream was to design cars. For a host of reasons, that option did not become reality, but that didn’t stop Busser from bringing his ideas to fruition in serious visionary timepieces that are MB&F horological machines. 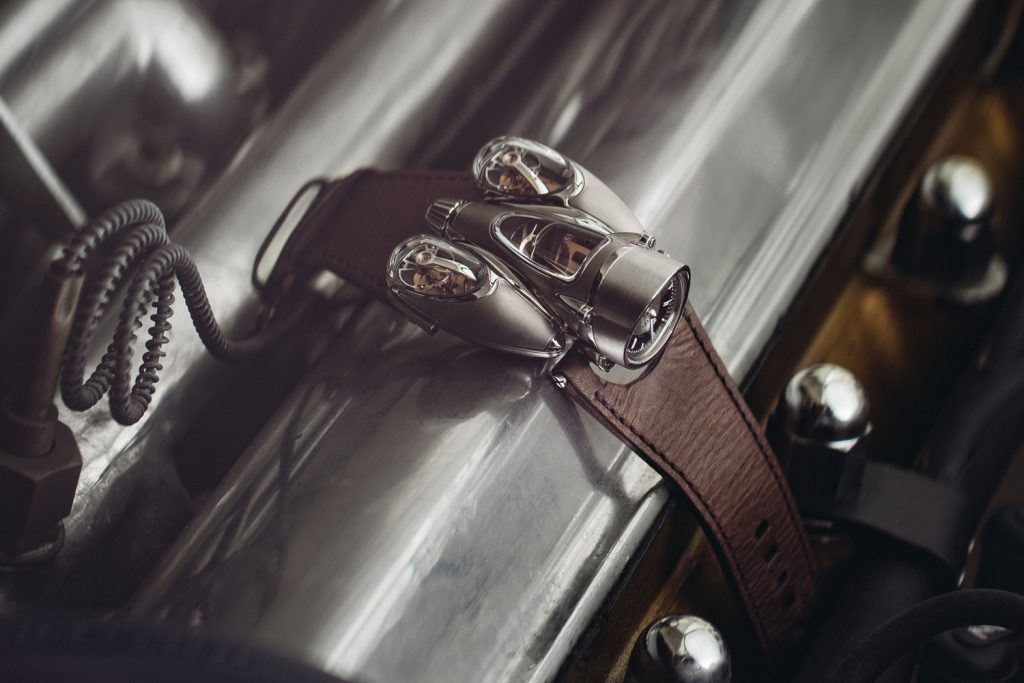 Given past MB&F performance, the watch world expected HM 9 to be incredibly complex, and this watch – Flow – is a deft blend of intrigue, intricate invention, multiplex complexity and top-notch Swiss craftsmanship. Did we expect any less from this young (MB&F was founded in 2005) yet highly successful independent watch brand? Taking four years from concept to fruition, and three years in R&D, HM9 is guaranteed to be a coveted collector’s piece. 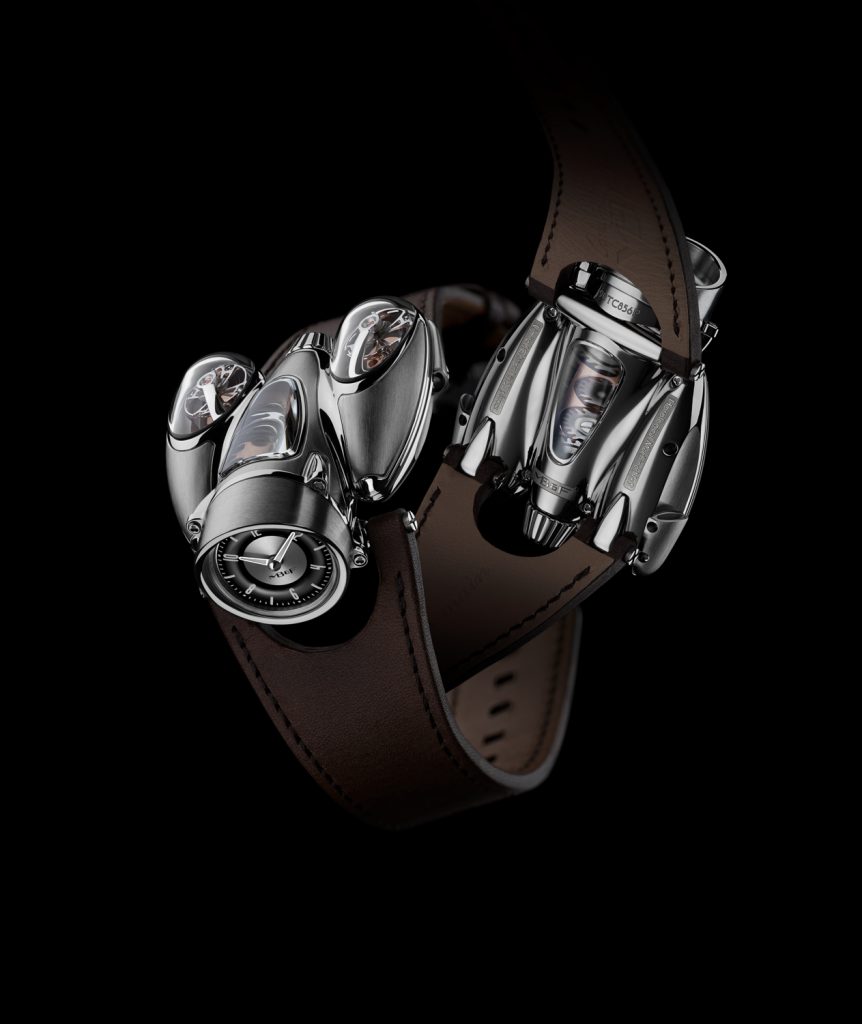 While MB&F press materials state that the aerodynamic HM9 is inspired by the profiles of aircraft and automobiles of the mid-20th century, true MB&F fans will see that dramatic look, as well as a bit of a hark back to the brand’s beloved Thunderbolt machine. In fact, Flow boasts a very intriguing case shape with sharp angles, generous curves and juxtaposed conical shapes. Created in a driver-style design, with hours/minutes dial on the side of the watch, the HM9 features a large center cone with curved sapphire crystal through which one can view the planetary differential engine of the watch. On either side of the center cone are reversed shape cones with sapphire crystals revealing the twin balance wheels of the all-new in-house-made manual-wind movement. 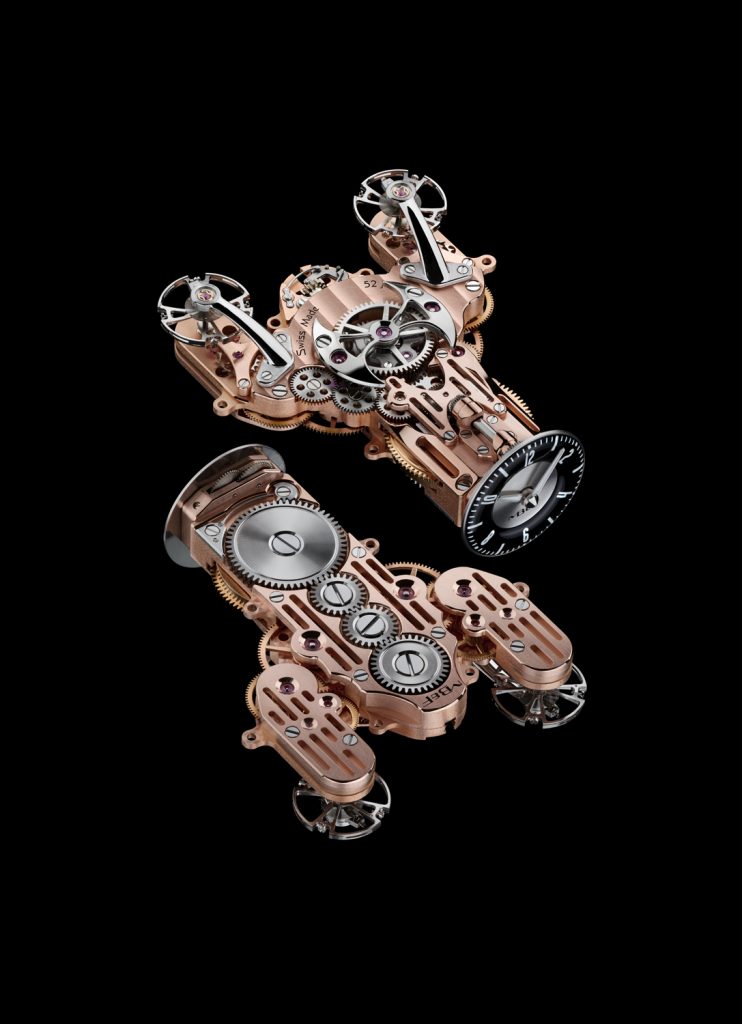 So complex is this new case of the HM 9 that MB&F’s manufacturing partners said it could not be done. Not taking “no” for an answer, MB&F persevered, eventually creating new technology for machining and milling the ingenious and dramatic HM9. The satin- and polished finished case boasts height differentials of as much as 10mm in certain portions. Additionally, because the HM9 is so complex, MB&F had to develop a special three-dimensional gasket to ensure its water resistance. Even that patented gasket was in the development stages for a very long time. 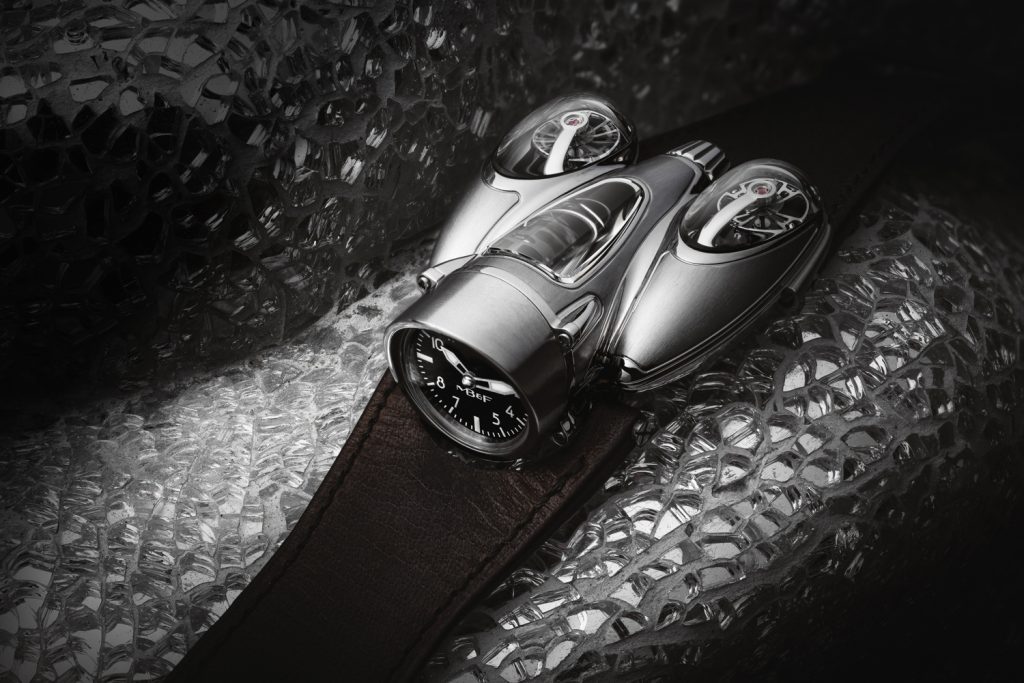 As mentioned, the HM9 movement was three years in the development stages and was created entirely in house. The movement features a double-balance with differential, similar to the system in the Legacy Machine N0. 2. However, in HM9, the two balances are individually impulse and separated so that they beat at their own cadences of 2.hHZ each to achieve two sets of chronometric data that is then translated by the differential to produce an average steady, stable reading. 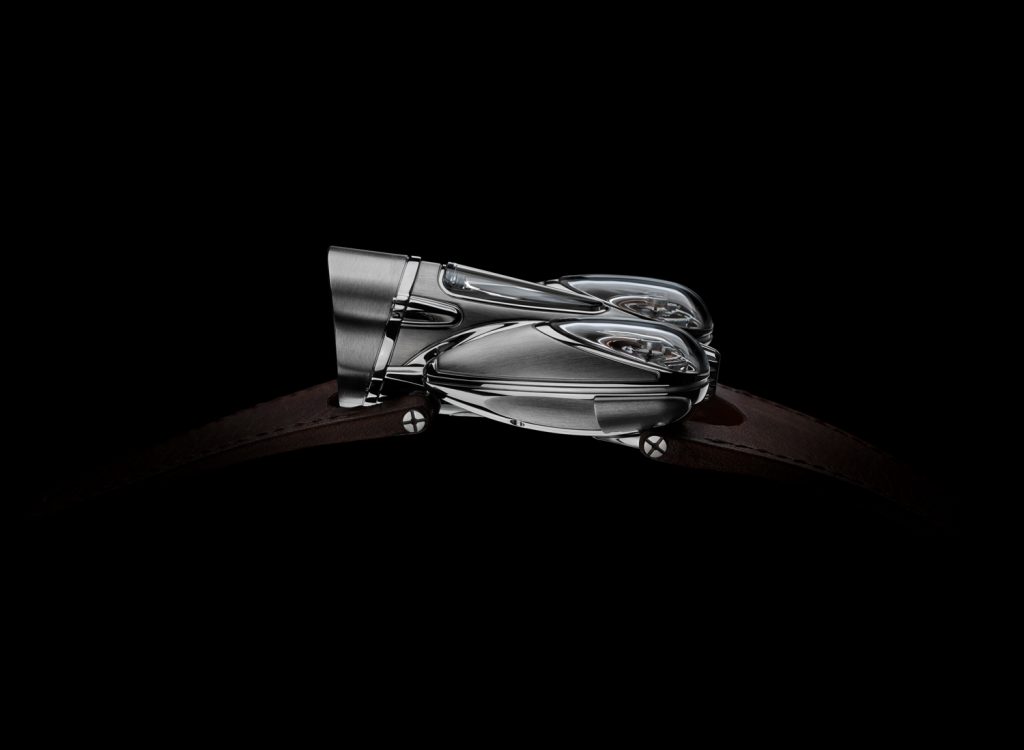 MB&F is creating two versions of the HM9, Flow, machine – both in titanium. The difference between the two is the dial and movement colors. The Air edition has a dark movement and aviator dial. The Road version has a rose-gold-plated movement and speedometer dial. Each HM9 is built in a limited edition of 33 pieces, retailing for $182,000. 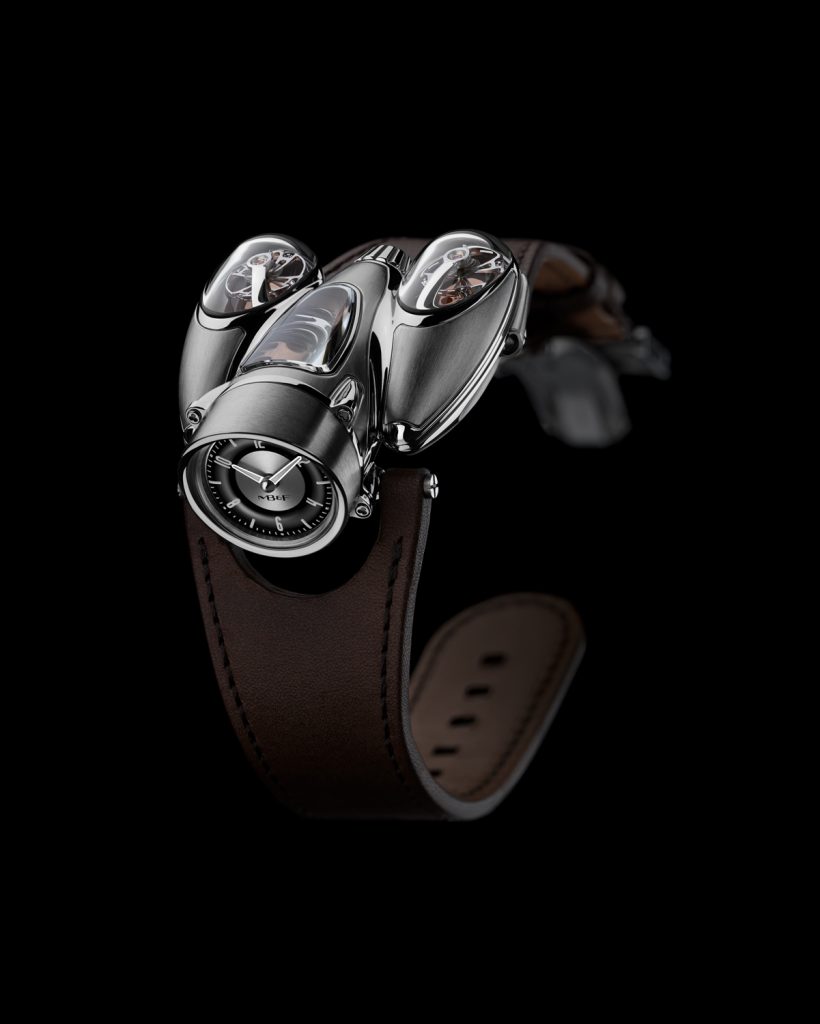