How Mother-of-Pearl Dials are Made 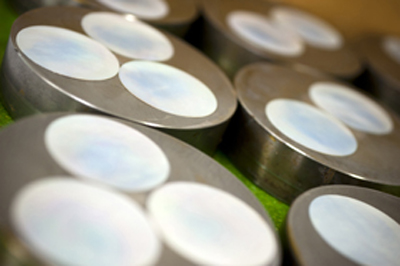 Sowind Mother of pearl dial disks being readied for work.photograph by “picture : patriceschreyer.com”.

Many brands today use mother of pearl for dials on both women’s and men’s watches. Shimmering and intriguing, mother of pearl is not an easy substance to work with. It is quite brittle and ultra thin when used as a dial and breakage can easily occur. Depending on the complexity of the dial, the entire production process involves 15 different artisan steps and takes between four and six weeks. A company such as GT Cadran, with 20 specialized dial makers, can only produce about 5,000 mother-of-pearl dials annually. Here, we show eight elaborate steps in the making of natural mother-of-pearl dials. 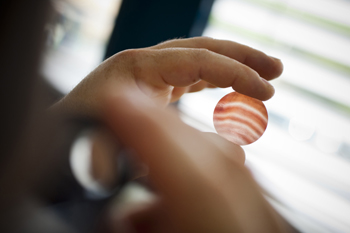 Shell selection plays a role, especially at the very high end of the watchmaking spectrum. Top-quality shells come in extra-white colors and often are from Australia. Though shells also hail from other parts of the world. To make the thin mother-of-pearl dials, thick discs are cut from the shell. These thick discs are then thinned out and polished using a series of wheels to achieve the desired thinness.  In the end, the dials are precisely machined into thin layers that are typically 0.2mm. From these thin sheets of mother of pearl, CNC machines cut perfect round orbs or specifically shaped pieces that will serve as the dial for certain watches. 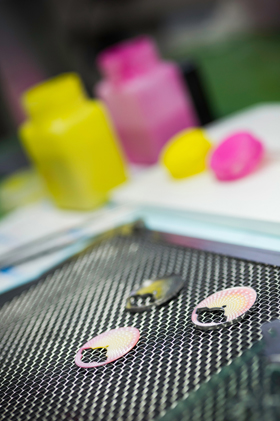 Applying color to the dial back of a Girard-Perregaux dial. photograph by “picture : patriceschreyer.com”.

Due to machining capabilities, many dial makers buy the disks already cut and start the work from there.  From this point forward, mother-of-pearl dials are largely hand crafted. Each dial orb is carefully inspected. Mother-of-pearl dials can be engraved or finished with all sorts of patterns from traditional sunray to decorative motifs. This is all delicately done by hand on either the dial front or back depending on the design.

Dials can be enhanced in color by painting, varnishing or lacquering the back of the mother of pearl. Generally, mother of pearl has a milky white luster, however it can be found with a natural pearlescent hue in pale blue, pink, gray and brown. 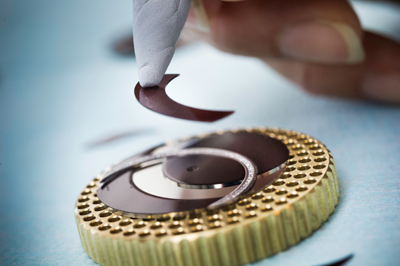 Inlaying of mother of pearl and gold for marquetry dials. photograph by “picture : patriceschreyer.com”.

Polishing is an important step, as it brings out the natural luster of the shell.Generally, numerals and markers are then inked onto the dial, or cut-outs are made on the dial for the setting of gemstones or applied indices. Further embellishments are then set into place, such as diamonds, gemstones or ribbons of gold and the hands are added.