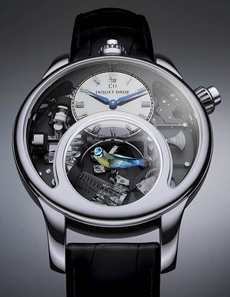 Jaquet Droz has long been known for its mastery of automatons – moving figures on a timepiece. This year, though, the brand takes the concept to new heights in the form of the multi-dimensional Charming Bird – the first singing bird automata wrist watch in the world.

The revolutionary watch was first unveiled at BaselWorld a few months ago, but it is just beginning to released. The ground-breaking technology for this 3-D 47mmtimepiece—for which a patent has been filed – operates  via a system of piston-driven bellows that enable the complete feathered bird to turn, flap its 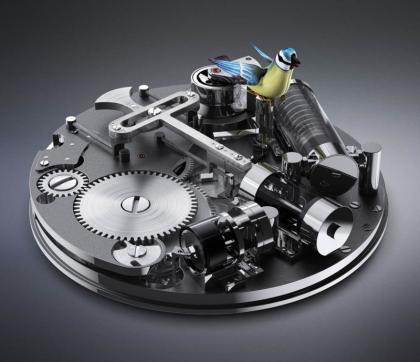 wings and move its head. The complex system of the watch’s geartrain, bridges and plate are visible via a sapphire dial and dome (under which the bird stands perched). Just 28 pieces of The Charming Bird will be made over the course of the coming years, each retailing for approximately $500,000. Watch this intriguing video of The Charming Bird.