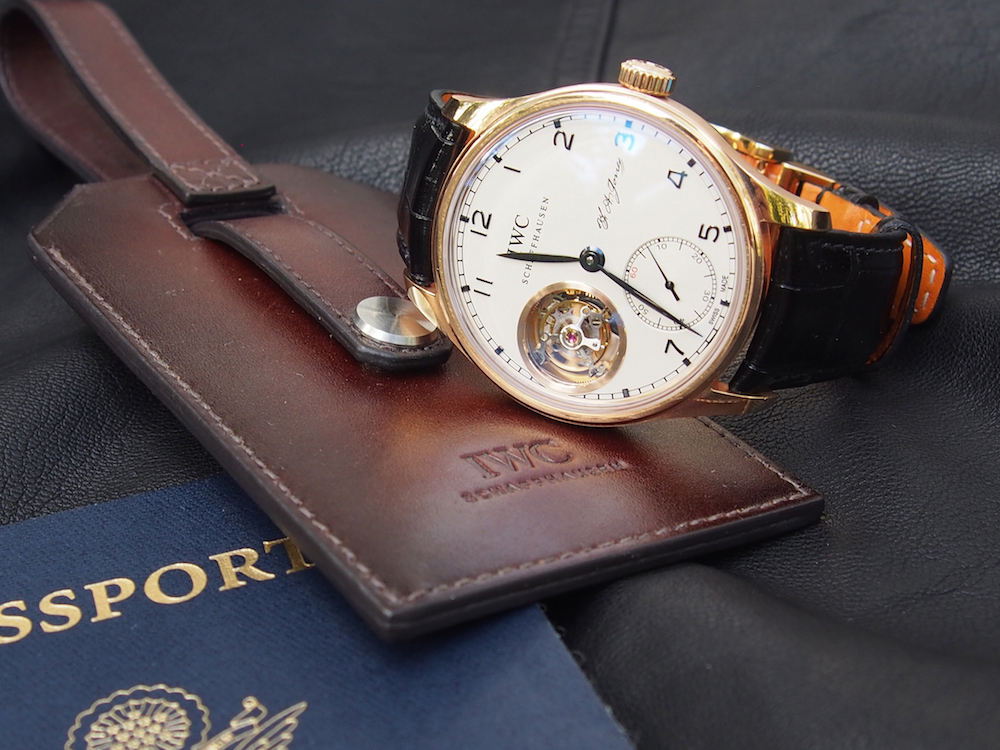 Yes, the new watch from IWC is a mouthful. The Portugieser Tourbillon Hand-Wound “D.H. Craig US” Watch – unveiled today — is also an eyeful and a storyful. Well, “storyful” is not really a word, but in this case, it works. The beautiful watch pays homage to Florentine Ariosto Jones – the American founder of the now-famed Swiss brand. Today is the centennial of his death in 1916 – nearly 50 years after he founded The International Watch Company in Schaffhausen Switzerland in 1868.

The watch though has so many different elements poured into it that it warrants a bit of a history lesson. Back in 1868, when the then 27-year-old Jones — who had been a watchmaker since the young age of 16 – left America to start his own watch brand in Switzerland, he could not have known he was creating a company that would last for generations to come. 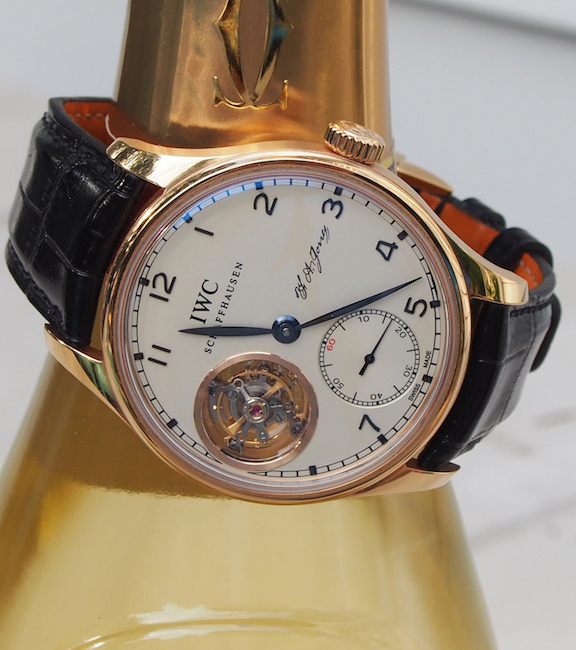 The watch is a USA exclusive and features the signature of the founder, Ferdinand Ariosto Jones. (Photo: R. Naas)

Jones’ initial decision to bring American industrialization technology to Switzerland was a simple choice. The Swiss labor was less expensive than American labor and he was sure eh could create pocket watch movements there less expensively than he could in Boston where he had been living. With the blessing of – and some financial help from –his uncle, Daniel Hastings Craig, he set out to prove his point. After traveling around Switzerland for a bit, he settled on Schaffhausen in the German-speaking region of the country as his home location for The International Watch Company. There he could harness the power of the Rhine River for electricity for the manufacture.

When he created his first movement, not too long after establishing IWC, the Jones 2N Pattern H Caliber was engraved with the name D.H. Craig, in honor of the highly successful businessman who was his mentor. (Craig, as it turns out, was very involved in the news business and actually received so many stories via wire from Europe that he helped build the New York Associated Press (now Associated Press) into the legendary news conglomerate it is today.) 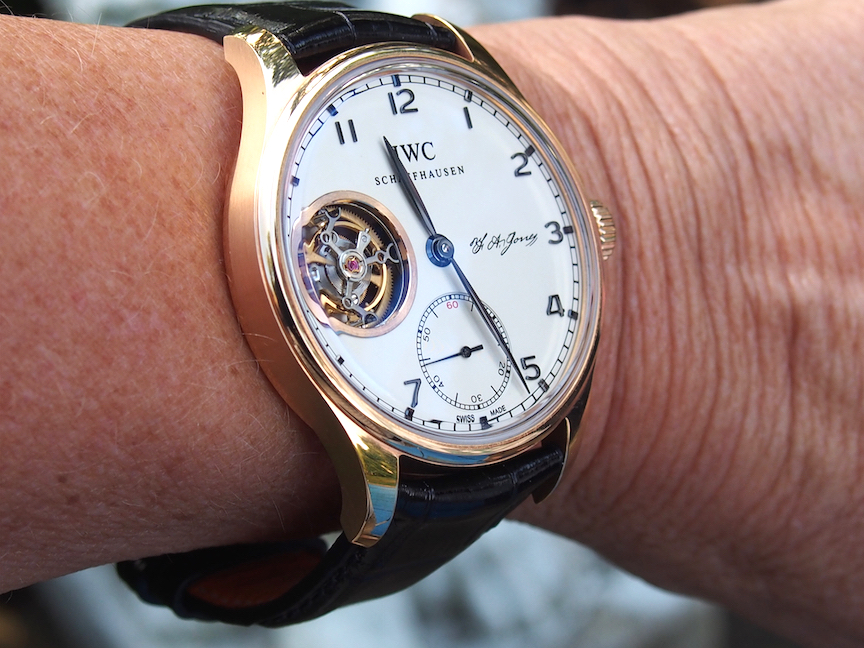 The tourbillon escapement is at 9:00 and the watch is beautifully balanced. (photo: R.Naas)

The meaning behind the D.H. Craig name on the movement was somewhat lost in history, but recently, historians were able to find the link – and, as such, IWC opted to put the D. H. Craig inscription on the new watch that honors the brand’s American heritage.

The new timepiece – which retails for $57,000 – is created in the Portugieser case – as it is the brand’s largest case and the one that can best emulate the pocket watch looks of Jones’ day. Created in 5N 18-karat rose gold, the new 43mm watch is being built in a limited edition of just 27 pieces (Jones’ age when he founded the brand). The silver plated dial carries the signature of F.A. Jones in full beauty at 3:00. The tourbillon escapement is opposite it at 9:00. The IWC hand-wound 98900 caliber powers the timepiece. It beats at 4Hz and supplies 54 hours of power reserve. 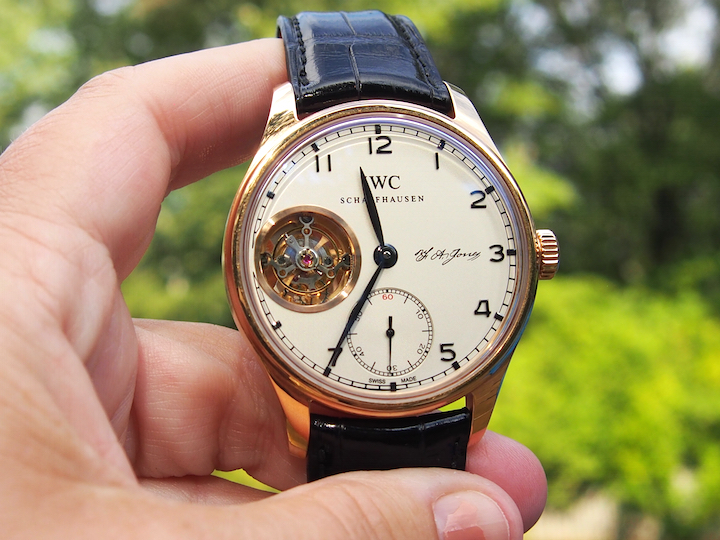 In fact, all of the complex Portugieser models (with a tourbillon or minute repeater) are powered by movements in the IWC 98000 caliber family. The precursor of these movements is the 98 caliber, which was first designed in the 1930s for use in hunter pocket watches and has been continuously developed ever since.

To celebrate the world of travel, including Jones’ voyage to Switzerland to found the company (which he left less than a decade later), IWC is selling the watch with a Santoni hand-made strap and accompanying numbered Santoni passport holder.

Additionally, the brand is partnering with the “Save America’s Clocks organization to help restore a New York city street clock made E. Howard Watch & Clock Company – where Jones worked before heading to Switzerland. The new watches will be sold exclusively in the US market in IWC boutiques. 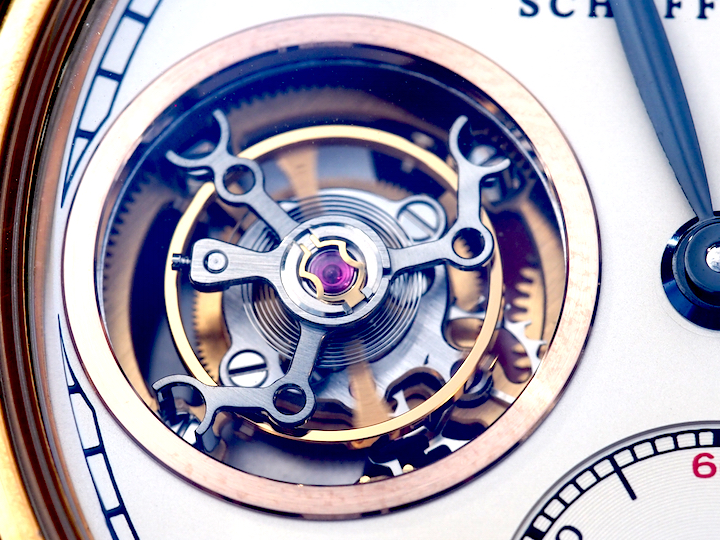 The watch features a one-minute tourbillon.

Today, in Switzerland, IWC has grown in size and scope. The brand has an international reputation for its innovative timepieces and top-quality craftsmanship. With more than 1,000 employees around the world, and 120 watchmakers, the brand continues to build watches of distinction.

In addition to the much-loved Portugieser line, IWC’s collections include Pilots watches, Ingenieur, Aquatimer, Portofino and DaVinci. The brand also spreads its wings to partnerships with Mercedes AMG PETRONAS Formula One(TM) Team, Filmmakers Dinners and Awards, and more. It is also highly committed to the environment on a corporate and grassroots level. IWC supports the Laureus Sport for Good Foundation, which works for physically and socially handicapped children and young people worldwide, and — in the interests of ecological sustainability — works with the Charles Darwin Foundation.

The new timepiece represents a homage to the founder who, although he returned to the United States and discontinued his work in the watch world, built the strong foundation of the brand. In fact, IWC has created mini museums in its New York and Los Angeles boutiques that commemorate the company’s history in a special exhibition of photos and documents, as well as showcasing rare pocket watches with Jones’ calibers. Each of the 27 watches will be sold with a copy of the book “F. A. Jones – His Life, Legacy and Watches.” This contains contributions by David Seyffer, director of the IWC museum, among others. The volume details the life of Florentine Ariosto Jones, the calibers he developed, and the history of IWC from its founding to the present day. 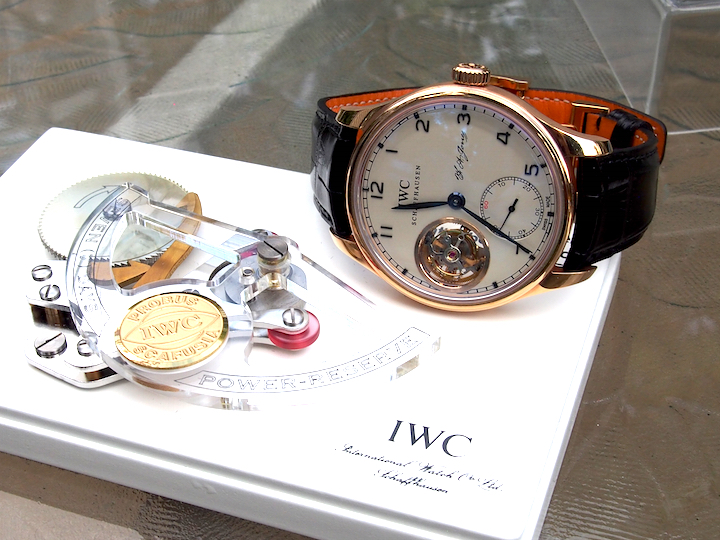