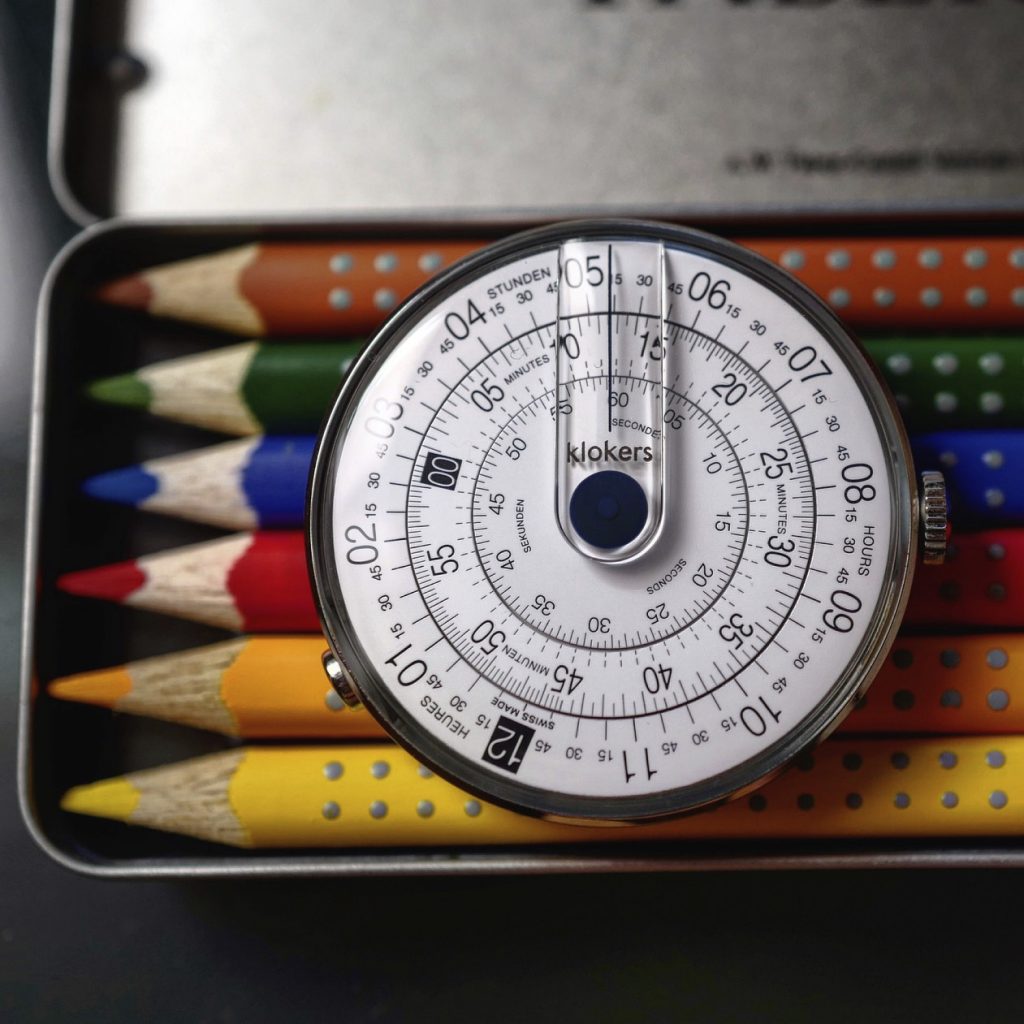 The Klok-01 watch head is offered in a host of different color combinations. Photo: Simon Cudd.

I discovered the Klokers brand earlier this year, after noticing their kickstarter campaign and having a chat with Richard Piras, CEO and Co-founder, on messenger. I have known Richard a few years, and he brought it to my attention. The kickstarter campaign went viral on 15th September 2015 and reached 100% goal in 8 minutes. Exactly 1,563 backers pledged €605,898 to help bring this project to life.

For those of you unfamiliar with Kickstarter, it’s a crowd-funding platform where individuals pledge an amount of money to a brand so they can create their product. In return, the individual has the right to own that product at an early stage for a special price, before it goes mainstream to the public consumer. (Other forms of crowd-funding deals also exist).  Klokers raised the money, it seems, with ease. 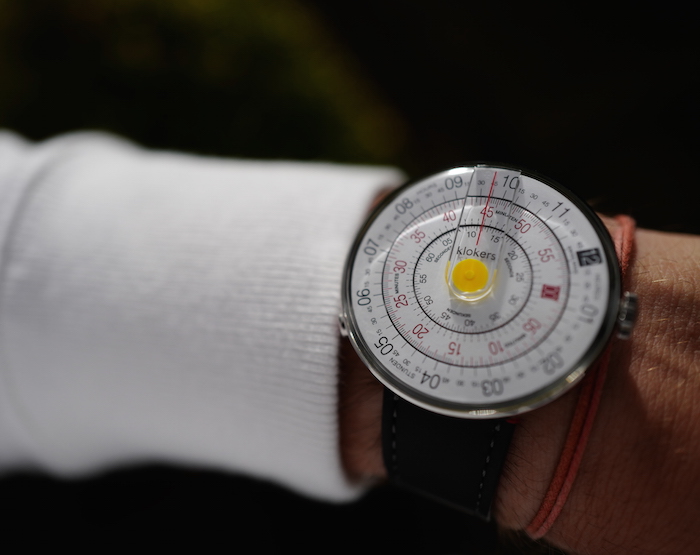 The Klok-01 is devoid of hands — and uses three disks to display the time. (Photo: Simon Cudd)

That may be because  the brand, and the KLOK-01 in particular  is a really cool watch, as I discovered for myself finally when I met with the KLOKERS team at Baselworld this year.

The Klok-01 watch is inspired by the slide rule, invented in 1622 by Rev. William Oughtred, as a symbol of technical intelligence. The 44 mm circular “watch head” is made from a metal polymer, housing a Soprod (SOP 610 Quartz) or Ronda  movement. Instead of conventional hands, the watch features three separate discs that rotate:  One each for the hours, minutes and seconds. Time is easily read through a vertical window at 12:00. The system, which seems strange at first,  doesn’t take long to adjust to. 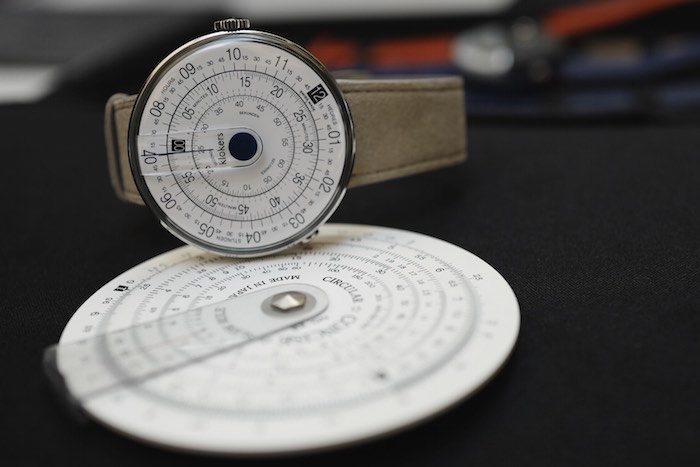 The design of the Klok-01 is inspired by the slide rule. (Photo: Simon Cudd)

The overall feel of the watch is great, a perfect little package, quirkily wrapped up and delivering “TIME” in a fun and inexpensive way that truly looks different. Even though it is a quartz movement, not that I’m a watch snob in any way, I love the aesthetic, styling and the general look of a watch, over what makes it tick, or sweep.

Easily the coolest thing about the watch, though,  aside from its general appearance, has nothing to do with the telling of time, but in the way you can wear the watch. The watch head, which on a conventional watch, one would call the case,  is  designed with a patented system — allowing you to unclip the watch from the strap with the push of a button at 7:00. This allows the wearer to change straps, literally at the click of a button,  and for someone who loves straps and the frequent changing of them, this is the ideal solution. 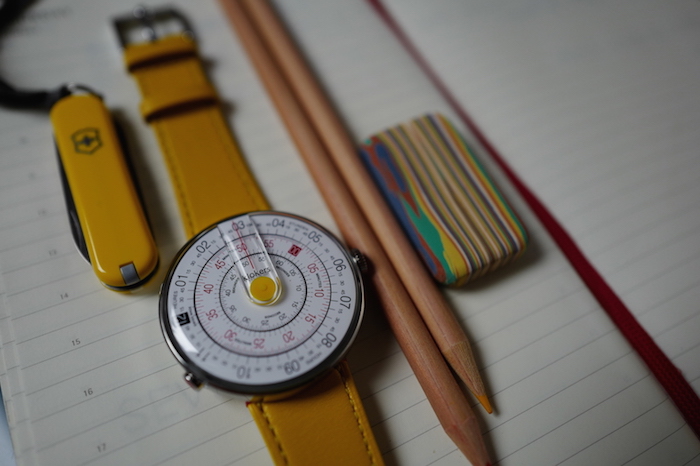 I have all of the color variants of the (single conventional) straps, KLINK-01, which are a variation of Italian leather or suede in bright orange and yellow, or more sombre blue, blacks and chocolate brown. There is also the double wrap KLINK-02 straps, which are better suited to the female wrist, than mine.

Klokers is a unique new perspective on  telling time, billing themselves as  machines to travel through time  and referring to Kloker followers as  Time Travelers — a lot more sophisticated than Klokeristis. The watch is really reasonably priced starting at $450. for the KLOK-01, which includes a KLINK-01 single strap (in a choice of seven color variants) in Italian leather and two in suede.

Klokers will be present at the Worn & Wound New York Pop-up show this Friday, October 21: Wind Up New York — if you want to time travel right over there for a first hand look at the wildly different Klock-01. 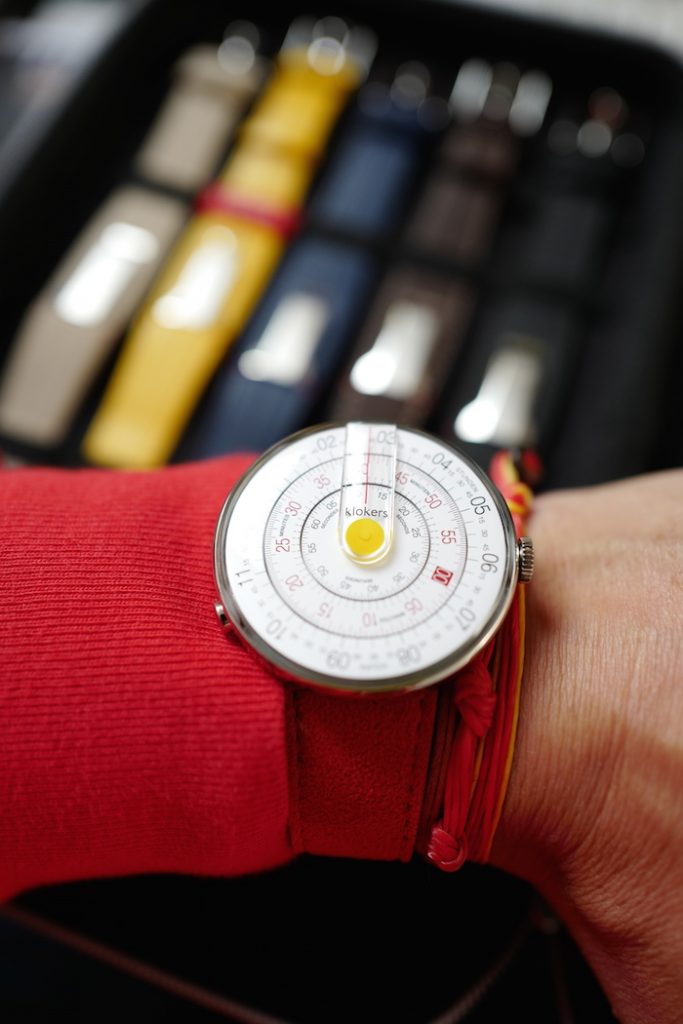 You can personalize your Klok-01, which is sold with a variety of strap choices. Photo: Simon Cudd

CASING
-The klokers Key: a pushbutton at 8 o’clock to unlock the watch head from its base

-Waterproof, down to 5 m

Two-year warranty against all production defects