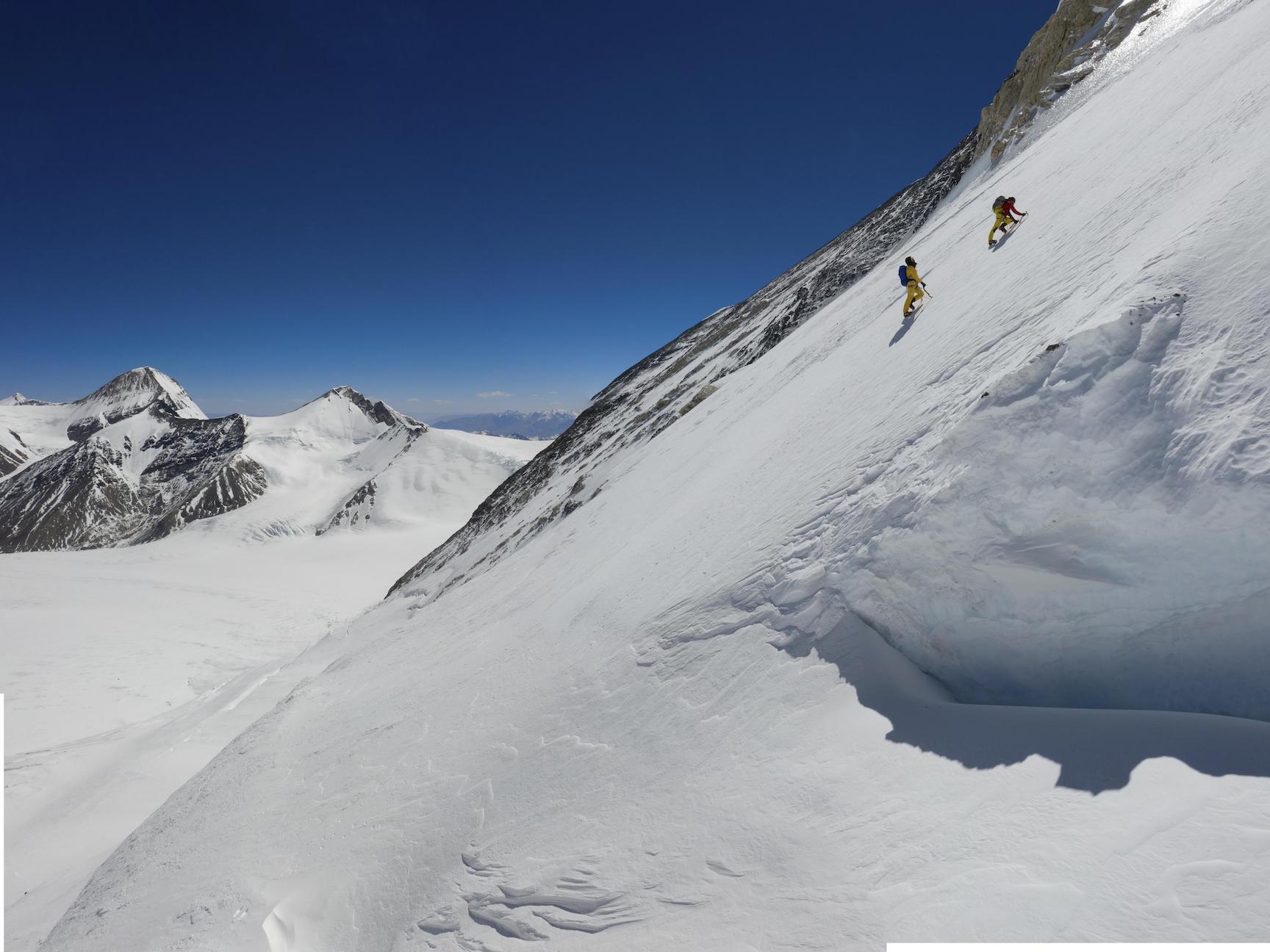 With its “One of Not Many” marketing campaign, Vacheron Constantin has been making some intriguing partnerships — and headlines.  One of its partners, Cory Richards, is a a National Geographic photographer and avid explorer who recently attempted to climb Mt. Everest unassisted, without oxygen and on an all-new route.  Exemplifying the brand’s   “One of Not Many” concept, Richards was recently in New York as a motivational speaker to talk about his experiences.  He  has made it to the summit of  Everest twice before,  but this most recent trip was on a different trail along the North-East ridge in Tibet deemed to be the toughest and most challenging path. He traveled only with climbing partner Esteban “Topo” Mena, and wore a Vacheron Constantin prototype Dual Time watch made expressly for him — taking into consideration the high altitudes, freezing temperatures and other influences he would endure. 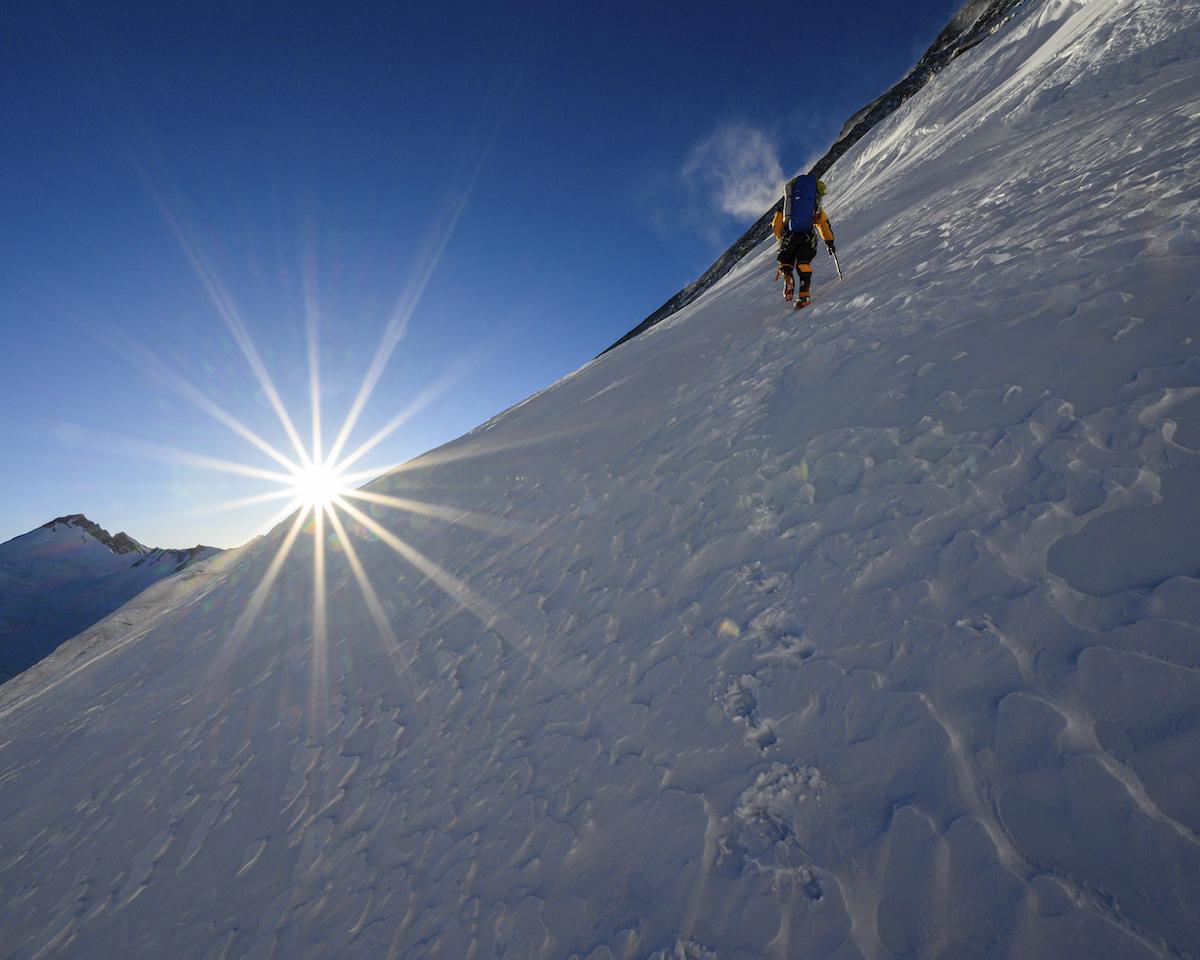 Recently, I wrote about his adventures in my column on Forbes.com. Here, I recap some of that article.

“Richards — who also miraculously previously survived an avalanche (changing his life forever) — had prepared for this trek for more than year. The plan was to push right through after leaving their small base camp (at 4,000 meters and where they had spent a month acclimatizing) until reaching the summit (stopping only at night) — with no other camps along the way, since there are none on this route. The dangerous route would subject Richards and Topomena to different ultra-thin atmospheric pressures, thermal shocks (with temperature possibilities reaching  as low as more than 100 degrees below Fahrenheit, and more as he struggled to reach the peak at 8,000 meters (26,247 feet).

“In my life, I had gone down a very dark path; my career had exploded but my personal life had completely unraveled. I’d  lost everything: my friends, my marriage, my self respect,” says Richards. “The mountains have always been the place I go to understand who I am, to uncover truths that I hold valuable.”

Passionate about this climb, and truly convinced he was going to make it to the top, Richards and Esteban left base camp and climbed for 12 hours on the first day before being forced to stop. Without tents or a camp, they endured the night but could not sleep due to the frigid temperatures. In the morning, they pushed on despite exhaustion. However, three hours into it — at an incredible height of  7,600 meters (24,934 feet) — they made the difficult decision to turn around. They were scaling a thin blue ice on a basically vertical climb and the weather was making the ascent impossible. 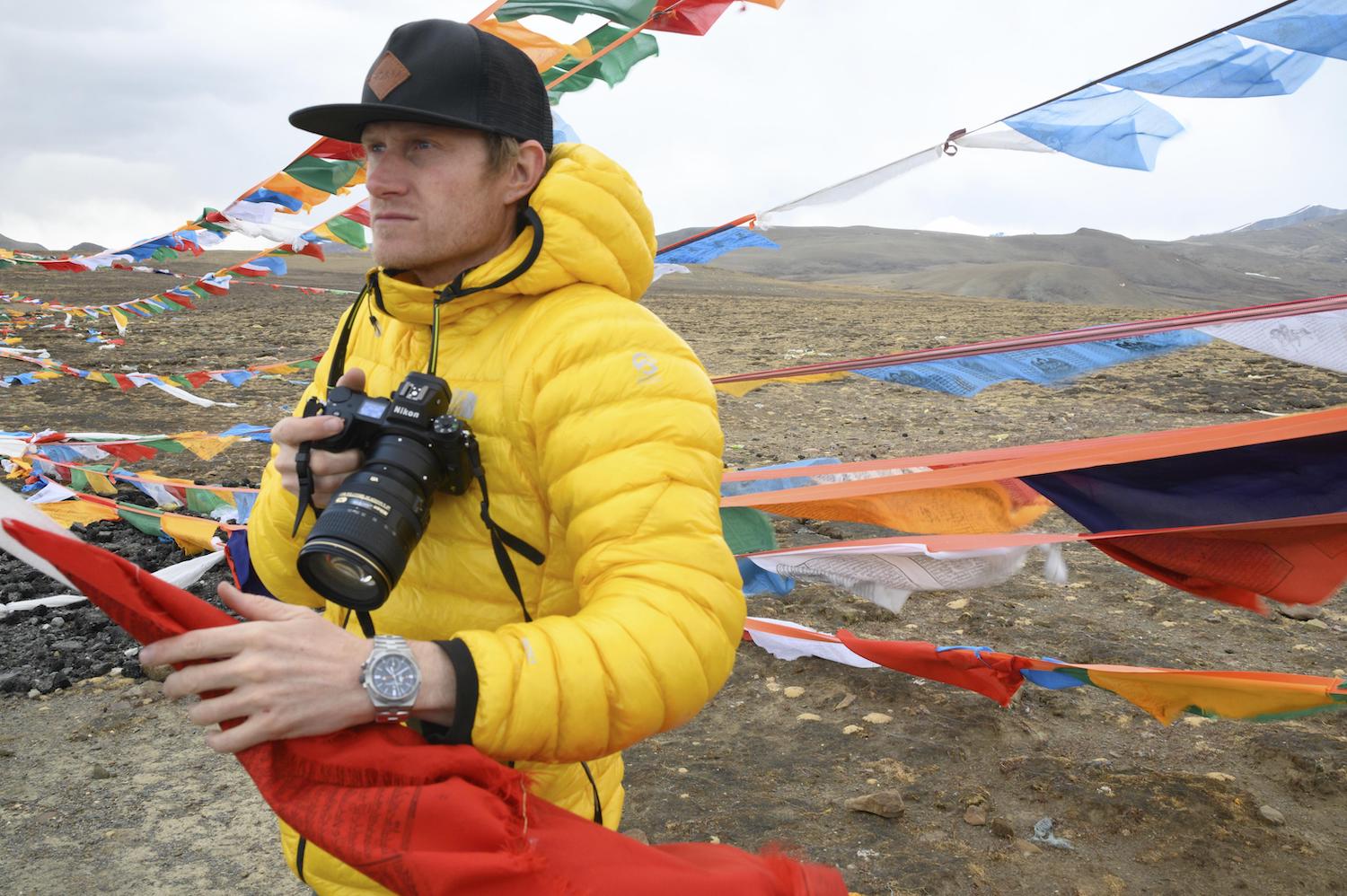 Cory Richards Everest climb 2019. In addition to being a mountain climber and adventurer, Richards is a National Geographic photographer and a Vacheron Constantin “One of Not Many” ambassador.

“In the strictest sense of the word, our climb was a failure. But it wasn’t. We didn’t die and that is a huge success. I look at it as an opportunity to learn,” said Richards during a private interview, noting that he has every intention of returning to complete that route and that climb next year.  “Failure is really a means to success. You have to fail as many times as it takes before you get it right, because that is ultimately what defines perfection.”

To support Richards’ efforts, Vacheron Constantin worked with him to develop a prototype watch that could go the distance with him. This meant creating a watch where the temperature would not affect the lubricant inside, where the crystal would not shatter and the luminescence would not be affected. Working with the brand’s Overseas collection as a jumping point, Richards opted for a Dual Time watch. 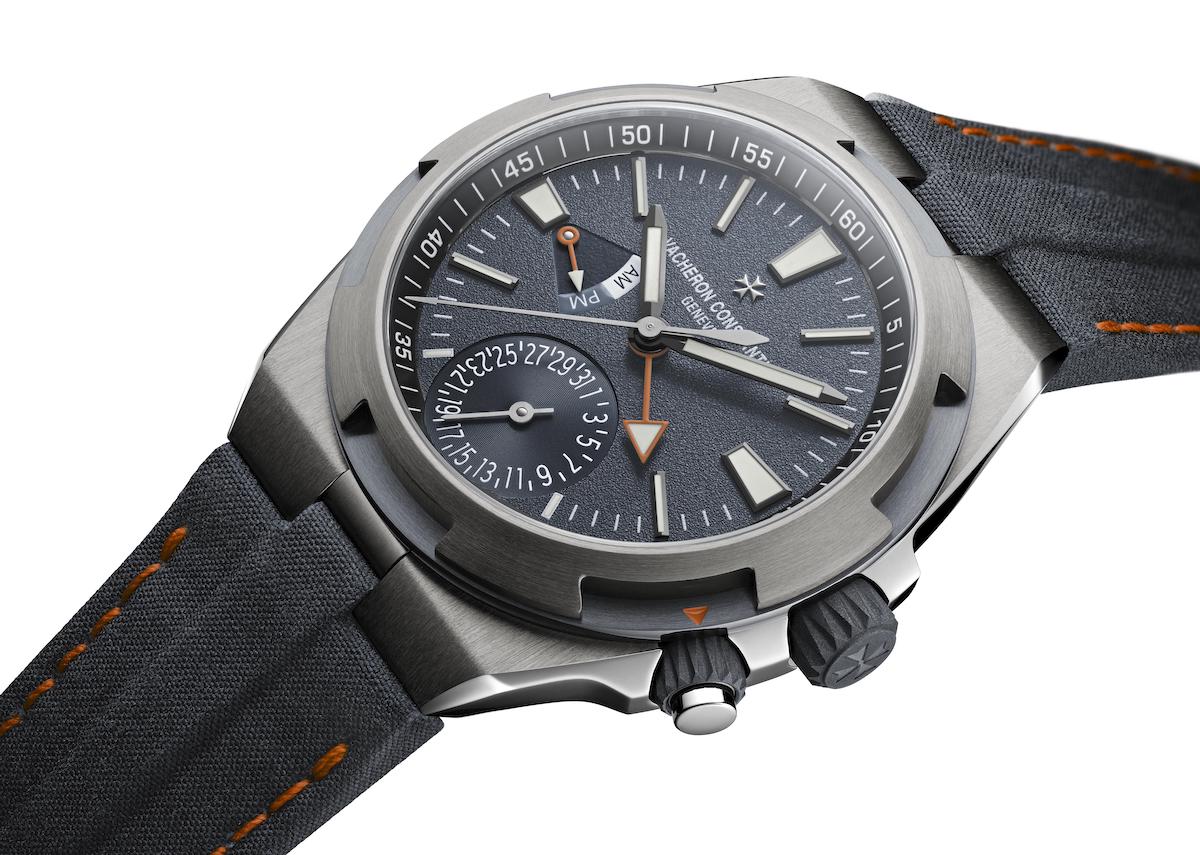 According to Richards, the dual time function means so much more to him than being able to tell time in another location.  “It is a connection to those at home, to everything I love. When I look at that dual time on the dial I think of home,” says Richards. “When we were deciding if we could keep going on Everest, I looked at that dual time and realized it was not worth going on. It was worth coming back for.” In short, he opted to live. “Thankfully we made that decision because the weather window was so short and by the time we were down, you couldn’t even see the top or where we had been climbing.”

For Vacheron Constantin, the idea was to develop the prototype by focusing on lightness and strength. The case is made in titanium and reinforced with ultra-hard tantalum integrated beneath the bezel. This marked the first time the brand worked with the titanium-tantalum material. The watch was equipped with a special strap created using a technical waterproof fabric known as Ventile(R). Throughout its making, the watch was subjected to stringent tests for magnetism, water resistance, and more.  To pay tribute to Richards and his passion and journeys, the artisans at Vacheron Constantin hand-engraved the oscillating weight — visible via a transparent caseback — with a depiction of the mountains based on a sketch drawn by Richards. 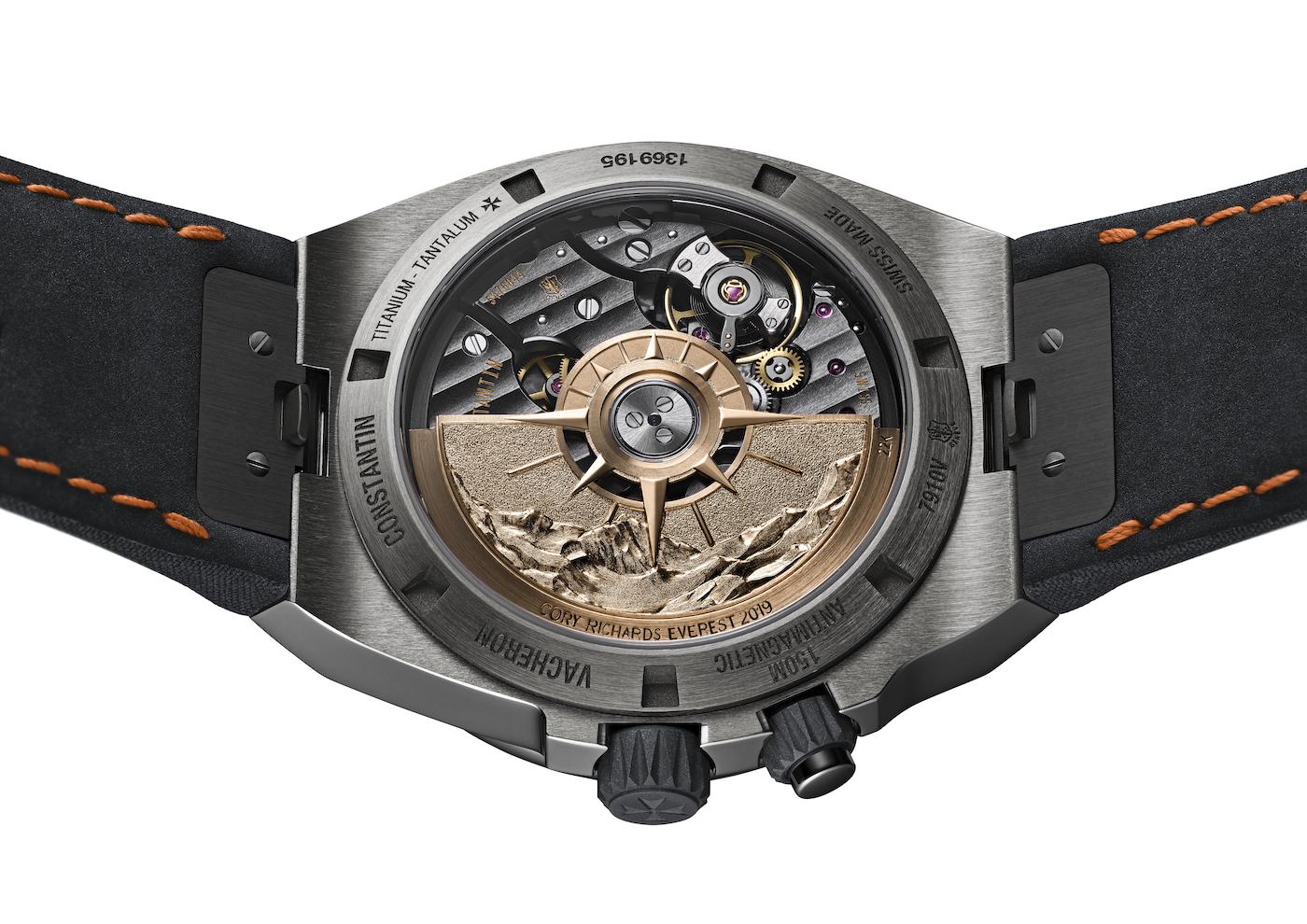 The rotor of the Vacheron Constantin Prototype watch made for Richards features a hand engraving of the mountains.

“When I told Vacheron Constantin that I wanted to climb Everest in a way that hasn’t been done before, they understood and explored the idea with me. They stand for refinement, reduction, craftsmanship, creativity, legacy, and those are values I try to live up to,” says Richards. He admitted that he was in an abusive situation as a child at home where his brother tormented him. He spent time in a behavioral health institute, from which he ran away enough times to end up homeless on the streets. Later in life he turned to alcohol for solace, only to later learn that wasn’t the answer. In short, Richards had a rough life, but he spent years in therapy and has found a way to turn every negative into a positive.

“I believe that the harder we try, we become better. The more we commit, the more we understand. If we take the time to understand where we came from in the world, we can understand who we want to be. Sometimes we see ugly things about ourselves, but it is all part of the growing process,” says Richards. 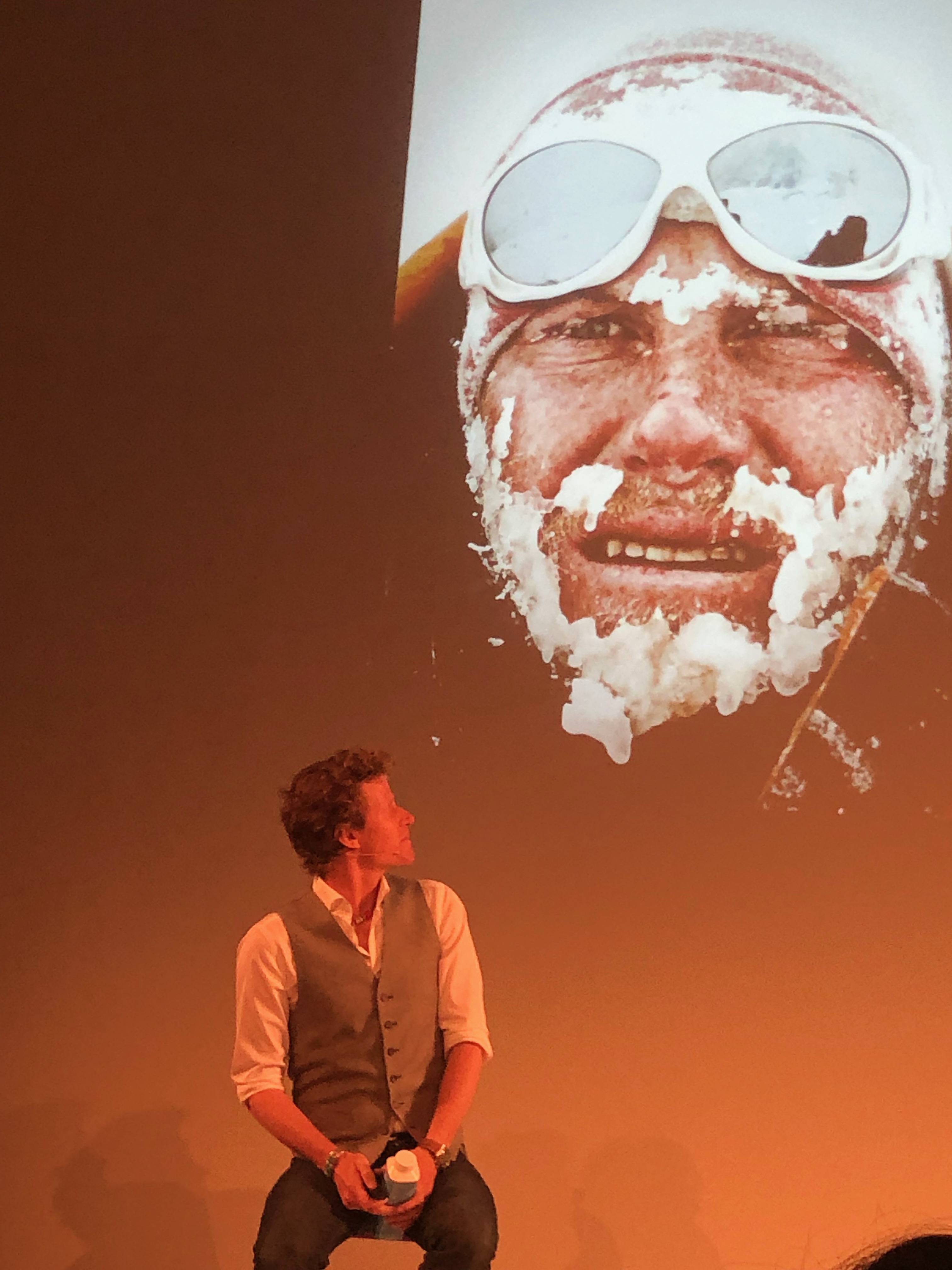 Richards just after being dug out of an avalanche many years ago.

While he is a photographer, a mount climber, an adventurer, the one thing I have gleaned from my few personal interviews with him is that he is incredibly introspective and has found a way not only to turn himself around, but also to put new and positive perspectives on experiences and events that could otherwise be detrimental to one’s mental health. He examines subjects such as belief, faith, creativity, collective communication and more — starting from the inside out. In short, he is a inspirational motivational speaker and  a philosopher who sees life through a different lens.

Photographs taken by Richards on this and previous climbs will be on display at Vacheron Constantin boutiques around the world later this year.”