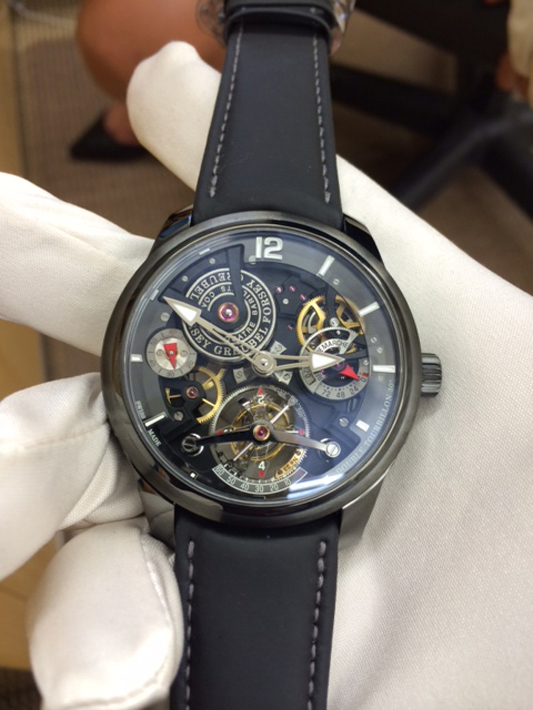 All of the pieces—for which I give my impressions below  — are water resistant to 100 feet, however given the rarity and value of these pieces I wouldn’t go swimming with one.  Additionally, all of the pieces have a strong presence on the wrist and while none of them will slide discreetly under your cuff, the elegance and craftsmanship in each is second to none. All said, I had the pleasure of seeing $3 million dollars’ worth of horological fire power that left this intrepid blogger in awe as to what it means to be a master craftsman, and why Greubel Forsey’s first 10 years is the beginning of a legendary journey.

The GMT in platinum 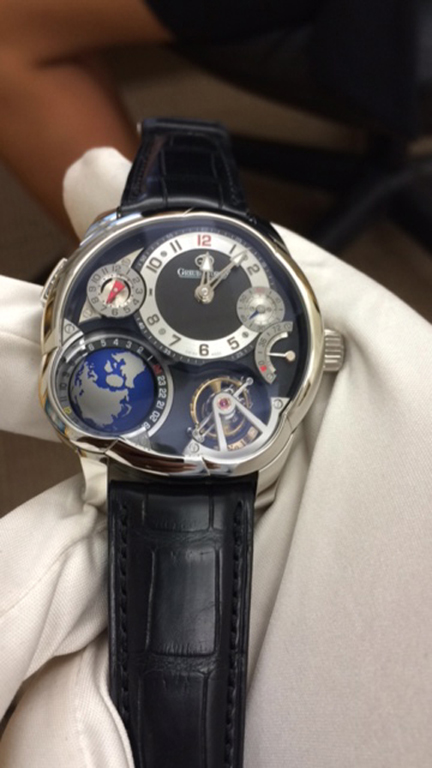 The GMT is Greubel Forsey’s first piece to feature a true complication. (A tourbillion is not technically a complication, but as stated earlier an innovation to increase accuracy.) The watch is awesome. Two items that catch the eye immediately are the titanium globe positioned at the 8:00 and the Double Escapement tourbillion at the 7:00 spot. The globe rotates completely every 24 hours and the second time zone is selected by using the pusher at the 10:00 position where you will also find the second time zone hour indicator.  As you cycle between destinations the hour will jump to the new time zone. The 24 city dial is located on the back of the watch.  A unique and straight forward feature of the dial is how they indicate areas that follow day light savings. For those that do not, the background of the printed name is shaded and for those that do there is none. Other features include a power reserve indicator at the 4:00, and a small seconds dial at the 3:00.  All of this comes in a 43.5mm case and for all this watch offers, it’s a steal — especially at the $630,000 retail price. 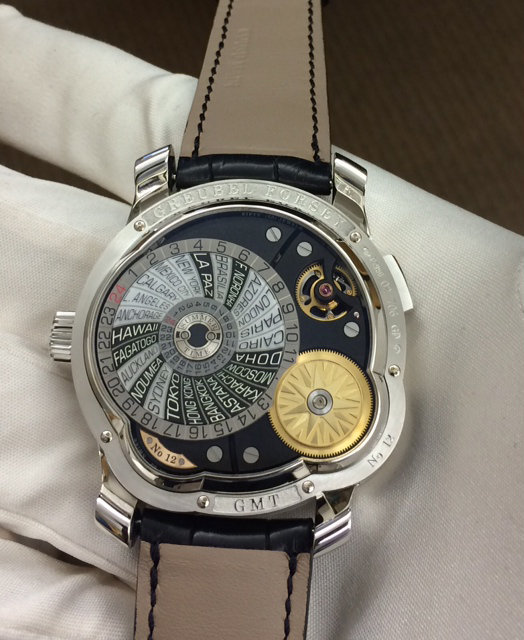 Back of the GMT Platinum

All of the pieces I was able to spend time with featured precious metals in either Platinum or 5N red gold, which aside from their beauty are also known for their heft and weight on the wrist.  The Double Tourbillon Technique ADLC was a refreshing change.  The watch is light, like super light.  The shock I felt was also amplified by the heft of the other pieces I was dealing with during my time with them.  The watch is composed of Amorphous Diamond Like Carbon (ADLC) Titanium.  The diamond nomenclature in ADLC is an indicator to the strength of the compound and it is known for its compressive hardness as well as its resistance to abrasive wear and tear. Another fun fact about ADLC is that the compound is also used in vehicles that are launched into and reenter earth’s atmosphere as its coating provides for extreme temperature resistance at both ends of the Kelvin scale.  If there is such a thing as a tourbillon watch priced north of $500k that is a daily beater, this is it. It retails for $560,000. Oh, and did I mention that it is super light which will offer little resistance when it comes to keeping your golf swing accurate. 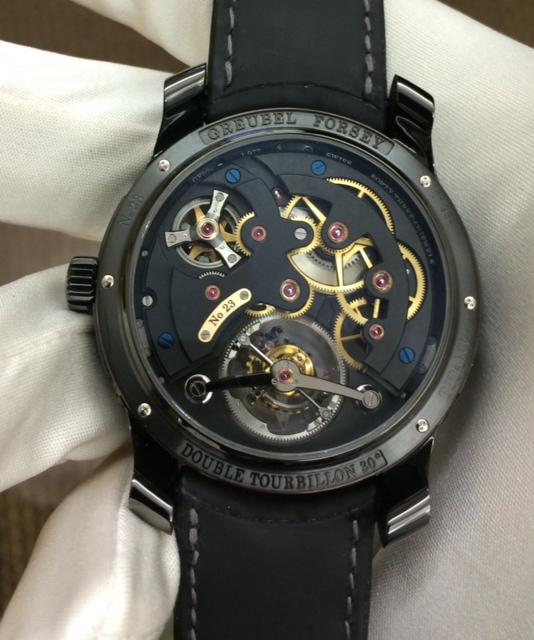 Back of Double Tourbillon 30 DLC 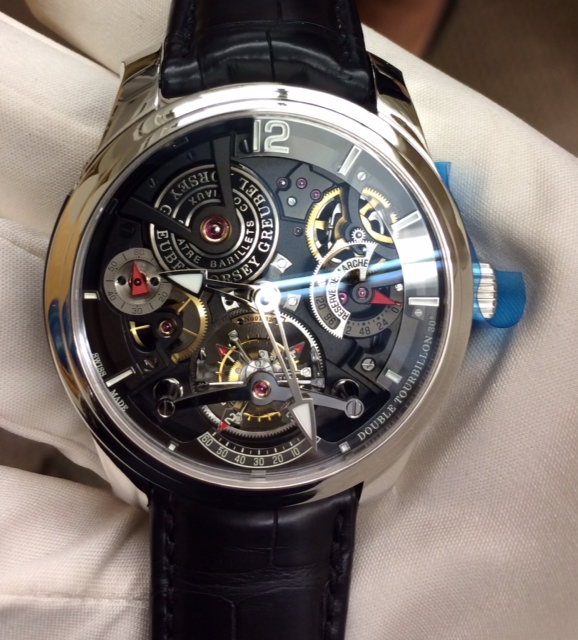 As stated in yesterday’s piece here,  Greubel Forsey bested all competitors at the International Chronometry Competition with the Double Tourbillon Technique, and while the exact reference that won was not available for me to go hands-on with, a timepiece featuring the same movement was.  Not only that, but I got to get all handsy with the first of 22 pieces that will ever be made in platinum.   Unveiled at SIHH 2014, the Double Tourbillon Technique Bi-Color  that I enjoyed reviewing is a re-imagination of the award-winning movement in new metals and color scheme. The heft of the platinum piece is immediately apparent once you take hold of it and as with all of the items I was able to experience, the watch is breath taking.  The watch offers a monochromatic theme as the platinum is juxtaposed against the black chrome coating.  The black chrome also provides a backdrop that allows the jewels in the movement to really pop from the background and further highlight the functional artistry of the piece. This is one of the larger models and comes in at 47.50 mm, but for the movement and the contrast, it could not be better. It retails for $620,000. 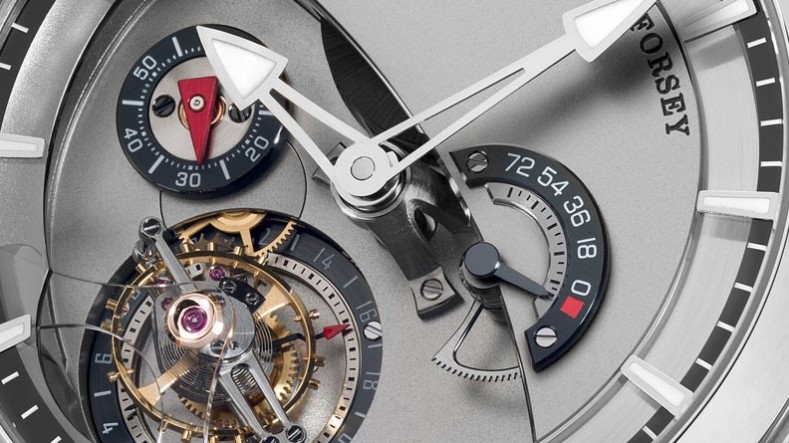 For the 24 Secondes Greubel Forsey has elected to use only one Tourbillon that rotates every 24 seconds and is angled at 25°.  The one I got to see in the flesh was finished in white gold and absolutely stunning.  The white gold version is a more subdued than the blue version released several years ago.  The tourbillon is supported via a transparent synthetic sapphire bridge which gives the illusion that the bridge is floating.  All said the more subtle aesthetics and diameter (43 mm) make for what could be the cleanest and approachable of the bunch.This watch retails for $470,000. 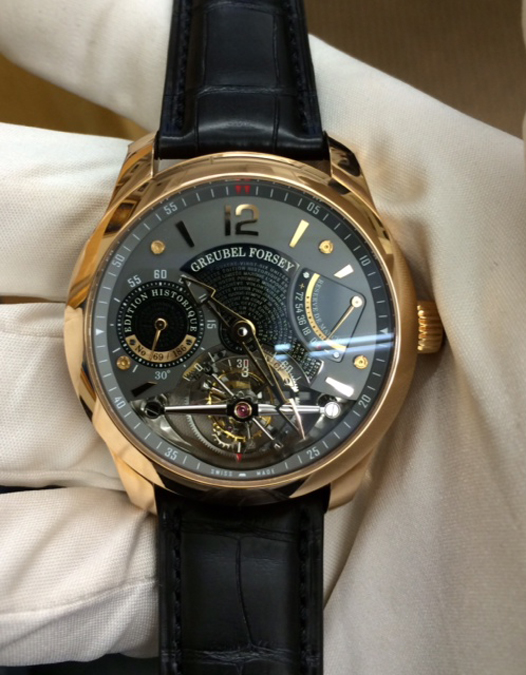 The Double Tourbillon 30° Edition Historique was first released four years ago, as a special reinterpretation of the Double Tourbillon  — commemorating the Double Tourbillon Vision. The Historique is the watch that won the prestigious Aguille d’or Grand Prix award in 2010.  The Historique was released with 11 pieces in platinum and 11 in 5N red gold, which was the version I was able to go hands-on with.  While the Historique  features the same award winning movement as the Double Tourbillon 30°,  there are some key distinctions in the Historique edition.  Unique to the Historique is that, along with the sides of the watch featuring engraving that extols the values of the creators, the engraving is now featured on the dial itself (similar to the Invention Piece 3).  From my impressions, this piece, more than the others I dealt with felt like a piece of artwork.  The writing on the dial, along with the beauty of the 5N red gold, have to be seen in person to really appreciate.  There is a wonderful geometry to the layout of the dial and there is a bit of triangulation at play.  The location of the power reserve indicator, the seconds indicator as well as the tourbillon make for a horological return to classicism.